A day after this film was released, we learned that the Sarawak government revoked the gazette that extinguished Native Customary Rights in the Baram Dam construction zone and reservoir and restored the land rights to the people of Baram. This means that the government has no claim on the land and cannot build the dam. Commenting on the move, Peter Kallang, the chairman of the grassroots network SAVE Rivers, said, “I congratulate the people of Baram for this great success and I pray that they will continue to fight for their rights and protection of the environment.. I hope that the chapter on Baram dam is now permanently closed.” Read the full press release here.

A few years ago when the Sarawak state government replaced headman James Nyurang of Lepo Gah Tanjung Tepalit, a small village in the Malaysian part of the island of Borneo, the reason was clear: They wanted a pro-dam leader of the village. Nyurang had been protesting the proposed Baram Dam, one in a series of 12 dams planned for Sarawak, along with many of his neighbors and friends since the early 2000s. Lepo Gah Tanjung Tepalit is one of 26 villages that would be inundated by the Baram Dam. 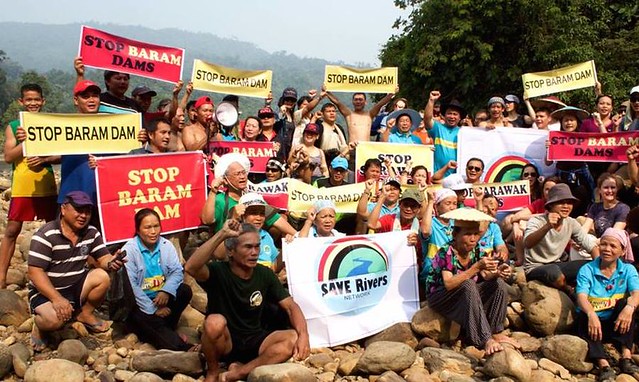 Photo courtesy of The Borneo ProjectThe residents of Lepo Gah Tanjung Tepalit village are installing a micro-hydro system and solar power system that will address their energy needs through renewable technology. Indigenous leaders from across the world gathered on the banks of the Baram River last year in a show of solidarity with the villagers.

The move didn’t go down well with the villagers. Instead of accepting the new headman, the villagers decided to ignore the government’s appointee and keep looking to Nyurang for guidance. After all, he was trying to ensure the village would not be underwater in a matter of years.

Sarawak officials had told villagers that the 1,200 megawatt dam would bring development to the area, but the people of Baram have seen the disastrous results of forced relocation from previous dam projects in the state, where promises of a better life never materialized.

So, rather than accept imposed living conditions, the people of Lepo Gah Tanjung Tepalit have made their own decision about their future, and it does not involve mega-development projects. Instead, they are installing a micro-hydro system and solar power system that will address their energy needs through clean, renewable technology.

The Borneo Project, an Earth Island Project that works to protect human rights and environmental integrity in Borneo has just released Development Without Destruction, a short film that highlights the many benefits of small-scale renewable energy systems in Sarawak. The documentary is the fifth and final film in a series of short documentaries exposing the realities of large dam development in the state. Development Without Destruction showcases recent studies on energy options for Sarawak conducted by the Renewable and Appropriate Energy Laboratory (RAEL) at the University of California, Berkeley. 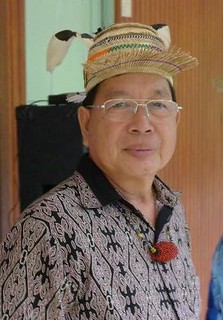 Photo courtesy of Caroline NyurangThe Sarawak government has replaced James Nyurang, who is
against the Baram Dam as the village headman, but
villagers are rallying behind him.

The research by the independent energy research facility concluded that the energy that would be produced from the 12 planned mega-dams is wildly excessive. Together these dams would produce more power than needed even to sustain aggressive industrial growth.

The mega-dam development plan assumes that Sarawak would have an energy demand growth rate of over 16 percent per year through 2030. That’s a gross overestimation. Even during the height of its industrial boom, China’s energy demand growth rate narrowly exceeded 10 percent for three years. Spending billions of public funds, destroying primary rainforest, and displacing indigenous communities in the hopes that Sarawak’s growth rate will be 160 percent of China’s peak rate is both irrational and irresponsible.

Furthermore, developing large dams almost never translates into electricity access for affected or upland river communities. Sarawakian villages that were displaced for construction of the Batang Ai and Bakun dams, for instance, do not have access to this energy. They are powered by dirty diesel generators managed by a subsidiary of Sarawak Energy Berhad — the government-owned energy supply company in charge of dam development. When families are unable to meet this monthly expense the company removes the fuses from their homes. As forced relocation has pushed these families into poverty, this unfortunate occurrence is all too commonplace.

Development Without Destruction is released during a moment of increased tension and media scrutiny on big dams globally. On March 3, Honduran Indigenous anti-dam activist Berta Cáceres was assassinated following a sustained campaign of harassment and threats attempting to stop her involvement in protecting indigenous and environmental rights. Two weeks later, Nelson García, another member of her organization, was killed after a violent eviction carried out by Honduran security forces.

Cáceres had visited the site for the proposed Baram Dam during the World Indigenous Summit on Environment and Rivers (WISER) last October when international indigenous leaders opposing dams gathered in Sarawak to build solidarity and community. WISER participants have issued a joint statement sent to Honduran embassies worldwide, urging the Honduran government to conduct a prompt, independent, and thorough investigation into Cáceres’s assassination, stop the Agua Zarca dam in Honduras, and provide human rights defenders with the necessary protection.

Watch the film in English below:

Development without Destruction from The Borneo Project on Vimeo.

For more information on the social, economic, and environmental effects of the dams visit the Borneo Project website.