It’s something that we all have in common, but most of us don’t know we have it. It’s passed from mother to child. It lingers in the soil. It can be found in the air. It sits at the bottom of lakes, oceans, rivers, and streams, waiting to be scooped up by a deep diver — a bottom-dwelling fish that carries it in its fatty tissues and passes it on to a hungry predator and up the food chain: Polychlorinated biphenyls, or PCBs, are everywhere, exposing everyone. Our toxic heritage spans the globe.

“There’s no level of PCB exposure that we can say has no adverse health effect,” says David Carpenter, who examines the dangers of PCBs as director of the Institute for Health and the Environment at the University at Albany in New York. “There may be a cycle over thousands of years where they may go away, but not in our lifetime.”

Some 53 million Americans live within three miles of a toxic Superfund site, according to the Environmental Protection Agency, which manages 1,857 of these sites around the country.

One site in New York’s Hudson Valley, the Dewey Loeffel Landfill, reflects just how difficult cleaning up Superfund sites can be, and how local ecosystems and communities living next to these sites continue to bear the toxic brunt of these sites for generations.

“This has been going on for decades,” Nassau Town Supervisor David Fleming, says of the contamination and its impact. “When you look at the whole site at Loeffel, you’re not talking about maybe 15 acres around the landfill. You’re talking about different impacts through the water table, tributaries, and other soil impacts that are over a thousand acres. It impacts more than just our community. “

From 1952 to at least 1968, before the EPA existed, companies like the General Electric Company (GE), Bendix Corporation, and Schenectady Chemicals turned a natural swamp in upstate New York into a dumping ground where they discarded waste, including chlorinated solvents, waste oils, PCBs, acids and bases, and scrap materials. 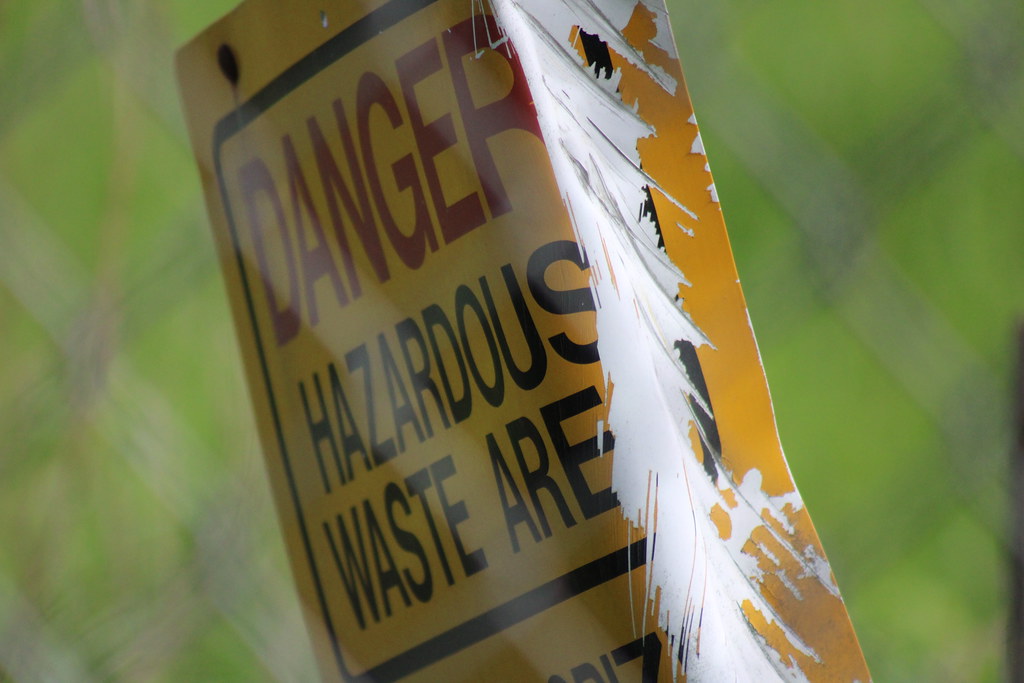 Inside a chain link fence, Danger-Hazardous Waste Area signs stand in the green grass that has grown over the manmade hazards buried below. Photo by Barbara Reina.

Transported in 55-gallon reusable drums, these hazardous waste materials were dumped into either an oil pit or a natural wet, marshy area described by the EPA as the “upper lagoon.” Unusable drums were left on the perimeter of the upper lagoon or the drum burial area and later covered with soil. Non-recyclable contents were pumped into the lagoon or onto the ground around the waterbody. Waste materials were burned during facility operations.

After almost 20 years of dumping liquid industrial wastes, Dewey Loeffel, the original operator of the disposal facility, indicated in 1970 that the former swamp was now devoid of plant and animal life. This natural lagoon turned dumping ground was later covered over with soil and converted to a landfill.

It didn’t take long for a list of citizen complaints to form: Uncontrolled fires at the dump site, downstream fish and cattle deaths caused by toxic poisoning, and groundwater contamination of some nearby private drinking wells.

“I’ve talked to a lot of families in that area — long-standing families that have had serious health issues,” says New York State Assemblyman Jake Ashby. “There’s no doubt in my mind that the contamination that we’ve found over there has played a role in that.”

As a major contributor of the contaminated wastes, approximately 37,530 tons, GE was ordered to remove 500 surface drums and four 30,000 gallon oil storage tanks from the site in the 1980s as part of a broader agreement with the New York State Department of Environmental Conservation (NYSDEC). But that didn’t end the problem. “They [GE and responsible parties] had the opportunity before the landfill was being capped to provide a complete remediation, removing the toxins from the site,” says Fleming. “Instead, they put a band-aid on a bullet wound.”

Since 1980, the NYSDEC and later the EPA orchestrated multiple cleanup projects to prevent further contamination from the landfill. One early project included constructing a slurry wall around the landfill with a clay cap to prevent contaminants from leaking from the site. But according to Fleming, the wall sits on fractured bedrock, which has allowed those contaminants to continue seeping into the groundwater. “This landfill is hemorrhaging,” he says.

Nearby, Nassau Lake, once described by a local newspaper as a “Little Lake George” for its recreation and fishing opportunities during its heyday, has felt the impacts of contamination. After years of discharges, the New York State Departments of Health and Environmental Conservation issued a consumption advisory for all fish due to PCBs in Nassau Lake, which continues to this day.

Now, many residents of Nassau have been working to connect the Superfund site to impacts on their own health, as well as the health of their pets and local wildlife. “The town has been trying for literally decades to get a health study done related to the impacts of the Dewey Loeffel Site, and that really has not happened based on a number of excuses from different agencies,” says Fleming. Although contamination has been detected in private wells near the site, Fleming says that the larger health impacts on this rural community have never been measured by a state or federal agency.

Unable to get an official study, residents of the town, along with the citizen advisory group UNCAGED (United Neighbors Concerned about General Electric and the Dewey Loeffel Landfill) put together a health survey that went out to residents in known affected areas in the 1990s. They created a pushpin map to document the results. “What came about from that pushpin mapping was the fact that there absolutely were clusters of cancer, related, we think, directly to Dewey Loeffel Landfill and the contamination,” says Fleming.

In the feedback from 100 responses of rural residents living closest to the site, 76 residents reported having a type of cancer. “It was common to have results [of] neighbors having the same type of cancer, pets who had the same types of cancer as their owners, as well as other types of diseases that were clustered in those areas,” Fleming adds.

In 2014, the EPA found an additional chemical, 1,4-dioxane, a known carcinogen, in a tank sample of contaminated water after treatment at the site.

Then, in 2018, the EPA began removing high levels of PCBs, in excess of 1,000 parts-per-million, from a tributary at the mouth of the Superfund site. “It’s a stream that you probably wouldn’t get your ankles wet in it if you walked in it, but it’s that contaminated,” says Fleming.

The EPA labels this unnamed stream “Tributary 11A,” but residents — frustrated, feeling their concerns continued unheard — have named it Little Thunder Brook. The name carries historical significance: In the 1840s, a resident named Frank Abbott, who called himself “Little Thunder,” led his neighbors in protest of high rent. Residents have recalled the name in a similar stance against pollution. Little Thunder Brook connects to lakes and streams leading to the Hudson River.

Aside from the contamination and threat to public health, locals have also felt the financial burden of living next to a Superfund site: the devaluation of their land. In 2019, Ashby proposed a bill to provide annual reimbursement of lost tax revenue for properties affected by the Superfund site. If passed, reimbursement would continue until the site has been removed from the list of state hazardous waste sites. The bill has not yet made it to the floor for a vote.

Local discussions between the Community Advisory Group (CAG) and the EPA have slowed down somewhat as everyone took time to shelter in place and deal with the coronavirus pandemic. A March 2020 CAG online meeting was run using audio only with slides from the EPA shown separately, since, at the time, most local CAG members did not have the technology or the internet bandwidth to be tied into both audio and video in one connection. During the pandemic, the CAG continues to have meetings by Zoom, sometimes with EPA representatives, to discuss potential technologies for remediation at the Superfund site, monitoring of the groundwater, and cleanup of Little Thunder Brook.

At the Superfund site today, contaminated water from the landfill is treated and discharged into a nearby stream called the Valatie Kill and sent downstream. Inside a chain link fence, Danger-Hazardous Waste Area signs stand in the green grass that has grown over the man-made hazards buried below. Nassau Lake is quiet. Along the lakefront, homeowners watch the sunset.

As if released from Pandora’s Box, our toxic heritage continues. Hope remains.

Barbara Reina is the writer/filmmaker of the documentary Love Canal X 2: A Landfill Dilemma in Nassau, NY currently in production and tentatively set to be released in the spring of 2022.