As people grow increasingly concerned about reducing their carbon footprint, a natural byproduct of greener lives is greener exits. That’s where the fledgling green burial industry comes in, catering to the millions who don’t want pollution to be their postmortem legacy. From bicycle hearses to biodegradable urns to burlap sacks, this booming new biz is spurning an end-of-life revolution. 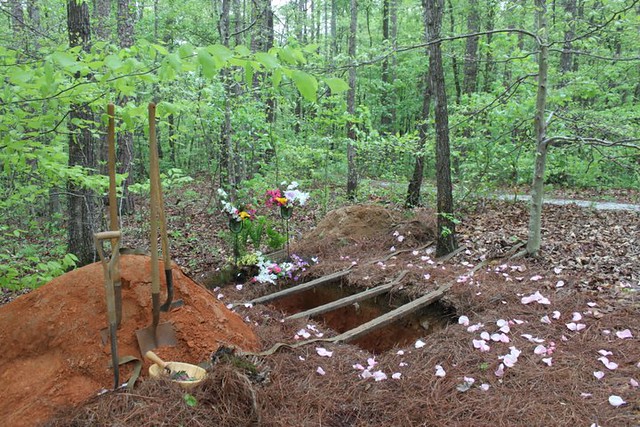 Eco-burial options offer an alternative to standard western practices. Of the roughly half of Americans who opt for burial, the process often involves injecting the body with formaldehyde and other solvents to slow decomposition, placement in a wood or metal casket, and a final resting place in a plastic-lined concrete. In a single year, burials in the US require felling of some 30 million board feet of wood for caskets, 90,000 tons of steel, and 800,000 gallons of embalming fluid. Cremation, too, comes with it’s own downsides, resulting in emissions of dioxin, hydrochloric acid, and carbon dioxide, among other substances.

Those in the green burial industry see a different path ahead, one that is less resource intensive and pollution-heavy. One that allows families to be involved in the end-of-life process, and that provides varied choices regarding how and where loved-ones are laid to rest, whether in the middle of the woods or the deep sea.

Sarasota, Florida-based company Eternal Reefs, for example, gives new meaning to the idea of being “one with the ocean.” Founded in 1998 by college friends and avid scuba divers Todd Barber and Don Brawley, the company mixes the ashes of the dearly departed with environmentally safe concrete to create “reef balls,” the foundation for artificial reefs. Eternal reef then casts these burial reef balls into the sea. The porous, pod-like structures, which can be adorned with a small plaque, as well as handprints and messages from loved ones, help marine environments thrive and create natural resting places teeming with life.

“It’s the best of both worlds,” Barber said. “You’re not taking up land, which is a precious thing, and you’re eternally nourishing marine life.”

Barber explains that for “a culture that loves options,” alternatives to mainstream burial practices are especially appealing. They can also simply make more sense. Graves require maintenance after all, and with families scattered (and nuclear families no longer the norm), reef balls can help loved ones avoid the added work, and often the guilt, associated with caring for burial grounds.

Eternal Reefs CEO George Frankel explains that the process is designed “to heal the heart and the sea,” which is why the company involves family members as much as possible in the reef ball process.

“When I dealt with my own relative’s deaths, I felt powerless as a third party,” Frankel said. “You want to do something, and by virtue of having families involved and personalizing the reef balls, they get invested. The reef becomes a tribute made with their own hands. There is an unbelievable sense of contribution and accomplishment.”

While Eternal Reef’s domain is the sea, Memorial Ecosystems is a pioneer in eco-friendly burial practices on land, the “turf” to Eternal Reef’s “surf” in the conservation memorial business.

Memorial Ecosystems, founded by Dr. Billy Campbell and Kimberly Campbell, opened the first “green” cemetery in the country, Ramsey Creek Preserve in Westminster, South Carolina in 1998. For Memorial Ecosystems, a green cemetery means “dust to dust burials, no toxic embalming fluids, no vaults and only biodegradable caskets,” according to their website. Even stone markers must be natural to the area, and employed in a way that enhances ecological restoration. Kimberly Campbell says that since the cemetery’s founding, green graveyards have been established in Atlanta, Ohio, New York, and North Carolina, where they help preserve and restore significant wildlands. (Read the Journal’s recent feature story on the ecological role of cemeteries, “In the Shadow of Death.”)

Campbell paints a picture of Ramsey Creek Preserve for me: Families mold the earth over the casket of a loved one, fully immersed in the sights and sounds of nature. A butterfly touches down on the casket; a hawk soars overhead. The clean air fills their lungs as they feel a sense of realness, of incredible calm and peacefulness.

“Graveyards by the side of the road can seem stagnant and not really align with people’s values,” Campbell said. “At Ramsey Creek, people like to walk around, have a picnic, walk the dog. The graves blend in with the landscape so they’re overwhelmed by the presence of life rather than death.”

Campbell, too, sees a true value in helping families feel more in control over the uncontrollable. “The process in a more natural setting is astoundingly moving, and it’s so real. Grieving families are typically emotionally exhausted and overwhelmed. So to have this quiet beautiful place and help by even putting the earth on the grave, it’s calming,” she says.

Memorial Burials isn’t the only company working on natural land-based burial options. For those who want to return to earth as literally as possible, innovative architect Katrina Spade may be able to assist: Spade is currently working with soil scientists to perfect a new method that essentially turns human remains into compost.

The Seattle, Washington-based founder of the Urban Death Project envisions one-of-kind-facilities in overcrowded urban centers that serve as part funeral home, part place of memorial, and part public park. Bodies would be placed in industrial-sized compost centers within these facilities, and turned into fertile soil via a process called recomposition. (Again, family participation is vital, as relatives would help lower the body onto wood chips in the composting center.)

Spade is working to create the right environment so that nature can do what it does best: break down the body. She mentions The Lion King’s circle of life, and western culture’s fear of it — specifically the part that deals with decay and decomposition. But while we may be hesitant to acknowledge our future reality of rotting, it’s truly the basis for all life.

Recomposition embraces the process with the right ratio of carbon and nitrogen, plus enough oxygen to maintain aerobic conditions so the body can break down quickly. “Our bodies are high in nitrogen, woodchips are carbon, so this system includes us covering the body with wood chips and aerating it to provide oxygen to all the little critters. It’s a cool, beautiful process,” she explains.

Spade also touches upon the aspect that conventional burial is simply not meaningful to many anymore, with its embalming fluid and concrete grave trappings.

“It struck me that the last thing I’d do on the planet is pollute it,” Spade said.

Currently, the Urban Death Project is raising money to build a prototype, and hopes to begin construction as early as this spring at Washington State University. Once finished, the goal is to have facilities in cities across the US so people can come have a memorial service and then those who have died can recompose in the communities where they’ve lived.

“The ceremonies will allow families to have deeper participation in the process, helping our loved ones return to earth,” she says. “It’s odd that we got ourselves to a point where we feel so disconnected from the process.”

Campbell echoes these feelings about the current disconnect, emphasizing that bodies don’t need to be embalmed, that it’s an industry myth, attempting to make death shiny, clean, and perfect. “But life’s not like that, so why should death be?” she asked.

As the eco-friendly death care movement picks up steam, will the detached American view of death evolve with it?

With the explosion of options that render individuals and families active participants, the answer seems to edge toward “yes.” In Conyers, Georgia, a green grave site allows future customers to save $500 by digging their own grave, adding an empowered new dimension to the process. Inquiring minds can find DIY biodegradable pine coffin kits on the market that double as a bookcase (and in-your-face reminder of mortality) while you await the imminent end. And in Los Angeles, California, Undertaking LA offers hands-on “do your own death” workshops to encourage family involvement in end-of-life planning.

As Frankel says, “The concept of conservation burial is the future, and it’s where memorialization is going in this country.”