Move could be an industry game-changer
Hanna Morris

In hindsight, “good” ideas often fail to meet expectations. A 1980s-style perm, the 2013 Baz Luhrmann production of The Great Gatsby and, though still under intense debate, the exhibition of captive dolphins.

In May, John Racanelli, CEO of the National Aquarium in Baltimore, announced in an open letter that the aquarium is in the midst of some soul searching about the future of its captive dolphin exhibit. “We will host a summit to convene animal care experts, veterinarians, and biologists to determine the feasibility of a variety of potential solutions, including designing and building a dolphin sanctuary in an ocean-side setting and exploring in detail the requirements for operating such a facility,” Racanelli wrote. 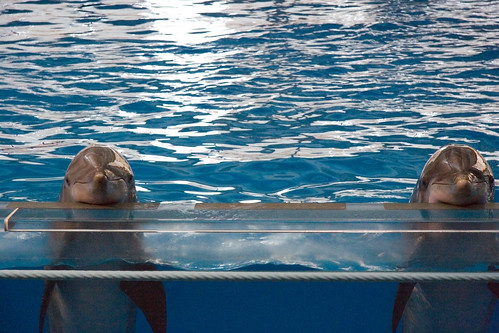 photo by Lance McCord, on FlickrDolphins in the National Aquarium in Baltimore, Maryland

Although the National Aquarium has not definitively announced the release of its dolphins, aquatic entertainment parks such as Sea World are already feeling the heat. “If the National Aquarium takes this step and releases their dolphins into an ocean sanctuary, there will be a huge intensification of pressure on Sea World to do the same,” says David Phillips, executive director of Earth Island Institute’s International Marine Mammal Project. “This would be a game changer for sure.”

Popular films such as Blackfish and The Cove have illustrated to millions of people the harmful psychological and physical stress endured by captive whales and dolphins. This growing public awareness has prompted the National Aquarium (as well as aquariums across the country) to rethink the educational and financial merits of exhibiting captive dolphins.

“These entertainment parks have no place in the twenty-first century. We know the level of awareness these animals have,” says Rachel Carbary from the activist campaign Empty the Tanks Worldwide. “These are incredibly social, intelligent beings that are being used to make money. It is animal slavery. I do think that the attitude towards this issue has changed greatly over the past few years. I think it has a great deal to do with the fact that marine mammal captivity is finally being talked about.”

The National Aquarium has taken note of this shift in public opinion. “We have experienced a significant evolution in the audience we serve: it has become younger, more concerned about the health of our planet, and less willing to simply accept the same way of doing things,” Racanelli stated in his May open letter.

This impetus for change from within the industry itself, Phillips says, is a significant step forward. “It’s not like the push for aquarium reform and release of dolphins is just coming from the radical fringes like PETA anymore. The fact that a similar agenda and call for reform is coming from a big industry player like the National Aquarium is huge.”

The National Aquarium has been making a gradual move away from Sea World-style dolphin entertainment. In 2011 the aquarium cancelled its dolphin shows, a move that cost the non-profit institution about $1.9 million in annual revenue. CEO Racanelli realized that if entertainment-based dolphin performances were no longer offered, something new was needed.

So the aquarium developed a dolphin exhibition it coined “Dolphin Discovery.” Dolphin Discovery allows visitors to observe trainer and dolphin interactions from an open pool. All interactions are focused on educating visitors about common dolphin behaviors such as porpoising and lob-tailing. “It’s been very stimulating and positive for the dolphins. And people’s overall satisfaction has gone up,” Racanelli told National Geographic in a recent interview.

Moving the eight dolphins from the small, enclosed pools at the aquarium into a natural marine setting would be a more complicated matter. Full reintroduction of the dolphins into the wild is seen as infeasible. Seven of the eight dolphins were born in captivity (the eighth was captured while very young), which means that they don’t know how to hunt in the wild. It’s likely the dolphins would be relocated into a large sea pen, where they would still rely on human care and feeding. The location of such a pen is also an open question. The dolphins will need to live in waters warmer than those in the Baltimore harbor, which means aquarium visitors would no longer have interactions with the animals.

In an effort to best understand how to maximize both animal and visitor wellbeing, the National Aquarium has announced its intent to conduct an extensive organizational revamp. The up-and-coming architecture design firm, Studio Gang Architects, and market research consultants, IMPACTS Research, are advising the National Aquarium on this reinvention project entitled, “BLUEprint.”

“A key part of the BLUEprint inquiry is to identify the core elements of this desired future state [for the Aquarium] and map out the steps it will take to attain it,” Racanelli wrote in his letter about the aquarium’s future.

David Phillips is optimistic about the National Aquarium’s approach. “Their BLUEprint plan could show that modern aquariums do not need to rely on dolphin shows and captivity to be successful.”

In fact, aquariums may be even more successful without dolphin and whale captivity. “Take the case of Keiko,” Phillips says, “he was the whale who played Free Willy in the film. When we were able to move him into an ocean sanctuary, even more people came to see him than when he was held in a tank.”

Some community members are, however, apprehensive about the relocation of the dolphins. “The issue isn’t black and white,” says Jordana Diehl, a former National Aquarium dolphin trainer. “I’ve been struggling with what’s the right thing to do for a while now. But, I’m a witness to people walking into the amphitheater gasping and crying after seeing a dolphin for the first time. For city kids, who oftentimes don’t get an opportunity to see dolphins in the wild, this may be their only ‘aha’ moment in terms of understanding why ocean conservation is so important.”

Diehl is, nonetheless, optimistic that the community will support the National Aquarium’s decision, whatever it may be. She stresses that first and foremost, the health of the dolphins must take precedence. “Keeping dolphins in Baltimore solely for human purposes would be wrong. Moving the dolphins to a sanctuary solely for people to feel better would be wrong. The common theme here is that the animals’ health takes utmost priority, human feelings and desires about them should come only second, at best.”

Although the debate over dolphin captivity continues to divide opinion, the National Aquarium’s potential release of its eight bottlenose dolphins may push forward a new industry standard. The full announcement of the National Aquarium’s BLUEprint plan is scheduled for the end of this year, with much anticipation from both conservation and industry leaders alike.

“This decision,” Phillips predicts, “could mark the precipice of a new era for aquariums within the United States.”