The right to farm. It sounds innocuous enough. Shouldn’t we all have some right to farm if we want to? Probably, but that isn’t exactly what Missourians were getting at when they passed a constitutional amendment this summer to protect the right to farm. 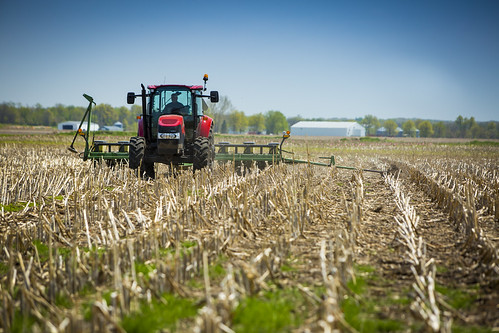 The amendment, known as Amendment 1, or the “right to farm” amendment, guarantees Missouri citizens the right to “engage in farming and ranching practices.” It seeks to protect farming operations from new laws, such as anti-GMO legislation or animal welfare regulations, that would change or ban practices that Missouri farmers currently used.

Amendment 1 passed by a slim margin; so slim that there was a vote recount in September. After all the ballots were counted, and recounted, the measure passed by 2,375 votes out of nearly a million ballots cast. As the tight margin suggests, the amendment stirred up quite a bit of controversy, not to mention confusion, in the state, embroiling family farmers, big ag, animals’ rights advocates, and GMO activists.

Amendment 1 opponents worry that the vaguely worded law will give industrial agriculture the upper hand when it comes to farming policy and regulation in the state, easing the way for large-scale farms to dominate Missouri’s landscape. They are also particularly concerned that the measure will be used to challenge existing and future animal welfare regulations and environmental measures, including confinement conditions for hogs and poultry, limitations on puppy farms, pollution controls, and potential GMO labeling laws. The amendment, they say, will hurt smaller-scale family farms.

Photo by CAFNR The right to farm amendment may be used to challenge animal welfare regulations.

“What I expect is that this sort of greases the shoot for corporate agriculture in Missouri,” says Richard Oswald, President of the Missouri Farmers Union. “It’s not going to be a dramatic change, it’s just going to more of the same, with more and more takeover of what used to be things that independent family farmers did.” Oswald believes it will also “nullify those family farmer friendly statutes that we already had on the books that did help protect agriculture,” and will ease the ongoing “takeover of the hog and poultry markets” by agricultural giants.

Opponents are also concerned that the amendment will open the state up to foreign interests, citing Smithfield Foods, owned in part by Chinese corporations, as proof that Missouri family farmers are already vulnerable to outside interests.

But not everyone agrees. Blake Hurst, a farmer and president of the Missouri Farm Bureau, an organization that’s a well-known supporter of big ag operations, believes that Missouri needs protection from environmental advocates trying to attack current farming practices in the state, particularly from outsiders coming into the state to shake things up.

Many Amendment 1 supporters also claim that the measure is meant to protect all types of agriculture, not to favor one farming model over another. However, in practice, it is difficult to see how that is possible. As Laurie Beyranevand, associate professor of law at Vermont Law School and associate director of the Center for Agriculture and Food Systems, says, “it is hard to protect all forms of agriculture at the same time.” Not to mention the fact that corporate giants like Cargill, and large agricultural associations like the Missouri Corn Growers Association and Missouri Cattlemen’s Association, threw their support behind the amendment. (A similar effort is underway in Hawaii, which has become a battleground for the fight over genetically modified crops. In January, legislators introduced two bills seeking to amend the island state’s Right to Farm Act in order to prevent its counties from passing any laws that limit the rights of farmers “to engage in modern farming and ranching practices,” though neither bill passed. Read about it here.)

At this point, though, it’s all speculation. Like many constitutional amendments, the text of Amendment 1 is vague. In fact, the amendment is just two sentences long, and the heart of the law is contained in just a few lines: “[T]he right of farmers and ranchers to engage in farming and ranching practices shall be forever guaranteed in this state, subject to duly authorized powers, if any, conferred by article VI of the Constitution of Missouri.” Until the right to farm — whatever that comes to mean — is challenged in court, it is impossible to know what the impact will be at either the state or local level.

“I feel like the way [the amendment] is written is really unclear, so I think it is difficult to say that there is a specific way it is supposed to work,” says Beyranevand.

Beyranevand points to theoretical GMO legislation as an example. “It would be hard to say how that [legislation] would be handled by the courts based on the amendment, because you would be consciously trying to protect one type of agriculture and excluding another, and I don’t think the amendment is clear about how those types of situations should be interpreted or handled by the courts.”

It is this very vagueness in Amendment 1 that has opponents like Oswald worried. “When we first saw the amendment we thought, I personally thought, there was more to it than that,” he recounts. “What I saw was very vague, very imprecise, very open-ended… And we are very concerned about that, because rather than the citizens, it will be the courts deciding what this is.”

Nor can Missourians look outside the state for an indication of how things might play out. North Dakota is the only other state with a similar right to farm amendment, but it hasn’t yet been tested in court.

And while all 50 states have some form of right to farm statute on the books, the intent and impact of these existing laws differ significantly from Amendment 1. Rather than protecting the method and manner of farming, current laws generally protect farmers from nuisance lawsuits by irritated neighbors. “This [amendment] seems to be trying to accomplish something much different than what those [laws] are attempting to accomplish,” says Beyranevand. “And a lot of those [right to farm statutes] are limited and they have specific provisions that say if the farmer isn’t keeping up with accepted agricultural practices or good agricultural practices then people can sue them anyways.”

The Missouri Farmers Union, concerned about funding, was hesitant to bring a lawsuit challenging Amendment 1. “We doubted that we would have the money to fight that fight one more time… knowing full well that we were up against some pretty big corporations and corporate producer groups that have deep pockets and plenty of money to spend,” Oswald says.

Despite these hesitations, last week Oswald filed a lawsuit challenging the measure in the Missouri Supreme Court. The lawsuit, led by Wes Shoemyer, president of Missouri’s Food for America and a former Democratic state senator, and joined also by Darvin Bentlage, Missouri Rural Crisis Center board member, alleges that the language on the ballot summary misled voters by stating that the amendment would protect the rights of “Missouri citizens,” when in fact it will protect all farmers, including foreign companies.

If successful, the lawsuit could force a re-write of the amendment, as well as a re-vote. The court has not yet scheduled the case, but Oswald hopes it will be heard by the end of this year.