For all practical purposes the [Cumberland Plateau] has long constituted a colonial appendage of the industrial East and Middle West, rather than an integral part of the nation generally. The decades of exploitation have in large measure drained the region.
— Harry M. Caudill, author, historian, lawyer, legislator, and environmentalist from Letcher County, in the coalfields of southeastern Kentucky (May 3, 1922 – November 29, 1990)

The United States Bureau of Prisons is trying to build a new, massive maximum-security prison in the Appalachian mountains of eastern Kentucky — and there’s a growing movement to stop it. 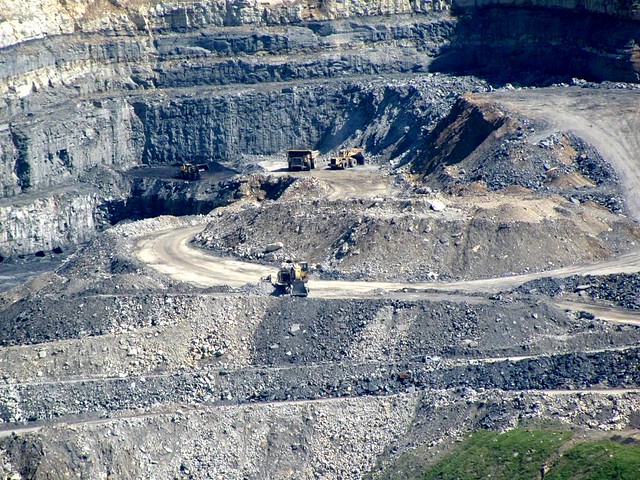 Photo by Universal Pops/FlickrA mountaintop removal mine in Wise County, Virginia. The federal Bureau of Prisons wants to build a prison over a similarliy strip-mined parcel of land in neighboring Kentucky which is still being drilled for gas, and which is located amid a habitat for dozens of endangered species.

The prison industry in the US has grown in leaps and bounds in the past 20 years— a new prison was built at an average rate of one every two weeks in the ’90s, almost entirely in rural communities. As of 2002, there were already more prisoners in this country than farmers. The industry seems like an unstoppable machine, plowing forward at breakneck speed on the path that made the world’s largest prison population.

Today, about 716 of every 100,000 Americans are in prison. Prisoners in nations across the world average at 155 per 100,000 people. And in the US, Southern states rule the chart. Viewing these states as countries themselves, Kentucky ranks at lucky number seven.

“Sounds terrible…” you may be thinking, “But what does it have to do with the environment?”

Well, this seemingly impenetrable multi-billion dollar bi-partisan government-driven industry does have a weak point: it’s a well-verified ecological mess. For a 10-year period of the Environmental Protection Agency’s Prison Initiative, prison after prison that the EPA’s inspected in the Mid-Atlantic region was plagued with violations. Violations included air and water pollution, inadequate hazardous waste management and failing spill control prevention for toxic materials.

From the initial breaking ground on construction in rural and wild places to the inevitable sewage problem from operating chronically over-populated facilities — running a prison is dirty business. And when you factor in the plethora of environmental justice issues facing the prisoners, disproportionately low-income and people of color, it becomes an outright nightmare.

Knowing this, it should come as no surprise that the Bureau of Prisons’ latest plan for a new maximum-security federal prison is on a former mountaintop removal coal mine site, which is still being drilled for gas, and which is located amid a habitat for dozens of endangered species. Where else but Appalachia?

The proposed half a billion dollar facility is to be located in Kentucky’s Letcher County. If built, this would be the fourth new federal prison in eastern Kentucky, and the sixth federal prison built in Central Appalachia, since 1992, making the region one of the most concentrated areas of prison growth in the country.

In March of this year, the Human Rights Defense Center’s new Prison Ecology Project joined the fight against the proposed prison. So far, opposition to the Bureau of Prison’s plans have been led primarily by the statewide grassroots nonprofit Kentuckians for the Commonwealth (KFTC), which is opposed to “prison expansion as a form of economic development.”

The prison industry and its proponents say the prison will bring jobs and economic growth to Letcher County, which is one of the many regions in eastern Kentucky suffering from the decline of the coal industry. But past studies have shown that new prisons do not improve the local economy and in most cases appear to harm rather than benefit host communities. That certainly seems to be the case in Kentucky’s McCreary, Clay, and Martin counties.

In 2013, when the Bureau of Prisons began seeking public input about the project, KFTC outlined a series of questions and concerns, including questions about the projected economic benefits, the stability of the reclaimed mine site, and possible environmental impacts of the new prison. In its statement to the bureau the KFTC said: “It’s clear we need economic transition in our county and region, but history shows that prisons have not provided that. And, when we talk about transition, we desire a transition that is equitable to all people, not just those at the top.”

But when the Draft Environmental Impact Statement for the project was released earlier this year, it was clear that these concerns had fallen on deaf ears. In fact, the Bureau of Prisons went so far as to state that “scoping comments were in support of the project with no major issues or concerns raised.” (Emphasis added.)

Luckily, attorney and criminal justice activist Stephen Raher was among those who filed comments in 2013. A former co-coordinator of the Colorado Criminal Justice Reform Coalition, Raher has been tracking environmental issues related to the Bureau of Prisons facilities for over a decade. Perhaps the flagrant disregard for his input added some fuel to his fire, because Raher then spearheaded a comment on the Letcher proposal that carried a passion rare in the world of administrative legalese. Leading with the quote by Caudill mentioned above, he tore into the Bureau of Prisons for taking advantage of the people and land of Appalachia with a new form of industrial exploitation:

“The EIS announces BOP’s plans to continue with a new type of extractive activity. BOP’s proposed project would take 1,200 prisoners, extracted from their homes and neighborhoods, and import them into Letcher County. Despite the EIS’s glib promises of employment and economic activity, Letcher County and surrounding environments would be forced to absorb the substantial environmental consequence.”

Raher and HRDC staff co-authored the comment, which was signed by individuals and organizations from across the country. The Bureau of Prison’s charade of full support was blown.

The comment highlighted regional water quality records which show a history of water contamination from sources that would provide water to the prison, including heavy metals associated with mining as well as fecal coliform from defective septic systems. It also noted heightened presence of radon in the area, which often associated with coal and gas extraction.

Additionally, the comment noted that the Bureau of Prisons indicates intent to build an e-waste recycling factory run on prison labor on the site, but provides no information about how it will deal with the hazardous waste that these facilities have a history of creating.

None of these concerns seemed to slow the Bureau down — If anything, the opposite. The agency turned its draft Environmental Impact Statement into a final EIS in record speed. By mid-summer, it was ready to plow forward with the project, once again ignoring essentially every concern brought forward. Now, the agency is rounding the final corner of the federal permitting process for the 700-acre project expressly aimed at reducing the Bureau of Prison’s overpopulation problem. The agency’s facilities nationwide have been operating at 51 percent over capacity.

The 1,200 people moved to this new facility from other overpopulated prisons would end up hundreds of miles from most of their home communities with no mass transit options, making visitation an extreme hardship for their families. It’s this reality that’s earned central Appalachia, simultaneous home to the nation’s most biodiverse ecosystem and poorest rural economy, the title of America’s own Gulag Archipelago. 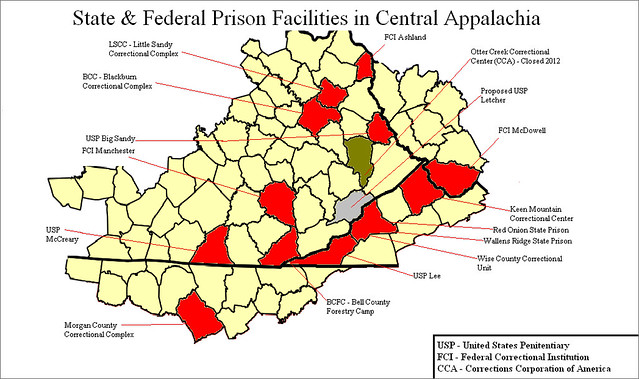 On July 31, the agency announced — via US Representative Hal Rogers’ office — its preferred site for the prison and the release of its Final Environmental Impact Statement. (Sadly, a majority of this document’s 800+ pages are taken up by letters from the local economically depressed post-coal community begging for prison jobs.) There is now a very short window of time left for public comments on the project. On August 31 the Bureau of Prisons will be closing the record on public input and making a final decision on the plan.

In the Final EIS response to environmental justice concerns raised, the Bureau of Prisons stated that it “does not concur with the assertion that federal inmates of mixed backgrounds (as to ethnicity, race, and income) to be housed in the proposed facility constitute either a minority or low income population for the purposes of EO12898, the President’s 1994 Executive Order on Environmental Justice. Nor that adverse health effects could result from living on top of a former mine site. The agency, however, provided no data on demographics, which is readily available from reputable sources such as the Prison Policy Initiative, nor on documented long term health concerns related to mountaintop removal mining sites.

The Prison Ecology Project is also opposed to the project on conservation grounds. As it outlined in a letter to the Kentucky Department of Fish and Wildlife commissioner, which was also signed by the Center for Biological Diversity:

This project could adversely impact 71 species known to live in Letcher County and recognized as threatened, endangered, or of special concern in Kentucky. This includes the Kentucky red-backed vole, sharp-shinned hawk, American black bear, eastern red damsel, mountain midget crayfish, and Cumberland arrow darter, as well as the federally endangered Indiana and Grey bats, both highly imperiled species protected under the US Endangered Species Act. Protecting these species is integral to protecting the region’s rich natural heritage for future generations.

We can stop this prison plan, protect Appalachian biodiversity, promote a just transition for the people of Appalachia who are reeling from coal company exploitation, and turn the tide on mass incarceration. But it will take your help.

Three ways you can take action: