Major Disease Outbreaks are Inevitable in Our Increasingly Connected World

In Review: Spillover: Animal Infections and the Next Human Pandemic
Mark J. Palmer

The next big human epidemic may not come from your neighbor’s sniffles – it may come from a cave, a tree in a tropical forest, or a duck pond. Spillover poses this unique quandary: Diseases in wildlife are now able to spread across the whole human race, and if you catch one of these bugs, you are likely to die from it. 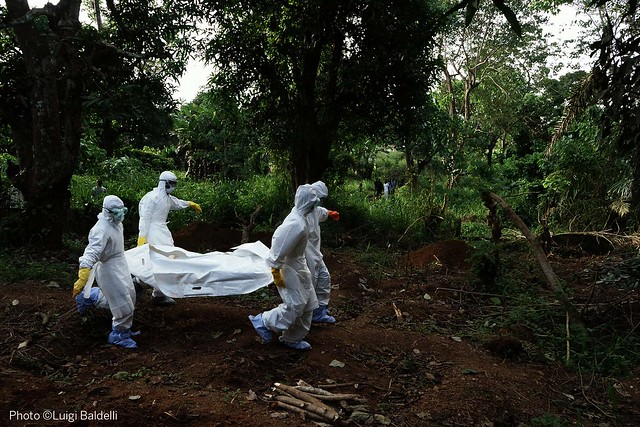 photo by Luigi Baldelli by Medici con lAfrica Cuamm, on FlickrAs we have seen with the recent Ebola outbreak in Africa, our modern transportation systems are excellent ways for virus or bacteria to roam throughout the world, invading new hosts and wreaking havoc.

Science writer David Quammen introduces us to the complicated origin and spread of “zoonosis” – diseases which originate in animals but can be passed along to humans. Some are well known, like AIDS and Ebola. Others are more rare and perhaps not as dangerous.

And of course, as with all good ghost stories, Quammen notes that there may be more contagions out there, incubating in animal populations, that can jump the human/animal barrier and cause frightening symptoms, suffering, and death. Especially since the human population is increasing and many people are moving into previously untouched habitats, such as tropical forests, which can be rich breeding grounds for germs and viruses.

And as we have seen with the recent Ebola outbreak in Africa, our modern transportation systems are excellent ways for virus or bacteria to roam throughout the world, invading new hosts and wreaking havoc. 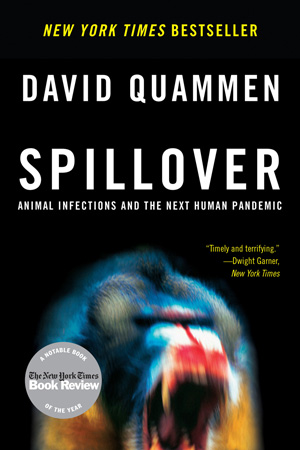 In Spillover, David Quammen follows researchers on the trail of
different zoonosis back to the origin of the outbreaks in remote places.

Quammen describes a number of zoonosis, including SARS, bird flu, and Lyme disease, which he has been tracking for years as a journalist for the National Geographic and other publications.

In Spillover, he follows researchers on the trail of different zoonosis back to the origin of the outbreaks in remote places – from the Ganges Delta in Bangladesh in search of the Nipah virus, to deep into the forests of Gabon to look at the impact of the Ebola virus on gorillas, to local markets in Congo and Cameroon in search of bush meat that could have helped transfer the AIDS virus to humans. His narrative on every disease includes an account of the outbreak and follows through with the history of the disease and its likely origins, the race by medical professionals to pinpoint the outbreak epicenter and develop cures. (If a disease does originate in an animal population, there is the possibility that the host population of animals have developed immunities that can help doctors find a cure.)

Spillover shows just how difficult it can be to find the locus of zoonosis, and speculates on what might be the next big unknown outbreak to hit us.

Quammen also explains how zoonotic diseases are exceptionally hard to eradicate. Medical researchers are at a disadvantage, because by the time they hear of an unusual disease outbreak, the damage may already have been done and the disease may be very difficult to contain. In many areas of the world, a person dying of disease is not likely to raise much interest even if some of the symptoms are peculiar. Local doctors are overworked and underequipped to deal with outbreaks. Simply identifying the disease agent can take weeks or months. AIDS is the classic example of such a disease, contracted first in Africa and eventually spreading into Europe and the United States with devastating effect.

Some of the most unexpected animals may be harboring disease vectors – chimpanzees (often killed for food in Africa), bats, and many species of birds that migrate through human habitats, coming into contact with domestic animals.

While very thorough and detailed, Quammen’s writing is also intensely gripping.. In Spillover, he makes the argument that our ability to survive such outbreaks – which are often the unintended consequence of our much-connected world and of our continuing disruption of the environment – is only as strong as our medical infrastructure and political will to provide information, relief, and impose travel restrictions – all controversial and expensive measures.