The Maasai, Wildebeest, and a Warming Serengeti

Walking across the plain in the 95 degree Farenheit heat, I marvel that the man beside me, Lekoko Torongei, seems perfectly comfortable in his bright red, woolen robes. Torongei, a 23-year-old Maasai warrior, is giving me and my group of 35 American tourists a tour of his village in northern Tanzania. The sizzling air blurs the huts in the distance, and as we approach, Torongei explains that the Maasai people were originally pastoralists, or nomadic cattle herders who moved throughout the savanna landscape. But now that their rangelands have been dramatically reduced through wildlife preservation efforts and development, his community also has to farm (which is challenging given the overused soils and dry climate of the region), and relies increasingly on revenue from tourists. “The Serengeti is a world famous safari destination, but to the Maasai, this land is home,” Torongei says.

One of the most famous attractions in the Serengeti is the annual wildebeest migration. Serengeti National Park, which attracts over 90,000 tourists annually, experiences its peak visitor season during the migration. “It is a truly spectacular event … Wildebeest move through the ecosystem in search of green pasture, in a regular pattern,” Torongei says. “This is surely one of the greatest wonders of the natural world.” 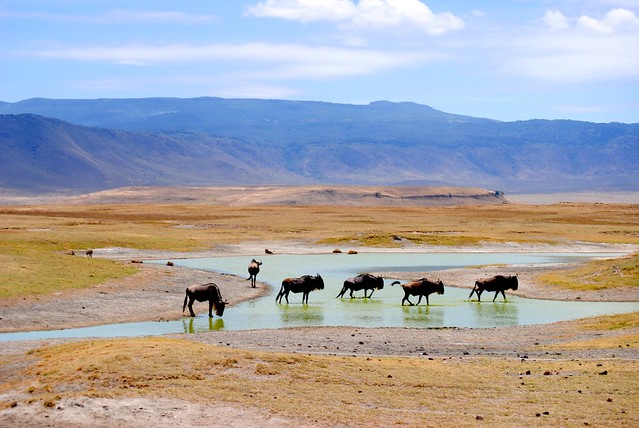 Photo by Emma HutchinsonWildebeest drink from a watering hole in the Ngorongoro Crater in northern Tanzania.

The stories of the Maasai and the wildebeest are intricately woven together in this complex and gorgeous ecosystem. Now, climate change is threatening to alter the fundamental nature of the entire Serengeti.

For more than 300 years after they first settled in East Africa in the 15th century, the Maasai roamed the plains freely, and their lives revolved around their cattle and the changing seasons. The geological nooks and crannies of the Serengeti provided a crucial diversity of resources that fueled their large cattle herds. The Maasai set landscapes ablaze, replenishing the soil of the savanna. The hooves of their cattle mixed the soils, regenerating new grassland that helped the droves of native wildebeest thrive. Young Maasai boys, as part of the process of becoming Maasai warriors, were taught how to care for the cattle and how to protect them from predators.

But in the late 1800s, all of that changed. The Germans arrived, then the British, and they began setting aside land for sport hunting and wildlife preservation. In the name of conservation, the British colonists forcibly removed the Maasai from the lands that had served as their open range for generations. These same lands then became Tanzania’s national parks.

The national parks house an incredible diversity of wildlife, including the great wildebeest migration of the Serengeti and Maasai Mara region. Wildebeest, also known as gnus, are quite ugly creatures, with each of their gangly body parts seemingly derived from a different animal and thrown together as if ‘designed by committee’. But together, they move in dynamic patterns, sometimes as a massive herd that blankets the entire landscape, and sometimes in a small single-file line of about 100 wildebeest. In the spring, when they’ve exhausted the season’s harvest in the southern Serengeti, the wildebeest move further north, settling at the Kenya-Tanzania border in the fall before migrating south again to begin the next year’s cycle.

The wildebeest migration, covering 10,000 square miles, has defined this region for over 1.5 million years, shaping the ecosystem and keeping it healthy for the benefit of other wildlife. As a keystone species, wildebeest have an inordinately large influence on the health of their ecosystem as compared to what their relatively small population of 1.2 million might suggest. They keep the grass young, healthy, and easy to digest. Areas impacted by the wildebeest migration have increased nutrients in the soil and boosted productivity. Even birds like cattle egrets follow wildebeest, gratefully snapping up the insects that are often kicked up from the grass in the herd’s wake.

Since the wildebeest travel in such enormous herds, they also provide protection for other migrating species, including some 200,000 zebra and 500,000 Thomson’s gazelle annually, making the migration a conglomeration of over 2 million animals. All three species have learned to survive by sharing resources — zebra eat the tips of the grass, wildebeest eat the meaty leaves, and gazelles pick at the leftovers.

Every year like clockwork, the migration begins. Except it’s not clockwork anymore. Climate change is starting to impact the ability of the wildebeest to migrate efficiently, manage resources, and ultimately survive. Africa is expected to endure up to 50 percent more warming than the rest of the planet. This will increase the incidence of extreme weather events in Tanzania, with long, extreme droughts punctuated by intense floods.

Weather changes are likely to have a serious impact on the great migration. “Heavy rains in the south have allowed the wildebeest to linger before beginning their trek, shortening their stay in the Maasai Mara plain or eliminating it altogether,” says Hashim Nkya, a veteran safari guide. As their migratory pathway shifts to accommodate changing resource distributions, the wildebeest will venture out of protected areas and become exposed to human development and poaching for bush meat.

“Some people are expecting that the animals will start seeking higher ground as conditions dry out; they’ll start moving to higher elevations,” Bill Durham, a Stanford anthropology professor who led my trip to Tanzania, says. “Well then they’re going to run into fences, they’re going to run into private property issues … It’s very scary, the idea that a mass migration will suddenly be fenced out. That would be a disaster for all aspects of East African ecology.”

Changing precipitation patterns have unique implications for the Serengeti ecosystem. Severe drought, for example, might cause the Mara River — the only river in the Serengeti ecosystem during the dry season — to dry up completely. A study by ecologist Emmanuel Gereta predicts that 30 percent of migrating wildebeest would perish within two weeks if this were to happen. Extreme drought in Tanzania would also stunt the growth of the grasslands, which attract certain grazers. The resource sharing between the wildebeest, zebra, and gazelle would be torn apart, increasing the risk of predation for all of them.

Climate change is also predicted to increase the frequency of intense rainfall, which poses a threat to the wildebeest through flooding rivers. The wildebeest cross the Mara River every year to get from Kenya’s Maasai Mara Reserve to the Serengeti in September. This is by far the most dangerous moment of the entire migration. The first skiddish wildebeest appears on the banks, and the crocodiles lie greedily in wait as the herds plunge in, calling out to each other in alarm as the strong currents pull them to and fro. The crossing is difficult enough as it is, but increased rainfall intensity will cause the Mara River to run much higher than normal at certain points in the year, making it even more dangerous for wildebeest to complete the journey. 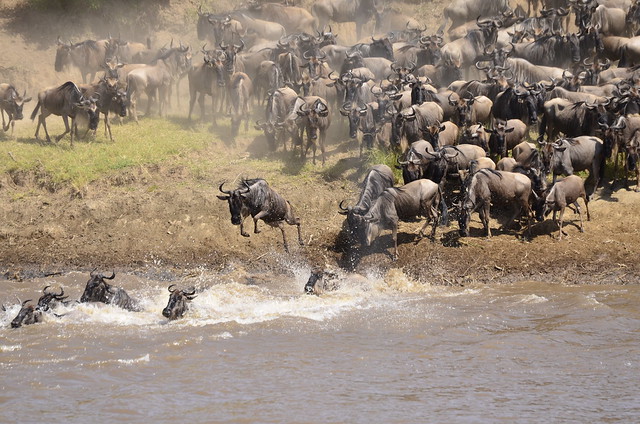 Photo by Thomson Safaris Tanzania Safaris and Kili Treks Wildebeest cross the Mara River during their annual migration. Increased rainfall could cause the river to run much higher at times, making the crossing more treacherous.

In a normal year, only a few thousand wildebeest drown or are eaten by crocodiles, but recently, numbers have been reaching 10,000 or more. Carcasses pile up on the banks of the river, looking more like a massive poaching slaughter than a routine swim in an ancient migration. Increased deforestation upriver has led to the flooding of the Mara River for the past few decades, and climate change has the potential to make the flooding even worse. This would turn the Mara River, which has been the wildebeest’s only lifeline in a parched landscape, into an unforgiving obstacle.

Today, most Maasai communities have ceased to be nomadic. More than 800,000 Maasai people are among the poorest in the nation, relegated to ramshackle villages on the edges of national parks. (Thirty-eight percent of Tanzania’s land is dedicated to wildlife preservation.) This trend is predicted to continue; human populations in the region are skyrocketing, putting pressure on the environment, increasing demand for agriculture, and shrinking the rangelands that the Maasai and the wildebeest depend on. According to Jenny Olson, a Michigan State researcher, Maasailand will be fenced in by farms by 2040. Not only will agriculture remove native vegetation and reduce the productivity of savanna soils, the hard boundaries created by farms and development will squeeze the Maasai and the wildebeest into impossibly tiny pockets of the landscape. And with climate change warming the Earth at an unprecedented rate, all of these existing issues will be exacerbated.

Before the Europeans arrived, there’s no doubt that the Maasai faced enormous challenges — the Serengeti has always been a harsh and dynamic environment. But they survived because of their mobility; if an area became too tough to handle, they could move and settle in a new location with better resources. The Maasai can’t do that anymore — they’re limited by property rights, exiled from the national parks, and forced into a very sedentary lifestyle that is increasingly dependent on a commercialized culture. If climate change makes Torongei’s land dry and infertile, and if the wildebeest migration no longer provides a steady stream of tourists, how will he support himself? Where will he go?

The future of the Maasai, the wildebeest, and tourism in the Serengeti depends on innovative solutions. Durham suggested that the first logical step is expanding protected areas for wildlife, while including Maasai communities as key stakeholders and managers. This would not only accommodate for changing ecosystems and shifting resources as the planet warms, but also keep wildebeest safe as they continue their annual migration. But this is easier said than done — the Serengeti ecosystem crosses a lot of jurisdictional boundaries that are controlled by many different groups of people. And the Maasai, as a crucial stakeholder in this issue, deserve a say as well. “People have seen this as one equation with several unknowns, but the equation is focused on the wildlife,” Durham said. “What people haven’t appreciated is that the Maasai are affected by the very same conditions that affect the wildlife, and that a joint solution might be better for everyone.”

Durham knows that the stakes are high for both the wildebeest and the Maasai. “A splendidly adapted lifestyle for that environment could be ending. And if you team that up with the fences on the wildlife, it could be that the whole ecosystem will be changing,” Durham nearly whispers. “Wouldn’t it be a tragedy if this whole grassland ecosystem was basically ending as we watch?”