The poems in Dear Specimen, by W. J. Herbert, look closely at remnants of the given world and the animals, large and small, extant or extinct, that have passed through it: the trilobites and ammonites, crickets and cardinals, millipedes and mammoths. These poems examine the beauty and cruelty that abound in nature, and they scintillate with the spark of life while acknowledging its inevitable extinction. 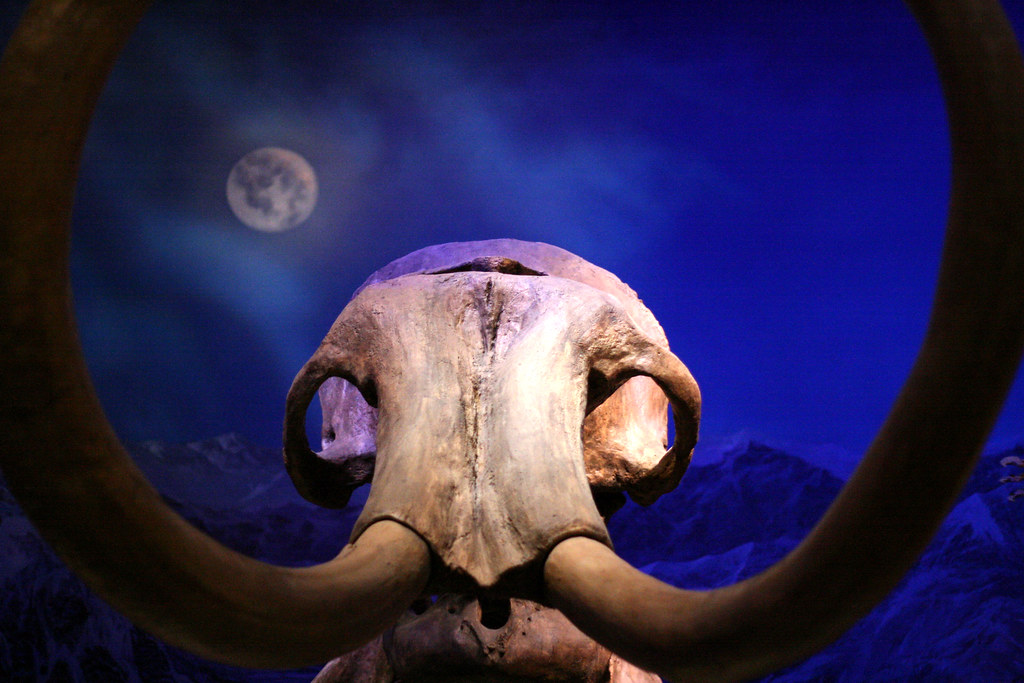 A mammoth skeleton at the Royal Tyrell Museum in Drumheller Alberta. One driving force of the poems is the speaker’s own impending mortality. Photo by mynameisgeebs. 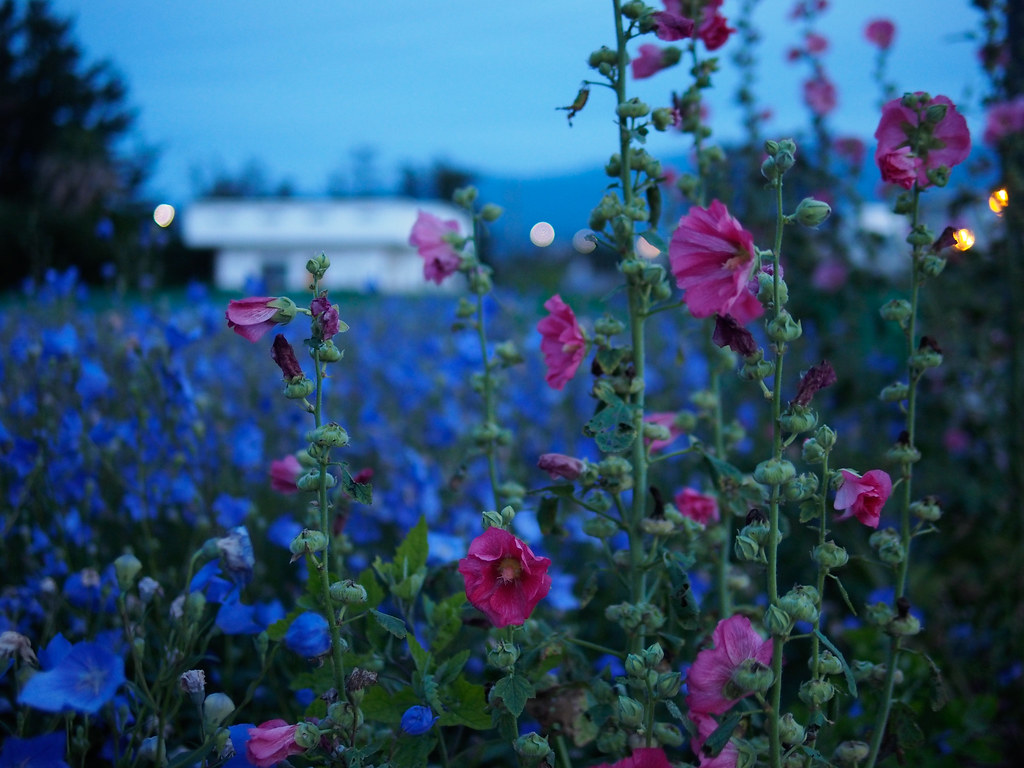 There are plants, too, such as hollyhock (pictured), mesquite, creosote, hyacinth, and yarrow. Photo by Kim MyoungSung.

WJ Herbert scrutinizes the creatures of the world with both the objectivity of a scientist and the emotional engagement of a poet. She speaks to biological specimens, asking the big questions that concern all of us: Why didn’t you survive? Why are we here? Why do we have so little time? Some of the specimens are of long extinct species such as T. rex or Mosasaurus. Others are familiar contemporary animals, including white-tailed deer, salamanders, and sparrows. Literally dozens of animal specimens — some living, others long or recently dead — appear in the poems. There are plants, too, such as mesquite, creosote, hyacinth, hollyhock, and yarrow.

One driving force of the poems is the speaker’s own impending mortality. Each of the five sections of the book contains a poem in which a daughter, Sarah, is the one asking questions. In “After My Diagnosis, Sarah Asks,” Sarah’s question is, They’ll cure you, right? Although Herbert does not have an answer to this specific question, a major project of the book is to provide Sarah with whatever answers about the meaning of life and death can be found. Herbert turns to specimens in search of these answers, and sometimes the questions themselves are gorgeous. Here, in “Speak to Me,” she is addressing a millipede:

How does the luminescent

blue of your body

expand then close up again.

fluent as a geisha’s tasseled fan?

“At the Museum of Permian Extinctions” is a one-line poem: “When will we be what you are? Dissolved by the ocean’s unraveling.” Here, Herbert is speaking to fossil ammonites, marine mollusks whose last species disappeared from Earth about 66 million years ago. Her question can be interpreted as follows: “When will contemporary humans become fossils?” Her added clarification, “Dissolved by the ocean’s unraveling,” is deeply poignant given the population decline of so many sea creatures — whales, otters, fish, and corals to name a few — and the emergence of swirling patches of plastic in the world’s oceans, the largest of which, the Great Pacific Garbage Patch, is twice the size of Texas.

Although Herbert’s questions are unanswerable, meaning arises in the looking and asking. The implied answer seems to be that close observation and acceptance of the world makes life worth living despite the reality of death and extinction. Herbert studies death unflinchingly, and her descriptions of it are often beautiful. In “Dusky and Zigzag Salamanders,” this is how she describes a dead salamander squeezed into a jar:

each leg, a dwarf tree

sprouting from your underbelly. Seed eyes,

She connects animal deaths to human ones not only by alluding to her own death, but also but also by including poems about her father’s death from cancer. One of these is a sonnet called “Mounting the Dove Box.” It begins:

I ordered it online for him and then

nailed it under the eaves where he could see

a pair fly in and out with twigs, and when

but no doves seemed to nest, though one flew in

and we both held our breath. Then heavy rain.

The poem goes on to relate that the nest was never completed and there were never any chicks, but the nest fragment hangs onto the eaves, disintegrating, like the father who is barely hanging onto life.

Another sonnet, “Fledglings,” laments the death of migrating arctic terns who starve because warming seas do not produce enough krill to sustain them. The poem attests that warming seas also disrupt the food chain for other species, including auklets, puffins, murres, and blue whales. This brings us to another great project of Dear Specimen: bearing witness to the interconnectedness of life and the fragility not only of individuals and species but also of whole ecosystems and, indeed, the Earth itself.

“Tipping Point” begins with an epigraph from Swedish teenage activist Greta Thunberg: “If you choose to fail us, I say we will never forgive you.” This epigraph drives home the point that global warming and habitat destruction are not inevitable: we have a choice, and the future of the planet is in our hands. All will not be lost if we can reduce our dependence on fossil fuels. There is no time to waste; we must do this now. The alternative that “Tipping Point” offers is frightening and heartbreaking:

an algae-coated sloth whose canopy’s

on fire though she just gave birth last night. Her nook

inside a lush Brazilian tree

which once sequestered carbon, helped us breathe.

Notice the rich and delicious use of assonance, alliteration, and rhyme in this excerpt from “Tipping Point.” Whether free verse or formal, Herbert’s poems are exquisitely crafted, and her use of language is gorgeous throughout. The poems are also memorable, telling us again and again, “Look at this!” And whether what she shows us is sad or lovely or both, our role is to pay attention, to know that everything is temporary, that death and extinction are common, but we have an essential task before us: to protect Earth’s animals and plants, which cannot protect themselves, and thereby protect each other and ensure that human extinction and the end of the Age of Mammals will not come anytime soon.

Lucille Lang Day is an Oakland, California-based writer and poet. Her memoir, Married at Fourteen: A True Story, received a PEN Oakland/Josephine Miles Literary Award and was a finalist for the Northern California Book Award in Creative Nonfiction. Her new anthology, Poetry and Science: Writing Our Way to Discovery, was published by Scarlet Tanager Books in November 2021. Follow her @LucilleLDay.