Boats from Maui arrived offshore at dawn, when winds, swell, and currents were expected to be at their calmest. On board were Indigenous sacred site guardians from around the world, seeing their first glimpse of uninhabited Kaho‘olawe: a rough and revered island, recovering from military target use, alive once again as the spiritual and ecological heart of the Hawaiian renaissance. 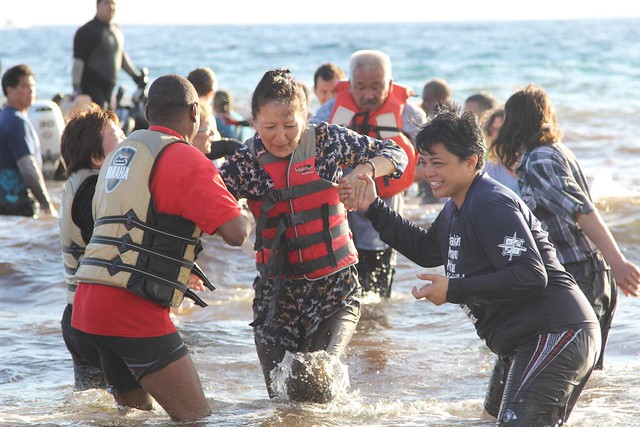 Photo by Toby McLeodAltantsetseg Tsedendamba of Mongolia, one of the brand-new swimmers, being helped by her companions. A group of Indigenous leaders from across the world and their allies met on Kaho‘olawe island in Hawaii ahead of the IUCN conference.

For some of the Indigenous guardians and interpreters — non-swimmers from an African desert, or land-locked Central Asia — the trip marked the first time they’d seen an ocean. After a permission chant, answered by voices chanting on shore, Native Hawaiians from the Protect Kaho‘olawe ‘Ohana (PKO) confidently and tenderly helped the newcomers swim through the surf and find their footing among the rocks, then join the brigade passing bags hand-to-hand from boat to shore. The joy and exhilaration of all present needed no translation.

The island journey was a pre-ramble, before 10 days in Honolulu among thousands of participants at the International Union for Conservation of Nature’s (IUCN) World Conservation Congress that took place earlier this month. Days of ceremony and a night of shooting stars on the remote island energized the emissaries from Mongolia, Kenya, California, Kyrgyzstan, Borneo, the Russian republics of Altai and Buryatia, and Papua New Guinea.

The Indigenous peoples’ group, an informal delegation to the IUCN put together by their allies, followed Dr. Noa Emmett Aluli, whose occupation of Kaho‘olawe 40 years ago helped turn the public against the Navy’s bombardment of Kaho‘olawe. Prof. Davianna McGregor pointed out rock shrines that wondrously survived the military era. The chanting of PKO members gave full voice to the story of the island’s birth, a sacred red child of earth mother Papahanaumoku and sky father Wākea.

“Sacred sites are the oldest form of protected area on the planet,” said Christopher “Toby” McLeod, project director of Earth Island Institute’s Sacred Land Film Project, who led the effort to bring sacred site guardians together on the island. “Forty years ago, Indigenous people were in a very different place. It has been a huge struggle.”

Aloha Āina, love the land: that has been the guiding principle of the Protect Kaho‘olawe ‘Ohana. PKO member Craig Neff guided the delegation to a hale, and described the meaning and construction of the thatched-roofed ceremonial structure.

On April 2, 2015, Neff was the first of many people arrested for standing in the way of construction vehicles on the road to the Thirty Meter Telescope site atop Mauna Kea, on the island of Hawaii. The TMT, the world’s largest telescope, would be the fourteenth to be installed on the peak, although construction has been temporarily halted by the Hawaiian State Supreme Court. In January, a judge — noting Neff’s Native Hawaiian lineage, his three decades of training in traditional cultural knowledge, and the connection to a sacred mountain that fueled his quiet protest — found him not guilty of obstructing the road. 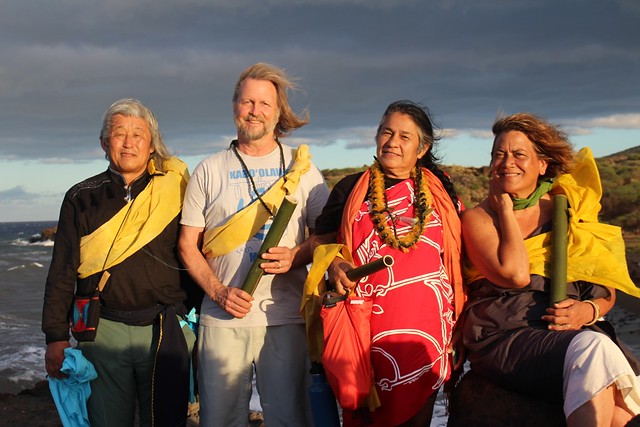 Cultural practitioner Luana Busby-Neff, Neff’s wife and business partner, explained: “Craig told the judge, ‘You desecrate land, and you desecrate me,’ and the judge agreed with his argument.”

The delegates shared inspiring victories. The actions of Peter Kallang and Yahuda Tungang from Sarawak, a Malaysian state on the island of Borneo, led to the cancellation of a dam — meant to generate hydroelectric power in a region that already has a large surplus — that would have flooded their communities and destroyed some of the world’s oldest rainforests. Kallang described how such projects only benefit the construction industry.

The Sarawak story was of interest to Winnemem Wintu Chief Caleen Sisk of northern California, currently battling US government plans to raise the height of Shasta Dam for the benefit of southern California farmers, which would flood traditional Winnemem territory for a second time. Chief Sisk also confronts hordes of spiritual tourists at a spring sacred to her tribe, high on Mt. Shasta. 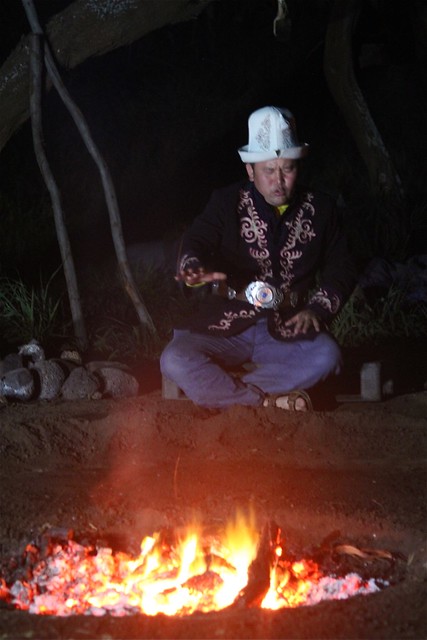 Photo by Toby McLeodKamil Mamdaliev of Kyrgyzstan singing verses from the Manas epic, a centuries-old
story of a warrior in Central Asia.

“Seeing the different people’s struggles, I think of hikers, climbers, people seeking our spring,” Sisk said. “They only know it’s sacred because we said it is. In the US, all of these areas have already been set aside for public use—ignoring our need to be there to take care of things.”

Molu Kulu Galgallo, a nomadic camel herdsman and spiritual elder of the Gabbra people of northern Kenya, described how his sacred mountaintop was saved from a hotel development, with the help of international funders. He addressed the group: “What do we ask of the world? To respect us and our culture.” His interpreter Ali Gufu Ibrae, speaking for himself, added, “If one of our friends tries to destroy it, we should humbly tell them, ‘These are our roots.’”

Through simple rituals of eating together, and through ceremony that constituted a pledge to one another and to the island itself, the guardians of sacred natural sites quickly and easily developed deep bonds of respect.

After dark, the windswept quiet of Kaho‘olawe was enlivened by the full-throated singing of Kamil Mamdaliev of Kyrgyzstan who sat by the fireside and sang verses from the Manas epic, a centuries-old story of a warrior in Central Asia, half a world away.

Danil Mamyev, who works for the revival of nature and traditional culture in Russia’s Altai Republic, said simply, “It is time to turn to Indigenous people. Our time, our world, is here, now.”

IUCN has convened the World Conservation Congress every few years since 1948, but never before in the United States. IUCN’s Red List tracks threatened species and lets the world know when they become extinct. The World Conservation Congress is an influential forum where scientists, governments, NGOs, academics, and experts from across the world figure out ways to tackle threats to the global environment and promote the establishment and sustainable management of protected areas. For decades, the Congress did not openly welcome Indigenous peoples defending rights to lands and waters they consider sacred and inviolate.

In the past, the powers at work on urgent conservation issues have perpetuated historic wrongs by relegating Indigenous stewards of protected lands and waters to an inferior status. For at least a dozen years, Indigenous peoples and their allies have been sounding the alarm at IUCN — not just against governments and companies, but against scientists and environmental organizations whose attempts to protect land have sometimes prompted the removal of Indigenous peoples, turning them into conservation refugees and causing the loss of precious traditional knowledge and sustainable land management practices. 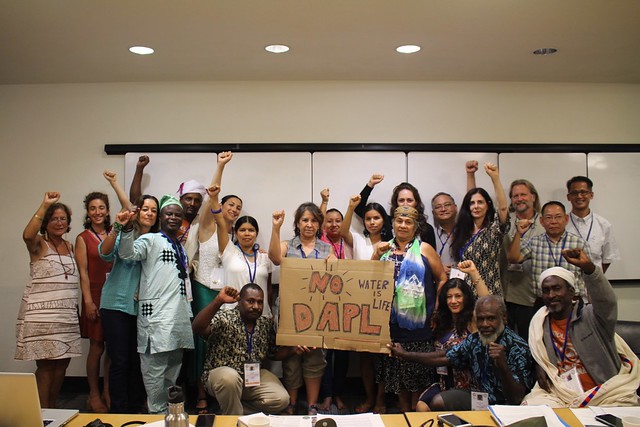 The atmosphere of the 2016 Congress marked a significant change from the past.

Victoria Tauli-Corpus, the UN Special Rapporteur on Indigenous Rights, argued forcefully for conservation organizations to recognize that Indigenous peoples are often the reason why intact forests still stand. “The ideology of conservation has not been too mindful or sensitive to Indigenous people, the travails they have been going through. There have been a lot of declarations with no teeth,” she said. US Secretary of the Interior Sally Jewell too, weighed in on the issue, saying: “I would encourage all the people from all the countries all over the world to tap into this indigenous knowledge to build respect for those cultures.”

By the end of the Congress, the IUCN Members’ Assembly, for the first time, voted to create a category of membership for Indigenous peoples’ organizations. In the future, that will represent a membership that comes with a vote — something unavailable to the sacred site guardians who had gathered earlier on Kaho‘olawe. The Members’ Assembly also passed a resolution, Motion 26, declaring that all protected areas and the sacred lands of Indigenous peoples should be ‘No-Go Areas’ for destructive industrial activities like mining, dam-building and logging. (Motions adopted by the World Conservation Congress set the agenda for years of efforts to come, and can bolster the passage of effective legislation in member countries.)

The No Go motion asks governments to “respect all categories of IUCN protected areas as No-Go Areas for environmentally damaging industrial-scale activities and infrastructure development,” and urges businesses to “withdraw from [ongoing] exploration or activities in these areas, and not to conduct future activities in protected areas.” 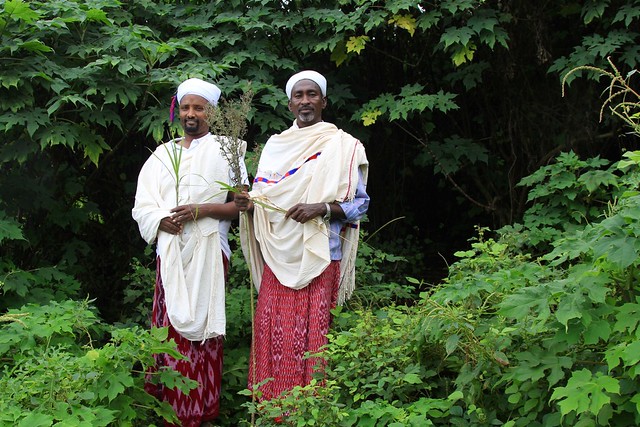 Photo by Toby McLeodGabbra elder Molu Kulu Galgallo (right) and his interpreter Ali Gufu Ibrai. “There are still people with the heart of humans,” Gufu Ibral said when he heard about the IUCN motions.

Initially, there was some fear that the motion would be defeated if the US, Canada, Australia and some other member nations opposed it. Indigenous delegates got organized — speaking up for the motion on panels, in a press conference, and in the convention’s busy social media sphere, and eventually the Members’ Assembly overwhelmingly adopted Motion 26. The US and Canada abstained. There were only 12 votes against Motion 26, including by Australia and South Africa, and a member organization of hunters, the Dallas Safari Club.

“If we do not recognize the life force of the living forest, no form of conservation is going to work,” said Sarayaku leader Patricia Gualinga of Ecuador. “We cannot continue to allow conservation that allows industrialization.”

On Kaho‘olawe, the sacred site guardians had begun to write a mutual declaration to be delivered to IUCN. An expanded Indigenous delegation continued their work in private meetings in Honolulu. At a celebration of 40 years of restoring the cultural and natural resources of the sacred island of Kaho‘olawe, delegates stood to read their declaration, a three-page document that says in part:

We, the indigenous peoples of nations around the world, have a responsibility to maintain our ancestral ways of protecting our sacred sites, landscapes, seascapes and their interconnectedness and linkages and to protect them from all forms of extractive industries, major infrastructure developments and destruction…

We ask all gathered at the 2016 IUCN World Conservation Congress to recognize the need to protect indigenous peoples, sacred sites and ancestral territories in your homelands and support their obligation and responsibility in safeguarding these lands from damage and desecration for generations to come.

Gabbra elder Molu Kulu Galgallo and his companion Ali Gufu Ibrae were already on their long journey home from Honolulu when Motion 26 was passed. They received Toby McLeod’s jubilant message as they boarded a bus for a daylong ride back to northern Kenya. Later, Ibrae wrote to McLeod, “I had thought nobody cares, but out there, there are still people with the heart of humans.”