Alison Fure became drawn to bats while gardening in her southwest London home. Noticing bats flying around during the day as she worked outside. It’s unusual, but bats do come out on warm days during winter months, so she had to ask herself: “Did I really just see a bat in the daytime?” This led to a master’s degree in ecological management and monitoring, followed by four years of training to obtain a bat license. 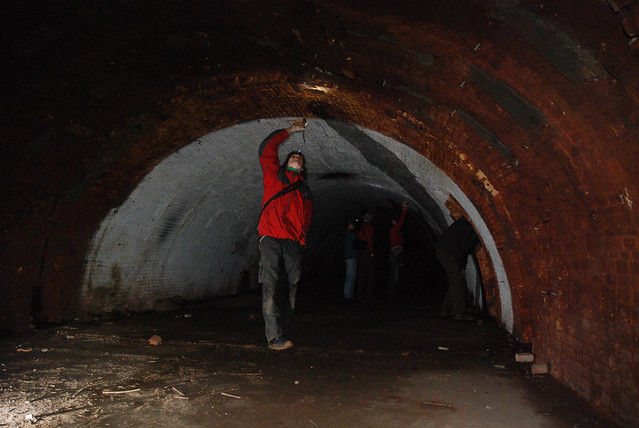 This license, which she obtained in 2005, qualifies Fure to survey old homes and proposed developments for roosting bats and to suggest measures to protect them. (Incidentally, it’s the search for food in the lean winter months that sometimes drives bats out during the day.)

Cities present bats with a number of challenges. Among other things, reductions of green space and shifts to modern building materials limit the areas where these furry, winged mammals can forage and roost. Light pollution is also a major concern, as it disrupts bats’ nocturnal rhythms and thus behaviors such as feeding and commuting.

Effects of urbanization vary by species. Overall, however, the impact of urban development on bats has been harmful — and dramatic. According to Jo Ferguson, built environment officer for the Bat Conservation Trust, some of the United Kingdom’s bat populations declined by more than 90 percent over the twentieth century. This was largely due to such factors as the loss of natural roosting, commuting, and foraging habitat. (Climate change and weather variability also played a part.)

Given the many benefits cities bring to humans, it’s counterproductive to propose a return to a romanticized rural past where humans and wildlife lived in close, if uneasy, coexistence. What we can do, however, is shape the urban fabric in ways that benefit humans as well as other species. Bats are a good case in point.

Across Europe, targeted conservation measures and widespread awareness‑raising, particularly under the 1994 EUROBATS agreement that aims to protect all 53 European bat species, have been helping bat populations rebound. In countries studied by the European Environment Agency, the bat population increased by 43 percent between 1993 and 2011.

In the UK, legal efforts to save bats began even earlier. Back in the 1980s and 1990s, the country introduced a package of laws to protect them from building-related harm, among other things. Under the regulations, it is illegal to deliberately harm a bat or destroy a bat’s roost. After the regulations were passed, inquiries about bat conservation shot up, as did the numbers of local bat groups and licensed “bat workers” like Fure.

Fure’s job involves scanning construction work sites — both new developments or old homes and offices under renovation — for bats, and ensuring no harm comes to any of these critters that might be living at these sites.

The work of a bat ecologist has several stages. Prior to demolition, construction, or alterations of existing buildings and structures, Fure is contacted by anyone with an interest or legal requirement in protecting bats. This could be a homeowner, developer, or local official. The client is responsible for covering the cost of ecological experts, as part of complying with the EU law.

In an ecological appraisal of a site for bats, the first step is to establish what information already exists about bat species and their habitats in a particular district. London-based ecologists like Fure can call upon (and often form part of) dedicated organizations that compile exactly this kind of information. A useful first port of call could be the London Bat Group records officer, the London Bat Atlas, the National Bat Monitoring Programme, or Greenspace Information for Greater London (which bears the delightful acronym GiGL). 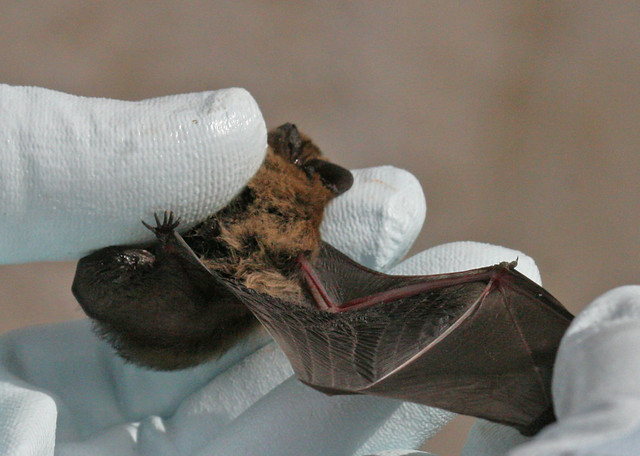 Once that’s done, Fure undertakes three evening site surveys with at least one other consultant. Ideally these surveys take place in June, July, and August, to coincide with bats’ maternity period, although time pressures don’t always allow for this. Fure examines the building for areas that are likely to house bats, such as eaves and lofts. Around these areas she looks for physical evidence that a bat has made its home there; telltale signs include bat droppings, which are full of insect material when crumbled.

As bats can squeeze into the smallest of spaces, bat workers can’t rely solely on physical evidence. Fure uses bat detectors to pick up echolocation signals. The technology has come a long way in the two or so decades she’s been doing this work. When she started out, a bat detector “looked like Lego, and was rubbish,” she says.

If these tests determine that bats are indeed present, Fure makes recommendations to the client. These might be for a particular lighting option (e.g. warm-colored lights that are less damaging to bat retinas), the installation of bat bricks or bat boxes to replace roosting spots that will be disturbed, or the completion of building works in a season when the bats have migrated away.

Fure may monitor these work sites for up to three years – including, if necessary, temporarily moving the bats to a safe spot while the construction is taking place. The rule of thumb is for the new environment to be as good as or better for bats than the old one.

Eighty percent of the time, this is sufficient to ensure that bats won’t be affected. But occasionally – and this isn’t the ideal situation – disruption to bat roosts can’t be avoided. In such cases, the client needs to get a mitigation license. Fure sets out the requirements that need to be met to limit the impact of the construction on bats and once those conditions are met, she signs off on the license. With careful planning, neither the bats nor the owners of the structures should be too inconvenienced in the long term.

In cases where bat protection laws are breached, those responsible are subject to fines if caught. In the United Kingdom, these fines are generally in the thousands of pounds, and the consequences of legal violations are increasing. In March this year, a property developer who destroyed a bat roost was fined nearly £ 11,000.

However, the fines may not be a sufficient deterrent, given the potential financial gains from property development. Fure believes in attitudinal change as well as strong enforcement. “It’s a last resort to prosecute wildlife crime,” she says. “It doesn’t help bat conservation. It turns people against bats, and we want to turn them on to bats.”

Fure is constantly scanning the cityscape for features that would be beneficial to bats. Historic and community buildings such as old pubs and schools are often good spaces for bats, she notes. Natural building material tends to be more malleable and to have tiny spaces where bats can find shelter. Tall trees could be useful for creating a corridor around buildings for bats to get around, she says. And some social housing complexes have unintentionally bat-friendly features, such as communal gardens and hanging tiles.

It’s not all serious work all time for London’s bat professionals. Fure and some of her colleagues are also busily involved in citizen science projects and public education. You may see her sporting a bat costume for some of their bat walks and talks with the public. As Ferguson, whose work with the Bat Conservation Trust extends to public awareness and engagement, notes: “Working with even really young kids on bat awareness can actually be quite easy and fun, because often they’re already mad about Batman!” There’s a sweet spot for children where fascination with the superhero translates into an interest in bat protection. 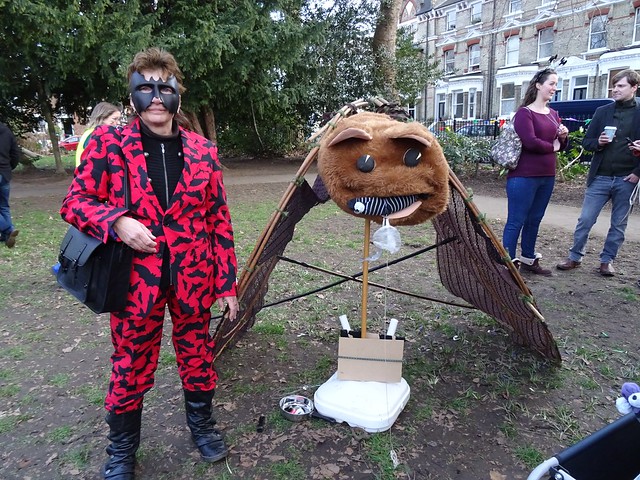 Photo courtesy of London Bat Group Library Fure, with Biggles the bat puppet, dons a bat costume for bat walks and talks with the public.

Most of the time, Londoners are surprised to find that their houses, workplaces, and public buildings house bats, Ferguson says. And there are plenty of misconceptions about these often inconspicuous, unassuming, and delicate creatures that are one of our key pollinators. For one, bats aren’t the large and intimidating creatures of popular imagination. The common or soprano pipistrelle bat, the species most commonly found in London, for instance, is matchbox-sized. Nor are bats messy pests. They don’t make nests, and their droppings are dry and relatively localized, with no known risks to public health.

While the UK and several other European nations have a relatively well-developed culture of bat protection, that’s not the case in many countries across the world. But, as Fure notes, there are practical steps urbanites and suburbanites all over the world can take to encourage bats.

The main focus, she says, should be on maintaining green cities. “It’s important to think before you take away that front space in your garden,” she says. “We’ve got to hang onto as many green features as we possibly can.” These could include green roofs and connecting natural (and dark) corridors.

Ferguson, meanwhile, notes that there are certain plants people can cultivate that are beneficial to bats; avoiding pesticides is also recommended since pesticide contamination of their diet can harm their health. Providing bats somewhere to live in urban areas is key, she says. Bat boxes should be placed near dark wildlife corridors that allow bats to move safely through the landscape to feed. And just as ecological diversity provides bats with more foraging opportunities, diversity of urban spaces benefits them – and humans – as well.

And both Ferguson and Fure suggest retaining a sense of wonder about the built environment, in which buildings are more than just domiciles for humans. As Ferguson says: “We want to create a world rich in wildlife where bats and people thrive together.”