The conflict is one of several in western Spain, as companies eye the region amid a green energy boom.
Jose A Cano Stefano Nicoli

The Valdeflores Valley is a stunning natural area in western Spain teeming with local tree species and migratory bird and adjoining the urban area of ​​Cáceres, a small UNESCO World Heritage city of just 95,000 inhabitants. Here, local residents are battling to defeat a proposed lithium mine, and in the process, drawing attention to contradictions in the European Union’s climate policies, in which climate action is sometimes at odds with conservation. 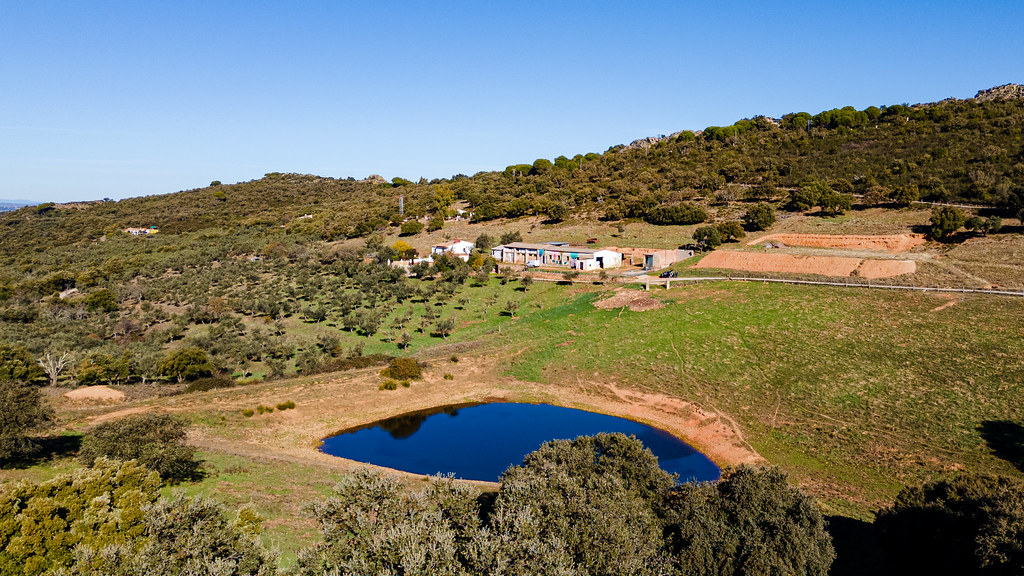 Aerial view of the Cooperativa Activa area in the Valdeflores Valley in Spain. The cooperative manages 50 hectares of land in the heart of Valdeflores that is dedicated to the regeneration of the dehesa, a traditional livestock management technique in central Spain that involves rotating the grazing areas for livestock. All photos by Stefano Nicoli.

Gonzalo Palomo has found himself at the center of this controversy. A doctor in veterinary medicine with the University of Extremadura, Palomo is also a member of the Cooperativa Activa, which manages 50 hectares in the heart of Valdeflores dedicated to the regeneration of the dehesa, a traditional livestock management technique in central Spain that involves rotating the grazing areas for livestock. Giving us a tour of the cooperative’s land, he guides us through bushes removed by wild boars the night before — noting “that’s a good sign” indicating the presence of wildlife on the land — and points to the rows of trees: “This is what you have to see in the dehesa for it to have a future: trees of different ages. The oldest ones already carry acorns, [there are] bushes that are going to be trees soon, and future bushes.”

Since 2013, the cooperative has rented a farm in partnership with the local university to implement a vision of sustainable agriculture. The cooperative employs a holistic land-management model developed by the Savory Institute, a US-based organization with a network of agricultural learning centers around the globe and the ambitious goal “not just to stop climate change, but to bring the concentration of carbon in the atmosphere back to levels before the industrial revolution,” as Palomo puts it. The Valdeflores farm is one of the three that serve as a control experiment for the Institute’s research in the Iberian Peninsula.

But the Valdeflores farm, its work to address the climate crisis, and the valley that it sits in — an officially protected natural area and special protection zone for birds — are all at risk. Infinity Lithium Spain, a local subsidiary of the Australian multinational Infinity Lithium, aims to exploit the Valdeflores lithium deposit, which is considered to be the largest in Europe. As the demand for lithium has grown in recent years — the metal is used in lithium-ion batteries, a cornerstone of the growing green energy economy due to their use in electric vehicles and for green energy storage. Infinity Lithium is one of several companies vying for a piece of the global market. The regional government of Extremadura granted the company research rights to a site in Valdeflores Valley in 2015. These permits allowed the area to be investigated but not exploited.

The company has since submitted two different proposals for the site, both of which tout job creation associated with the project. The first proposal, submitted in 2018, involved a large open pit mine. The second, offered in response to community concerns in October 2021, involves an underground mine, with hydrogen-powered vehicles as sustainable option. According to Infinity, the mine would generate 710 direct jobs and 1,660 indirect ones, an enticing projection in a region with an overall unemployment rate of 18 percent, and of 40 percent in those under 25 years of age. 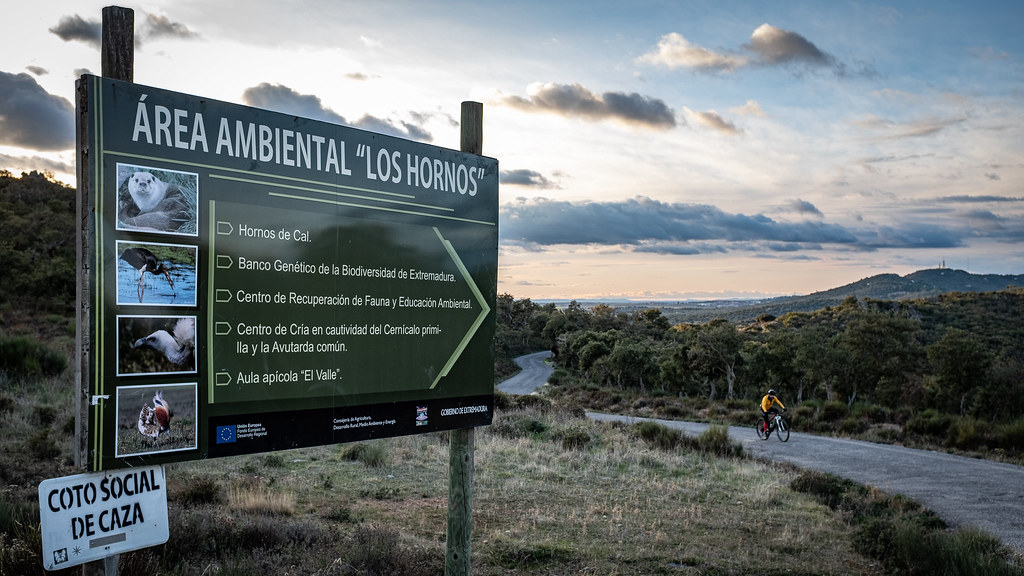 The natural area of Los Hornos threatened by Infinity Lithium Spain’s plans to mine in the region. The Valdeflores lithium deposit is considered to be the largest in Europe. 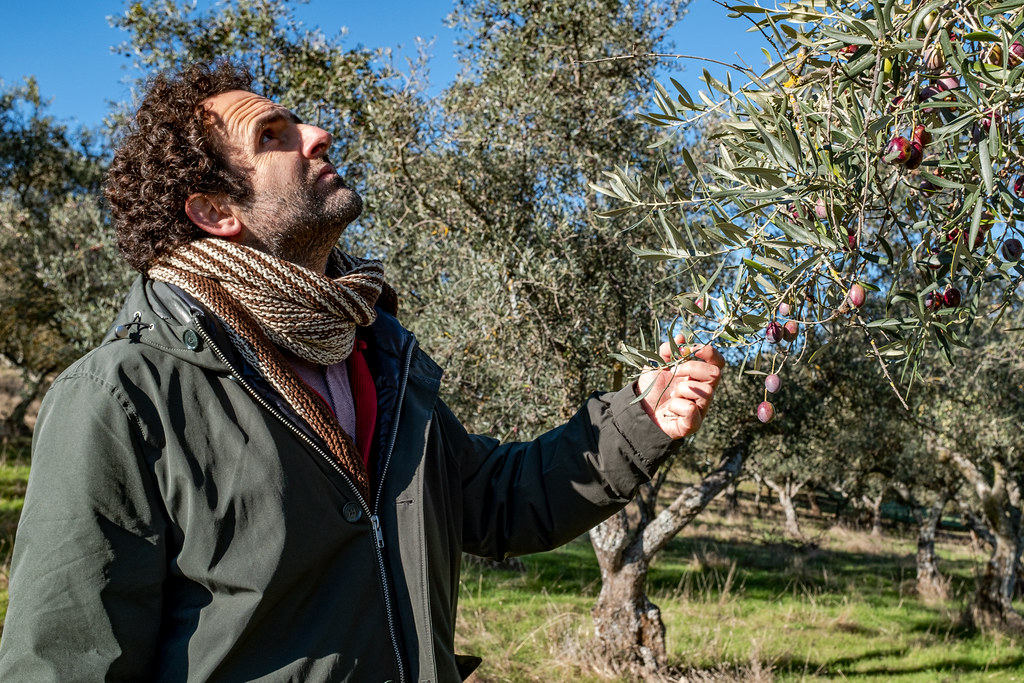 Gonzalo Palomo, who teaches veterinary medicine at the University of Extremadura, and member of Cooperativa Activa says the cooperative’s goal is “not just to stop climate change, but to bring the concentration of carbon in the atmosphere back to levels before the industrial revolution.” 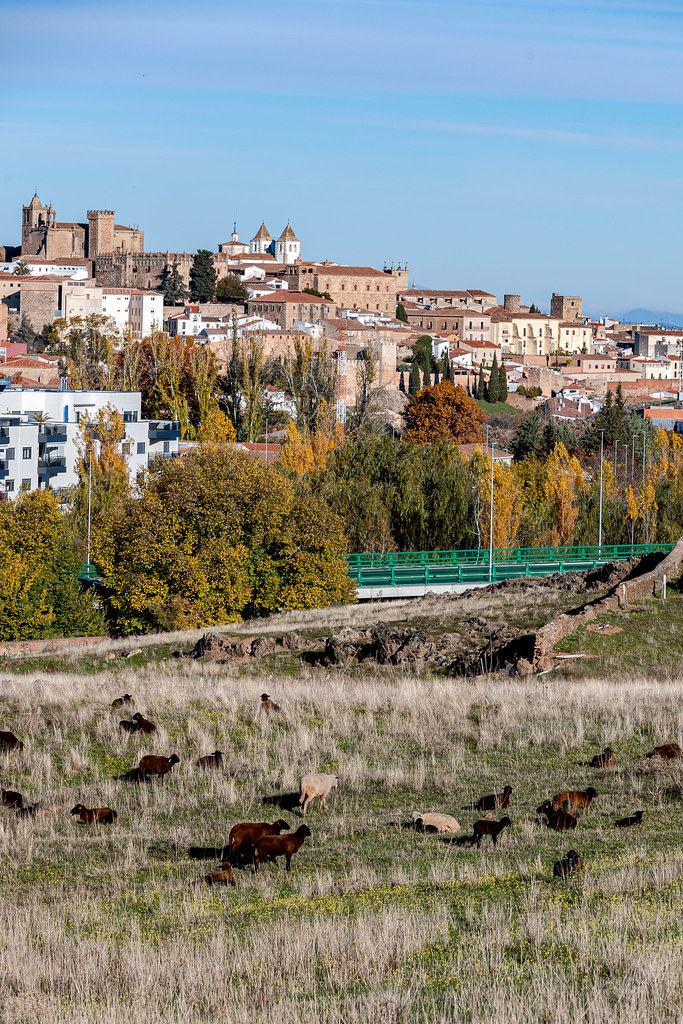 Sheep grazing outside the old city of Caceres. The Valdeflores farm is one of the three that serve as a control experiment for the US-based Savory Institute’s research in the Iberian Peninsula. Caceres, city of just 95,000 inhabitants, is a UNESCO World Heritage Site.

So far, locals have stalled the mine, forming a citizen group, Salvemos la Montaña (Save the Mountain), which has taken Infinity to court. This group, organized in 2019, says that the open-pit mine project announced in 2018 would destroy the protected area of Valdeflores and that the resulting emissions of the mining process and equipment would pollute the city, affecting air quality. Furthermore, members are skeptical about the numbers the company has presented regarding new jobs.

The Cáceres City Council is backing the citizen’s association and has fined the company 26,500 euros for exploration works without permission. The city council is also involved in two lawsuits against the project, both challenging Infinity’s exploration permits. As long as these lawsuits are pending, the project will remain paralyzed.

For its part, Infinity Lithium Spain has downplayed the environmental impacts of the mine. David Valls, who was general manager of the company at the time of reporting but has since stepped down from his position, has been involved in the lithium mine project from the beginning. Walking us through the area of the proposed project, he points out the stones of slate from which Infinity intends to extract lithium. He’s proud of having adapted the project to try to meet the demands of the residents of Cáceres: “Making an underground mine is technically arduous and complicated, but a project like the one in Valdeflores allows it. It will be a brand new industry that does not exist in Europe,” he explains. 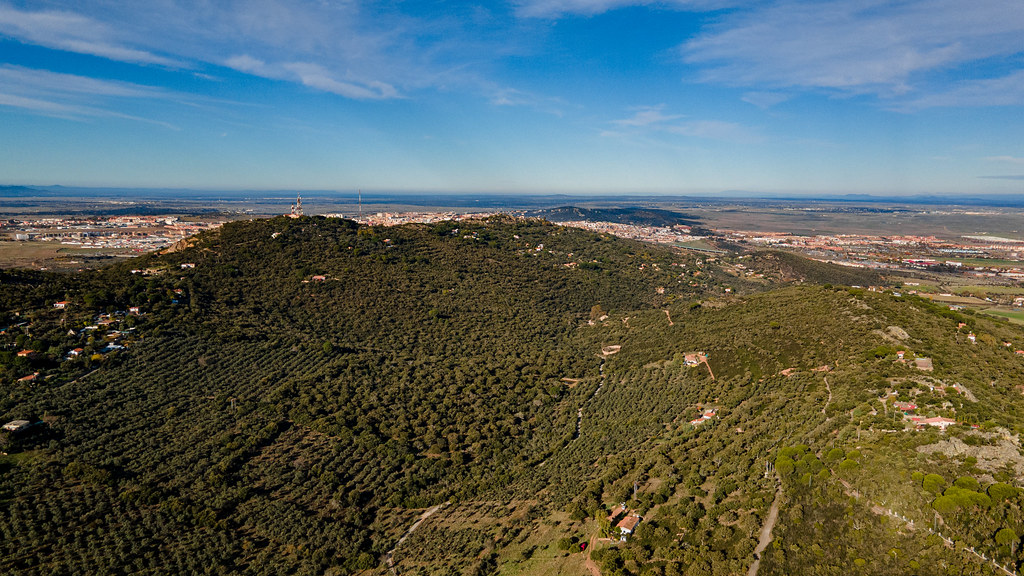 Aerial view of the Valdeflores Valley with the city of Caceres in the background. 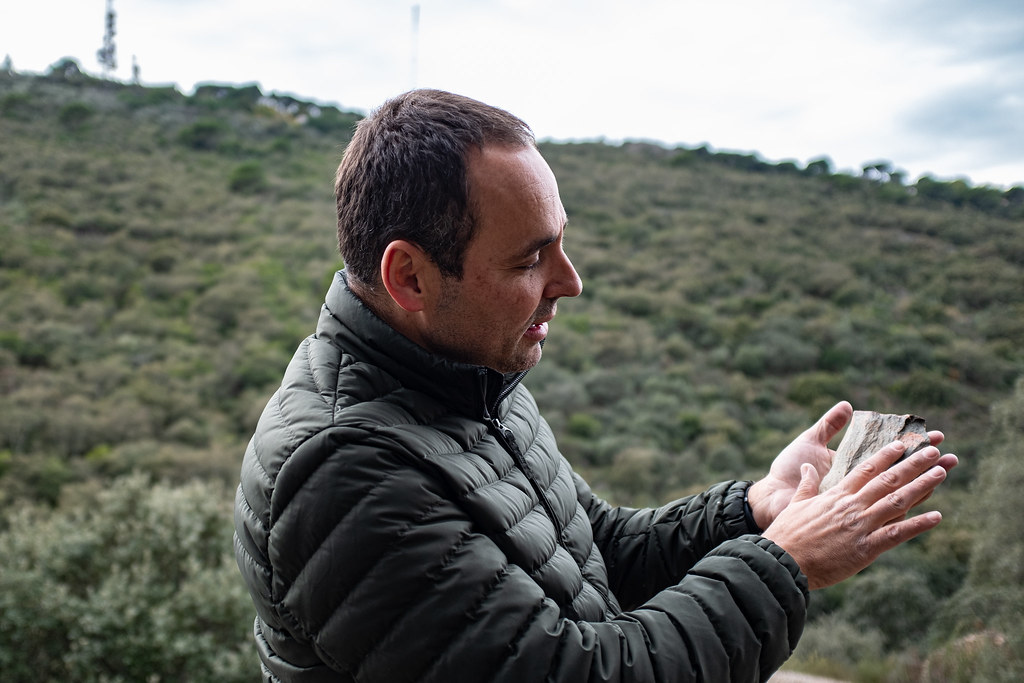 David Valls, former general manager of the company, shows off a piece of slate from which Infinity intends to extract lithium. “Making an underground mine is technically arduous and complicated, but a project like the one in Valdeflores allows it,” he says. 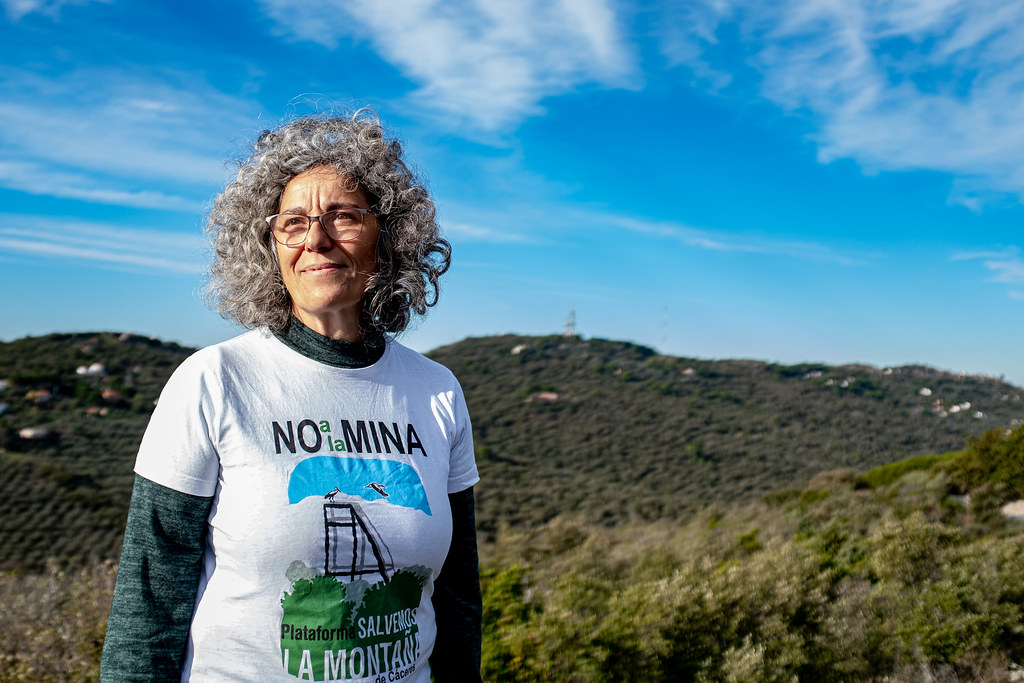 Beatriz Martin, spokesperson for Salvemos la Motana de Caceres (Save the Mountain of Cáceres) that has challenged Infinity’s exploration in court, is skeptical about the number of new jobs the company says the mining project will provide.

Valls says that, as an underground mine, the project will respect the landscape, that there is no risk of air pollution, and that the sewage ponds have been moved to safer locations compared to the original plans. “To those who are opposing us I say: This is our project. Let the regional administration evaluate its environmental impact,” he says, adding that once it’s been evaluated, the company will undertake an environmental impact assessment as required under EU law before any mining begins.

Beatriz Martín, spokesperson for the platform Save the Mountain of Cáceres believes that “the only project that can be discussed is the one that was presented in the first place and that does not announce more than 400 jobs.” The second proposal it’s not officially being regarded by the regional government until courts decide about the city council lawsuits.

Valdeflores project isn’t the only of its type proposed in the region. Lithium Iberia has proposed another large lithium mine, known as Las Navas, just 30 kilometers north of Cáceres. The mine would be just outside of Cañaveral, a small municipality of just 1,047 inhabitants. Lithium Iberia has said the mine — which will also be underground — will provide 400 direct jobs for the region and that it will be up and running in 2023.

Las Navas, too, has faced steep opposition from locals. It is located in the “dehesa boyal” of Cañaveral, an area traditionally dedicated to common pastures for ranchers and cork harvesting. It is also adjacent to an ancient oak forest. Locals have formed the No A La Mina (No to the Mine) platform in opposition, noting that even with an underground mine it is impossible to ensure the protection of the site, which is also located in the middle of the migratory route of protected birds. Elvira Díaz, spokesperson for No A La Mina, says she doubts “that the 400 jobs are real and that the traditional oaks will survive,” as the company has claimed.

For his part, the mayor of Cañaveral, Jacinto Sánchez, says he is “neither for nor against” the mine, noting that the regional government of Extremadura is ultimately responsible for evaluating the sustainability of the plan.

The conflict over the lithium mines in Cáceres and Cañaveral illustrates perfectly the political, technical, and social puzzles of the “green” energy transition, which involve tradeoffs between local impacts and global objectives, between sustainability and economic recovery. These puzzles are likely to continue arising in the region in the years to come, given that the Spanish government is eyeing Extremadura as a potential green energy hub of sorts. In addition to its involvement in the Las Navas mine, the national government would like to construct a giga-factory for electric batteries in the region. The factory would utilize lithium from Las Navas mines and, potentially, also from Valdeflores. Spain submitted the project to the European Union in June 2022. The country hopes to obtain funds for the factory from Next Generation European, a program aimed at facilitating a green recovery from the Covid-19 pandemic. The EU considers lithium a “strategic mineral,” an essential asset with multiple uses as Europe works to transition away from fossil fuels

Several green technology companies would like to exploit the region as well. Phi4Tech has designed a factory for battery cells in the province of Badajoz and another for cathodes in two different locations in the province of Cáceres. Both projects aim to tap into the quickly developing green energy industry. Volkswagen has also identified Extremadura as one potential location for a mega-factory that it wants to build in Spain to produce lithium batteries. A mine for nickel — a material that is also necessary for batteries — is also planned in the region, about 200 kilometers south in the Monesterio municipality.

Jose A Cano is a journalist who has worked for several Spanish media from Andalusia and Madrid in his country, and has reported from the Czech Republic, Hungary, Argentina, and Morocco.

Stefano Nicoli is a photojournalist who has worked with national and international photo agencies covering major news and sport events. As a freelancer he has worked on reportages related to environmental and socio economic issues.