Restrictions require residents to rip up vegetables or face fines, jail time
An excerpt from Biting the Hands that Feed Us: How Fewer, Smarter Laws Would Make Our Food System More Sustainable.
Baylen Linnekin

If sustainability starts at home, then so too do rules that determine just how sustainable you can be in your home life. Farmers can rely on their own crops and livestock for food, compost, clothing, and a host of other solutions. Gardens can be a great place for homeowners to help feed a family and use composted waste. Even other less obvious homebased pursuits can feed into sustainability efforts. 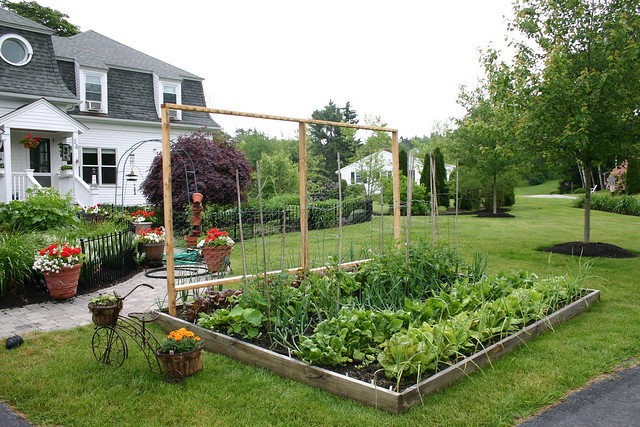 photo by Carol NorquistGrowing food in home gardens has exploded in popularity in recent years, but gardeners around the US face a dizzying number of bewildering restrictions.

For example, brewing beer — whether from ingredients grown at home or obtained at a farm or store — can help reduce packaging and transport costs, help out local farmers keen to receive spent grains, and give homebrewers the ultimate control over what they’re drinking. The explosion of homebrewing in America in recent decades is a great example of how federal rules can affect your home. Before 1978, it was illegal for Americans to brew beer at home. That year, President Jimmy Carter signed into law a bill that allowed Americans to make beer (and wine) at home, so long as they didn’t sell it. In addition to letting Americans brew beer at home for the first time since Prohibition, the law is credited with helping to set in motion the explosion of craft brewing in this country, as many of yesterday’s homebrewers went on to become today’s commercial craft brewers. Although the ban on homebrewing is one of the best known examples of a prohibition on producing one’s own food at home, many arguably more sustainable food practices — ones far more mundane than brewing beer — are banned at home by a tangled web of local rules.

Growing food in home gardens is among the easiest, most popular, and most personal ways to promote and consume sustainable food. It’s also a practice that’s exploded in popularity in recent years. A 2009 report by the National Gardening Association found that nearly one third of American households raises some combination of fruits and vegetables at home. A 2014 report by the same group found that the number of edible gardens had grown since the earlier report by 17 percent. A 2012 report by the New York Times noted that home food gardens are a byproduct of the “growing interest in sustainability.”

Despite the mushrooming popularity of raising food at home, gardeners around the country have faced a dizzying number of bewildering restrictions in recent years. “Jason Helvenston was at work on his second crop, spreading compost to fertilize the carrots, bok choy, kale and dozens of other vegetables he grows organically on his property in Orlando, Fla., when the trouble began,” reads the lede of that same New York Times article, which focuses on municipal battles over home gardens. A neighbor’s landlord had complained that Helvenston’s neat little garden made his house look “like a farm.” Helvenston, a sustainability consultant, squared off against city officials intent on forcing him to rip up the garden in his front yard. The city backed down in 2013, and Helvenston was able to keep his garden. But others haven’t been so lucky.

In some cases, local governments have gone so far as to rip food bearing plants from the yards of residents. Denise Morrison of Tulsa, Oklahoma is one such victim. In 2012, Tulsa code enforcement officers walked into Morrison’s front yard without her permission and uprooted her edible garden. Morrison, who was unemployed at the time, was using the foods she grew to sustain herself during a difficult period. Code officers, on the other hand, were enforcing a city ordinance that said plants cannot be higher than twelve inches “unless they’re used for human consumption.” Morrison’s garden contained “lemon, stevia, garlic chives, grapes, strawberries, apple mint, spearmint, peppermint,” fruit trees, and other foods that would have been used for her consumption had the code enforcers not cut some down and ripped others right out of the ground. The city claimed Morrison’s “yard did not contain any organic garden, but had large amounts of untended, dead and decaying vegetation; unhealthy trees; dead tree limbs; and rotting tires.” Morrison — who had taken photos of her edible garden and shared them with the city — fought back, filing a civil rights lawsuit against the city. Amazingly, two successive federal courts dismissed her lawsuit. They determined Tulsa officials had provided Morrison with adequate notice before taking action.

Although Morrison’s case may seem extreme, others have even faced jail time for nothing more than growing food in their own yard. In 2011, an Oak Park, Michigan, woman was threatened with more than three months in jail for keeping a beautiful, well-manicured, edible garden in her front yard. City officials charged Julie Bass with a misdemeanor, arguing that Bass’s basil, cabbage, carrots, cucumbers, tomatoes, and other edible produce were not “suitable live plant material.” The city has its own definition of what “suitable” means. “If you look at the dictionary, suitable means common,” city planner Kevin Rulkowski told local station WXYZ. Rulkowski is wrong not just about Bass’s garden but about the meaning of the word “suitable.” It means — among other terms that do not include the word “common” — “similar,” “matching,” “adapted to a use or purpose,” or “proper,” according to Webster’s Dictionary. In fact, “common” isn’t even a synonym for “suitable.” For these reasons, perhaps, the city eventually dropped the charges against Bass.

Other examples of cities and towns cracking down on residents’ vegetable gardens are less extreme, if no less ridiculous and maddening in nature. In 2012, for example, Newton, Massachusetts officials ordered a town resident to remove his hanging tomato garden from his front yard. Officials said the hanging garden violated a city ordinance prohibiting the construction of “swing sets, swimming pools, or sheds” in a front yard. Newton resident Eli Katzoff was forced to move his plants to the grounds of Andover Newton Theological School, a nearby seminary. The seminary was happy to take in the tomatoes, but its leader was perplexed by the town’s behavior. “Who can be against tomatoes?” wondered then-seminary president Nick Carter.

Tomatoes — a fruit — are probably fine in Miami Shores, Florida. But vegetables are not. The city code was amended to prohibit growing vegetables in a front yard in 2013. Hermine Ricketts and her husband Tom Carroll had been raising vegetables in their front yard in the city for more than fifteen years. The couple had a host of vegetables growing there — including arugula, cabbage, kale, and onions — when the city changed the code. Days later, a city code enforcement officer showed up at their home and ordered them to rip up their garden or face fines of $50 per day. “I politely asked the Village to leave me in peace and let me do my gardening,” Rickets told her local CBS affiliate, “but they refused to do that.” The couple, devastated, was forced to uproot the garden. “When our garden was in full production, we had no need to shop for produce,” Rickets told the station. “At least 80 percent of our meals were harvested fresh from our garden. This law crushes our freedom to grow our own healthy food. No one should have to expend time and energy dealing with such nonsense.” The couple fought back, suing the city in 2013.

Prohibitions on gardens such as those in Orlando, Tulsa, Newton, Miami Shores, and elsewhere arise largely out of zoning regulations. Zoning, supporters contend, is intended to prevent conflicts and nuisances from arising. There’s probably some truth to that argument. But sometimes, as in the case of the prohibitions on edible gardens detailed in this chapter, zoning itself becomes the nuisance and the source of conflict. In Orlando, for example, where Jason Helvenston raised his garden, the city admitted its zoning rules were too vague to charge Helvenston with violating the city code. But the specifics the city proposed as a fix to that code — including a rule that would confine annual crops to no more than 25 percent of a front yard — simply replaced untenable vagueness with indefensible arbitrariness. “We think 25 percent is more than sufficient to provide for kitchen gardening in the front-yard area,” chief city planner Jason Burton said at a contentious hearing attended by what the Orlando Sentinel characterized as “dozens of garden lovers.”

In the end, the real purpose of zoning is to protect property values. Because many owners and buyers prefer the look of a manicured lawn to that of an edible garden — just like USDA rules prefer the look of a perfectly symmetrical tomato to that of an “ugly” one — zoning rules tend to reflect those wishes. As the examples in this chapter suggest, change to those rules has been slow to come. But change is coming. In 2007, Sacramento, California, revised its zoning code to eliminate a ban on front-yard gardens. In nearby Berkeley, the Ecology Center reported in 2010, city government laid plans to encourage residents to raise edible gardens. That same year, Seattle lawmakers eased restrictions on a host of home-based agricultural practices. But in cities such as Miami Shores, where Hermine Ricketts and her husband Tom Carroll have to deal with the “nonsense” underlying the city’s ban, a court will decide the matter.

The alternative typically proffered by opponents of front-yard edible gardens — limiting your garden to your backyard only — ignores two very real issues. First, backyards can be imperfect — or even nonexistent. Those that do exist may be tiny, rocky, wooded, or otherwise unsuitable for gardening. Some people don’t get enough sun in their backyards to grow fruits and vegetables, which require ample light to flourish. That was the problem faced by Helvenston and by Ricketts and Carroll. Second, lawns — the conventional choice for yard vegetation — typically use more water than do edible gardens. Estimates of water savings vary, but most sources agree that fruit and vegetable gardens use less water than would a lawn in a comparable space. Those who want to live more sustainably often choose to grow some of their own food and find ways both to reduce their reliance on commercially bought food and lower their water use. Swapping out a lawn for an edible garden can help achieve both goals.