LNG Terminals and the Environmental Unlearning of Philadelphia

One definition of insanity is doing the same thing over and over and expecting a different result. It’s hard not to think of that definition when considering current plans to build Philadelphia’s economic future on making it a major fossil fuel-based energy hub. 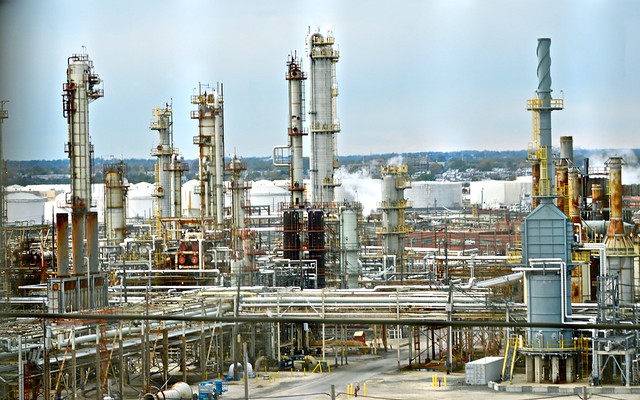 Photo by Laura Pontiggia Philadelphia has a long history as a fossil fuel based energy hub, and business and political leaders are now hoping to revive that history with a new LNG export terminal.

The insanity factor here is that Philadelphia has a very long history as a fossil fuel-based energy hub — with very painful consequences. The United State’s first oil wells were drilled in Pennsylvania in the 1850s. It was natural that much of the output from these wells would be processed in the state’s largest city. Over the years, even into the 1970s, refineries (there were seven then, five today), petrochemical manufacturers of plastics and other fossil fuel dependent products, along with related infrastructure, proliferated in around Philadelphia.

The cumulative result of all this economic activity was a massive build up of pollution residues. Which was why Forbes magazine in 2011 ranked Philadelphia the country’s most polluted large American city, the “capital of toxicity,” in the magazine’s own trenchant phrase.

Given that history, what could now lead Philadelphia’ business and political leaders to promote a major fossil fuel-based energy hub to reanimate the city’s future economy, a plan leading the press to dub Philadelphia, “the new Houston?” The answer to this question comes down to four words: Marcellus shale natural gas.

Most of the prolific production from Marcellus shale gas wells is now generated in Pennsylvania. The “new Houston” development plan envisions Philadelphia as the a major recipient of this gas, almost all of which now goes elsewhere by pipeline, primarily to processing facilities in the Gulf of Mexico. A proposed LNG (liquefied natural gas) exporting terminal in Philadelphia’s Port Richmond section has in recent months become the focus of much of the debate over this whole energy hub concept.

The environmental objections to this LNG terminal touch upon its possible (and indeed likely) negative effects on local air and water quality. They also include upstream environmental issues, notably the enhanced Marcellus shale fracking that would be necessary to meet the natural gas supply needs of a Philadelphia LNG producer/terminal and the resulting impact on climate change.

The risks to air quality were neatly laid out this March by Matt Walker, the community outreach director with the Clean Air Council, in testimony at a Philadelphia City Council hearing. “A fossil fuel energy hub as it’s currently being envisioned,” he said, will include “liquefied natural gas, oil trains, gas and gas liquids pipelines, and petrochemical manufacturing. Increasing the number of such facilities [including the proposed LNG terminal] would reverse the progress the city has made in cleaning up its air by re-invigorating and ramping up many of the same types of pollution sources as those largely responsible for Philadelphia’s history of poor air quality…. Such a build-up will substantially further degrade Philadelphia’s air quality and have a disproportionate impact on low-income neighborhoods being asked to host such facilities.”

“A fossil fuel energy hub,” he continued, “would also increase the potential risk to public safety should an accident occur.” This last comment has an almost prescient quality. Two months after Walker’s testimony, a horrific Amtrak accident on rails running through Port Richmond (where the LNG facility would be located) killed eight and injured scores.

Tracy Carluccio, deputy director of Delaware River Keepers, pointed out that the proposed LNG terminal would pose risks to shipping on the Delaware River from transport leaks, explosions, and fires. She added, “You also should be looking at the myriad upstream impact problems … [including] cumulative life cycle gas emissions. There are huge lifecycle risks to be considered … but no cradle to grave evaluations on the local and regional environment have been done,” she said.

One very troubling aspect about the LNG terminal debate in Philadelphia, and indeed the whole energy hub debate in the city, is the fact that officials who will ultimately be called upon to make key decisions in this realm don’t seem to be listening to environmentalist arguments very closely. “City Council seems more interested in special interests than taking the public’s interests seriously,” said Carluccio. “There hasn’t been a true opportunity for environmental and community groups to be heard … and when we are heard, we’re given short shift.”

Adding to this view, Walker noted: “Most energy hub hearings at City Council are industry dog and pony shows. Environmentalists routinely get pushed to the end of the hearing agendas…. [They] have only had token opportunities to speak to mostly empty rooms to present their case to City Council.”

Walker opined that much of this may be due to confusion among City Council members about the nature of frack-generated natural gas. “They don’t appreciate that this energy is not ‘green’ energy but fossil fuel-based energy,” he said. An important point, not only when it comes to the proposed LNG terminal in Philadelphia or to the city’s whole energy hub planning, but with respect to the broader future of natural gas as part of the world’s power generating and transportation mix.

Currently, the mid- and long-term future of the city’s LNG export terminal seems dim, not because of many well-founded environmental concerns, but due to economic and competitive factors.

Almost all of the 60-odd large-scale LNG export terminals already in operation or planned and under construction around the world, including 12 in the United States, will likely become operational before a Philadelphia one could do so, co-opting the world LNG market. The pipeline infrastructure to make a Philadelphia LNG export terminal operational does not yet exist, and money to bring it into being is not currently available. And most significant, a similar terminal in Cove Point, Maryland already has the necessary infrastructure in place and government export terminal construction approval.

The Philadelphia facility’s future aside, however, LNG terminals like it are a good focal point when it comes to considering the larger issue of the future of natural gas, like the huge quantities now coming from Pennsylvania’s fracking-dependent Marcellus shale deposits.

Is this fossil fuel destined to win grudging approval from environmentalists, its fracking genesis and methane emissions notwithstanding, because it might be better than coal for electricity generation and better than diesel as a transportation fuel? Or are renewables such as solar, wind and geothermal coming on so quickly for electricity generation and electric transportation models building enough momentum to dispense with natural gas as an intermediary between the fossil fuel energy past and the green energy future?

These are the big questions to ask. Once answered, questions about LNG export terminals like the one now being considered in Philadelphia will find their own answers naturally. And cities planning their economic growth with an emphasis on energy might start looking beyond the kind of futures long peddled by fossil fuel and petrochemical interests.