It’s an unseasonably warm December morning in Beijing, and the sky is dark and brown.

In this suburban neighborhood on the south side of the city, visibility isn’t more than a dozen meters or so. A thick grey haze has enveloped the streets, like a fog machine has been hard at work to recreate the set of a 1980s horror film.

Buses with high beams shining rumble slowly through intersections, and the air smells like dirt. 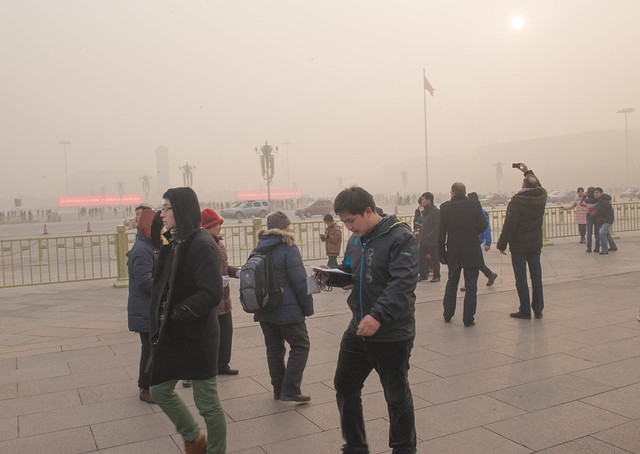 Photo by Michael davis-burchat No one is more susceptible to the harmful effects of air pollution than children.

A gaggle of children in blue uniforms walk with their parents to a local elementary school. Their chatter and giggles are muffled under white and pink masks. For these kids, it’s just another day in one of the most polluted cities on earth.

The shift in 1979 from socialism to the free-market rescued millions of Chinese people from grinding poverty. But liberalizing the economy came at a cost: the brutalization of China’s natural environment.

Millions of acres of the country’s farmland is so contaminated from industrial run-off that growing food crops on that land is now banned, and nearly two-thirds of China’s underground water is unfit for human contact, according to the Chinese ministry of environmental protection.

Soil and water contamination are, clearly, serious issues in China, but perhaps nothing symbolizes the country’s ecological degradation more dramatically than air pollution.

In cities like Beijing, smog has become a national embarrassment.

Air cleanliness is measured by the amount of microscopic pollution particles ­— called PM2.5 — present in the air. The World Health Organization states that exposure to a PM2.5-level greater than 25 over a 24-hour period can be potentially harmful.

During the wintertime in Beijing, the city’s PM2.5 level regularly hovers around the 300 or 400 mark, and it’s not uncommon for it to skyrocket above 600.

There are significant health problems linked to toxic air. A recent study by Berkeley Earth, a research organization based in California, concluded that air pollution contributes to the deaths of approximately 1.6 million people in China each year.

And no one is more susceptible to the harmful effects of air pollution than children.

“Children are impacted in many ways [by poor air quality], but particularly by asthma and respiratory illnesses and by developmental or neurocognitive delays linked to exposure to pollution. There is even new evidence that exposure to air pollution is a contributing factor to obesity,” according to Sarah Grineski, a Sociology Professor at the University of Texas at El Paso, who responded to questions via email.

Grineski recently co-authored a study showing that young children who are exposed to toxic air pollutants are more likely to have poorer academic results.

Childhood exposure can also have a lifelong impact on health. “Children are more vulnerable to the health impacts of air pollution because they consume more air and food per unit of body weight than do adults,” Grineski says. Because they are growing and developing rapidly, their systems are sensitive to the impact of toxins and these early insults can manifest in adult diseases.”

Many Chinese parents are deeply anxious about raising families in cities routinely blanketed in a thick layer of smog.

Natalia Ytsma is a Canadian naturopathic doctor in Beijing. She has spent much of the past several years in China, and has been living full-time in Beijing for the past six months.

She is pregnant with her first child.

“I’m concerned about the effects the air may have on the fetus,” she says. “I can’t help but think how much exposure [to pollutants] it’s getting through the placenta. I would hate to think my child developed asthma from the pollution around us.”

Ytsma is planning on moving back to Canada when her husband, a schoolteacher, completes a contract in the summer. The baby is due a month later.

She says there are many aspects to living in Beijing she enjoys, but the pollution is too severe to stay.

“I wouldn’t raise my children here,” she says. “It’s just too unhealthy.”

The myriad health effects linked to smog are distressing to many parents in China, but most, of course, don’t have the luxury of moving to a developed country.

“I’m very concerned about air pollution levels and the hazardous effects it has on children,” says Jenny Lu, a Beijing pathologist with a 4-year-old daughter. “It’s a very real problem.”

Lu says that she tries to protect her daughter from the deleterious effects of Beijing’s air by using purifiers in her apartment and taking holidays in parts of southern China where the air is cleaner, but she still worries that those measures aren’t enough.

“We do everything we can as a family but there is a limit. Government must solve the problem.”

Today, there are millions of Chinese children who have been breathing Beijing’s toxic air since they day they were born.

Sara (who asked that her full name not be published) is a 16-year-old high school student in Beijing. She walks the two kilometers between her home and her school everyday, regardless of the PM2.5 level. Like many Beijingers, she doesn’t wear an anti-pollution mask.

“In school we learn about pollution and the damage it can do to our bodies,” she says. “But I’m used to living in this condition, so I don’t wear a mask.”

One of the most effective ways to limit the impact of poor air quality is the use of indoor air purifiers. However Sara’s school, like the overwhelming majority of Chinese public schools, does not have air purifiers.

“The classroom windows are [often] open, too, so people can get fresh air,” explains Sara, who is very much aware of the absurdity of that attitude. “I think students believe [the air pollution issue] is important, but maybe some teachers don’t agree. Some of them think breathing the air makes you tougher.”

She says the government should do more to curb pollution, like move more factories away from the large cities.

“It’s such a big problem, only the government can do something about it.”

Chinese frustration with rising pollution levels is mounting; over the past year there have been hundreds of protests against low air quality, and contaminated water and soil.

The majority of demonstrations take place in rural and western China, away from the country’s largest metropoles, yet the Communist Party is acutely aware of the public anger toward toxic pollution.

The Chinese government has over the past several years tolerated greater public access to air quality readings, yet authorities still regularly scrub Chinese websites and social media of pollution-related content that might cause public unrest.

“Social media is full of chatter on days when levels of pollution soar — some of it directed against the government, blaming it for inaction or corruption,” says Dan Gardner, a history professor and China expert at Smith College in Massachusetts. “Does this make the government uneasy? Absolutely. Does the government view the environmental crisis as a threat to its legitimacy? Yes, I believe so.”

But Gardner says that there’s a catch: The major source of the Communist Party’s legitimacy since the establishment of the People’s Republic of China in 1949 has been the economic prosperity it has brought the country, so it must decrease pollution without stunting economic growth.

“It doesn’t simply want to trade one possible source of destabilization for another,” he says.

China has, in fact, made strides to limit pollution. In 2014, for example, it reduced its consumption of coal and overall emissions by 2 percent and 6 percent, respectively, according to the National Development and Reform Commission.

Policy watchers see this as a major step in the right direction, but it hardly resonates with average Chinese families.

More important to those in Beijing are the policy decisions that affect their daily lives, like the two separate air quality ‘red alerts’ recently issued by authorities, both in December 2015.

Beijing in 2013 created a four-tiered, color-coded alert system for air pollution. The system is designed to reduce spiking pollution levels and limit residents’ exposure to toxic air. A red alert, the highest pollution rating, is issued if PM2.5 levels of 200 or higher are predicted to last for three days or longer. During red alerts, the use of private cars is limited, building construction is temporarily restricted, and schools are closed.

The December red alerts were the first ever issued in Beijing, and responded to PM2.5 levels well above 200.

Government officials said that issuing the red alerts demonstrates that Beijing is serious about protecting the city from the worst air pollution, but critics wondered why a red alert had never been issued before, despite the fact that Beijing’s air pollution levels consistently exceeded the 200 PM2.5 threshold over the past two years. Some critics suggested the timing of the alert — during the Paris climate talks — was deeply suspicious, and claimed the alert’s primary aim was to mollify the international community.

Regardless of motivations, at the Paris talks the Chinese government did agree to peak its carbon emissions by 2030, increase its use of non-fossil fuels, and grow 4.5 billion cubic meters of new forest area.

But for some young people in Beijing, that might not be enough.

Sara, the high school student, says she plans on attending university in North America, and is looking forward to living in an environment where she doesn’t need to constantly fret over air quality.

Asked whether she wants to move back to Beijing once her university studies are completed, her answer is simple: “No, of course not.”