Light at the End of the Tunnel

Perhaps there will be a world like the one we already envisioned, one in which glaciers and kindness, wildness and refuge, pikas and civil liberties, can survive.
Michael Engelhard

I step from the truck among 20 other cars, and mean Arctic wind knifes me within seconds. Weather always funnels like tides through this bottleneck, one of few gaps in the Alaska Range. My brow hurts with an ice-cream headache, and my hands are dead trout. I forgot the down jacket and borrow flowery fleece from a friend who drove an hour from Fairbanks with her family in their vehicle. I’m now wearing socks inside mitts and a skimpy hat atop bulky upper layers, which, in the truck window’s reflection, makes me look pinheaded and fashion-challenged.

We chose a cold day on purpose, because lace forests grow in Castner Glacier’s guts only at freezing temperatures. Azure gloaming across the Delta River had bathed the snout of nearby Black Rapids Glacier as a low sun tried to part milling scud. My wife and I smile when, igniting a lone summit, it succeeded.

The air calms the moment we drop from the pullout into the bed of Castner Creek, the glacier’s outlet. Inky water rushes under panes crashed at an overflow; tracks hint that a snow-machine foundered here. The procession spread out ahead includes dogs, snowshoe enthusiasts, a kid towing a sled… Walking the well-broken granular trail is like plodding in sand, so I quickly warm up. Still, moisture from the balaclava stuck to my beard rimes my eyebrows and lashes. A fogbow fragment glows at the base of decapitated peaks at our back. Ptarmigan spoors meander drunkenly between willows they fed on, past a rust-and-silver schist boulder of folded phyllo layers. An occasional imprint of fingered wing shows where the ghost birds took flight. Fox pugmarks flesh out the tale.

Fellow sightseers are elated yet subdued, the mood a mere ripple of solstice bonfires or winter carnivals. Everyone seems relieved to have escaped their dens and the doom-cycle of Covid news and voting-fraud rumors. It’s mid-December, winter’s pit, but we’ll gain minutes if not composure before long, once the sun tilts higher again. Stepping off-trail for oncoming traffic, holding my breath while hikers pass, I sink up to my knees. We do chat with our friends, who, masked against frostbite and viral loads, these days live as shuttered as my wife and I.

The glacier’s terminus looms suddenly around a bend about a mile from the trailhead. Its mouth is a whale shark’s toothless yawn, larger than expected.

We enter, modern Jonahs, and it turns into a scalloped Quonset-hut hangar shading from aquamarine to lapis. Charcoal-gray grit veins walls encasing rocks and snarls of glass vermicelli here and there. Grist from the eons’ grinding dusts the carapace underfoot, though it remains slippery. Milky discs dapple it, air pockets arrested till spring. 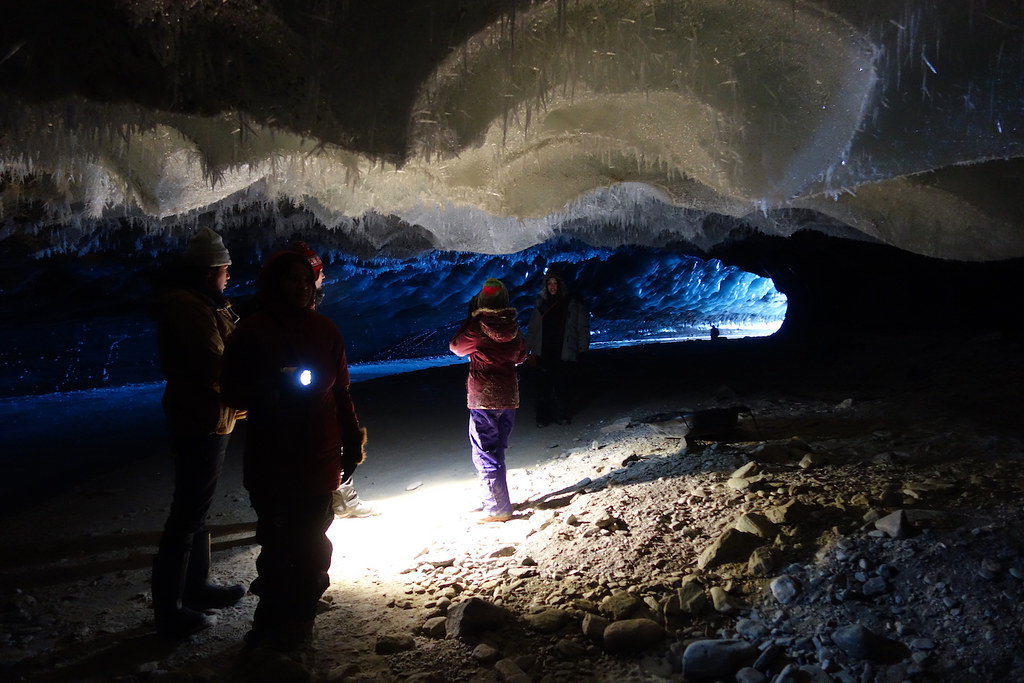 Near the deepest part of the cave, sprays of foot-long hoar feather above us, serried frost sequins sparkle like transparent razor blades. 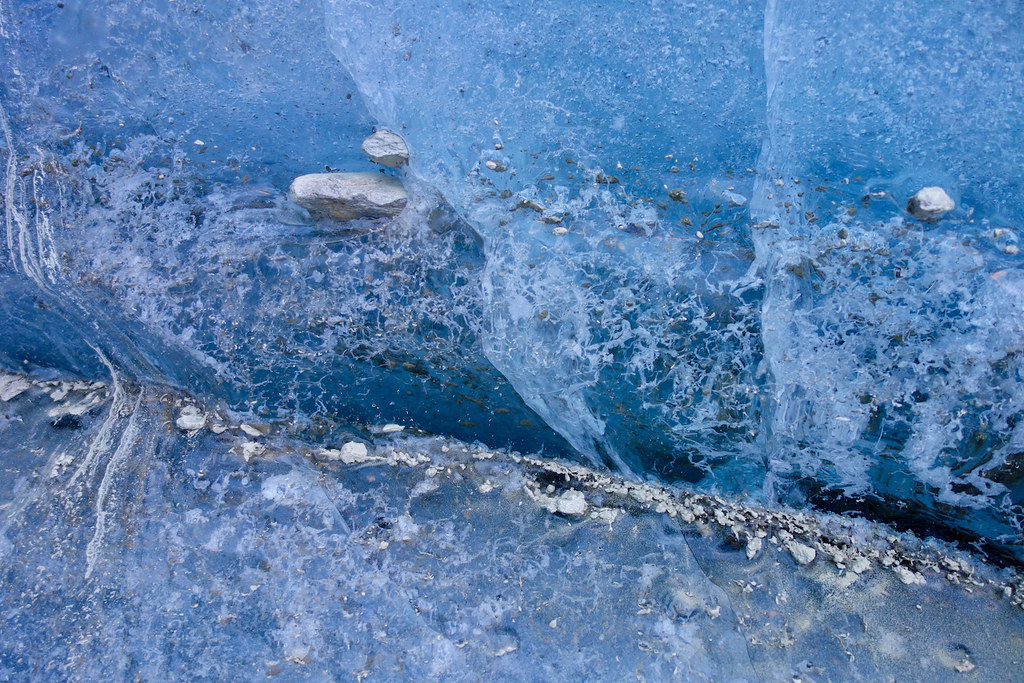 Details in the ice at the entrance. Charcoal-gray grit veins walls encasing rocks. 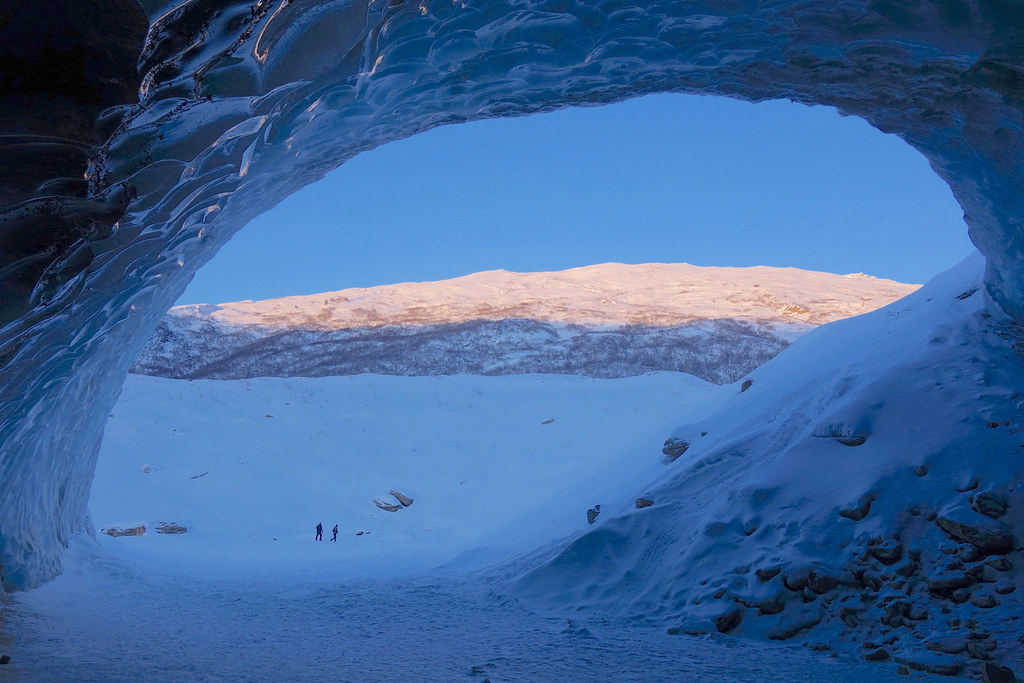 With our perspective reversed, human figures appear as black cutouts backlit by the blinding-white exit. Light at the end of the tunnel.

It’s ten degrees colder inside. My ungloved fingers fumble with the camera. When the last shreds of light surrender to darkness, we click headlamps on.

A strange museum-atmosphere reigns. Clusters ooh and aah, together but alone, each steam-puffing social bubble percolating separately. Pale beams pick out random details. Enchanted voices echo dully, muffled and ringing at the same time. One guy is ice-skating — it was on his bucket list, he tells someone. A thin ten-yard fracture makes me question the rink’s soundness.

Farther in, sprays of foot-long hoar feather above us, serried frost sequins sparkle like transparent razor blades. A boy knocks down a glitter shower. The father asks him to stop. Exhalations in ice-age caves housing murals of lions and bears corrode the art. Visitors’ breathing in this alpine fridge builds it. In a likely future, however, such wonders soon could be history. Although the Castner retreats much more slowly than neighboring flows because of our species’ collective vapors, it thins almost as fast. This isn’t foremost an aesthetic problem of course. Warm-blooded life in a glacial vault is as common, and as comforting a thought, as fallback Earths in outer space. 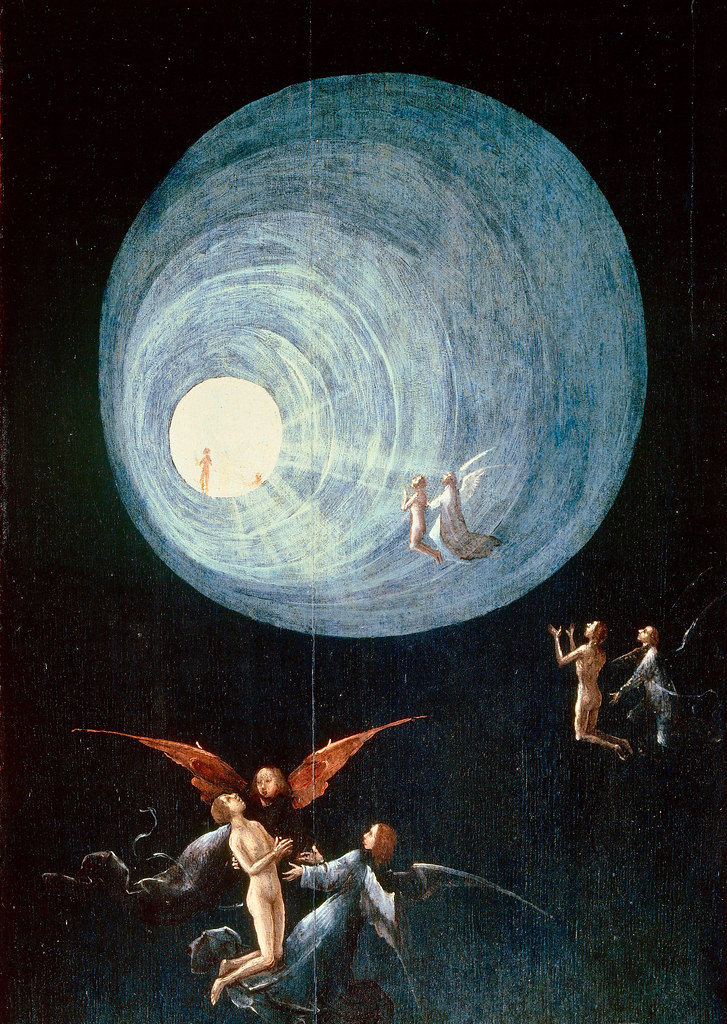 In Visions of the Hereafter (detail) the Dutch painter Hieronymus Bosch glorified angels lifting the naked, fragile departed toward the proverbial passage.

The whale-shark throat tightens as the ceiling descends. I accidentally brush against hanging crystals. Gully rumblings of water in some deeper, even less knowable place, sound ominous.

With our perspective reversed, human figures appear as black cutouts backlit by the blinding-white exit. Light at the end of the tunnel. Until this year, this very instant, I never experienced or really grasped this metaphor born in an era of steam trains and gaslights. The image, older by far than the phrase, conveys near-death perceptions. In one of four panels of his altarpiece Visions of the Hereafter, the Dutch painter Hieronymus Bosch glorified angels lifting the naked, fragile departed toward the proverbial passage. Anecdotes based upon dying neurons firing mysteriously, on fading energy tickling the visual cortex, may have been Bosch’s inspiration.

Post-election, the physical climate notwithstanding, with a vaccine at last being issued, the promise of light, like beauty, keeps us going. Perhaps there will be a world like the one we already envisioned, one where people are not just disease bearers or faceless shapes. One in which glaciers and kindness, wildness and refuge, pikas and civil liberties, can survive. We still have a choice: do we want Bosch’s teeming if crackled garden of earthly delights or his ruinous hell?

Michael Engelhard is the author of Ice Bear: The Cultural History of an Arctic Icon. He lives in Fairbanks, Alaska.