On Tuesday night, the eve of Occupy Oakland’s shutdown of the fifth busiest port in the United States, a strange blast of warm wind came up from the Central Valley, over the Oakland Hills and down to the Bay. It was like the No Cal version of LA’s weird Santa Annas, the kind of weather that makes people wired. “This is earthquake weather,” said my girlfriend, Nell Greenberg (who, full disclosure, is the communications director at Rainforest Action Network). “This is when you have earthquakes.” 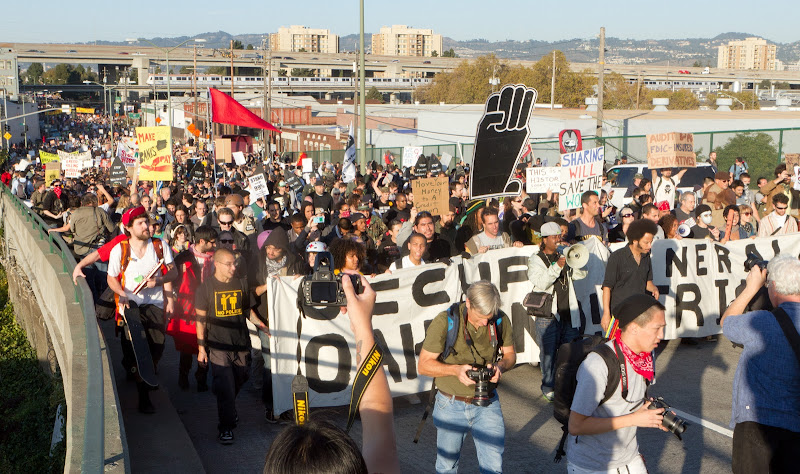 All photos by Ian UmedaProtestors sweep over a bridge on the way to Oakland Port.

At the risk of a totally obvious and over-the-top metaphor, it did for a second seem like the ground moved during Oakland’s “general strike.” For me the moment came sometime around 6 pm on Wednesday evening. I was standing on the overpass at the Port of Oakland’s Middle Harbor Road and, perched right above the train tracks, could see, to the west, college kids on top of the railway cars and, to the east, a column of a couple thousand people marching to join them. A half-dozen semis were parked in the middle of the road, throngs of people all around them. On the cargo container roofs were silhouettes of protesters, dancing and waving flags.

Three girls walked past, the word “occupy” painted on their faces in blue. I asked if they had skipped school to be there. They had. Walked out of Berkeley High at noon. When asked what they thought of the protest, one girl, a redhead, said: “I dislike how it’s become a free-for-all. But the part everyone agrees on – taxing the rich and having better schools and health care – that I’m totally in solidarity with.”

Yesterday’s Occupy Oakland mass mobilization blew my mind about 45 minutes after I arrived at Frank Ogawa-Oscar Grant Plaza in the early afternoon. I was near the Day of the Dead altar and the Food Justice teach-in, not far from where author-activist Raj Patel was handing out plates of apple-and-feta salad and local bread. (“It’s a day when struggle doesn’t feel like it,” Patel said.) Across the way, Teamsters Local #7 was grilling up burgers and dogs. Behind one of the plaza oak trees folks from an outfit called “United Roots” were playing Dr. Dre. It all felt so … Oakland.

Then it hit me: the expectation that a spontaneous protest movement have a single, laser-like message is about as fair as asking a city to have a single message. The world is more complicated than that – there are a lot of things to talk about. We don’t expect a political candidate or a political party to have just one thing to say. So why should this still-infant political movement be asked to speak in an unprecedented unison? Every individual has multiple concerns. Same with a collection of individuals.

At the very least what a political movement needs is some kind of systemic critique that ties together multiple concerns. A worldview, if you want to get fancy about it. An argument, if you want to keep it plain.

The Occupy Movement on display yesterday in Oakland has plenty of argument and worldview of for anyone paying attention.

It was there in the signs, obvious protests against inequities. Some of my favorites:

Jesus Would Occupy Too

And it was there in the main chant I heard, which was simple and spot-on: “The Banks Got Bailed Out, We Got Sold Out.”

Best of all, the whole Occupy Movement still feels like it came out of nowhere.

“It’s mesmerizing, and it’s about time,” Karen Washington, a graceful woman who works as a bookkeeper for non-profit groups, told me while leaning on a granite column near the medic station. “I guess it took everybody being affected before they finally said, enough is enough. This is the movement we’ve been waiting for.”

“Oh, I’m too old to march,” Washington, 64, told me. “But I’m not too old to be a body out here.” A minute later she said: “Oh, it’s wonderful in that people seem to show that they really care about more than themselves. They care about others.”

The mood all day was of a giant exhale, as if a collective itch had been scratched, people just waiting for someone to point out the obvious – you know, the emperor being buck naked and all that.

The first wave of marchers had just left downtown. We were crossing the 880 overpass on our way to the port when I heard a woman behind me say: “This really is a people’s march. There’s no bullhorns.” She was right. The march for the most part was quiet, as if the crowd was carrying the weight of indignation.

The expected factions were all there: The Code Pinkers with their “Make Out, Not War” stickers; SEIU members in purple shirts; the UFCW members carrying an “Occupy Wall MalMart” banner.” But what made the protest unique was its ordinariness. There was a solid contingent of Bro-Dudes, loads of college students, and plenty of school teachers. There were Mexican guys on chrome bikes, hipsters, professionals. I saw people with ebony-and-silver dreads, and brown dreads, and blonde dreads. I spotted a gray haired soccer grandma wearing a white sweatshirt with sequined stars and stripes, a Guy Fawkes mask backward on her head, and carrying a placard decrying corporate health care. She was smoking a joint and complaining of a knee injury.

Hella Oakland, for sure. The 99% percent out on the streets was 100% community.

For veteran activists, that spirit of neighborliness has to be one of the most inspiring elements of the Occupy Movement. I’ve been chronicling progressive social movements for more than a decade (see my books, with Kevin Danaher, about the anti-corporate movements leading up to the Seattle WTO protests in 1999 and about grassroots environmental efforts), and I have to say that I felt something special about the port shutdown.

I know I’m not alone. “This is the most hopeful time that I’ve seen in 30 years of activism, because it’s the most authentic and organic uprising I’ve seen,” Karen (pronounced Caw-ren) Nyhus, a tech consultant from Petaluma told me as we approached the port. Nearby, some boys had started a pretty good A’s chorus: “Let’s go, Oakland!” Clap-clap/Clap-clap-clap. “Let’s go Oakland!” Nyhus, a self-described climate activist, continued: “We don’t have to make the case for ‘the issue.’ It’s in plain sight to see. [People] are more able to connect issues than I’ve ever seen in my life – and I’m 47. It’s like people have been waiting for this.”

Jamie Guzzi, a fair trade activist I’ve known for years, said: “I have to admit, I was skeptical at first. But this is amazing. I think this is the beginning. This is bigger than we could have imagined on purpose.”

A minute after I parted company with Guzzi, two gay men walked by with their arms around each other’s waists. Their sign said: God Hates Banks.

It must the oxytocin rush. Political protests, at least when they occur in the orange sunset of during Indian Summer, create a kind of euphoria.

I think Ben Browner was feeling some of that. Twenty-six years old. A permaculture gardener in Sebastopol. His sign: Good planets are hard to find. “This like the most amazing, self organized …” He trailed off for about 5 seconds, watching the scene of people clambering on top of semis stalled in the road. “This can’t be stopped. It’s too resilient. There’s too much diversity. It’ can’t be stopped unless we stop it.”

“Dude, I love this vibe, because everyone is so peaceful and happy,” Jermaine Mayfield, a skinny kid with a couple of tats, a crisp brimmed Raiders cap, and a black bandana told me. He’s 20-years-old, enrolled in a government program called Jobs Corps to take culinary classes. He’s never held a job. His sign reads, Stop Watching, Start Marching.“I came out here to show my support, not only to the people of Oakland, but to everyone in the country.”

Down the road I find Bill Ross, wearing a jazz festival t-shirt and grinning his face off while taking snapshots of the crowds with an old camera. He says: “Man, it’s beautiful, isn’t it? It’s beautiful.” What’s beautiful?, I ask him. “Finally people are waking up to the fact that they are being burned. I am happy to see what I am seeing.”

Me too. And I really liked the political reggae that the guy with the bike stereo was jamming as we marched through the West Oakland housing projects. But even in California you can’t build a movement on good vibes alone.

I share the hopes of a fellow I met named Dan Stringer, a tutor and grad student. “It’s exciting to see so many people approaching this from different issues,” he said. “I hope it will lead to something concrete.”

For a movement (at least judged by the signs today) whose most commonly shared sentiment is a hatred of the banks, it seems to me that “something concrete” will have to go beyond blockading local branch doors, as happened today. We have to take back the money that the banks grabbed in the bailouts. A lot of it’s ours anyway. It’s sitting in our checking and savings accounts. A national Move Your Money day of action planned for just a day from now will be a crucial test of the movement’s ability to escalate.

Amid a day of indelible images, this is what I think will stick with me most:

A father, walking down the sidewalk with his two sons – say, 10 and 7 years old. They’ve all got the same jeans on. Tennis shoes. Baseball caps. Backpacks. A little familial Boy Scout troop.

The man is carrying an upside down flag: the signal for a republic in distress.

All photos by Ian Umeda