Social justice doesn’t often result from spontaneous demonstrations or an impulsive rush to the streets. It comes from long-term investments in organizing, community building, and grassroots campaigns. Activism requires a lot more meetings than marches.

But now and then, it’s the right time for a march. And on the issue of climate justice, we’ve come to such a time. The New York City Environmental Justice Alliance (NYC-EJA), a network of community-based organizations in low-income communities of color throughout NYC, has joined together with organizations around the world to call for a People’s Climate March this September 20-21 right here in NYC. So start lacing up your marching shoes and I’ll explain why now is the time for action. 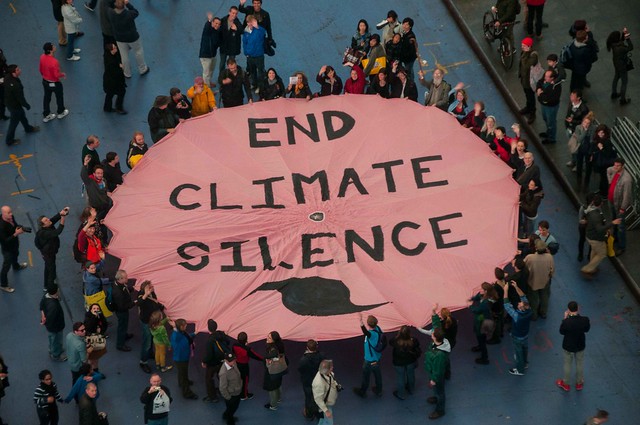 Photo by Adam Welz/350.orgTimes Square Connect the Dots action before Hurricane Sandy in October 2012. Mass mobilization is one of the best ways to shock the entire system into action.

For decades, NYC-EJA has seen firsthand the true cost of the unsustainable and dirty energy economy that is fueling the climate crisis. And we’ve fought back—and won. We successfully pushed the city to radically overhaul its Solid Waste Management Plan, which will reduce vehicle-miles traveled in NYC by 5.5 million miles. We advocated for NYC’s Greater Greener Buildings Plan, the nation’s first comprehensive package of legislation aimed at improving energy efficiency for large-scale buildings. We advised Governor Cuomo and the New York State legislature on a power plant siting law that prevents additional pollution in environmental justice communities. And much, much more.

This is the work we’re going to keep on doing for decades, until every child in New York City can grow up in a safe and healthy environment with access to the opportunities he or she needs to thrive. We’re in this game for the long haul. But even while you’re playing the long game, sometimes you’ve got to make a hard drive. And that time is now.

Scientists tell us that we’re running out of time to solve the climate crisis. And a global solution will require more than just personal actions like switching to energy efficient light bulbs, or riding a bike to work. Preventing climate catastrophe requires fast, mass action, and involvement at every level of government and civil society. Right now.

Mass mobilization is one of the best ways we know of to shock the entire system into action. Mass marches don’t always work: we weren’t able to stop the buildup to the war in Iraq. But they sometimes succeed in historic ways. Take the 1982 anti-nuclear march, which pushed a hawkish Ronald Reagan to strike a deal with Russia and start reducing nuclear warhead arsenals. Or consider the 1963 March on Washington, which helped pass the Civil Rights Act.

This September, the world’s presidents and prime ministers will gather at the UN Headquarters in NYC for a climate summit meant to jumpstart national and international climate action. The summit is the right moment for us to show our politicians what real leadership looks like. If we can put hundreds of thousands of people in the streets to call for climate justice — and lift up the voices of the frontline communities most impacted by the crisis — it could be the shock to the system that we’ve all been waiting for. It will show politicians that the climate crisis isn’t some abstraction, that it’s a burning public priority they must address immediately. No more false-promises and fancy-rhetoric; we want real action now.

The People’s Climate March can help build momentum for climate action around the world, as well as right here in New York City. Our communities have the solutions to this crisis, but we need the funding and support to make them happen. That’s why it’s essential that you come out this September 20-21. Your presence will help far beyond the march, energizing our work for years to come.

Building the world we want to see will take years. But we’ve got a chance to make real progress on fighting climate change in just a matter of months. It’s only going to work if you come out and join us. See you in the streets.