Dan Thompson has dedicated 25 years to rescuing the Blanding’s turtle from the edge of extinction.
Jennifer Taylor

When Dan Thompson was a boy in the 1970s, he often tagged along with his father to watch trains. They lived in suburban DuPage County, Illinois, about 25 miles west of Chicago. During those days, there weren’t too many trains passing by, so Thompson started taking notice of the natural world around him. Adjacent to the rails there were open fields, wooded areas, and long, lazy stretches of time between locomotives, when wildlife like deer and turtles would carry on despite the presence of human observers.

Dan Thompson, right, with his team in the DuPage County marshes. Photo courtesy of the Forest Preserve District of DuPage County.

“When you’re just sitting still in an area, the wildlife tends to come to you,” Thompson says. “You start observing them before they are even aware you’re around.”

Nearly 50 years later, Thompson is an ecologist for the county’s Forest Preserve District, still exploring the same landscapes he did as a child. But he’s no longer just watching wildlife. He’s trying to help it survive.

Outfitted in chest-high waders, Thompson and his team set out into the marshes of the county’s forest preserves to trap, track, and release female turtles. For more than 20 years, this has been their springtime ritual, and part of a “head start” program created by the district as a way to help a struggling species. They are looking out particularly for a species called Emydoidea blandingii, or Blanding’s turtle, which once thrived throughout the Great Lakes region.

At adulthood, the semi-aquatic turtle measures about 10 inches from end to end of its slightly speckled, domed upper shell. Its most distinguishing characteristic is its vibrant yellow chin and throat. But it is the notched upper jaw with an up-curved mouth that leaves a constant impression of a smile, a characteristic 55-year-old Thompson particularly appreciates.

“They always look happy,” he says. “But I know they’re not.”

Researchers have established that habitat fragmentation, predators, and climate change have made life increasingly hard for the turtle. As human populations have expanded in the region, the turtles have lost 85 percent of the wetlands that serve as their primary habitat as well as 99 percent of the prairie land they once relied on for nesting sites. Today, the species is found in only 22 percent of its former range, which extends from southeastern Ontario, adjacent to Quebec, and southern Nova Scotia, south into New England and west through the Great Lakes to Nebraska, Iowa, and northeastern Missouri. The population has declined so rapidly that, in 2009, its status was changed from “threatened” to “endangered” by the Illinois Endangered Species Protection Board. According to the Prairie Research Institute, Blanding’s turtle has a 95 percent chance of being extinct in 50 years.

“It’s an old story,” says Thompson. “We can take a healthy population of a species and we can make it a threatened or endangered species without much effort, because we didn’t plan ahead to minimize impact on the species.”

In the early days of the head start program, the only Blanding’s turtles that the scientists trapped were adult turtles. To Thompson, this was a tell-tale sign the population was dramatically out of balance. “There [were] no sub-adults,” he said. “There [were] no juveniles. What’s going to happen when these adults die? The population will be gone.”

For 15 long years, Thompson saw no significant change within the population. One reason was that the turtles’ long lives — they can live up to eighty years old — masked demographic changes. Their long lives also make them harder to conserve: Turtles that don’t reach reproductive age until they’re between 14 and 20 are slow to reproduce. Much of the population is eaten by predators at a faster pace than it can be replaced.

But Thompson was determined. He and his colleagues came up with a plan — a savvy synthesis of technology and biology, targeted at the female turtles. Since the spring of 1996, the team has been using tracking devices to locate the females before they lay their eggs. They then capture the females, collect the eggs, and incubate them in the lab. By controlling the temperature in which eggs mature, Thompson can influence the gender of the hatchlings that will come out of them. Females are produced at around 30 degrees Celsius, while males are born from eggs and at a few degrees cooler. The goal, according to Thompson, is to produce more breeding females. 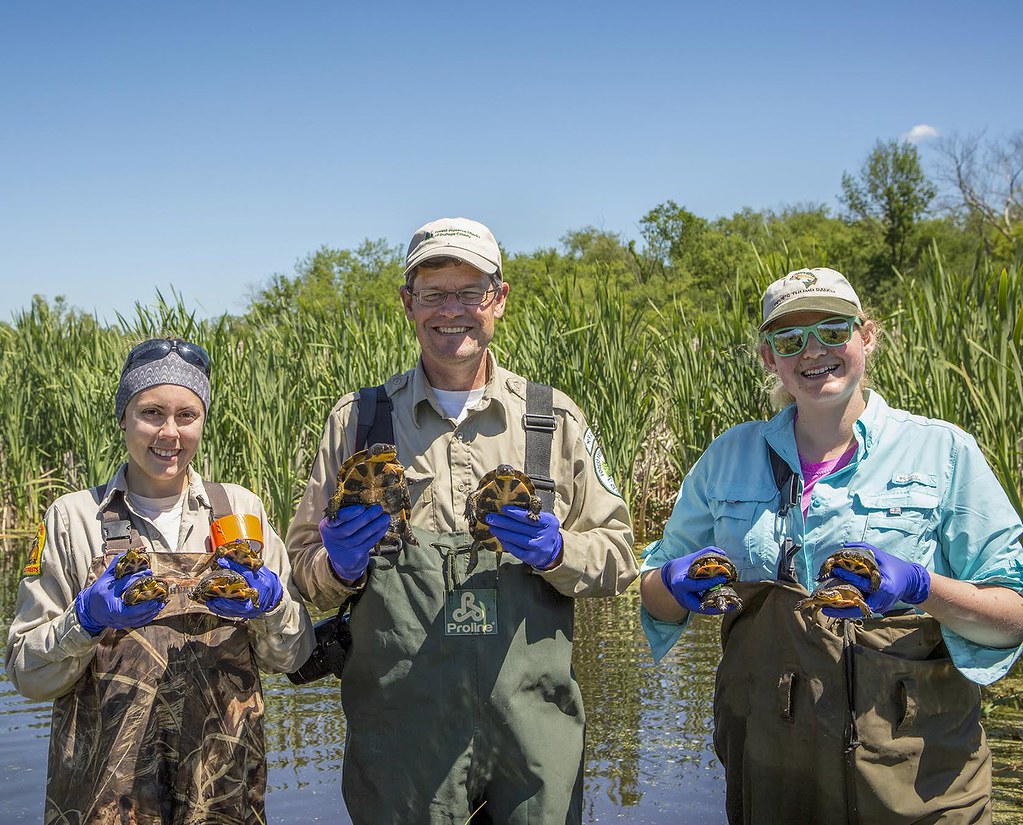 Thompson, center, at a 2017 hatchling release. Photo courtesy of the Forest Preserve District of DuPage County. 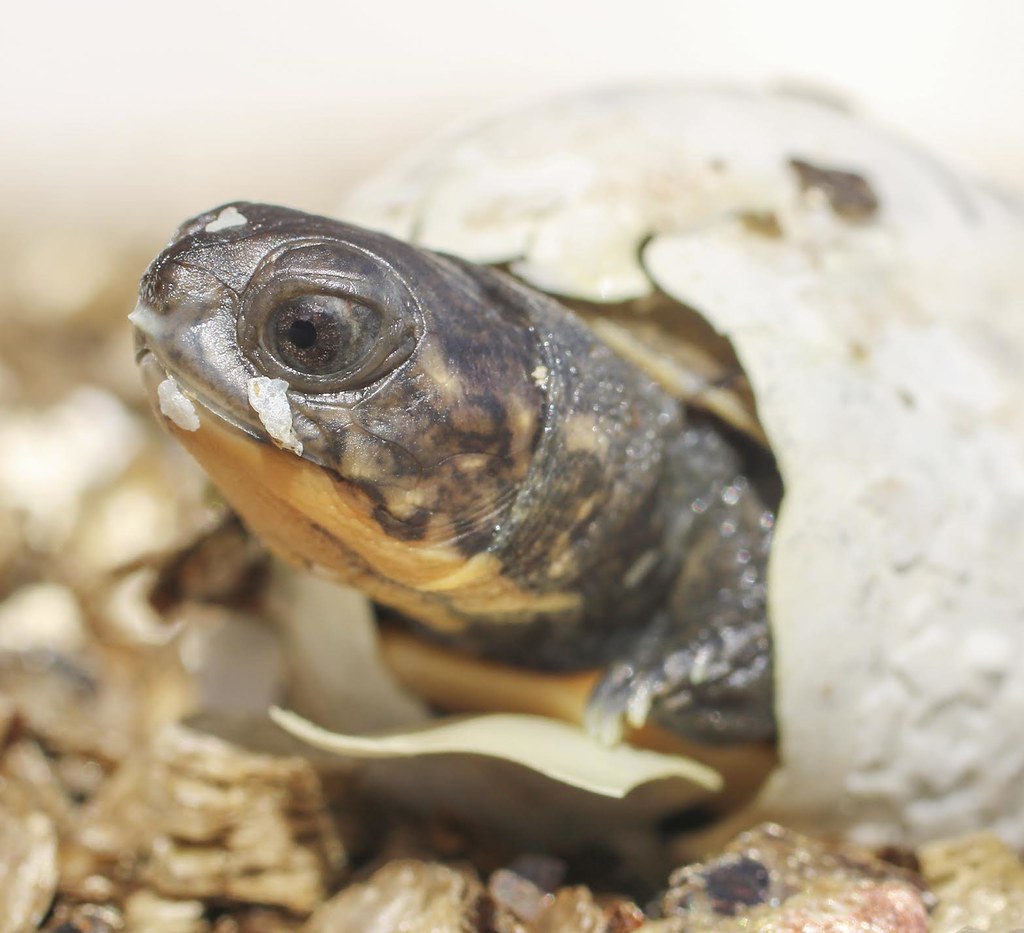 By the end of the year, Thompson predicts that his program will have hatched nearly 3,900 Blanding’s turtles. Photo courtesy of the Forest Preserve District of DuPage County.

Once the collected eggs have hatched, the turtles are kept and reared for about a year by Chicago-area partners of the program, which include Cosley Zoo, Brookfield Zoo, and the Shedd Aquarium. Then, they are released back into the wild. By the end of the year, Thompson predicts that the program will have hatched nearly 3,900 Blanding’s turtles.

Still, threats to Blanding’s turtles continue outside the laboratory. Female turtles migrate long distances to nest, and too many are hit by cars as they cross roads and highways. Others, especially eggs and hatchlings, are eaten by racoons, skunks, and opossums — predators that have adapted easily to human landscapes, expanding their numbers as we do.

About an hour’s drive north of DuPage, Lake County Forest Preserve’s Chiwaukee–Illinois Beach Lake Plain is the largest Blanding’s turtle natural habitat in Illinois. Here, biologist Gary Glowacki and his team are addressing predator-related threats by setting up protective mesh cages around turtle nests and removing raccoons by trapping and euthanizing them. “To allow the raccoon population to go unchecked, they would completely decimate some of the other native wildlife,” Glowacki says. “Our job as land managers is to try to protect that biodiversity the best we can.”

In DuPage County, Thompson’s captive bred turtles still face these threats — as Thompson is all too aware. He once named a grouping after his mom and three sisters: Norma, Janet, Annette, and Karen. “One year, [the turtles] were all together,” Thompson says. He considered taking a “family portrait” of the four, but instead called it a day. “The next year, I found the turtle named after my mom dead. And I’ve lost two of my three ‘sisters’ since. It really does show how hard it is out there.”

But Thompson says the outlook for Blanding’s turtles is encouraging. In 2014, for instance, DuPage County first captured, in the wild, a turtle raised from a hatchling in the head start program, which Thompson saw as a sign of hope. “We hadn’t seen that turtle in eight years or so,” he says. “And not only that, she’s an adult female and she was full of eggs.”

Now, Thompson often finds recently released juvenile turtles, and even turtles pushing eight to ten years old — a maturity threshold that increases the likelihood of survival and reproduction. Twenty-five years into Thompson’s Blanding’s turtle program, he now estimates there are 250 to 400 Blanding’s of various age ranges in the DuPage County population, compared to the 50 or fewer adult turtles when his work first started. And data now suggests that all age populations of Blanding’s turtles in Lake Plain are growing.

Even with the numbers climbing, the species is still endangered in Illinois. And the upward trend isn’t a sure thing. The reality is, if the head start program was abandoned now, the Blanding’s turtle population would dwindle to where it was before. At best, the program has helped offset the known loss of wild adult turtles by building up populations of juveniles and sub-adults.

At some point, Thompson will hand off his work to a younger generation of conservationists. “Does it worry me? Yeah,” he says. “What if it isn’t embraced and they go a different direction and things don’t work well and it declines?”

Even so, when Thompson traverses the familiar landscapes of his youth, he is cautiously optimistic about the future. As another season approaches, he is reminded of the quiet, magical moments of the job. In the stillness when he’s wading through the marsh, sometimes he’ll feel a turtle brush against his leg or foot. The wildlife, again, just coming to him.

Jennifer Taylor is a freelance journalist based in Wheaton, Illinois. Her writing has appeared in such publications as CBSNews.com, Chicago Tribune, The Kansas City Star, and TreatmentMagazine.com, among others.