Jamaica is famous for its many beaches, rivers, and mountains. But it is the Cockpit Country, the island’s largest contiguous rainforest, that stands as the region’s most beautiful, biodiverse, and important natural feature. This ecological marvel is home to indigenous communities, countless plants and animals, and the source of much of Jamaica’s freshwater.

In 1738 the British empire granted control of all this land to the Jamaican Accompong Maroons — a community that comprises Indigenous West Indians, Africans who arrived here pre colonization, as well as runaway slaves. Since then, the region has been safe from mining, logging and other interests.

But in 2021, Jamaica’s minister of Transport and Mining, Robert Montague announced that the government had revised the Special Mining Lease 71 governing the lands in Cockpit Country open to mineral extraction — specifically the lands available for the mining company Noranda Jamaica Bauxite Partners. Noranda specializes in mining and exporting a metal ore called bauxite which creates aluminum.

The Maroons of Accompong, a village nestled in Cockpit Country, refute this new definition of the boundaries and insist that it encroaches on the established boundaries of their ancestral lands. The history of the Maroons and their stewardship of the Cockpit lands extend into ages long past, when Jamaica was still a colony of the British empire. In 1738, after years of bloody war, it was a Maroon captain who signed a treaty with the British establishing peace and granting them the lands of the Cockpit Country.

In the eyes of the Maroon people, this treaty should still be honored. They say they have long lived in harmony with the environment, building few developments save for a sparse network of residential dwellings and a single road running through forest.

But the lines of communication between the Maroon community in Cockpit Country and the state are strained. Though the Jamaican state gained its independence in 1962, there has been no documentation within the constitution to acknowledge Maroon sovereignty. Any acknowledgement by previous governments has been informal. For decades, the Maroons have operated as an independent people within an independent nation. That independence, in their view, is now being violated.

“The Government of Jamaica has gone and signed over lands to be mined, when they don’t own those ancestral lands,” said Richard Currie, the current chief of the Maroon people in Cockpit Country.

Beyond Indigenous land rights, Cockpit Country is a hotspot of biodiversity. Spanning 500 square miles, the region is a limestone karst rainforest that stretches into three different parishes on the island and contributes to roughly 40 percent of the country’s fresh water. Rivers from four different parishes on the island have their origins and essential pathways running in and out of the forest.

The forest is also nesting grounds and feeding grounds for dozens of species of birds, home to more than half of the island’s 21 species of bats and 37 of Jamaica’s 62 species of amphibians and reptiles. It’s the tropical rainforest, relative to its size, with the most species of fern in the entire world. 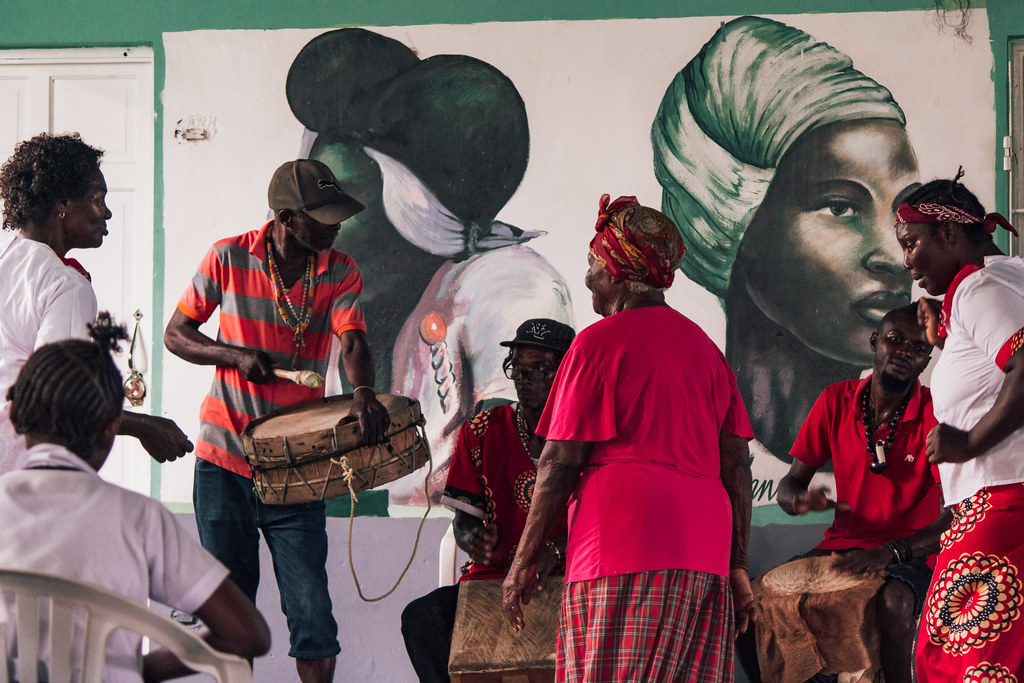 The Maroons of Accompong, a village nestled in Cockpit Country, have long lived in harmony with the environment, building few developments save for a sparse network of residential dwellings and a single road running through the forest. Photos by Gladstone Taylor. 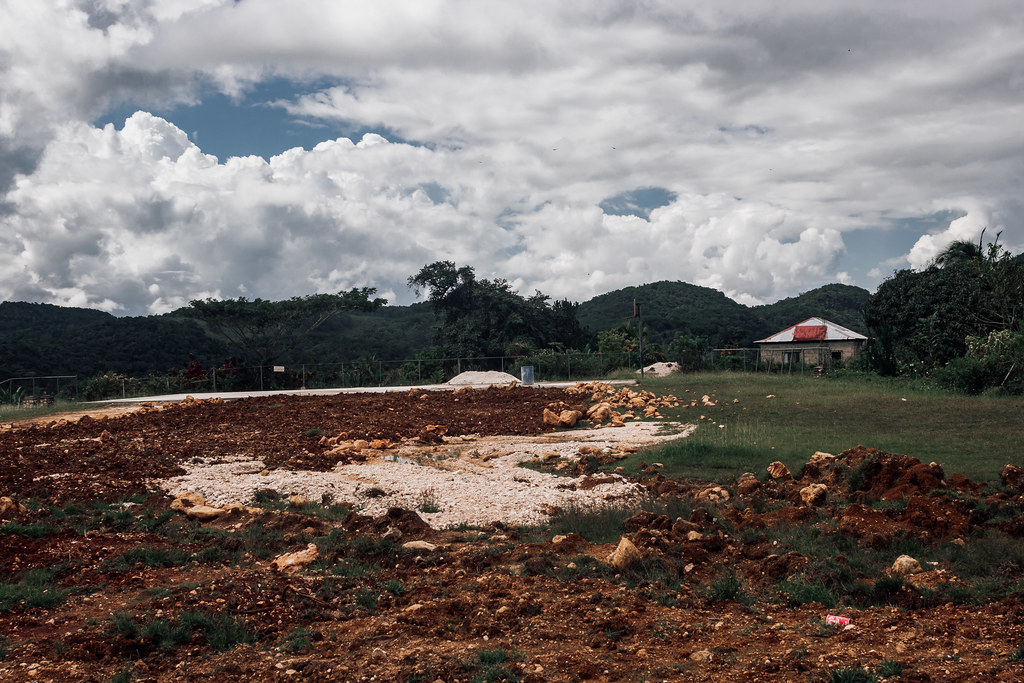 ​A local bauxite mining company, Noranda, has already started some exploratory work in the region. 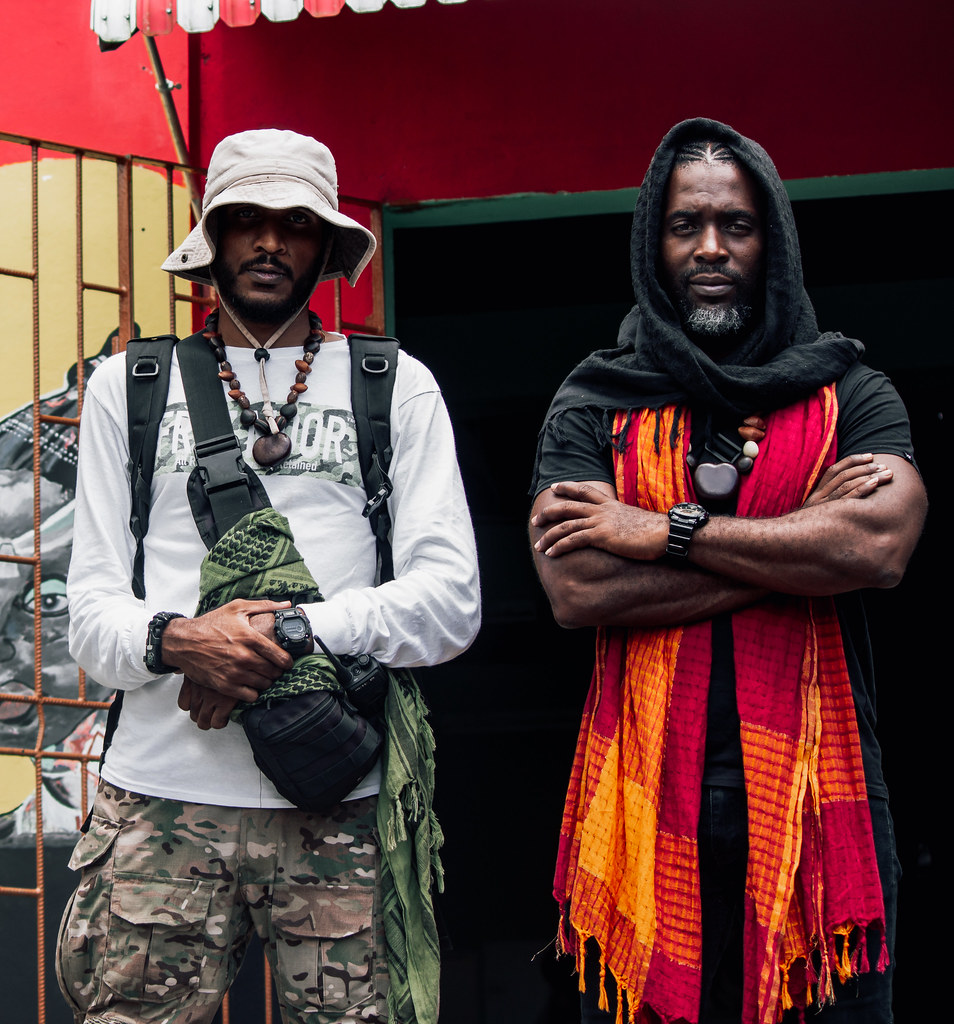 Richard Currie (right), the current chief of the Maroon people in Cockpit Country, says the Jamaican government has no ownership over the Maroon’s ancestral lands.

Professor Simon Mitchel, Head of Department, Department of Geography and Geology, University of the West Indies, believes mining is likely to lead to species endangerment and mass dislocation. The forest likely contains untold species with medicinal or other benefits to human society, many of which would likely be destroyed by large scale resource extraction.

An environmental impact statement by the National Environment and Planning Agency revealed that mitigation measures could counter the worst effects of mining. The statement indicated that, as long as Noranda replenished the topsoil after mining, the land would be fertile enough to farm.

But experts like Mitchell say that many of the plants, and the animals which depend on the ecosystem, grow in the forest because of the richness in the soil and the same deposits of minerals that Noranda seeks.

“While you may be able to extract the bauxite and put back farming soils, what you do is damage the natural forest that is there,” Mitchell said.

Biodiversity isn’t the only environmental concern. Cockpit Country sits at the mouth of water aquifers of six major rivers. Should mining accidents occur here, it could poison and contaminate the water supply of four parishes, endangering the health of hundreds of thousands of people. Jamaica’s major population centers like Hanover, Trelawny, St James and St Elizabeth, would all stand to lose access to clean water.

As rising sea levels due to climate change lead to more frequent, powerful storms, and coastal flooding, the value of high grounds like Cockpit Country will grow. Climate change adaptation plans by Barbados, indicate that migration from vulnerable coastlines to inner island masses are likely to increase in the Caribbean.

“Forests play an important role in reducing the negative effects of climate change and are a key cost-effective solution to tackling these challenges,” said Francine Richard-Black, the senior director of communications for Jamaica’s Forestry Department.

The Maroon people have filed a lawsuit against the Jamaican government for violating the 1738 treaty by opening Cockpit Country to mining interests. As the lawsuit plays out, state ministries like the Ministry of Economic Growth and Job Creation, with which the environment ministry was recently merged, have gone virtually silent, declining interview requests.

So far, the Government of Jamaica has refused to address the lawsuit. The case was scheduled to appear before Jamaica’s supreme court on October 4, but the Jamaica government did not show up for the hearing. The judge issued a new court date for October 19, which was later rescheduled for December 9th after government representatives failed to appear before it yet again.

It’s unclear how the lawsuit will unfold, but the future of Cockpit Country may rest on its outcome, and who is given the right to steward the land.

This story was produced with support from the Pulitzer Center.

Gladstone Taylor is an author and journalist living and operating out of the creative industries of Kingston, Jamaica. He has been writing professionally for over eight years. He’s reported on the environment, culture, music, film, and tech through platforms such as Mongabay, The Fader, Sole DxB, Bandcamp, The Face Magazine, RollingStone, Afropunk, Syfy Wire, and PopDust, to name a few. He is a member of Covering Climate Now and the Uproot Project.