Swimming with whale sharks, a popular tourist activity, is raising concerns about impacts on the world’s largest fish
Josh Gabbatiss

Big fish are big business on Isla Mujeres. Aside from its traditional offers of sun, sea, and sand, this 2,000 foot-wide island off the coast of Cancun has garnered a reputation for being a hub of Mexican whale shark tourism. 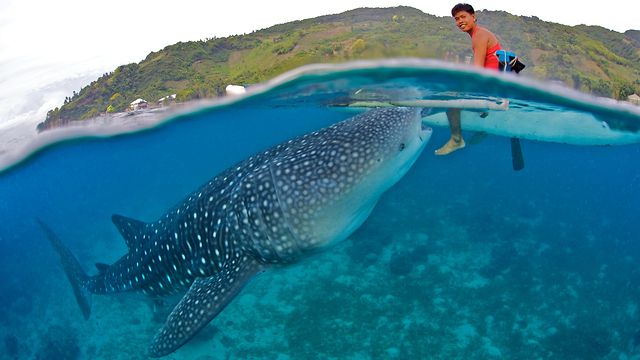 Photo by Janey A whale shark in Oslob, Philippines, where guides have come under fire for feeding whale sharks and encouraging interaction between people and the large fish.

The opportunity to swim with the largest fish in the world was one that I didn’t want to pass up, so when I was traveling last September, I made a point of delaying my journey into the heart of Mexico to go searching for sharks. Once on the island, every hostel, dive shop and bar seemed to offer whale shark tours, and it’s no wonder: at around $120 per head, there is serious money to be made in this game.

But the night before my planned tour, I was wracked with self-doubt. What kind of ecotourism was this, where the opportunity to see such majestic creatures was offered in the same breath as a deck chair rental or a fruity cocktail? How could tour companies offer “guaranteed sightings” of one of the most enigmatic denizens of the ocean? Most importantly, what effect was this having on the sharks?

In the end, I backed out, but I was unusual in this respect. Every year, Roddrigo Sidney, owner of Cancun Whale Shark Tours and self-styled “Whale Shark Daddy” says he takes more than 3,000 tourists out on the water to see these enormous fish. His is just one of many official and unofficial whale shark tourism companies operating in the area.

The reason tourists flock to Isla Mujeres to see whale sharks is their sheer concentration off the coast. During the summer season, these solitary fish gather in large numbers to feed on dense blooms of plankton that appear in the Caribbean waters. Such congregations are not unique to Mexico, however, and similar tourist economies have developed at other hotspots in Mozambique, Honduras, the Philippines, and elsewhere.

With such natural splendor at their disposal, it’s unsurprising that entrepreneurial locals have seized the opportunity to sell such a special ecotourism experience. The question that remains is how “eco” the opportunity really is.

Like me, German traveler Robin Moran headed to Isla Mujeres when he heard about the sharks. “I had been looking for a whale shark experience for seven years, since I first heard about rare sightings in the Gulf of Thailand on diving trips,” he explains.

Finally, in Mexico, Robin got the chance to live his dream, and he soon found himself on a small, rickety powerboat heading out to the deep sea.

“You sit on the railing and wait your turn, until the guide tells you to jump. Then you lose yourself in the unknown. In my case, that turned out to be 10 centimeters in front of a whale shark eye,” he recalls.

Looking back on it now, Robin has mixed feelings about the experience. The tourists in his group were offered minimal guidance when it came to whale shark etiquette, and seemed to care more about snapping selfies than animal welfare. Officially, there were meant to be restrictions in place about numbers of people and boats to a shark, but these were ignored. The whole affair quickly devolved into “an unruly mess of legs, life jackets, GoPros, and fin chops in your face.”

While it’s difficult to gauge how the whale sharks feel about these human additions to their feeding frenzy, they appear to be voting with their fins. Several studies have demonstrated that whale sharks actively try to avoid tourists, rapidly diving or rolling away from these perceived threats.

Whether this translates into long-term effects on the fish is unclear, but Konrad Madej, Director of the Whale Shark & Oceanic Research Center in Utila, Honduras, has certainly observed a lasting shift in the behaviour of the local whale shark population. These sharks target “bait boils” — large shoals of fish pushed to the surface by other predators — and with divers keen to meet whale sharks, dive boats have begun targeting these boils too.

“It’s basically like someone sitting on your dinner plate while you’re trying to eat,” says Madej. “If that was me, I’d obviously go somewhere that didn’t have people sitting on my dinner plate.” And so, with the increase in visitors to Utila, there has been a corresponding decrease in whale shark sightings near the island.

In Oslob, Philippines, the situation is far more worrying. Local guides have come under attack for feeding whale sharks and encouraging interaction between people and sharks. This not only disrupts normal whale shark behavior and migration patterns, but could make these magnificent animals reliant on humans for food.

Whale shark tours are endorsed by respectable sources such as Lonely Planet as a “must-do” activity. While the cost of a tour might be prohibitive for thrifty backpackers, for many it is a price worth paying for “the experience of a lifetime.” Without adequate attention to conservation, this type of publicity could have serious implications for whale sharks.

When done right, ecotourism can be beneficial to organisms, ecosystems, and people alike. While far from perfect, the ecotourism economy of Costa Rica, for example, has been lauded for being both environmentally friendly and lucrative for local people.

In the case of the whale sharks, Madej thinks that stricter regulation and enforcement could put the “eco” back in “ecotourism.” “Humans are greedy,” says Madej. “If there’s no one regulating them, people break the rules.” In Mexico, the government has, in fact, enacted laws to protect whale sharks in coastal waters, but according to Sidney, there are plenty of unofficial tour operators taking boats out illegally to see the fish. “At present, the authorities lack the resources for enforcement,” he explains.

It doesn’t have to be this way. Dr. Simon Pierce, Principal Scientist at the Marine Megafauna Foundation, has spent over a decade studying whale sharks in Mozambique, where according to him, responsible ecotourism practices prevail.

Furthermore, Pierce says that similar operations in western Australia are even slicker. “Australia is the world leader in management of whale shark tourism,” he explains. “They have a regular on-water observer presence, vessel monitoring systems, strict licensing conditions and make consistent, evidence-based improvements.”

The best system is one that ensures low impact on the wildlife, and that requires well-trained guides who are incentivized to stick to the regulations. Also, Pierce adds, ideally the sharks themselves should benefit too, through research, management, and conservation initiatives associated with tourism revenue.

When done well, the animals are relatively unaffected, the tourists have fun, and the guides make money. Everybody wins. Hopefully, Mexico will arrive at this balance soon by way of the government’s new “Plan de Manejo” – Management Plan – which will set out tourism permit laws for 2016.

Meanwhile, as responsible tourists it is crucial to be aware of the more subtle impacts our actions might have on local environments, to approach ecotourism opportunities with a critical eye, and to stick to those in which interactions with wildlife are kept to an absolute minimum.