Is Plant Science the Answer to Improved Food Security?

In a world of climate change and growing global population, some researchers believe plants are key to adaptation
Sena Christian

Nigel Taylor spreads apart the wilted and discolored leaves of a cassava plant. He wants us to see its sickness on full display. Taylor leads a team of scientists in St. Louis attempting to genetically engineer a virus-resistant version of the plant, and is working with researchers in Uganda and Kenya, where cassava is a staple crop. Once created, this plant will be delivered to small-landholder farmers for widespread use in parts of sub-Saharan Africa. 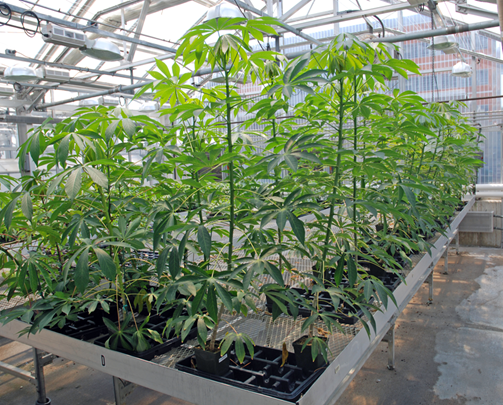 “Cassava is an incredibly important source of calories in the tropics,” Taylor explains to a group of journalists visiting the Donald Danforth Plant Science Center in Missouri in early May. The ultimate goal of this not-for-profit center, founded in 1998, is to double production of the world’s most important crops while lowering agriculture’s environmental footprint. More than 200 employees are on the case, and for these scientists, answers lie in an obvious place: “We think plants are a wonderful solution to a lot of global challenges,” vice president of research Dr. Toni Kutchan tells us.

Among the biggest challenges is a growing global population expected to reach nearly 10 billion by 2050, which will need to be fed without degrading more natural resources. Other challenges include regions around the world suffering from increased salinity in soil, water supplies tainted with fertilizer, declining crop yields due to plant disease, and intensifying droughts. The agricultural powerhouse of California, for instance — responsible for producing about half of the United States’ vegetables, fruits and nuts — has entered the fourth year of a historic drought with no relief in sight. Danforth scientists are developing crops to withstand these environmental stressors as we brace for the impacts of climate change.

“Human-induced climate change is here and now. It’s not just something we need to think about for our grandchildren,” says Kathy Jacobs at the second National Adaptation Forum in St. Louis, where she joined more than 800 representatives from the private and public sector in May.

Jacobs directs the Center for Climate Adaptation Science and Solutions at the University of Arizona and coauthored the 2014 National Climate Assessment, which evaluates and summarizes the impacts of climate change on the United States. When the report — the third of its kind since the passage of the Global Change Research Act of 1990, which mandated the development of a comprehensive US climate change research program — came out last May, the consensus among its roughly 300 authors was clear: Don’t waste any more time on denial. The science of climate change is well understood and, increasingly so, its impacts.

According to the report, US average temperature has increased by between 1.3 degrees and 1.9 degrees Fahrenheit since recordkeeping started in 1895, with that rise mainly occurring since about 1970.

American agriculture, energy, transportation, public health, ecosystems and biodiversity will all be influenced by rising temperatures. In terms of farming, the crop-growing season may lengthen in some regions, while in others, food production will suffer from heat, drought, disease, and heavy downpours. Where plenty of water exists, its quality may be questionable.

And that’s just the scene in the United States. Globally, the average combined land and ocean surface temperature increased by 1.53 degrees Fahrenheit from 1880 to 2012, according to the IPCC’s fifth assessment report.

Global food security could hang in the balance. As the IPCC elaborates in its report, crop production and fishery stocks are sensitive to changes in temperature, and climate change will lead to shifts in crop yields around the world — overall yields will decrease, but some temperate places at higher latitudes will see increases. Already, some indigenous communities have adjusted their seasonal migration and hunting practices in response to temperature changes. Poorer communities in developing countries will likely be more vulnerable to loss of health and life brought about by a changing climate.

Scientists at the Danforth Plant Science Center hope to address the impacts of climate change on food production and food security, and are working to improve the nutritional content, disease resistance, and yield of staple crops for subsistence farmers around the world. On their list: sweet potato, banana, cassava, sorghum, maize, rice, groundnuts, millet and cowpea. After seeing Taylor’s work, we observe a conveyor system that captures detailed images and provides real-time monitoring of how plants respond to different environment stressors, such as too much water, too little water, too much sun, too little sun, and more, one of many tools the scientists use in their research.

Taylor’s work on developing virus-resistant cassava is largely funded by the Bill and Melinda Gates Foundation, USAID, and The Monsanto Fund. Genetic modification is being used on the plants and “this is the same technology used to save the papaya industry in Hawaii,” Taylor says, which was seriously threatened in the 1990s when a virus infected plants on the Big Island — where 95 percent of the state’s papaya grew. Scientists inserted resistant genes derived from the pathogen into the host papaya plant, just as Taylor’s group has done with cassava. Not everyone in Hawaii, however, was thrilled with the introduction of GMO papayas.

The Virus Resistant Cassava for Africa (VIRCA) project has been conceptually underway since the late 1990s and is now in its second phase — the advanced experimental stage. “We have shown the technology works in the fields through numerous field tests in Uganda and Kenya,” Taylor says.

A persistent challenge, though, is integrating resistance to the multiple diseases present in cassava — there are many — into the cultivar, and not affecting other plant attributes famers value. “It’s not any old bread,” Taylor says. “You want the bread you like.” The project requires more field tests and then will undergo the regulatory process in African countries where genetic modification is new, before the product is released to the farmers. There will be no pesticides needed and “nothing new” for farmers to do in cultivating the two new crop varieties that are part of VIRCA, Taylor says. The technology’s developers won’t receive profit or royalties, and aren’t passing on any costs to end-users.

Another mission at Danforth involves increasing the nutritional value — specifically beta-Carotene — of cassava, a root vegetable high in calories but low in minerals and vitamins.

In 2014, Danforth received a $20 million grant from the National Science Foundation for “The Missouri Transect,” a five-year statewide collaborative of nine institutions focused on the intersection of plants, climate, and community. A portion of that money will fund plant phenomics, which measure changes in an organism’s physical and biochemical traits in response to environmental stressors. Scientists will specifically analyze drought tolerance and water efficiency in maize using what’s called an automated phenotyping facility.

Resistance to drought is high on the list of goals in Missouri, which was at the epicenter of “a drought of Biblical proportions” in 2012, says scientist Todd Mockler. That drought devastated livestock crop production throughout the Midwest and led to a rise in food prices.

“In our project we are conducting basic research to identify traits, [for example] genes, that could be used for crop improvement relating to drought responses and tolerance. But we are not developing the improved crops per se,” Mockler says later via email. “Our hope is that seed companies will commercialize our discoveries.”

Once Danforth finalizes a particular technology, private companies may license it, while the center reserves the right to use it for humanitarian purposes. In the case of VIRCA, for instance, the intellectual property, technology, regulatory, biosafety, quality control, distribution, and stewardship components needed for developing and delivering the cassava will be made readily available by Danforth scientists to interested groups in Africa.

Danforth’s use of genetic engineering in some of its research has led the nonprofit Food and Water Watch to deem it a “pro-GMO research center” and note the facility’s close relationship to Monsanto — both in terms of the funding it receives from the biotech giant and the fact that the company is headquartered across the street. Additionally, Monsanto’s president serves on Danforth’s board of directors.

Opponents like Food and Water Watch don’t agree that GMOs will play a significant role in solving food security problems, and argue that one major drawback is the increased use of herbicides that often accompanies the genetically modified crops. They also argue that GMOs contribute to the growth of resistant “superweeds,” and express concern over how their seeds might travel and cross-pollinate in unknown and unexpected ways.

This fall, Danforth will be joined by another facility using plant science to solve huge global issues when the 45,000-square-foot University of Nebraska Greenhouse Innovation Center opens in Lincoln. The facility will also use an automated phenotyping system that sends plants down conveyor belts to chambers where high-resolution images will capture how the traits of plants respond to stressors.

Plant science is only one example of hundreds of climate change adaptation measures currently underway around the world. But it’s a critical one, especially in the context of a growing global population and threatened food security. Because as these scientists know, we all have to eat, and we’ll need to do so without further devastating the natural environment around us if we hope to live with the ramifications of a climate we have irrefutably changed.

The author’s trip to the National Adaptation Forum was paid for by the Metcalf Institute.