Is China Turning the Corner on Environmental Protection?

Most of the news we hear about China’s environment is depressing, filled with references to the country’s dirty air, water, and soil. Some of it is downright apocalyptic, accompanied by images of environmental destruction that remind me of Dr. Seus’ illustrations in The Lorax. These scenes are the result of lax environmental protection, combined with rapid economic development and fast-paced population growth. Lately, however, a few positive changes in policy and rhetoric have caught my eye, leading me to wonder if China is changing its tune when it comes to the environment. 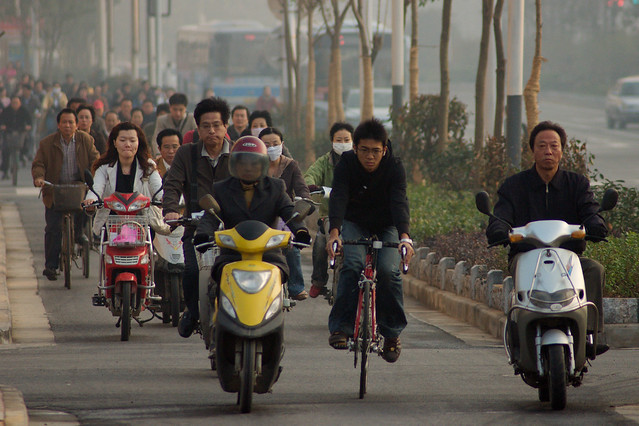 Photo by Markus SpringCommuters in Nanjing, as in other polluted Chinese cities, often wear facemasks to protect themselves from the smog. Concerns about public health are motivating Chinese officials to crackdown on air pollution.

Back in March of this year, for example, Premier Li Keqiang declared that China would “resolutely declare war on pollution as we declared war against poverty.” Shortly thereafter, in April, the country announced significant reforms to the national Environmental Protection Law (EPL). When first enacted 25 years ago, the law was more aspirational than it was substantive. The new amendments, however, incorporate several significant changes that give the law teeth.

One such change is the system for fining polluters. Previously, pollution fines were a one-shot deal, regardless of how long the pollution continued. Under the EPL amendments, fines will accumulate so long as the pollution continues. Fines may now be large enough so as to actually dissuade would-be polluters. “One of the major changes is that [the EPL amendments] increase the sanctions for pollution in ways that might conceivably make a difference if properly enforced,” says Rachel Stern, an assistant professor of law and political science at Berkeley Law, who specializes in environmental regulation and activism in China.

The law also expands the range of public interest organizations that can bring a suit against polluters by providing certain organizations with standing (the right to sue). “The big change from my perspective… is that the law allows standing for NGOs to bring public interest lawsuits, ” Stern says. “And that is a really, really interesting change.” However, only nonprofits that are registered with the city-level governments or higher in China, and that have specialized in environmental protection for five years, will be permitted to bring suits. The standing law thus remains limited, but is a significant step towards citizen enforcement in China.

Changes have also been made at the bureaucratic level. Several years ago, China began assessing local authorities based not only on economic markers, but also metrics of pollution reduction and energy efficiency, which Stern considers to be one of the more promising shifts in recent history when it comes to prioritizing environmental concerns. Although the modifications to the evaluation system for local authorities have already been implemented, the EPL amendments formalize these changes at the national level.

In addition to the EPL amendments, China’s court system has begun to develop a noteworthy environmental arm. Beginning in 2007, provinces around the country began establishing environmental courts to address local pollution issues. The trend caught on, and there are now more than 130 such courts throughout China. In July, the central government endorsed this effort by establishing an environmental tribunal within the Supreme People’s Court, the highest court in China. The new tribunal will handle cross-jurisdictional cases, and may prove to be a valuable tool in enforcing the recent EPL amendments. “[The courts were] a response born out of crisis,” Stern says. “It was a way for local officials to see that environmental protection was a rising policy priority and try to do something about it by setting up these local environmental courts. What happened was that the idea kind of spread… and it kind of trickled up.”

All these changes indicate that China’s central government is starting to take the environment seriously. And that is good news. But what is driving the transformation?

In a word: pollution. In recent years, air pollution in China’s large cities has reached unprecedented levels. Chinese citizens have had to contend with smog as they commute to work, as they shop, and as they contemplate the costs and benefits of keeping children inside, protected from the worst of the particulate matter. As a result, China has been thrust headfirst into the realm of environmental protection, if not for altruistic reasons, for practical ones.

“A lot of the impetus for this is stemming from the increasing severity of the air pollution, and the government and the public’s awareness of just how bad the air pollution has gotten,” explains Alvin Lin, China climate and energy policy director with the Natural Resources Defense Council, speaking via phone from Beijing. “Of course, there are many other problems — water pollution, soil pollution, and so on — in China, but I think the air pollution is really, in the last two years, what has been the lever for a lot of the changes that were in the works.”

Health concerns also dovetail with economic goals. “This is an issue that the Chinese government is taking increasingly seriously, and it is for real politic kinds of reasons,” Stern says. “It is because of the health impact of pollution on China’s own citizens, and because of the lost GDP that comes from lost productivity… There are all kinds of economic implications of china’s worsening pollutions problems, that are not desirable from anybody’s perspective.”

Pollution protests and concerns about social stability also seem to be playing a role. With increasing transparency surrounding air pollution — such real time PM2.5 monitors in many Chinese cities and daily air pollution rankings — the Chinese public has access to pollution information at its fingertips. With this access, the Chinese public has become more vocal on environmental issues. “That is a huge part of this equation,” Stern says. “Because of course, protests come with fears of social unrest.”

According to Lin, the changes to environmental law and government rhetoric also come at time when the central government is trying to redirect the Chinese economy towards more environmentally friendly industries. “In all these sort of [heavy industry] areas — iron, steel, cement, chemicals — you have excess capacity,” says Lin. “There is too much capacity for even China to absorb… So really, the most polluting ones are being forced to shut down by the central government. And that’s to address this excess capacity issue, but also to address the pollution issues.”

But for all the steps China is taking in the right direction, there remain serious questions about enforcement. Historically, environmental enforcement has been a struggle in China. According to Lin, enforcement teams are often under-staffed and under-trained, which makes effective monitoring a challenge. Additionally, local officials are often incentivized to support local economic growth, which can lead to misreporting and falsification of pollution records.

There is also hope that the recent attention being paid to environmental protection will spur action in the coal sector. Beijing, for example, just announced, that it will ban all coal use within its six major districts by 2020. And NRDC’s China program is currently working on a plan to peak national coal consumption in China by 2020, a lofty goal for the world’s biggest coal producer. “We are working with several government research institutes, universities, and industry associations on developing a national coal cap policy for China to try to see when China can peak its coal consumption,” Lin says. “We are really looking to see if we can peak coal consumption in China by 2020, and have this added to the existing environmental and energy and climate targets for China.”

Due to the severity of the environmental problems the country faces, and the likely drastic responses that might be required to tackle these problems, China may find itself a global example not only of environmental destruction, but also of environmental redemption. “I think the broader story is that China does face severe environmental challenges, and they have more pressure to make that transition to a cleaner development path,” Lin says.

In the end though, these initiatives within China’s central government are fueled not by an innate desire to be “green,” but more likely, by money. “Historically, China has been struggling with problems of development, and economic development has been the biggest priority at every level of the state,” underscores Stern. “So I think in this turn towards environmental protection, the goal is not necessarily to be the greenest country on earth, but what they talk about in China is finding a new balancing point between environmental protection and economic growth.”