Fisherfolk living along the Senegalese coast were supposed to inherit a rich and ancient livelihood. Using flat-bottomed, wooden dugout boats called pirogue, they were to head out to the seas armed with little more than a small net and the gift of knowledge and return with boats full of fish. The ocean’s bounty had been sustaining them for generations, but in the past few decades that has been changing — and it doesn’t take long to figure out what’s to blame. 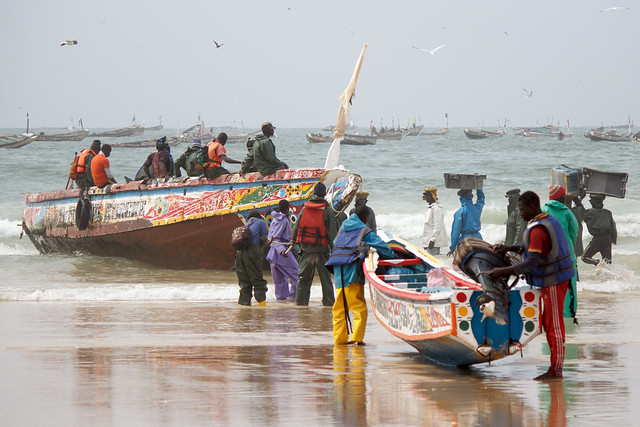 Photo by Toon van DijkDue to increasingly meager catches, many traditionalist fishermen in Senegal and other countries along Africa’s west coast seek out better employment in Europe or try to survive by adopting alternative livelihoods like hunting ocean bushmeat.

Where once the shores along Africa’s west coast were dotted with local fishermen’s’ small, flamboyantly-colored boats, they are now dominated by large industrial trawlers, pulling nets large enough to catch entire shoals of tuna. Every year the ships are getting bigger and bigger, now reaching capacity of over 4,000 tons of fish per trawler, whilst fish stocks for local fishermen dwindle with every passing day.

According to estimates by the Africa Progress Panel, West Africa has become a global hub of illegal fishing, losing an estimated $1.3 billion a year to the trade. Of this, around $300 million comes from illegal fishing in Senegalese waters, according to estimates by a USAID report produced in concert with the Sea Around Us. “Up to a quarter of jobs in the region are linked to fisheries, which is part of a vast intra-regional trading network in which women play a central role,” writes Caroline Kende Robb, former executive director of the high-profile think tank that advocates for sustainable development in Africa. “Apart from draining the region of revenue, overfishing reduces fish stocks, lowers local catches and harms the marine environment. It destroys communities, who lose opportunities to catch, process, and trade fish.”

Governments in West Africa, seeking an easy income, have been selling the rights to fish their waters to rich European governments, who have already decimated their own seas. While European trawlers remain the primary foreign presence in these waters, fleets from China, the Philippines, Russia, South Korea, and Taiwan have also expanded in recent years. Together, industrial fishing vessels from these countries outperform local artisanal fishers by at least 20:1, estimates OceanCare, a Switzerland-based marine conservation group.

What’s worse is that this legally-sanctioned activity also provides a cover for illegal, unreported and unregulated (IUU) fishing. “IUU fishing often accounts for a large proportion of the total catch,” OceanCare says in a recent report. “These ventures disguise the origin of their illegal catch so well that it is able to be sold into consumer markets – mainly in Japan, the EU, the US, and other developed countries – as legal catch.” The rape of the oceans has scientists predicting all major consumed fish stocks to collapse by 2050.

Due to increasingly meager catches, many traditionalist fisherman are faced with the impossible decision of leaving their home, and their families, to seek out better employment in Europe. Others try to survive by adopting alternative, and often unsustainable, options for nutrition and income. This includes hunting and consuming increasing numbers of marine animals such as dolphins, whales, manatees and sea turtles, or what’s now being called “ocean bushmeat” 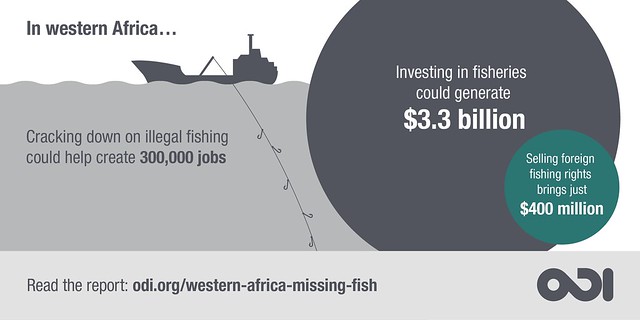 While terrestrial bushmeat is a relatively common concept, the hunt for marine megafauna has only been termed as ocean bushmeat recently. As with land-based wild meat, aquatic wild meat too, has been a way of life for some coastal communities for thousands of years. But it is the escalation in consumption that organizations like OceanCare are concerned about.

OceanCare says that the increase in the consumption of aquatic wild meat needs to be addressed urgently.

“In some places the limited harvest and consumption of aquatic species used to be sustainable, but modern pressures and the growing human population has changed the balance,” says Joanna Toole, ocean policy consultant at OceanCare, “In many areas of the world, particularly those that are reliant on traditional fishing, aquatic wild meat has been a supplemental source of food, and in some regions aquatic species are not only killed for food but also medicinal and ornamental purposes.”

For instance Toole says, some communities use dugong oil for preserving wooden boats. In the past, it is believed many of these animals were caught accidentally as bycatch, but Toole explains that the consumption and trade in these species has “developed into an increased number of directed hunts.” Available evidence shows aquatic wild meat to be a global problem, with animals being caught and utilized both accidentally and intentionally in many regions of the world. However, Toole points out that there are some notable hotspots.

In West and Central Africa alone, at least 20 countries are known to carry out specialized hunts for the West African Manatee, and Ghana is thought to represent a particular hotspot in the region for hunting at least 16 species of cetaceans, including Clymene dolphins, pantropical spotted dolphins, melon-headed whales, and common bottlenose dolphins. Many of these species are listed as endangered, or vulnerable. OceanCare “has grave concerns about the survival of aquatic species, including dolphins, whales, manatees, turtles, crocodiles and seabirds if current levels of exploitation continue,” Toole says.

According to the World Wildlife Fund, half of the global population of marine wildlife has been lost since 1970, and further damage could prove irreversible. And past studies have established that years of poor fish supply coincide with increased hunting in nature reserves and sharp declines in biomass of 41 wildlife species in western Africa. Local market data has provided evidence of a direct link between fish supply and subsequent bushmeat demand in villages. In 2014, researchers estimated terrestrial bushmeat consumption had grown to around 5 million tons for the Congo Basin alone. OceanCare estimates that aquatic bushmeat consumption is likely growing at a proportionate rate.

Whilst most environmental conservation projects can be challenging, addressing the issue of aquatic wild meat is particularly tricky. A key problem is the people who are targeting these animals are likely driven to do so as a result of other (usually, non-local) people’s choices that have caused their regular fish catches to dwindle day by day. With limited resources and often corrupt and ineffective governments, these fishing-dependent folk have little choice but to turn to any other available food sources.

The key point to see here is that we must be incredibly careful not to point fingers at the local people, Toole says. It is easy to call wolf on the final link in the chain, but we must recall that it was a domino effect that led them to this situation. It is not their small canoes, which have been used sustainably for fishing for thousands of years, which are causing the collapse of the oceanic food chain. It is the industrial trawlers that the developed nations are bringing in. It is the global demand for fish, sushi, shark-fin soup, and other seafood delicacies that has been driving fish populations to the ground.

So while local enforcement of bushmeat laws is important, reducing pressure on already impoverished people now turning in greater numbers to harvesting aquatic bushmeat is even more important. Toole, however, admits that “finding alternatives to aquatic wild meat consumption is challenging against a climate of depleting fish stocks and increased industrialization placing increased pressure on coastal communities and their traditional ways of life.”

OceanCare has thus been focusing its energies on working with the countries impacted by overfishing. In October it played an integral part in forming the Abidjan Aquatic Wildlife Partnership to address the issue of illegal trade of aquatic wildlife in West and Central Africa. “[We] fundamentally believe it is critical to involve and engage local and coastal communities in the management of aquatic species, especially those communities which are traditionally dependent on them,” Toole says.

What we as a community need to do, is to remain open-minded, supportive, and aware. Aquatic wild meat is yet to come to the attention of most of the general public, and this is something that needs to be changed. The oceans are already facing pressures on all sides, with overfishing teetering the delicate food web, ocean acidification rapidly changing the environmental conditions, and oil and chemical spills changing the composition of seawater. Adding another demand onto our oceans’ already strained resources might just be the final straw.

Though the issue is starting to be addressed by governments, we can play a part as well. As consumers, we play an important role in shaping ocean health, so let’s start by making sure we only purchase ocean-friendly seafood. There are several guides out there that can help us identify if the seafood we are buying comes from sustainable sources ( see here and here). Check them out and play your part in making sure we all have our equal share of Mother Earth’s finite resources that we do.

An earlier version of this story misattributed the source for the estimated dollar value of illegal fishing in Senegalese waters.