It’s an image from another world — a swirling compilation of thousands of mystical underwater creatures swimming together in a superorganism of controlled chaos. The scene is something out of a science fiction novel, utterly complex but simply beautiful. As I float on the ocean’s surface, the circular movements below me filter down out of sight, into the depths of the ocean. For a moment, I’m lost in a sense of awe and amazement. It’s followed by a sense of urgency. These creatures congregating in the depths of the Gulf of California are Munk’s devil rays (Mobula munkiana), and there is a local movement that pleads for their conservation.

From April to July, Munk’s devil rays amass off the coast of Baja California Sur. Photo by Keegan Sentner.

These rays are a common sight throughout the spring and early summer in the waters of the Gulf of California. From April to July, Munk’s devil rays make their annual migration into the gulf amassing off the coast of Baja California Sur from Loreto to Cabo San Lucas. This migration inspires rays to assemble in these massive congregations, in numbers thousands strong, swimming in an ever-moving circle of pandemonium. The reasons behind these gatherings are still unknown, although hypotheses range from predator avoidance to rituals of courtship or reproduction.

As I bob up and down amidst the choppy waters of the Gulf of California, I am accompanied on my flank by a renowned local ray biologist, Marta D. Palacios. In 2018, Palacios, a Spanish marine biologist and PhD candidate at the Centro Interdisciplinario de Ciencias Marinas in La Paz, Mexico, was the first person to identify the nursing ground for Munk’s devil rays in the Gulf of California. As we float in vacuum-sealed wetsuits, Palacios holds a long metal rod capped by two remote cameras on both sides. This contraption is a means of measuring each of the rays with geometry and remote sensing technology.

Much of Palacios’ work focuses on the genus of rays known as mobula rays, which includes a number of species in the Gulf of California, including Munk’s devil rays and oceanic manta rays. Specifically, she is concerned with their conservation, particularly in the face of the threat of bycatch by local fisheries.

According to a 2016 study published in Aquatic Conservation, an estimated 13,000 mobula rays around the world are bycaught annually by tuna fisheries using purse-seines. In the Eastern Pacific, one in every six nets placed in the water will catch rays.

In the Gulf of California, this mortality often occurs within local tuna fisheries, which are poorly regulated and often do not report bycatch data to the Mexican government. Palacios’ work focuses on minimizing the impact of these fishing practices, advocating for ray-safe gear and alternative fishing methods that reduce the bycatch of ray species. She aims to collaborate with the fishing community, turning fishers into mobula ray conservationists and promoting alternative livelihoods to support these communities.

And she’s not alone in her pursuit. In 2020, Palacios co-founded Mobula Conservation, based in La Paz, alongside Melissa Cronin and Nerea Lezema-Ochoa. Cronin, a former environmental journalist and UC Santa Cruz PhD candidate, is focused on developing sustainable fishing methods to limit bycatch in tuna fisheries. Lezema-Ochoa, a Spanish quantitative marine biologist, works with a team to map the movements of vulnerable species within the California current system. All three founding members were already well-known in the local community for their efforts researching ray bycatch with other organizations, and they thought that an all-female-led conservation group could make an impact on ray conservation in the Gulf of California. The project was born from “the necessity of women power” in conservation research, says Palacios.

That women power is making significant strides. Palacios feels that her team members are more inclined to “ask more questions” and strive to create a deeper connection with the community than male biologists. Compared to their experiences in past research, this project has provided the women with a healthier and more productive work environment. In a recent article about Mobula Conservation, Jay Clue, founder of Dive Ninja Expeditions, a world famous dive center in Cabo San Lucas, wrote, “Female scientists working in what is a traditionally male-dominated fisheries field brings its own set of challenges, but it also breathes new life into what is possible.”

Since its inception, the conservation project has been quite successful. The Mobula Conservation team works with local fishers, photographers, biologists, and eco-tourism organizations from Baja California Sur to provide research excursions and tours to educate individuals on mobula rays.

Our captain for our expedition is one of these fishers-turned-conservationist. Guillermo Lucero Leon, a soft-spoken young individual from La Ventana, explains that he has worked as a fisherman since he was 15 and only recently transitioned into eco-tourism. In addition to by-catching rays, Lucero Leon and other fishers from his community once actively hunted them. Mobula rays have been historically hunted for their meat, skins, and fins, until it was outlawed in 2004 through a standard issued by the Mexican government. Lucero Leon tells us that the transition into ecotourism and sustainable fishing practices and away from the hunting of mobula rays has “allowed the fishers in the area to have a healthier livelihood and to experience more encounters with mobulas.” 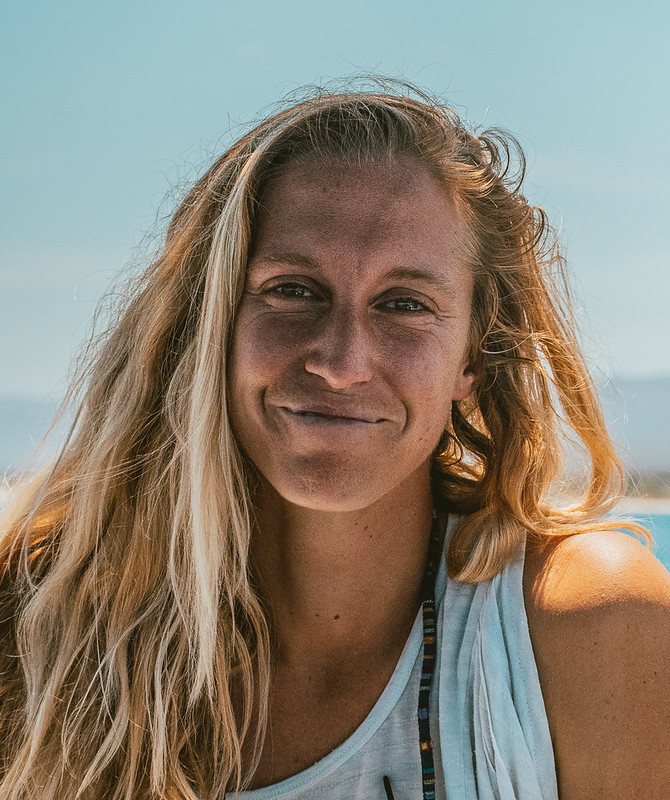 Biologist Marta Palacios was the first person to identify the nursing ground for Munk’s devil rays in the Gulf of California. Photos by Keegan Sentner. 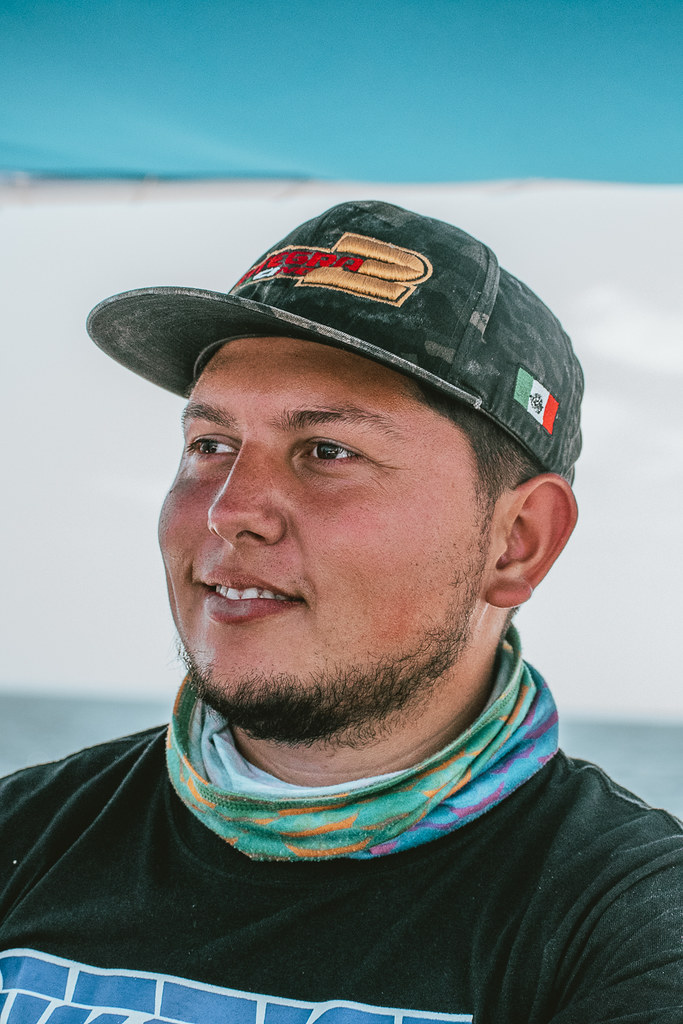 Guillermo Lucero Leon has worked as a fisherman since he was 15 but recently transitioned into eco-tourism.

By the afternoon, the sun is stronger than at any other point in the day. The exposed bow of the boat feels like a frying pan resting on the open ocean water. The whole crew is waiting in silence. Just a few minutes ago, in the distance, we noticed a congregation of rays jumping out of the water like the culmination of the Bellagio’s fountain exhibit. Lucero Leon hit the gas, and we made a quick sprint across the water, positioning the boat just before the point we had last seen them.

Then it starts. Hundreds of rays jump out of the water in quick successions, like a well-coordinated water aerobics routine. Some of these rays seem to reach heights ten feet above the water, performing perfectly executed flips like Olympic gymnasts. The thunderous sound of the rays slapping their bodies against the deep blue waters of the Pacific drowns out all other noise. Then, without warning, silence overtakes the boat.

I ask Palacios why the rays behave like this. Why would a marine-dwelling creature launch itself out of the confines of its blue home only to come crashing back down again? She explains there are several theories, ranging from parasite removal to mating rituals. Her idea is that the rays use these dances as a form of communication between fevers, the word to describe a group of rays. They all jump out of the water to signal their presence to other rays in the area, as part of a well-coordinated plan to navigate as a collective species through the dangerous waters of the Gulf of California.

Whatever the reason, the deafening display is one of the most remarkable natural phenomena I have ever witnessed. Maybe it is a message, not to other rays, but to those of us who lie here in the sweltering heat, on the deck of this boat, a gesture of good faith among members of the same natural world.

Keegan Sentner is a journalist, photographer, and conservation communications specialist. He aims to pair the art of storytelling with the world of conservation, climate, adventure, and culture. Keegan graduated with a degree in Fish, Conservation, and Wildlife Biology from Colorado State University. He has since worked in wildlife conservation, ecological research, and communications. Keegan recently partnered with the Blue Turtle Sustainable organization, living and working in Baja California Sur as a communications intern. He now resides in San Francisco, focusing on a career communicating the planet’s pressing environmental issues in unique and inspiring ways.