Fed up with threats to lives and lands, Indigenous protesters are blockading roads and joining urban strikers across the country.
Ocean Malandra

Orlando Pito has been participating in a blockade on a highway in Southern Colombia’s Putamayo department for over three weeks now. “We are blocking the exportation of petroleum from the Amazon and the equipment needed to set up platforms for oil drilling, mining, and other forms of extractive exploitation,” says Pito, a leader of the Nasa community, one of a dozen or so Indigenous communities that have come together to construct the blockade in support of the largest protest the country has seen in decades. Colorfully tasseled baton in hand — the baton signifies his membership in the non-violent peacekeeping force known as the Indigenous Guard — he tells me they are prepared to stay until the “sun itself goes out in the sky” if need be.

An Indigenous protester blocks the road between the towns of Puerto Asis and Villagarzon in Southern Colombia as part of the massive ongoing protest taking place in the country. Photo by Ocean Malandra.

Since the protests began about a month ago, Guard members have set up resistance points across the country, including 17 in the Putamayo department alone. The Indigenous Guard are also at the forefront of the ongoing national paro (strike) in Colombia’s urban areas, where millions of Colombians have taken to the streets to express their outrage over a series of planned austerity measures proposed by the government, at times toppling statues of conquistadors.

Cuts to healthcare and education, a tax increase on basic goods, and a series of broken promises, particularly surrounding the current administration’s attempts to undo the 2016 Colombian Peace accord, have united the protesters, primarily led by youth, with other disenfranchized parts of society including Afro-Colombians, campesinos (farmers), and the country’s nearly 2 million Indigenous peoples, who live in 770 different collectively-owned resguardos (reservations). (While indigenous people make up less than 4 percent of Colombia’s population, they control over 30 percent of its land area.)

While the Indigenous protesters broadly support the main demands being made by the Colombian multitudes, including accessible healthcare and education, an end to governmental corruption, and a universal basic income, they also have their own specific points of contention.

For the Nasa people — who with over 200,000 individuals are one of the largest Indigenous groups in the country — the Colombian government’s decision to resume the aerial spraying of their territories with the herbicide glyphosate, labeled a “probable carcinogen” by the World Health Organization, is one of their lighting rod grievances.

Coca is a sacred plant to the Nasa people and dozens of other Andean societies across the continent, used both medically and ritually for thousands of years. The 2016 Colombian Peace Accord included promises that forced coca eradication efforts, including aerial fumigation, would stop in Indigenous territories. But the current president of Colombia, Ivan Duque, under pressure from the United States to stem the international drug trade, is bringing back the practice despite the fact that it has been denounced by human rights groups as the least effective and most environmentally damaging way to eradicate coca leaf.

While the Nasa have the legal right to grow coca for traditional use, fumigation by the government often does not distinguish between traditional and illicit cultivations, according to Pito. The government wants to weaken local Indigenous economies so that they will open their territories up to extractive industries like mining, petroleum, and electric energy generation, he says.

“While these projects make a lot of money for the state, they damage our territories and leave us in a deeper state of poverty in the long run,” Pito says. 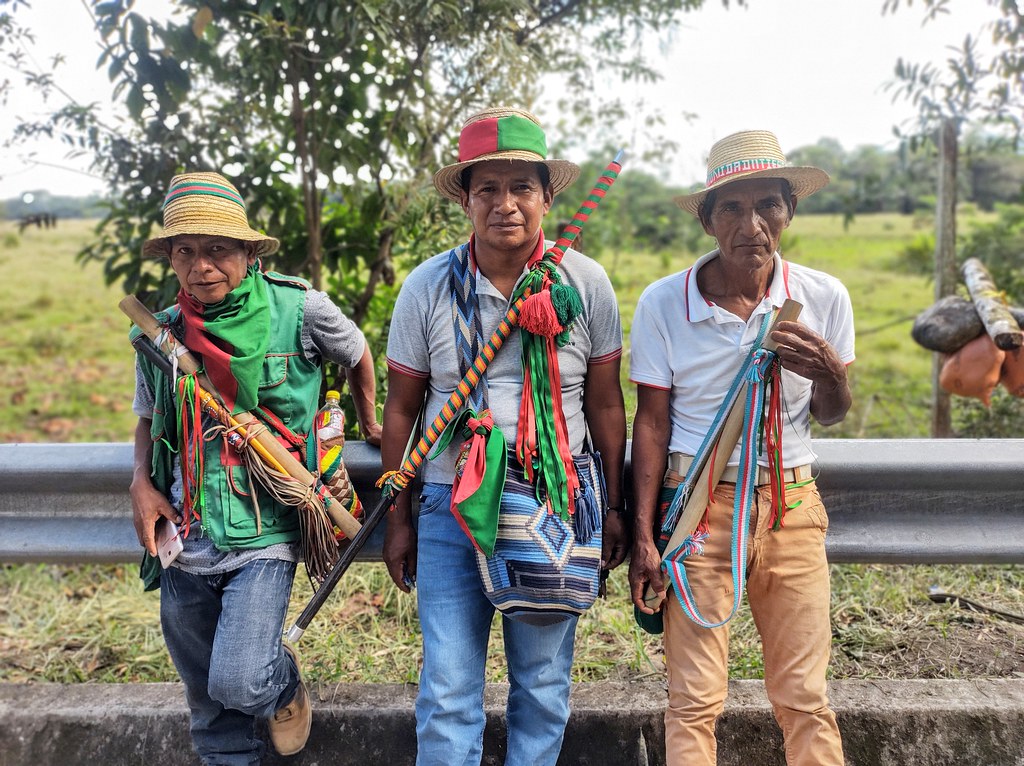 Orlando Pito, center, with other members of the Indigenous Guard, a non-violent peacekeeping force. Photo by Ocean Malandra. 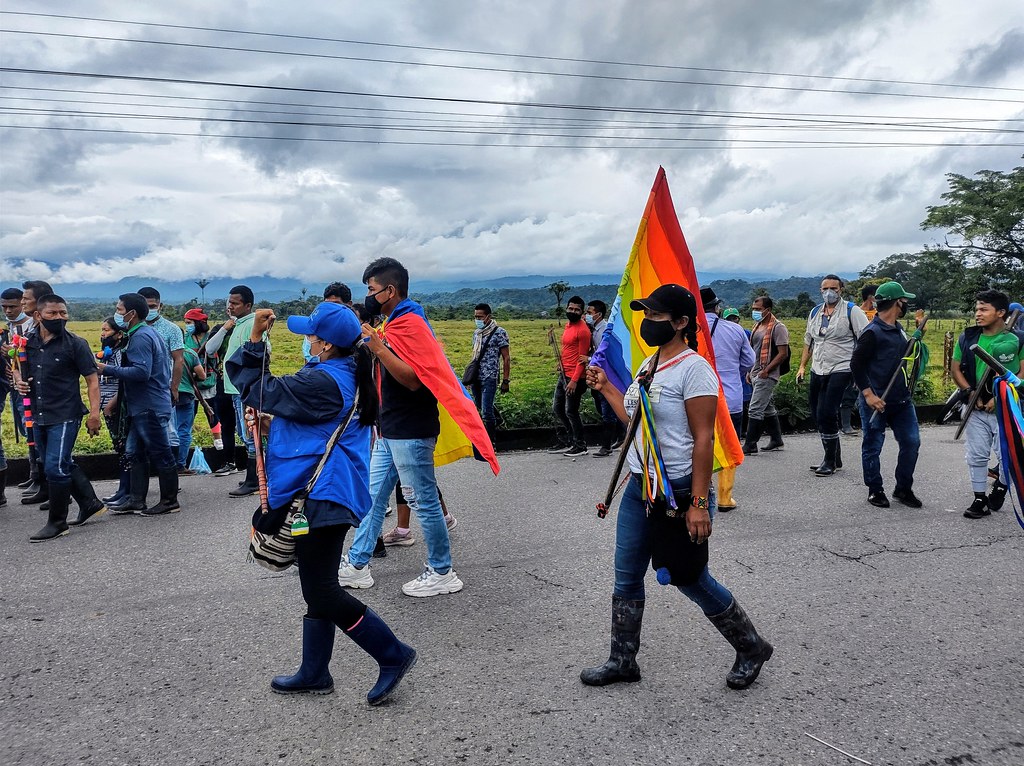 Women with the Andean flag march on the road to Villagarzon in Southern Colombia. Photo by Ocean Malandra.

“We don’t want mining in our territories, we don’t want multi-national corporations in our territories and we need previa consulta (prior consultation) to be respected, it’s a fundamental right that is constantly being abused,” adds Fernando Piaguaje, a member of the Siona nation in his late 20s who I meet at the Mesa Amazonica, a roundtable discussion between the government and Indigenous organizations held in late May in Mocoa, the capital of the Putumayo department, in response to the roadblock.

Previa Consulta is a right guaranteed by the Colombain Constitution that requires the government to notify Indigenous communities about projects or activities that they plan on carrying out in their territories before they are implemented. According to the Indigenous leaders in the Mesa, this constitutionally guaranteed right is simply being ignored and their territories are under attack by extractive industries, a major reason for them setting up the roadblocks and taking part in the national protests.

“We are facing threats to our Amazonian territory, the cultural survival of the Siona Pueblo, from all sides,” says Piaguaje.

Numbering just over 400 members, the Siona homeland lies along the Putumayo River and includes territories on both the Colombian and Ecuadorian sides of this major tributary to the Amazon. For decades, the Colombian government has been granting concessions to international oil companies on or adjacent to Siona territories without their consent, even allowing the oil companies to dump into the rivers they depend upon for survival, causing widespread health problems in the already struggling community, which the Colombian constitutional court has classified as at “risk of cultural and physical extermination.”

Piaguaje, who is the coordinator of territorial land for the Indigenous Organization of the Putumayo Zone (OZIP), an Indigneous-run autonomous body with members from 14 different Indigenous ethinicities in the Putumayo region, tells me that keeping their territory intact is the number one thing that will keep the Siona from disappearing. He also says that the spiritual beliefs of Indigenous people, which emphasize a state of unity with their territories and with each other, is the “strongest factor behind their resistance.”

OZIP itself represents a form of organized resistance from the Indigenous community in response to threats to lands and lives. It was founded in 1986 by several indigenous leaders from the Putumayo region including Pablo Evanjuanoy Chindoy, a Taita (spiritual authority) of the Inga people, who occupy traditional territories of breath-taking beauty where the Andes and Amazon come together in the Alto Putumayo. I catch up with him at a roadblock adjacent to his resguardo (reservation) just north of Mocoa where he is busy keeping the protestors in high spirits by playing his guitar while alternating the accompaniment between singing, harmonica, and quena (Andean flute).

“We Inga are part of the Amazon rainforest where there is life, where there is medicine, where there is everything the human being needs” he tells me. “Keep in mind that for thousands of years, these were the ancestral territories of the Indigenous people. All of Colombia. We have been robbed by this system of imperialism, by this neoliberalism, by this world of globalization that wants to appropriate the entire planet.”

Like the Siona, the Inga are classified as at “risk of cultural and physical extermination” by the Colombian constitutional court. They have also been the target of massacres and assassinations, caught in the crossfire of different armed factions in the area including narco-traffickers, revolutionary groups, paramilitary forces, and the government’s own military. Nearly 100 Indigenous leaders have been murdered in Colombia since 2016 when the Peace Accord was signed, another major reason Indigenous communities are taking part in the national uprising.

Now, they face the threat of violence for their participation in the protests. As protests in major cities like Bogota and Cali have grown, so have violent crackdowns from the government. So far, at least 59 people have been killed and 2,300 injured in the protests. Even as international organizations like the UN call for a stop to the violence, the Colombian government is authorizing military actions against urban protestors as well as the forceful dismantling of Indigenous run roadblocks across the country. That includes the blockades in the Putumayo where the state riot police have already arrived to face off with the protestors. In Cali, Colombia’s third largest city, Indigenous protestors who caravanned in from the country side faced gunfire from counter protesters, leading to denouncements from international human rights groups.

But Chindoy says the protesters will not back down. “We here not to ask, but to demand that the state fulfills the many norms and decrees that have been passed but have never been fulfilled.”

Chindoy points out that the battle against the privatization of resources and recognition of Indigenous rights has been a long one, going back at least 500 years. And this protest is likely to continue for some time. But he also says that the massive protests rocking the nation are a sign that Colombia’s next generation is realizing that the system does not work for them either, and this gives him hope.

“The whole world is waking up to the possibility of achieving a new way forward, a new system of living in harmony with the planet that respects mother earth and the Amazon rainforest,” he says. “For this reason, more than anything else, we are joining the protests and giving them our full support. We will not stop until this system is changed.”