Sikkim, the picturesque northeastern Indian state in the eastern Himalayas, announced in January that it had transitioned completely to organic agriculture — the first state in the South Asian nation to do so. 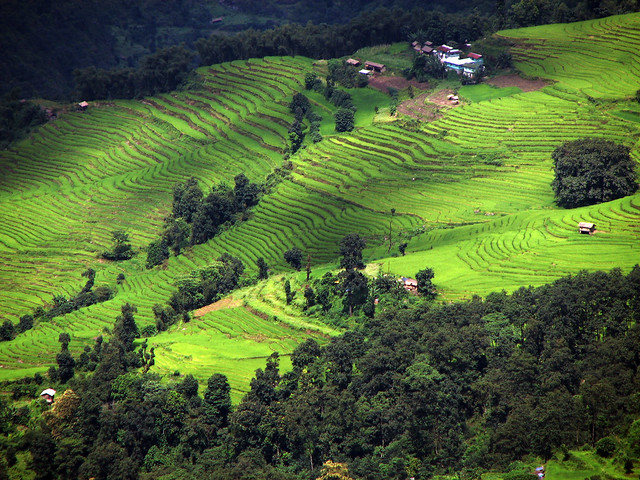 photo by Amol HatwarSikkim’s shift to organic agriculture was helped by the fact that it has far less cultivable land compared to other agricultural states in India.

The process of shifting to organic agriculture was initiated by the state government 13 years ago when it launched the Sikkim Organic Mission. Sikkim had a leg up in this regard, given that farmers in this difficult terrain were already pursuing traditional farming with minimal use of chemical fertilizers and the fact that the state has far less cultivable land — about 76,000 acres — compared to other agricultural states in India. Taking the required measures to get certified as organic farmers was a logical step for Sikkim’s farmers, state officials say.

“It was a matter of patience, but thankfully we ultimately achieved the status of 100 per cent organic farming with the completion of organic certification of all agricultural land in Sikkim,” says Dr. S. Anbalagan, the executive director of Sikkim Organic Mission.

Indian Prime Minister Narendra Modi welcomed the news saying: “If the experiment succeeds, farmers in other places will follow it on their own. Farmers may not be influenced by any amount of lectures by scientists; for them, seeing is believing.”

But does this euphoria match the ground reality in Sikkim? Many agricultural experts say that a lot more needs to be done before agriculutral practices in this mountain state can be held up as a role model for the rest of India where rampant use of pesticides and fertilizers has become a serious issue. While Sikkim deserves to be commended for deciding to go organic, the effort hasn’t paid much attention to production side of things, says G. V. Ramanjaneyulu, agricultural scientist with the Hyderabad-based Centre for Sustainable Agriculture,

Sikkim, he points out, has long been a food-deficient state. Existing food production there meets only 30 percent of the local population’s dietary needs. The rest has to be imported from neighboring states.

Rajeswari Sarala Raina, senior scientist at the National Institute of Science, Technology and Development Studies agrees. In making plans for organic agriculture, the leaders in Sikkim seem to have avoided discussions on two major issues — food self-sufficiency and nutritious food for all Sikkimese, she says.

“For a state to shift to organic production it is not enough to do certification, support on-farm input generation, and training programs,” Raina says. “The state has to begin with a policy goal of food sovereignty and minimizing nutritional inequality; and then build the organic agriculture mission to cater to these overarching policy goals.”

Ramanjaneyulu says he is “intriuged” by the fact that the farmers do not seem to be at the center-stage of Sikkim’s organic mission. “It simply sounds like the government’s program. We have seen what happened in the state of Uttrakhand,” he says, refering to another Himalayan state to the northwest of Sikkim, where too, it was the government that set a five-year target on organic farming — a top down agenda that didn’t consider the farmers’ perspective and eventually failed to meet its time target.

He was critical of the heavy expenditure involved in the certification process for farmers when it was not known whether it is benefiting the farmers. “It is the certification agencies and the organic-wholesalers who are getting benefited [from the transition to organic] and nobody knows about the price realization for farmers,” he says.

Ramanjaneyulu also pointed out that Sikkim’s organic mission does not talk about the integration of non-timber forest produce of the highly forested Sikkim state with its organic production goals. “For example, rather than shifting or importing resources from other states, Sikkim can easily use its locally available biomass for compost,” he says.

Transporting the produce to the markets is another major challenge.

Vegetables and fruits, which generally have very short shelf lives, make up a large part of the produce in Sikkim. But the mountainous state is poorly connected to the rest of India. It doesn’t have an airport or railway line and the roads linking the state to the nearest trade hub — Siliguri in neighboring West Bengal — are poorly maintianed and prone to landslides. Roads and highways within the state too, often get washed out during the rainy season rendering many remote areas inaccessible for days.

“It is very difficult to deal in fresh produce, especially when we are landlocked and have no rail or airport connectivity,” says Renzino Lepcha, chief operating officer of Mevedir, an agriculture company that provides services to Sikkim farmers through Sikkim Organic Mission. “The risk factor [for farmers] is quite high as there are no proper [storage] facilities. There is no cold [store] chain, no refrigerated vans, no processing unit, no food park, no packaging material (everything comes from outside the state),” he says.

All these factors make transportation of produce very expensive and many small scale farms have a hard time covering their costs and finding a fair price for their produce.

Lepcha also said that Sikkim’s organic mission is facing are other challenges like dealing with pests and diseases in certain key cash crops like ginger and cardamom, ensuring the timely supply of organic pesticides and bio fertilizers and irrigation problems in some areas.

Anbalagan, the director of Sikkim Organic Mission, claims that efforts are on to address most of the issues regarding infrastructure. Sikkim was working to establish food processing-plants for value addition, creating cold-storage facilities everywhere in the state and getting the region connected to rest of India for speedy transportation of produce to markets, he says. He, however, observes that these “technical” challenges will take some years to get fully addressed.

“As I said, we need to fix many issues on the technical side. But in other respects, we are making a good progress,” he says.

Clearly, this tiny state has to put in a lot more effort to address these challenges for ogranic agriculture to become sustainable and profitable for its farmers over the long term. But despite these challenges, Sikkim’s intiative is already serving as an inspiration for other Indian states.

So far, at least three other states — Kerala, Mizoram, and Arunachal Pradesh — have begun working towards transitioning to organic agriculture. In a nation that’s still suffering the after effects of the chemical input heavy Green Revolation, this can only be welcome news.