The Mediterranean region is particularly susceptible to global warming. It is both dry and coastal, exposing it to two big climate shifts: aridification and sea-level rise. The UN Environmental Programme lists the Mediterranean as a “climate hotspot” that is warming 20 percent faster than the global average, with sea levels expected to rise up to 2.5 metres by 2100. Predictions are even more dire in the Eastern Mediterranean, which includes Israel and Palestine, where climate models predict up to 30 percent loss in precipitation by the end of the century. Here, the need to address climate change is urgent, but it has been undercut by the ongoing encroachment and expansion of the Israeli state. These efforts have made Palestinian communities less resilient to the changes that are coming. 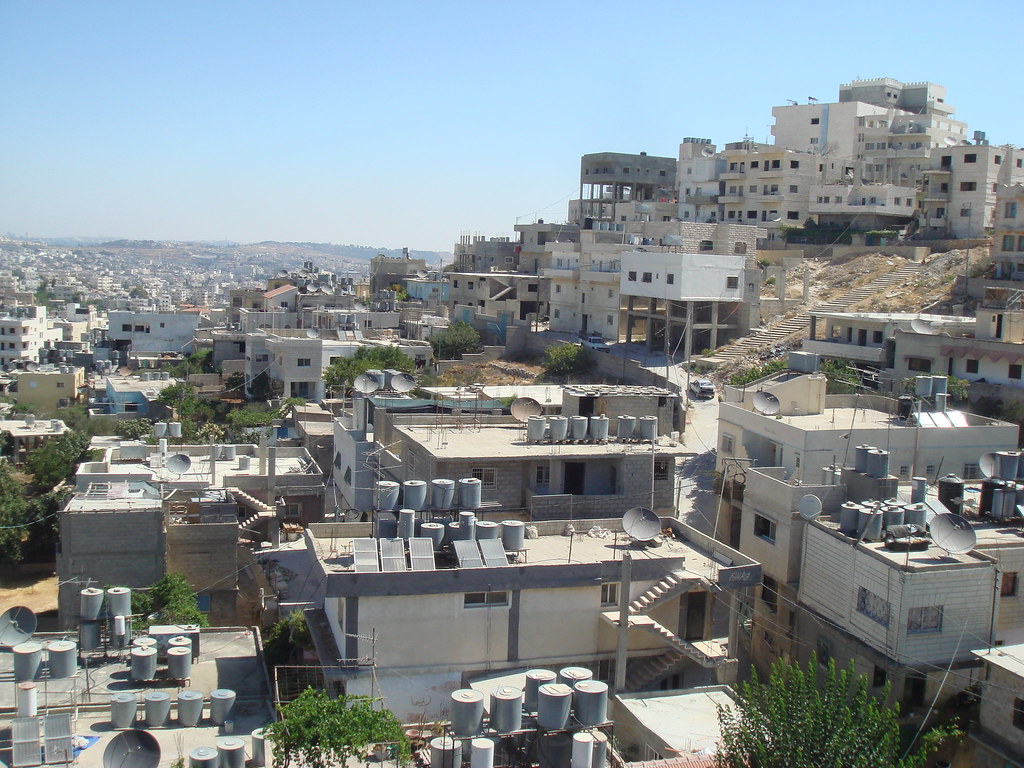 ​Water storage tanks on rooftops in Palestine. Palestinians cannot extract groundwater without the consent of the Israeli authorities, impeding the ability to improve agricultural irrigation, adapt to aridification, or bolster flood defences. Photo by Xavier Damman.

“Israeli actions and their occupation exacerbate the climate risks facing Palestinians by denying them the right to manage their land and resources, making them more vulnerable to climate related events,” says Abeer Butmeh, an environmental activist from Palestine and coordinator of the Palestinian Environmental NGO network.

Israel’s 14-year blockade of Gaza, which gives Israel full control of what enters and leaves the area, has been a major obstacle in this regard. As Asmaa Abu Meziad of Oxfam, a global organization that fights inequality to end poverty and injustice, argues: “It has affected Gaza’s adaptive capabilities…meaning that they have already been exhausted financially, socially, and economically.” The blockade means that Palestinians are simply not receiving the materials they need to improve their own situation and adapt to their changing environment.

Palestine’s location means that it is already susceptible to aridification, and the building of the controversial Gaza Wall, which led to the uprooting of thousands of trees, has meant that Palestine is increasingly suffering from erosion and aridification, with the soil’s ability to retain water severely compromised. Likewise, the diversion of the Jordan River away from Palestinian territory has left many traditional Palestinian farmlands deprived both of water and the nutrients that are necessary for the cultivation of crops. The Israeli mismanagement of the water flowing from the Jordan Basin has, as Rav Avraham, an expert working for Eco Peace on the river’s ecosystem and influence says, “already had [a] devastating and unpredictable impact.”

This is particularly true in Gaza where the 1995 Oslo II accord gave Palestine only a 40 percent share in the West Bank. (Israel holds the majority share.) These agreements also created a joint Israeli-Palestinian committee to manage the water and sewage in the area. In practice this has meant that Palestinians cannot extract groundwater without the consent of the Israeli authorities, impeding the ability to improve agricultural irrigation, adapt to aridification, or bolster flood defences. All of this compromises the Palestinians’ environmental adaptability.

Israel argues that it is addressing these environmental issues. For example, it has allowed large quantities of raw sewage and wastewater to flow onto Palestinian agricultural lands, arguing that it has nutrients despite evidence to the contrary, and has drilled wells to address access groundwater. But as Zena Agha, an expert on the Middle East and US Policy Fellow for Al-Shabaka, a transnational Palestinian think tank, argues: “This has come at the cost of reduced long-term sustainability and at extreme risk to public health.”

Israel’s energy minister, Karine Elharrar, has said that he is interested in working on a deal that would create trading relationships around renewable energy and water infrastructure between Israel, Palestine, and Jordan. But these and similar efforts have met strong resistance from Israel’s political right.

The lack of any definite progress has meant that environmental concerns are increasingly leading to outbreaks of violence. Disputes in the al-Naqab, or Negev, desert, in southern Israel, offer an example.

This year, hundreds of activists have protested the Jewish National Fund’s plan to plant thousands of trees on 5,000 square miles of Bedouin land. The project will not only displace the Indigenous populace, but it will destroy fruit trees already in place, in favor of non-native trees. Israeli officials say the plan was aimed at environmental regeneration, and in January Israeli bulldozers razed at least five villages and destroyed 494 acres of farmland in the process. This has led to widespread flooding, as well-established irrigation systems have been destroyed. Meanwhile, the replacement of native trees with European pines damaged the soil by loosening it. In other areas of more established European pines, their presence has also seen a reduction in biodiversity and increased soil erosion.

Numerous arrests, during protests in the Negev region, have since erupted into localized violence. Local Bedouin and their supporters argue that climate-related hazards, such as forest fires and flooding, have manifested as a result of Israeli policy. The tree-planting, they argue, is the latest in a long line of politically-driven climate initiatives that are devastating local biodiversity and accelerating global warming. “Humans and nature have been intertwined in Palestine for thousands of years, and the continuing loss of biodiversity is irrevocably damaging Palestinians’ cultural and natural heritage, threatens endangered species and harms environmental sustainability,” says Mazin Qumsiyeh, a researcher at Bethlehem and Birzeit universities.

The Society for the Protection of Nature in Israel, an Israel-based environmental nonprofit, has taken the Jewish National Fund’s project to Israel’s High Court, where it argued that the enforced forestation would hurt local biodiversity. Another international group, Canadians for Justice and Peace in the Middle East (CJPME), notes that such projects can be understood as “greenwashing,” which in this case includes baseless portrayals of Palestine as a desolate wasteland in need of Israel’s influence. (Bedouin Palestinians have lived in and farmed this part of the world for centuries.) “The Jewish National Fund is an organization which enables Israel’s ongoing colonization of Palestine and helps greenwash Israeli crimes,” CJPME says. “To date, 86 destroyed Palestinian villages are buried under JNF forests.”

For its part, the Jewish National Fund claims that their actions are characterized by “education, forestation and environmental protection.” But the Negev has long been a focus for this greenwashing. Since 2011, for example, solar farms have been placed in the area by the Israeli government to produce clean energy that is then sold to the Israeli Electric Corporation, a state-owned company. These profits fund projects such as the tree planting. But critics say they also depopulate Palestinian villages. Similar practices were used during Israeli expansion in 1947 and 1948, when at least 750,000 Palestinians were forcibly removed from their lands, ostensibly for environmental reasons. This led to what Hussein Ibish, a resident scholar at the Arab Gulf States Institute, calls “the ethnic cleansing of the lands that were once Palestine.”

The London School of Economics and Political Science notes that tree planting as a whole is beneficial in “tackling rising CO2 levels,” but the loss of native flora and fauna, as well as the use of aggressive land clearance, decreases climate resilience. Meanwhile, the loss of Palestinian villages in the Negev has also meant the loss of local environmental knowledge, something that the LSE regards as an accelerant for climate change. A legal report submitted in 2021 to the High Commission for Human Rights echoes this point and seeks to enshrine this conclusion in law. As Yara Hawari and Palestinian Policy Fellow at Al Shabkaa argues: “Palestinian Bedouins have long been successfully cultivating the lands of the Naqab, (and) years of developed knowledge has meant that when issues such as flooding have arisen, or drought, they have been able to deal with it.” Now, though, when they are denied a presence on the ground, their ability to adapt to issues such as aridification has diminished.

Water access in the increasingly arid region is becoming a major issue, one that is inseparable from the fraught political situation. The need for water for an expanding Israeli population has led to excessive groundwater extraction from the aquifer beneath Gaza, where more than 2 million people live on a 141-square-mile strip of land. This has meant water shortages in Gaza, which is also facing wastewater contamination and sea-level rise. This means that water in Gaza’s aquifer has become unfit for drinking. Palestinians living here have no other freshwater source.

Drinking water is also a challenge in the West Bank, where Amnesty International calls the difference between water access for Israeli and Palestinian populations “truly staggering.” Palestinians rely heavily on aquifers for their water supply. But as Zena Agha of Al-habaka notes, these “have been subject to over-extraction and pollution in recent years…in addition to rising sea levels and the intrusion of seawater (in Gaza).” This increased pollution is largely as a result of Israeli industrial activity and the use of fertilizers on lands cleared for agriculture. Developing access to water is also extremely difficult with Israel “preventing any attempt to build or maintain water infrastructures such as reservoirs within Palestinian lands.”

Efforts to address the water crisis are met with blockades and bureaucratic obstacles, “eliminating Gaza’s ability to meet the basic needs of its population,” says Natasha Westheimer, who specializes in water management at the international social justice organization Kamara. For example, last year Israel refused to grant Palestinians licences to access water supplies on Israeli land.

At the other extreme, Gaza faces the ongoing threat of flooding. In January, Gaza was ravaged by floods, after several days of heavy rain. And while many countries are dealing with flooding and weather extremes this year, as a region fraught with conflict, Gaza suffers from a further disadvantage. Leaders in Gaza say an Israeli assault on the city the previous May damaged its infrastructure, exacerbating the impact of the floods. “[The Palestinians’] adaptive capability has already been exhausted financially, socially, and economically over the past decade because of the (Israeli) blockade,” says Asmaa Abu Mezied, an Oxfam economic development specialist, “leaving them much more vulnerable to floods.”

This all adds up to increased instability for Palestinians, in a world where the climate crisis is adding more and more uncertainty. Whether its drought, flood, or deforestation, as the impacts of global warming become more acute, so too does the need to address these inequalities between Israel and Palestine.

Rebecca Batley is a journalist and historian who has lived and worked extensively in the Middle East.