In 2012, an energy company offered Deb Evans and Ron Schaaf $2,000 for an easement across their property in Klamath County, Oregon. The easement was for a portion of the Pacific Connector pipeline, which was to carry natural gas from the Western Rockies across Southwest Oregon to a new export terminal in Coos Bay, Oregon, called Jordan Cove. The terminal would include facilities for super cooling the natural gas into liquefied natural gas, or LNG. 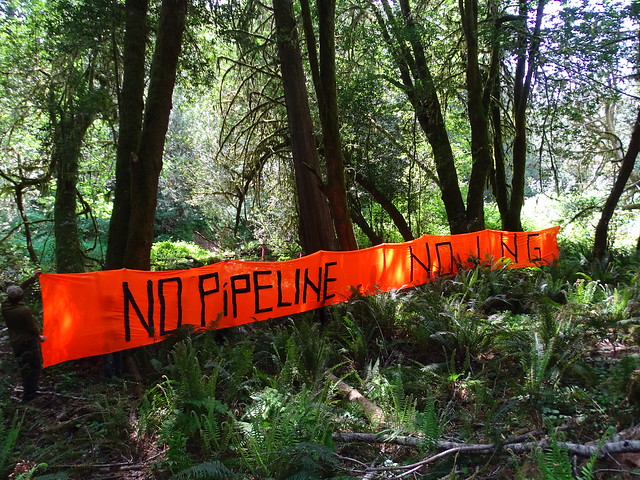 Evans and Shaaf refused. As they learned more about the pipeline, their alarm grew. If the Federal Energy Regulatory Commission (FERC) approved the project, Pacific Connector could use eminent domain to acquire a 95-foot construction easement and a permanent 50-foot right-of-way easement, despite their refusal to sell the rights to their land.

Approval seemed likely. The pipeline and terminal project was one of a flurry of projects proposed by various energy companies to capitalize on the Oil Sands and fracking booms; so far, none of the applications had been denied.

In December 2014, the couple attended a public meeting, where they met dozens of concerned citizens. “We had missed the big picture of why people were against the project,” says Evans. This bigger picture included not only devalued property values and the threat of eminent domain, but increased erosion, habitat fragmentation, degraded water quality and compromised salmon habitat, and the threat of catastrophic wildfire should an explosion occur somewhere along the mostly forested 232-mile pipeline route.

Then there was the Jordan Cove export terminal. The proposed site for the terminal was a sandy spit located in a tsunami inundation zone in southern Oregon, near the towns of Coos Bay and North Bend. Its construction and operation, which would require extensive dredging, would impact fisheries, including commercial clam and oyster operations. The facility would become a large source of greenhouse gas emissions, and it would require a 420-megawatt power station to liquefy the natural gas in preparation for export across the Pacific to Asia. Should an earthquake or tsunami damage the facility, volatile leaked LNG could pose a safety hazard for the surrounding communities.

Evans and Schaaf dug in. They formed Hair on Fire Oregon and helped organize a broad coalition of private landowners, joining tribes, ranchers, fisheries managers and environmental groups who were fighting the pipeline and terminal projects. They educated landowners about how the projects would impact land values, local industry, and the environment. They hired lawyers and filed letters at every step of the labyrinthine FERC process. In Coos Bay, Jody McCaffree helped form Citizens Against LNG to fight the Jordan Cove terminal. (Read the Journal’s in-depth article on the fight against the Jordan Cove terminal here.)

By late 2015, Pacific Connector had secured just 2.8 percent of the construction easements and only 4.7 percent of the permanent right-of-way easements it needed for the pipeline. By then, the natural gas market had also shifted, to the landowners’ advantage. The energy companies were having a hard time demonstrating the need for their project. They had not secured any contracts for the exported LNG, nor had they conducted an “open season,” during which shippers enter into long-term agreements with the LNG suppliers. Evans knew this was their opportunity.

“The company had to show that their project had a public benefit, and this had to make up for the adverse impacts of eminent domain,” says Evans. “We hired a couple of attorneys and worked non-stop to create a letter.” Sixty-three landowners signed the letter opposing the projects.

In March 2016, FERC officially denied the permits for the Jordan Cove export terminal and Pacific Connector pipeline. In its denial letter, the agency explained that it had balanced the impacts of the proposed project against the benefits to be gained in a “proportional process” — the more adverse effects associated with the project, the greater the public benefit needed to be to achieve approval. In this case, FERC found the benefits touted by the energy companies — meeting the demand for exported LNG and providing natural gas to Southern Oregon customers, as well as the economic benefits of construction and operation jobs provided by the projects — were outweighed by negative impacts on local landowners.

A few weeks later, Oregon LNG announced it was suspending plans for an LNG terminal in Warrenton, Oregon, near the town of Astoria. As with Jordan Cove, this project faced intense local opposition from citizens, tribes, and environmental groups concerned about the impacts to water quality, fish habitat, and community safety.

These decisions came on the heels of the Obama Administration’s rejection of Keystone XL, a 327-mile pipeline that would have routed oil from Canada’s Oil Sands to Nebraska. Do these aborted fossil fuel projects signal a changing tide against fossil fuels, or are they simply signs of a stagnant market?

For now, the market is on the side of those working to thwart new natural gas infrastructure. When the “fracking boom” began flooding the domestic market with natural gas in the late 2000s, energy companies looked to exporting. But new sources of supply, particularly from Australia, have caused a global glut of natural gas, even as milder winters and the economic slowdown in Asia have reduced demand.

In Japan, the world’s largest LNG importer, prices for arriving LNG have plummeted from $18.30 per million British thermal units (BTU) in March of 2014 to $5.30 per million BTU in April 2016.

Still, the natural gas industry continues to push for expanded fossil fuel infrastructure. As of this writing, there are 22 proposed LNG export terminals in the US and Canada. Of the 16 projects that have been approved, seven are under construction. Several of these are import terminals in the Gulf Coast states that are now being converted to export terminals. And in February of 2016, the first tankers full of US-produced LNG left Sabine Pass, Louisiana, en route to Brazil.

“The Gulf Coast facilities coming on-line are enough to potentially meet the demand predicted by some forecasts for the near future,” says Nathan Matthews, staff attorney for the Sierra Club.

So where does that leave projects that are under construction or yet to be approved?

After the controversial Cove Point LNG export terminal, located on the Chesapeake Bay in Lusby, Maryland, was approved in September 2014, Sierra Club and several other environmental groups sued, arguing that the FERC should consider the “cumulative impacts” of induced drilling by all approved and pending LNG projects, rather than consider each project individually. Together, the export terminals will remove a substantial volume of natural gas from the domestic market. Something else will have to make up for that volume, and that something else is likely to be natural gas from additional drilling. More recently, Sierra Club also requested a rehearing from the Department of Energy, arguing that its environmental review failed to consider these impacts. DOE denied the request.

The Sierra Club continues to protest all new LNG projects and many proposed new pipelines at the agency level. “We’re concerned about impacts on habitat fragmentation, stream crossings, etc.,” Matthews says. “But all of these pipelines share bigger picture concerns.” These include the emissions sparked by increased natural gas consumption, and also the emissions caused by the drilling and transportation of the fossil fuels.

New natural gas plants emit 50 to 60 percent less carbon dioxide than coal burning plants, and proponents tout natural gas as the “bridge fuel” that will help us wean off dirty coal. But natural gas wells and pipelines leak methane, a much more potent greenhouse gas than carbon dioxide, and recent research indicates that US methane emissions have increased by more than 30 percent over the past decade. The Obama Administration has acknowledged the natural gas industry’s role in methane emissions, and the EPA recently set new standards curbing emissions of methane, VOCs and toxic air emissions from the natural gas and oil industries.

Whether it’s being used domestically or shipped overseas, new drilling leads to higher gas consumption, which causes more emissions and contributes to global climate change, Matthews says. “New natural gas wells are not going to help us wean off of fossil fuels, which we need to do if we are going to meet our climate goals,” he says, referring to the landmark Paris Climate Agreement reached in December of 2015.

“Sierra Club’s first argument is that DOE and FERC failed to even take a hard look at the climate impacts of exports,” says Matthews. “We’re also confident that if they did so, they’d see that exports are bad for the climate, and are inconsistent with both the domestic and global emission trajectories needed to limit warming to 1.5, or even 2, degrees [Celsius].”

Back in Oregon, Pacific Connector, Jordan Cove, and the State of Wyoming have appealed FERC’s permit denial. But even if FERC upholds its decision, the energy companies can start over with a new application, when and if the market improves. Meanwhile, they have been seeking the many other permits they would need in order to proceed, including one from the Oregon Department of Energy for the South Dunes Power Plant, a 420-megawatt facility that would power the liquefaction of the natural gas.

Citizens opposing Jordan Cove are not resting on their laurels. They understand that, if market conditions change to favor new LNG infrastructure, they will have a tougher case to prove to FERC. Once again, the agency will have to weigh the so-called “public benefit” of the project against its adverse effects, and the agency could well decide the benefits of exporting LNG to meet a legitimate demand outweigh the negative impacts to landowners, communities, and the environment.

Evans is lobbying state agencies to reject the project once and for all, and state lawmakers to support legislation that promotes renewable energy. McCaffree of Citizens Against LNG says the project opponents must stay vigilant. McCaffree has learned more about the legal process than she ever cared to. She is currently working on a brief in the contested South Dunes Power Plant case, as one of the individuals or organizations granted “party status,” and thus allowed to participate in the appeals process. The case is currently on hold.

Clarification: An earlier version of this story stated that McCaffree had submitted a brief to the Oregon Department of Energy commenting on the South Dunes Power Plant. However, she is currently working on a brief for the case.