In Review: The Water Knife

Paolo Bagicalupi’s new near-future thriller arrives at a depressingly appropriate moment. As the Golden State enters its fourth year of drought, with snowpack at an all-time low and unprecedented mandatory rationing being imposed, headlines in the New York Times blare “The End of California?” It’s not hard to feel that the parched western states are taking a turn for the apocalyptic. 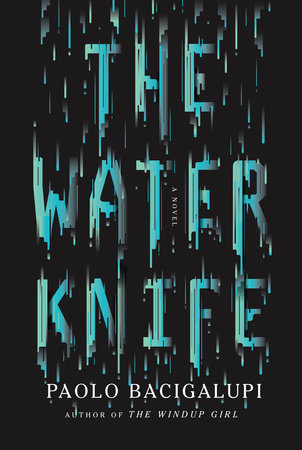 To some critics and commentators, climate change is also having a deep effect on literature, as more authors focus more closely on the actual and possible consequences of the subject in their fiction. The genre, if it can be called that yet, represents a loose affiliation that stretches back at least to J.G. Ballard’s The Drowned World and includes such authors as Ian McEwan, Ursula Le Guin, Kim Stanley Robinson and Margaret Atwood. The Water Knife is perhaps the best, most-recent example of “climate fiction,” and it expertly taps a wellspring of fascination and fear that runs beneath a culture ever digging a deeper hole for itself and the environment.

Set only a few years hence, The Water Knife features three point-of-view characters whose fates become violently entangled in a Phoenix ravaged by dust, heat and crime. The American states aren’t so united anymore, some with borders closed to any desperately thirsty migrants making their way upstream.

Angel Velasquez is the titular “water knife,” a combination gumshoe and hired killer who makes the incisions that keep potable water flowing in the desired direction. The drought is a money-making opportunity for him, a chance to live well as a gun-for-hire for the Southern Nevada Water Authority and its imperious corporate leader, Catherine Case, also known as “The Queen of the Colorado.” Angel, Case and other SNWA operatives work to keep the fountains burbling in Las Vegas, at the extreme expense of everyone downstream. Case isn’t above launching a missile attack on a rival city’s water-pumping plant to protect her own interests. When she hears rumors of a game-changing water source, she puts Angel, in his tricked-out Tesla, on the job.

Meanwhile, Pulitzer Prize-winning journalist Lucy Monroe hangs on as a resident of Phoenix, telling herself she’s not merely another “collapse pornographer.” She keeps searching for the next big story, the one that will justify her not bailing town to live with her sister’s family in misty Vancouver. The scoop arrives in the shape of the mutilated corpse of her friend Jamie Sanderson, a legal associate for Phoenix Water. When Lucy encounters a second corpse bearing evidence of the same kind of torture as Sanderson, she unwittingly gains the attention of Angel and is pulled into his shadowy world.

The third point on the triangle of coincidence is Maria Villarosa, a teenaged Texas migrant who dreams of traveling north and getting across the Nevada border to Las Vegas somehow. She’s smart enough to make a windfall by buying drinking water when it’s temporarily cheap and selling it on the streets when the price bounces back up. But she’s not careful enough to remember to kick something up to the neighborhood criminal kingpin, the Vet, who keeps a pack of hyenas on his property in lieu of the usual watchdogs. Her mistake puts her on the path toward a tawdry night of sex work that is her only hope of making up what she owes.

A former reporter and webmaster for High Country News, Bacigalupi made his mark in 2010 with the more overtly science fictional The Windup Girl, set in a post-petroleum Thailand rendered almost unrecognizable by rising seas and out-of-control genetic modification. The extrapolation in The Water Knife is markedly less surreal, but it is not without the ability to shock the reader into thinking more carefully about how water — and the lack of it — powers more than just the obvious aspects of daily life. Paying homage to Marc Reisner, Bacigalupi demonstrates throughout the novel his strong familiarity with the history of water systems in the west and shows himself especially cognizant of their vulnerabilities.

Bacigalupi isn’t prone to info-dumps, however, preferring to build the setting through small telling details. He drops brand names, street slang and political/religious affiliations — “Clearsacs,” “blood rags,” “Zoners,” “the Cartel States,” “Merry Perrys” — and lets them rattle around for a while before providing the context that snaps their meaning into place.

Bacigalupi is working within a well-established mode of science fiction, the “If this goes on…” storyline. Especially popular in the seventies, examples include John Brunner’s The Sheep Look Up, set in a future destroyed by water and air pollution, and Harry Harrison’s over-population thriller, Make Room, Make Room, filmed as Soylent Green. But there is in Bacigalupi’s work a deep sense of urgency in his prognostications, an urgency often found in other recent climate fiction, such as Flight Behavior by Barbara Kingsolver or The Year of the Flood by Margaret Atwood.

He also knows how to effectively contrast the worlds of the haves and the have-nots. Most of the remaining residents of Phoenix can do little better than squat in housing developments stripped of all but their most basic building materials. Meanwhile, Chinese construction companies are building vertical living spaces that allow the rich to prosper in comfort.

There are shootouts and double-crosses, an unlikely romance and unexpected betrayals. Like many of the best tales of suspense, the plot involves a McGuffin that everybody is looking for and killing for, without truly understanding what it means.

The Water Knife is a carefully constructed thriller, with elements of Chinatown and The Maltese Falcon. But the novel ultimately transcends its pulpier origins. Bacigalupi offers a carefully calibrated warning of what might happen if the US refuses to address global climate change and its own water-wasting ways. It’s one we ignore at our peril.

At one point near the end of the novel, Lucy muses, “The world is big, and we broke it.” Most readers will hope there’s still time to prove her wrong.