Russian aggression in Ukraine during the past year has made many Westerners anxious about Vladimir Putin’s territorial ambitions and his penchant for saber-rattling. While the warfare in Ukraine — along with the Putin government’s crackdown on dissidents like Pussy Riot and its hostility toward gays and lesbians — has received a good deal of attention in the international media, the Russian government’s wholesale repression of civil society organizations, human rights groups, and Indigenous advocates is less well known. Environmentalists have also been targeted by the authoritarian Putin regime. Today in Putin’s Russia, it’s considered almost treasonous to speak out for environmental protection. 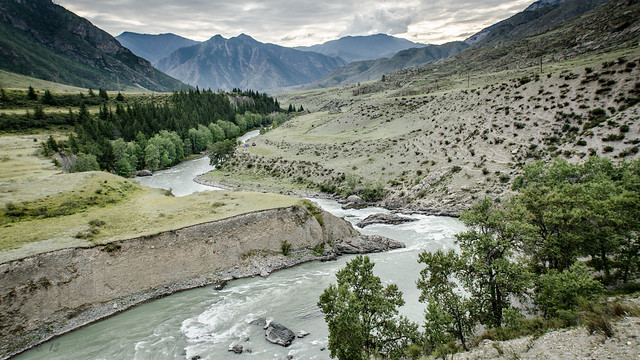 One of the more potent — and insidious — tools of government repression is something called the law “On Foreign Agents,” which went into effect in 2012. This law was nominally established to require Russian non-governmental organizations receiving foreign funding and engaged in “political activity” (only vaguely defined) to register as “foreign agents.” But the mere use of the term “foreign agent” threatens political freedom. In Russian language and history, the term is synonymous with being a treasonous spy; the label alone discredits important work being undertaken by defenders of human, environmental, and Indigenous rights. In Russia’s state-controlled news media, poisonous rhetoric and slurs fill not only the comment sections of articles, but the articles themselves, making it challenging for important topics like environmental justice and human rights to be discussed productively.

I personally have witnessed how this law has been used to quash civic engagement. I’m the director of The Altai Project, an Earth Island Institute-sponsored project that supports the work of environmental justice and conservation groups in Altai Republic, on Russia’s frontier with China, Mongolia, and Kazakhstan. Since the late 1990s, we have supported successful advocacy against ill-conceived hydroelectric dams, a gas pipeline, and development threats to protected areas and sacred sites, while at the same time promoting renewable energy, sustainable tourism, and thriving Indigenous communities.

In just the last six months, I have seen how Russian authorities have wielded the Foreign Agent Law to target the strongest defenders of Altai’s environment — perhaps as a measure of those groups’ prior successes.

On February 12, the Siberian Environmental Center, a team of tough, science-based advocates for raptors, manul cats, and other wildlife, was listed as a “foreign agent.” Next was the Center for Independent Researchers of Altai Republic, a small organization investigating illegal mining practices. On June 10 its director was forced to voluntarily join the Foreign Agent registry or risk losing his day job and face a huge fine. On June 23, Gebler Ecological Society was listed as a foreign agent. Among its many other accomplishments, the group has established a legal precedent against illegal logging within protected areas. The organization is currently reviewing the Russian Justice Ministry’s findings against it. The Fund for 21st Century Altai, which helped to establish the “Golden Mountains of Altai” UNESCO World Heritage Site and block a proposed large dam on the Katun River, is awaiting a similar ruling as a foreign agent.

While the Foreign Agents law does not disband or ban an organization, there are subsections of the law that permit hefty fines in certain cases. In the past the fines have only applied to the organization, but recently the Russian government has been fining the leaders of organizations. Most upstanding organizations that receive the label voluntarily shut down because being classified as a “foreign agent” wrecks their credibility.

The remaining environmental and Indigenous rights groups in Altai that haven’t been ensnared yet are hanging on, perhaps thanks to whatever political connections they enjoy. Yet they are distracted and wearied by constant and lengthy bureaucratic audits. Even without being labeled as “foreign agents,” their credibility is questioned simply because they are publicly known to receive grants from abroad or to have foreign connections.

By classifying Altai’s biggest and most experienced environmental defenders as “foreign agents,” the Russian government is attempting to stop these groups from shining much needed light on critical issues such as mining licensing and rights, destruction of endangered flora and fauna, government corruption, and the rights of local residents to clean water, safe infrastructure, and information about natural resource use decision-making.

At the same time, the Russian government is also implementing a punitive new law “On Undesirable Organizations.” This law allows the Russian government to target foreign organizations that it deems a threat to constitutional order, defense, and security. Russian activists and organizations accused of associating with these foreign “undesirable organizations” can face administrative fines and potential criminal penalties. The law is quite clearly designed to isolate Russian activists and limit their advocacy and access to information and support. Groups such as the National Democratic Institute, MacArthur Foundation, and the (Soros) Open Society Institute have already been mentioned as potential targets. The Altai Project and Earth Island Institute could even be banned under this law.

As my colleagues work their cases through the Russian legal system (without much hope), they have to consider their options. Disband the organization? Continue to work informally? There is little hope of creating new or replacement organizations; their leaders are too well known to fly under the radar. Will they be able to receive the foreign funding upon which their work often depends? Can they create a commercial entity and somehow resume formal operations? While it is possible for groups to be removed from the Foreign Agent registry, this can only happen if the organization can demonstrate that is has not received funding from overseas for a 12-month period.

And yet. While these laws definitely have had a chilling effect on environmental advocacy, life goes on in Altai. Altai Republic is almost 2,400 miles from Moscow; it’s like being in Montana, while the politicians and bureaucrats rage on in Washington. Our partners continue their scientific studies of snow leopards, argali sheep, and steppe eagles. They still monitor the activities of mining companies, state oil firm Gazprom and its proposed pipeline, and telecom utilities building transmission towers in the steppe. They continue to gather and share evidence of corrupt misdoings, and, perhaps most importantly, they continue to speak the truth to local residents and government officials. This is courage, and we are proud to stand behind them.

With support from The Altai Project’s small grants program, this summer our activist partner organizations conduct research expeditions and advocacy. For example, NGO Arkhar will spend many weeks surveying snow leopard and argali sheep activity, as well as coaching local rangers and former poachers in the art of wildlife surveying and tracking. Despite the challenges, our Altaian partners work tirelessly to educate local residents of their rights to be informed of resource and infrastructure development taking place in their proverbial backyards.

As international sanctions isolate President Putin’s government, we at The Altai Project and Westerners everywhere must maintain our support of grassroots conservation advocacy in Russia. We must stand by our trusted and extremely committed local partners in Russia. The financial and moral support we can give provides comfort and hope for a new tomorrow as well as critical funds to continue the important of work of protecting Russia’s beleaguered environment.