The first time I saw an Illinois chorus frog (Pseudacris illinoensis), its guts were splayed out in a mason jar.

“One of the cool things I found was a beetle larva,” said Jacob Forbes, a biology graduate student at Southern Illinois University Edwardsville. He held up a small vial containing insects, a type of beetle larvae that is only found underground, and a pinch of sand.

The Illinois chorus frog lives, burrows, and eats in sand, and spends about 85 percent of its life underground. The frogs are listed as threatened at the state level. Photos courtesy of Richard Essner.

These were the last meals of a dissected chorus frog, victuals that the animal likely hunted and ate in a terrestrial setting, rather than an aquatic one. Across the hall from Forbes’ bedroom, more frogs had been stuffed into a freezer. When the Covid-19 pandemic struck, shutting down his usual workplace, Forbes set up a makeshift laboratory at home to continue his work.

To collect each frog, Forbes scrapes their flattened carcasses from pavement, dissects the roadkill, and sifts through their final meals. The sand and underground beetle larva, though unremarkable at first glance, marked a research breakthrough.

“They have seen this in a lab setting before, but nobody’s done a dissection that shows that they are feeding underground in the wild,” Forbes told me in early August.

Most frogs make their homes near water, spending their days near ponds and streams. But the Illinois chorus frog lives, burrows, and eats in sand, according to a 2016 report by the Prairie Research Institute at the University of Illinois at Urbana Champaign, spending about 85 percent of its life underground. Forbes’ findings, not yet peer-reviewed, are the first direct field evidence of this unique behavior. His observations suggest that these frogs somehow detect and eat prey underground by sensing the minute vibrations of insects scuttling beneath the sandy soil.

His research is shedding more light on these peculiar frogs at a dire time, too. Soon, a new neighbor will move in next door — one noisy enough to potentially disrupt the way that these frogs sense and capture their prey. A 30,000-acre wind farm — an area about 25 percent larger than Disney World — is set to be installed near an Illinois chorus frog habitat in Mason County, Illinois.

That wind farm, called the Glacier Sands Wind Project, was submitted to the Illinois Department of Natural Resources (DNR) for approval in May 2019. A conservation plan for the project, which addressed potential impacts to the chorus frogs, was cleared in February 2020, according to public records, and concluded that the wind farm would not “reduce the likelihood of survival” for these frogs. The new wind farm, owned by Cordelio Power, has an expected completion date of October 2021, according to a press release, and will include “up to 53 wind turbines” and impact an estimated 8.72 acres of chorus frog habitat. Cordelio Power did not respond to requests for comment. 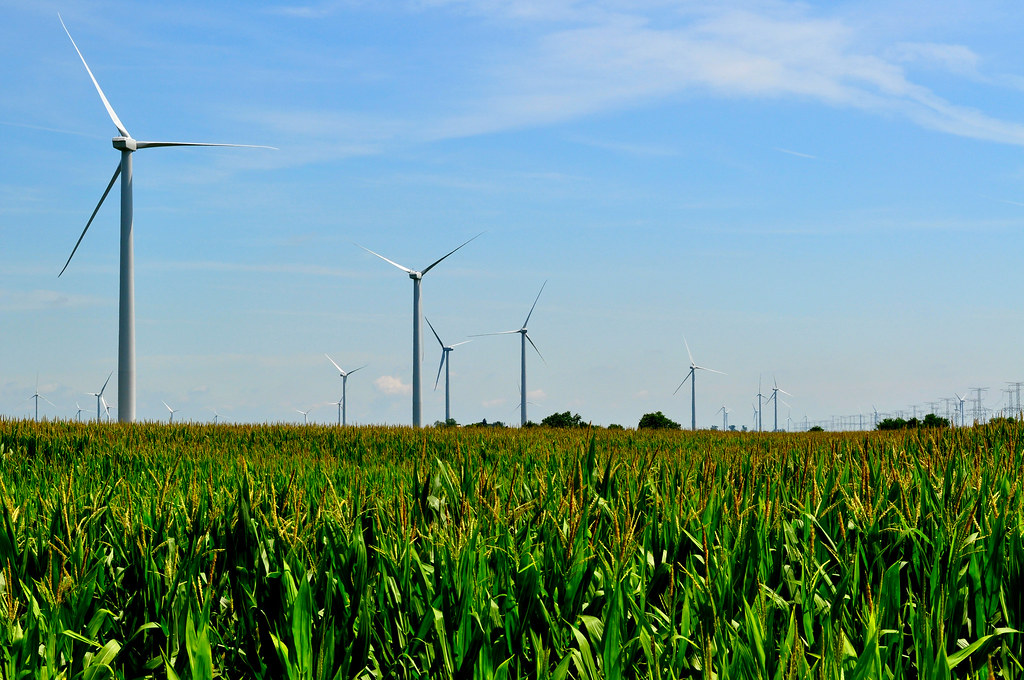 A wind farm in Illinois. Vibrations from the wind turbines of the proposed the Glacier Sands Wind Project are likely to impact the frogs’ feeding rituals, researchers say. Photo by Tom Shockey.

Though Forbes’ research is revealing new insights into these animals, it’s not the first time that herpetologists have observed their underground feeding. In 1978, Lauren E. Brown, a herpetologist at Illinois State University, placed Illinois chorus frogs in a sand-filled aquarium and covered it with a metal mesh to block the animals from rising to the surface. Brown dropped in some meal worms, waited a few days, and then dissected the frogs. Many of them had dined on the worms underground.

Vibrations from the wind turbines are likely to impact the frogs’ feeding rituals, says Richard Essner, a herpetologist at Southern Illinois University Edwardsville and Forbes’ research mentor, but the degree to which they will do so remains unclear. Essner has already applied for a small grant from the Illinois DNR to capture a few chorus frogs, bring them to the lab, and shake them in large terrariums. He wants to see whether vibrations will affect the frogs’ ability to detect and eat prey in their sandy habitats.

Forbes estimates — using geospatial data — that the shortest distance from a wind turbine to a chorus frog breeding pond in Mason County would be about 400 meters. “The issue is, while the frogs breed in these ponds in the spring, they disperse into the sand prairie for the remainder of the year,” says Forbes. And since “the proposed wind turbines were placed directly on top of soil layers classified as ‘sand’ by the [United States Geological Survey], it is safe to assume that Illinois chorus frogs may be found extremely close to these wind turbines if they are built.”

Other animals, like European antlions and sand viper snakes in the Sahara desert, also sense prey through vibrations pulsing through sand. But Essner says that the chorus frogs are special. “They’re probably the best vertebrates in their ability to detect vibrations,” he says. “Most herpetologists that I talk to, it’s kind of a problem, but there’s a phenomenon where if you get close to a frog while it’s chirping, they stop. They can detect your vibration even when you’re absolutely quiet.”

Chorus frogs emerge to breed every spring, likely after sensing raindrops pitter-pattering on the ground, or by listening for the call of other frogs. That’s according to Essner, as well as original research performed by Brown and other herpetologists in the 1980s. 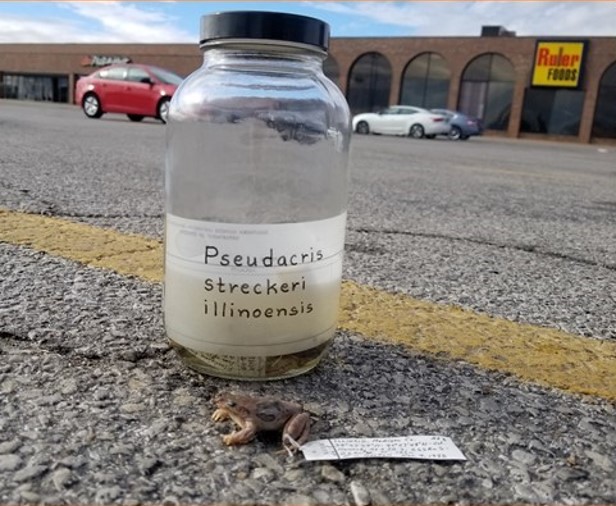 Dead frogs from the Granite City population, including one animal that is well-preserved. Photo taken in front of the shopping mall that likely contributed to their extirpation. 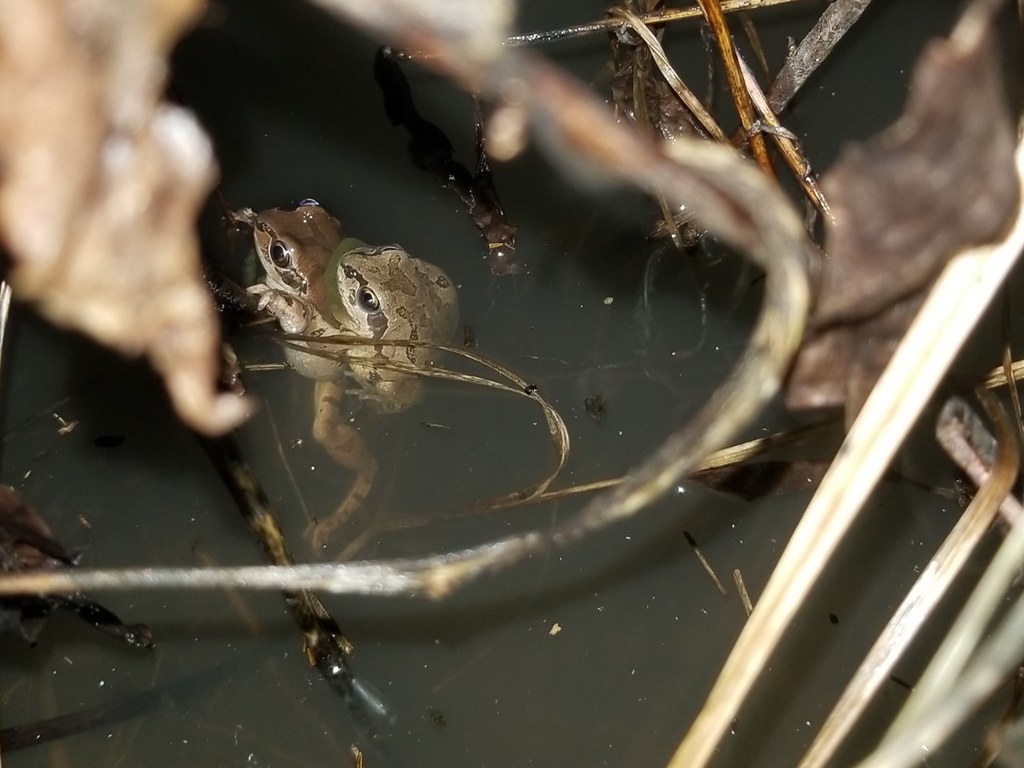 Artificial breeding ponds for the frogs at Southern Illinois University.

Protecting these rare frogs is a top priority for Essner and Forbes, especially since amphibians globally are dying en masse. Fragmented habitats and chytridiomycosis, a fungal disease, have caused the extinction of at least 90 amphibian species in the last few decades. The chorus frogs have also suffered, mainly because of property development and new roads.

“This frog has probably gone from 17 down to 11 counties,” says Scott Ballard, a herpetologist at the Illinois DNR, who oversees the chorus frog population in southern Illinois. Chorus frogs are also found in Missouri and Arkansas, mainly in small, protected habitats that have been set aside for conservation.

Illinois chorus frogs are already listed as threatened at the state level, according to Ballard, before the wind farm application was submitted. In 1991, there was a petition — which ultimately failed — to list the animals as threatened or endangered under the federal Endangered Species Act. In 2015, another petition was submitted, but no decision has been made on their status. If the US Fish and Wildlife Service lists the Illinois chorus frog as a threatened or endangered species, there “could be more money for habitat protection,” says Ballard.

Despite a current lack of federal protections, Essner thinks that a population of chorus frogs in southern Illinois — not the animals threatened by the new wind farm — has remained largely steady in recent decades.

“In the 90s, I think the population was estimated around 400 adults,” he says. “I think that number seems to be reasonable to me in terms of the population today, but we don’t know for sure.” Essner’s estimates are based on an ongoing tagging study in which tiny transponders, injected beneath the skin of chorus frogs, are used to count each animal.

Still, other chorus frogs populations have not been so fortunate.

Ballard often drives to locations where chorus frogs were once found and diligently listens for their calls — a high pitched chirp that can be heard over a mile away. Two populations in Illinois have already vanished from their habitat, according to Ballard. One of them, in Granite City, Illinois, hasn’t been heard for years. A shopping mall sits on their former breeding pond.

Now, even as the wind farm moves forward in Mason County, a hundred miles to the north, researchers hold out optimism for the species’ survival. After all, this isn’t the first time that chorus frogs have been threatened by local development. In 2016, a large company built warehouses just down the street from the population that Forbes studies, increasing local motor vehicle traffic. Those frogs now have to cross a busy road to get to their breeding pond, nearly a kilometer away.

To offset their environmental impact, the company gave Essner about $10,000 to study the frogs’ population and test ideas for saving them, says Kevin Helenthal, whose work was partially funded by that grant. Helenthal spent about $300 to buy large, concrete mixing tubes, and he turned them into artificial breeding ponds. Now, instead of crossing the road, the frogs emerge from the sand and breed in those tubs.

“What our results showed after three seasons is having the pool in the sand prairie actually was the best option for them,” says Helenthal, a graduate student who previously worked with Essner. “The males were setting up their calling spots and were breeding. We had tadpoles in the spring of 2019.”

When Helenthal first saw the tadpoles, he fired off excited texts to Essner, replete with photos and exclamation points. Those little tadpoles, swimming in concrete mixing tubs, could offer hope for the species, he said.

But they, like their parents, will have to adapt to new surroundings.

During my visit to Illinois in August, I stayed in Decatur, a town smack dab in the middle of the state. As I drove south, speeding towards the St. Louis airport to catch a flight to New York, I passed row after row of gleaming, white wind turbines. They weren’t here a few years ago, during my first visit to the area. Now, they tower over farms, spinning in the wind over this changing landscape.

Niko McCarty is a freelance journalist in Manhattan, NY. He often writes about gene editing, bio-ethics and the environment. Previously, he studied bioengineering at Imperial College London and Caltech. Find him on Twitter @NikoMcCarty.