Colombia’s national parks were created as both a showcase for the country’s spectacular biodiversity and as a protected refuge for its delicate ecosystems. But in recent years, they have instead become a haven for criminal activities that are leaving a trail of environmental devastation.

Colombia is one of the world’s 17 most biodiverse countries. Due to the great variation in altitudes and climates within the country — from high mountains to pristine white sand beaches — this South American nation is home to many rich and varied ecosystems. Its 314 types of ecosystems host nearly 10 percent of the planet’s biodiversity. Worldwide, it ranks first in bird and orchid species diversity and second in plants, butterflies, freshwater fishes, and amphibians.

Nowhere is this rich and complex array of life more evident than in its network of 59 national parks, which span snow-capped mountains of the Andes, the Amazon rainforests, coastal cloud forests, open savannas and the Caribbean islands. These parks hold within them archaeological treasures, uncontacted indigenous tribes, endangered flora and fauna, such as jaguars, cotton-topped tamarins, and spectacles bears, black cedar, and Colombian palm, and (perhaps unfortunately) a wealth of mineral resources. 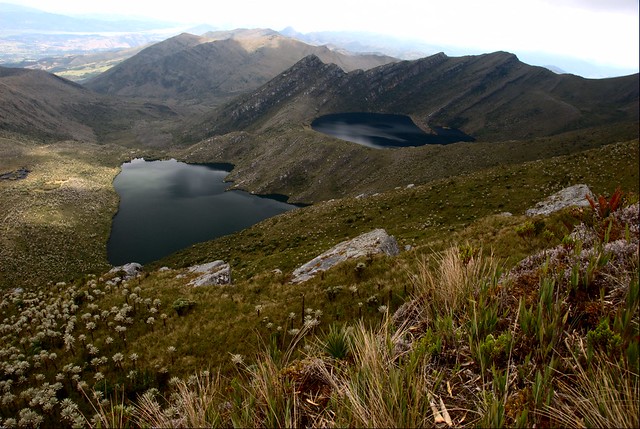 Photo by Luis Alejandro Bernal RomeroFausto and Siecha-Mitov lagoons in Chingaza National Park, near Bogota. The South American nation, which has more than 300 varied ecosystems, holds nearly 10 percent of our planet’s biodiversity.

However, the parks are also home to guerrilla insurgents and criminalized paramilitary groups that have been drawn to the wilds by the lucrative prospect of exploiting coca crops and cocaine production and illegal mining and logging. The invasion of these underworld networks has been accompanied by ecological destruction and contamination that threatens the future of some of Colombia’s most fragile protected areas.

“It is a confluence of illegal forces and groups that profit from these activities,” says Elsy de Alcalá, advisor to the leadership board of Parques Naturales Nacionales (PNN), the government body that oversees the country’s national parks. “These could be the most critical problems we face in our parks.”

The most visible of these criminal activities is the cultivation of coca, the base ingredient for cocaine. Eight percent of the coca grown in Colombia has been planted on 5,457 hectares of land in 16 national parks, according to the most recent coca survey by the United Nations Office on Drugs and Crime (UNODC). The amount of parks land used for coca leapt 45 percent in 2014 and has increased 70 percent since 2011, according to the UNODC.

The crops leave behind a hugely damaging ecological footprint.

“On one hand there is the cutting down of natural forests and on the other impoverishment of soil and contamination from the chemicals they apply,” de Alcalá says. “Each time [they plant] they are changing the conformation of the soil in a way that is very difficult to recover from.”

However, the increase in coca crops in recent years has largely been concentrated in just two parks in the east, and across the country coca plantations as such are not the main criminal threat to national park ecosystems, says, Leonardo Correa, the head of the UNODC’s Integrated Illegal Crop Monitoring System (SIMCI).

“In general, the parks are not that attractive for crops but there are other activities they are ideal for, especially [cocaine processing] laboratories,” he says.

According to Correa, criminal networks capitalize on the inaccessible expanses of national parks to conceal their processing labs. The multiple-step process of turning coca leaves into cocaine uses a cocktail of toxic chemicals such as ether, sulfuric acid, and acetone that are dumped into nearby streams or directly into the ground.

The UNODC monitoring flights over national parks have revealed another alarming trend that could potentially be even more damaging than coca crops.

“We can see the footprints left by gold exploitation,” Correa says. “There has been a really strong increase in this over the last three years.”

In forests and river valleys, backhoes and dredges are used to tear into river banks and nearby forests in search of alluvial gold deposits, while in more mountainous regions, unlicensed miners excavate tunnels with explosives. In the eastern Amazon region, miners also search for tungsten and coltan — minerals that are used many consumer products, from automobiles to sports equipment to electronics.

Each type of mining leaves scarred terrain and destroyed habitats. However, the most serious environmental concern is the mass dumping of toxic chemicals used to extract gold, principally mercury and cyanide, which permeate ecosystems with devastating effects on both wildlife and human health.

The most insidious of these toxins is mercury, which is passed along the food chain. An investigation carried out by PNN into mercury contamination in indigenous communities that live downstream of these mining operations found alarmingly high mercury levels in the bodies of community members. Even new born babies’ test results revealed mercury levels 12 times higher than what is considered safe by the US Environmental Protection Agency.

“There is a high demand for this wood, which generally leaves the country because foreign customers pay very well,” de Alcalá says.

These logging networks recruit locals to cut down the trees and then move the timber out of the parks along the rivers. The logs are then loaded onto trucks marked as species from legal logging operations and taken to collection points for dispatch abroad.

Behind the illegal activities that are ravaging Colombia’s National Parks lurks a murky patchwork of armed groups and criminal networks.

Marxist guerrilla groups especially, have long capitalized on the isolation of the national parks, melting away into their nearly-impenetrable wilds and using their vast expanses to hide kidnap victims. However, the guerrillas are not alone. The criminalized remnants of paramilitary counter-insurgency groups and mafia organizations have also expanded into parks.

Photo by phoenixdiaz/Flickr T Behind the illegal activities that are ravaging Colombia’s National Parks lurks a murky patchwork of Marxist guerrilla groups, the criminalized remnants of paramilitary counter-insurgency groups, and mafia organizations.

As is the case around the country, guerrillas and paramilitary groups are the overseers of coca cultivation in the parks, charging farmers “taxes” on their crops, monopolizing coca paste trading, and guarding plantations from state authorities with landmines and snipers.

These armed groups are usually not directly involved in illegal mining in parks, but they still manage to extract huge profits from these operations. Any mining operation that falls within the borders of an armed group’s territory must pay the price, whether it is a fee per machine, a percentage of the mineral extracted, or a flat fee every week or month so that they can continue their work. According to PNN, in some cases armed groups do take their involvement in mining further, directly exploiting mines with labor brought in from elsewhere in the country.

In illegal logging, armed groups play a more regulatory role, charging logging gangs a fee to enter and work in their territories and further fees to guarantee safe passage for the timber afterwards.

Ironically, it is one of these armed groups that now represents the best opportunity to reclaim Colombia’s national parks from the underworld. After 52 years of fighting that has claimed some 220,00 lives and displaced millions, and nearly four years of peace negotiations, on June 22, the country’s largest guerrilla group, the Revolutionary Armed Forces of Colombia (FARC) and the Colombian government announced that they have reached a deal on a bilateral ceasefire. The deal will not only bring to an end to half a century of conflict, it could also open the way for the recuperation of the damaged ecosystems in this country’s national parks.

One of the central aspects of the deal agreed to is a new policy to tackle coca production by offering farmers legal alternatives. The locations for the program’s pilot schemes have already been announced and among them were seven national parks.

The plans being developed for the parks are designed not only to rid them of coca but also to recruit a force of conservationists from among the ranks of the coca farmers. Farmers who wish to remain in the parks will be trained to reverse the damage done by coca cultivation, cocaine processing, mining and logging.

“We are offering them the opportunity to join up with ecological restoration activities to recuperate zones that have been affected by crops or other illegal activities and bring back the ecosystem,” de Alcalá says. Coca farmers will also be offered jobs in control and monitoring of conservation projects in protected areas and as guides on eco-tourism projects, she adds. Those who refuse to participate will face seeing their crops ripped up by eradicators emboldened by the absence of the guerrillas.

However, tough challenges lie ahead. The logistical task of implementing the program is daunting, and the Colombian state’s track record with coca substitution programs is poor. And while much of the FARC may be willing to abandon their criminal interests in National Parks, such vacuums tend to be quickly filled by other armed actors when high profits are at stake.

With the future of Colombia’s natural resources, not to mention its natural wonders at stake, much could hinge on the peace deal. If the government fails to capitalize on the opportunity, the impact could extend beyond the country’s borders, de Alcalá says.

“The national parks are the natural riches, the patrimony of the country,” she says. “But they are also part of an international system of protected areas that need to be conserved to protect the global ecosystem, Colombia is a part of this worldwide balance.”