Dr. S. Velvizhi remembers watching her father fish off the razor-sharp coastline of Nagapattinam in the south Indian state of Tamil Nadu when she was a child. In the early morning, the artisanal fisherman would leave on a wooden boat into the Bay of Bengal. Many things could go wrong. Some days he’d return with no catch. There was little warning if the weather took a turn for the worse, no communication if he lost his way or wandered across the International Maritime Line. His life was as choppy as the waters he ventured into for a living.

“His experiences have influenced my work. Even today I go back to him for advice,” says Velvizhi.

Today, Velvizhi is a marine biologist and leads the Fish For All Centre at the M.S. Swaminathan Research Foundation (MSSRF) in Poompuhar, Nagapattinam district. Her goal is to build on her father’s experience, to make fishing safer for fishers, and to build more sustainable fisheries.

In her early years, Velvizhi, the first in her family to earn a doctorate, faced caste and gender barriers that prevent many Indians from pursuing higher education. However, these formative struggles have shaped her work bringing relevant science and technology to coastal communities.

“I discontinued after a Master of Philosophy in Marine Biology in 2002 because my family could not afford it,” she recalls with a smile, with no bitterness in her voice. She resumed her doctorate in Marine Biology a decade later while working at MSSRF. “My uncle pitched in with hostel and college fees at the postgraduate level. After that I joined MSSRF and was posted in Rameshwaram, nearly 265 kilometers away from home. That was my first job, we just needed the money,” she recalls.

There are over 864,749 marine fisherfolk households like Velvizhi’s family in India. These households comprise over 4 million people across 3,288 fishing villages. Over 90 percent of marine fisherfolk engage in traditional fishing, and nearly two-thirds of them live below the poverty line, the 2010 Marine Fisheries Census shows. Their literacy levels are at 58 percent, lower than the national average of 74 percent.

Velvizhi is an outlier in many ways. As she climbed the educational ladder, she found fewer people from her own community of Meenavars, categorized as “most backward classes” in the state of Tamil Nadu, a term given to several castes categorized by the government as educationally or socially disadvantaged.

“At the doctorate level, I found no women from my community,” she recalls. “Today you may find Meenavar teachers, activists, or [political] leaders at the village council level, but not scientists.”

In India less than 15 percent of scientists are women — below the global average of 30 percent. Students from marginalized castes comprise just 5 percent and 34 percent respectively of total enrollment in higher education across all streams. Even fewer enter the science, technology, engineering, and math sector, and a handful of them are women from marginalized groups. While it’s widely accepted that the representation of marginalized castes groups in STEM is very little, the exact number isn’t known.

“There are three broad underlying structural issues in my experience,” explains Velvizhi. “Lower castes lack guidance, access to networks and opportunities, and language skills.” Caste-based discrimination is illegal in India, but, like racism in the West, it continues unabated in myriad forms.

The cultural and social capital available to the upper and lower castes is far from equal. First, lower castes lack access to quality education and career counseling. Boys are pressured to work early, often in traditional occupations of the community. Girls are forced to marry early, or to discontinue schooling if mobility becomes a concern.

“There is often the need to earn immediately after school,” says Velvizhi. “We have to do things as they come, without any clarity about the path to higher studies or alternative careers.”

This hurdle is followed by the next: access to networks and opportunities. “Even if I pursue a science degree, I may not know suitable jobs out there, or skills required for the same,” Velvizhi says. 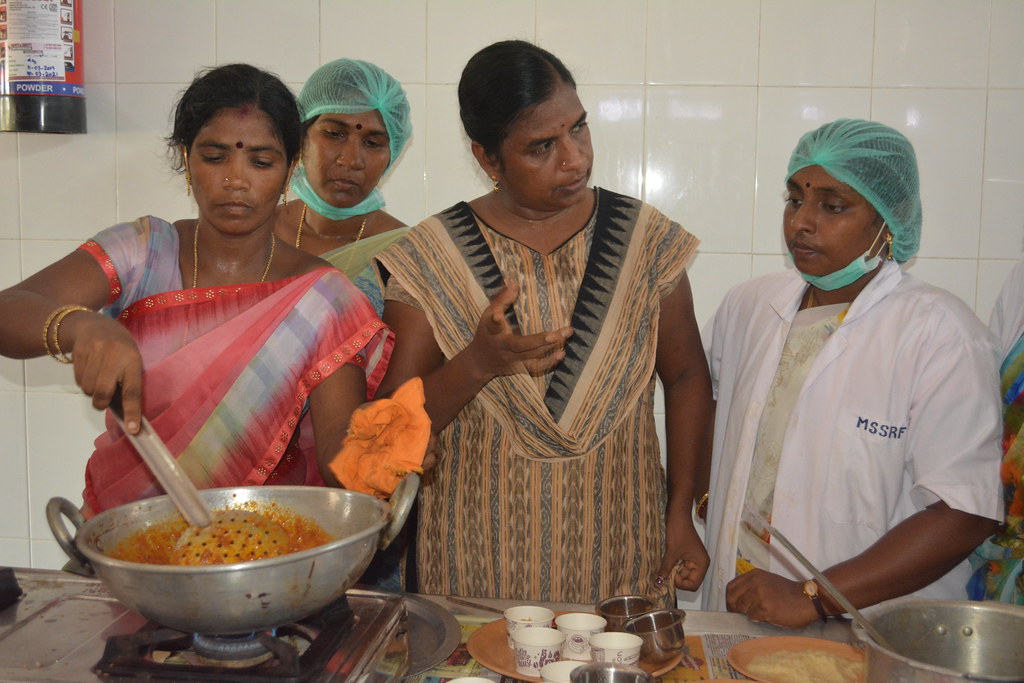 With women from fishing communities at a food training session on value-addition to fish products in Karaikal, Puducherry. Velvizhi has trained over 23,900 people, including 17,000 women, to pursue allied livelihood options, follow sustainable fishing practices, use technology to value-add at the local level, and improve linkages to the supply chain. Photo courtesy of MSSRF.

As a woman in STEM she is further marginalized and perceived as unfit for physically demanding projects, she explains. For instance, as the principal investigator for a Wave Rider Buoy project, with the Indian National Centre for Ocean Information Services (INCOIS), Velvizhi manages and gathers wave-height and other data from three buoys in the Bay of Bengal. When the buoy shifts from its position, she has to get into the sea, chase it using satellite data, and then reposition it. Often, women are excluded from such projects, she says. But after years of experience handling projects in the Bay of Bengal, entering rough seas isn’t daunting for her anymore.

The third barrier is proficiency in the English language, which has created a new caste of elites in the world’s largest English-speaking country. There is evidence that women and marginalized communities are discriminated against in India’s higher education space. Fluent English speakers in India are richer, more educated, and more likely to be upper caste, data shows.

Scholars from rural areas and lower castes who study in regional languages may have the knowledge and skills but aren’t able to communicate the same in English, Velvizhi explains. “They feel they are unable to achieve anything despite having an education. This creates an inferiority complex that can be overcome with support,” she says.

These experiences have shaped Velvizhi’s social calling. She is aware of the constructive role of her mentors at MSSRF, and now pays it forward to other children in her community. “I am a career counselor and guide in my village,” says Velvizhi, who wants to double down on helping others break the caste and gender barriers; she’s only too aware that role models are important.

“My knowledge of the seas comes from my father,” Velvizhi says proudly. “He has taught me the importance of sustainable and traditional fishing practices, but these are vanishing due to intensive mechanized fishing and climate change.”

India’s fishing zone is nearly as huge as it’s landmass — encompassing two million square kilometers of the Indian Ocean. It’s booming blue economy generates over four percent of the GDP and employs nearly 14.5 million people, a majority of them small-scale fishers. However, one event significantly altered the lives of fisherfolk in India.

“The reference point of Indian fisherfolk is ‘After-Tsunami’ and ‘Before-Tsunami,’” Velvizhi notes, recalling the Indian Ocean Tsunami that hit the east coast on December 26, 2004. Tidal waves hit Nagapattinam’s coastline, sweeping inland and killing over 6,000 people in the district alone. Thousands, including Velvizhi’s family, were displaced. She lost seven family members.

After the disaster, Velvizhi worked with a single-minded focus on communicating science and introducing user-friendly technology to the fishing communities. With INCOIS and cellular technology company Qualcomm, MSSRF launched the Fisher Friendly Mobile Application (FFMA) in 2007. The app helps fishermen to fish sustainably by guiding them with navigation, weather updates, and early warning systems.

Velvizhi and her team constantly work with fishers to identify their occupational needs. The app is available in nine languages spoken along seven coastal states. It provides real-time information on over 21 parameters, and has 75,000 downloads across 592 villages in 59 coastal districts. The app has received several awards, the most recent from the Global Resilience Partnership in London in 2019.

India’s east coast is highly vulnerable to natural disasters and climate change impacts, including tsunamis, sea-level rise, coastal flooding, storm surges, and cyclones. Experts have warned that an increase in global temperatures will result in severe cyclones in the north Indian Ocean with significant impact on lives and coastal livelihoods, as well as on ocean productivity, habitats, and biological processes.

“Most fishermen have a single-minded focus on the sea. We need to diversify their livelihood options,” Velvizhi points out. Three other MSSRF programs she manages span marine ecology and technology, and coastal livelihood projects.

Velvizhi has trained over 23,900 people, including 17,000 women, to pursue allied livelihood options, follow sustainable fishing practices, use technology to value-add at the local level, and improve linkages to the supply chain. These include workshops and demonstrations for women under the Post-Harvesting Technologies Programme, which focuses on the use of solar dryers or related technology to make value-added seafood. Meanwhile, men are trained in the international practices and guidelines for food production and safety outlined in the United Nations’ Food and Agriculture Organization’s Codex Alimentarius, or “Food Code.”

Under the Fisheries Improvement Programme, Velvizhi works on identifying species eligible for the Marine Steward Council certificate, the seafood equivalent to an organic certificate. This involves introducing effective management plans for particular species, improving local fisher’s understanding of resource utilization and protection, and stock assessment and availability. For instance, using the incorrect fishnets can lead to higher bycatch, and unintentional catch of juveniles or non-target species, causing severe damage to the marine ecosystem. Bycatch constitutes nearly 40 percent of the total global catch, according to some estimates. In some Indian states, studies show it can be over 60 percent.

In July, Velvizhi and her team will spend a few days on a trawler testing different by-catch reduction technologies targeted at excluding turtles or other species. Based on their findings, ideal practices will be recommended to the community and the government.

With the Artificial Reefs project, she works with communities to lay man-made reefs, which boosts marine ecology, while encouraging communities to protect common property resources.

“Interacting and working with the community gives me a lot of energy. The aim is to promote sustainable fisheries while focusing on livelihood and resource management,” says Velvizhi. “I work on science for society. I want to make fisherfolks’ lives better.”

Mahima A. Jain is an independent journalist covering environment, gender, culture and socio-economic issues. She is based in Bengaluru, India and tweets @theplainjain.

In Big Win for Wildlife, California Curbs Use of Dangerous Rat Poisons

After 12 Years, We Finally Got a Climate Question at the Debate. Glory Be!

Sadly, the bar for any discussion one can expect on the climate crisis on the national stage is pretty low. And it showed.

Designation can help open a dialogue about how our relationship with the environment must evolve in the light of climate change, says Ohlone leader Corrina Gould.