The Himalayan region is home to one the last remaining intact temperate rainforest landscapes in the world.
Rishika Pardikar

In June 2020, a team of herpetologists from the Wildlife Institute of India (WII) reported the rediscovery of the rare keelback snake (Hebius pealii) in the state of Arunachal Pradesh in Northeastern India. The snake was first discovered 129 years ago by a British tea planter, who trapped a snake and sent it to a museum to be formally recorded as a new species. But the keelback had never been seen in the wild since. Until now.

That’s not all the team discovered. “We also found a new cicada species during this same expedition,” says Dhritiman Mukherjee, a conservation photographer and part of the team. Then, a few days after the keelback rediscovery, entomologists discovered two new species of butterflies in the same state, adding to India’s list of 1,327 butterflies.

Arunachal Pradesh is a mountainous and forested state. The Eastern Himalaya extends through the region, and scientists and conservationists note that the evergreen forests in the range’s foothills are among the most biodiverse areas in India. The keelback was discovered in the Poba Reserve Forest near the border with the state of Assam during a month-long zoological expedition of the region. 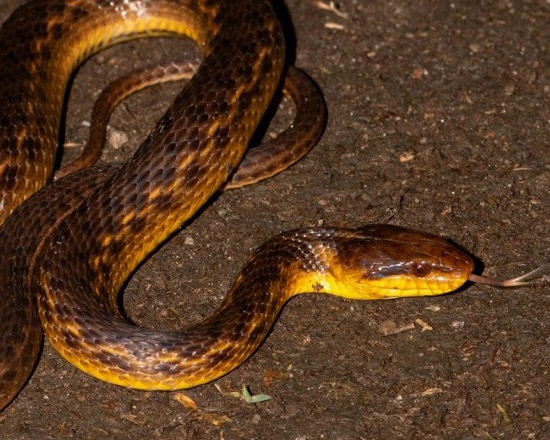 The rare keelback snake (Hebius pealii) was first discovered 129 years ago by a British tea planter and had never been seen in the wild again until last year. Photo by Abhijit Das.

But ramping up hydropower in Arunachal Pradesh would risk plant and animal species, particularly — as the recent rediscovery of the keelback snake shows — species that haven’t even been fully studied yet.

In late 2019, WII prepared a Wildlife Conservation Plan to assess the impact of a proposed hydropower project called the 3097 MW Etalin Hydro Electric Project (EHEP). This project is slated to be developed in Arunachal Pradesh’s Dibang Valley, a biodiversity hotspot with numerous endemic species.

Northeastern India is also a favored site for generating hydropower. In fact, the chief minister of Arunachal Pradesh Pema Khandu repeatedly says that the state has the capacity to generate 50,000 megawatts of hydropower — and that hydropower is the state’s future.

“In 2015 I photographed a fly around [the proposed site for the] Etalin project that is so bizarre, experts still can’t identify it up to its genus,” says Chintan Sheth, an independent researcher who works on subjects ranging from herpetology and mammalogy to natural hazards in the Eastern Himalaya. He added that it’s very likely that there are “hundreds of such species that are at risk of being lost without us even knowing their ecological role and uniqueness.”

The WII report was prepared by recommendation from India’s Ministry of Environment to conduct a multi-season biodiversity assessment as part of the process to divert forestland for EHEP. But the report has “considerable deficiencies and scientific biases,” scientists and researchers pointed out in a review of the report published last May. For one, the study took only five months — too short a time to represent all wildlife migrations and breeding seasons in the area. Sheth, the lead author of the review, says that the report fails to show just how much EHEP risks yet-to-be-identified biodiversity.

Earth Island Journal reached out to VB Mathur, director of WII and project lead for the report, as well as GS Rawat and Gopi GV, project coordinators, regarding their response to Sheth’s review and received no response.

Mountain regions host Earth’s richest biodiversity. Though they cover only 25 percent of Earth’s land area, they host more than 85 percent of the world’s species of amphibians, birds, and mammals. By even this measure, Northeast India stands out.

“It has the last remaining intact temperate rainforest landscapes anywhere in the world,” Sheth says. Several thousand square kilometers of such forest have “never been modified, perhaps never even visited by humans,” he adds. This, in combination with a terrain that makes fieldwork challenging, is perhaps a reason why new species are still being described.

“Wildlife is nonrenewable,” says Mukherjee, the photographer, adding that the value of wildlife species, including those still undiscovered, far exceeds the short term economic benefits that hydropower could bring.

According to Sheth, hydropower projects like EHEP can cause ripple effects downstream by drastically altering flow rates of rivers and therefore causing extensive damage to freshwater and riparian ecosystems. Reduced flow can lead to “altered spawning abilities for fish, drying up of riparian vegetation and loss of species along the banks, and sediment trapping that prevents the deposition of nutrient-rich sediments in the floodplain agrarian geography,” he explains. The extent of such impacts could extend several hundred kilometers.

Sheth’s review also calls for a reexamination of the herbarium species collected by WII during fieldwork because many of these unidentified specimens “could turn out to be new to science.” The review added that EHEP could put the yet-to-be-identified botanical diversity at risk and that WII’s conservation plan “does not do an adequate job of identifying these potential impacts.”

Same goes for avifauna too, the review points out, which are “entirely dependent on the rivers and riverbank habitat of Dibang and its tributaries.” Some recent new bird species for India from the region are the black-headed greenfinch (Chloris ambigua), Elliot’s laughingthrush (Trochalopteron elliotii), and the chestnut-flanked white-eye (Zosterops erythropleurus).

Biodiversity in Dibang Valley is also of great value to local forest-dwelling communities. Sheth notes that the presence of primary forests around swidden farms “confer advantages to people and native biodiversity in terms of recovery of fallow land, pollination, predation, seed banks, and grazing land.”

So with the construction and operation of EHEP, “will we observe a collapse of the local livelihood along with ecosystem collapse?” Sheth asks.

In April 2020, the Forest Advisory Committee (FAC) of the Environment Ministry met to deliberate the Etalin project. In the meeting, the committee sought views of the Power Ministry with respect to three issues: the project’s delay by at least six years and ensuing changes in the country’s energy plans during this time; the high tariff structure; and the reprioritization of certain proposed hydropower projects based on ecological impact.

According to the response received in September 2020 regarding a Right to Information request filed by this reporter, the Power Ministry had not yet submitted its comments to the Environment Ministry.

If EHEP is accorded clearance by FAC, there’s no doubt that local ecology would suffer adverse consequences, including unfathomable and irreversible losses beyond our knowledge.