It may seem bizarre to talk about freedom in the context of food animals or to suggest that certain “more humane” alterations to their captive environment, like Temple Grandin’s stairway to heaven, could possibly make them happy. Yet it is worthwhile exploring freedom in this realm, as surreal as it might seem. We’ll see, for starters, that violations of the Five Freedoms are rampant. 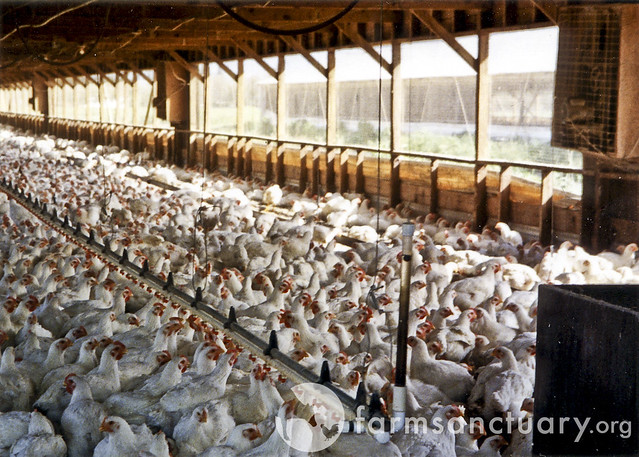 photo Farm SanctuaryChickens being raised for meat. When densely housed, hens peck at each other and pull out feathers.

The Five Freedoms are a set of guiding welfare principles drawn up in 1965 in the Brambell Report. These include freedom from fear, hunger, distress, and pain, and the freedom to engage in at least some species-specific behavior. (For example, birds must be able to stretch their wings) Adherence to these animal welfare goals is not enforced and violations do not incur punishment but are, rather, fully accepted as the cost of doing business. Additionally, because the Five Freedoms are typically understood, as by the Brambell Report, as unachievable ideals, failure to achieve them is viewed as inevitable. What happens, then, is that welfare science focuses on minor improvements to caging systems or slaughterhouse design, without really examining the serious deprivations and constraints to freedom that our food-production systems, and our eating habits, impose on sentient creatures. We may proclaim that we should have the freedom to eat whatever we want, but this proclamation sounds mighty selfish in the context of a discussion of how profoundly we violate animals destined for our stomachs.

Animals in intensive-farming systems have essentially no freedom. They are confined to small cages or crates, or else they are packed into a large space with so many others of their kind that physical movement is highly constrained. Their biological development is controlled by us: they are genetically manipulated to develop in certain ways (nearly always physically deforming and painful) and given highly processed and regularized “feed” (to be distinguished from “food”) to promote quick growth and fatten them up. They certainly don’t have freedom to live a natural lifespan, as nearly all food animals are slaughtered while young, which may be a blessing.

In addition to physical constraints, food animals are unable, for a variety of reasons, to engage in normal behaviors, as individuals and as social beings. They have little to no control over social interactions and attachments. Either they are isolated, or they are housed in overcrowded groups that don’t allow normal social interactions to take place and subject them to increased aggression from their fellow inmates.

When densely housed, hens peck at each other and pull out feathers, while if allowed normal interactions they would typically only peck to maintain a social hierarchy. They rarely have a choice about where, when, whether, and with whom to reproduce, if at all. Most are denied the pleasure of sex, since the majority of breeding is accomplished artificially, and the parent-offspring bond is almost always broken, causing suffering for mother and baby. Maternal behaviors are thwarted. For example, dairy cows will bellow for their calves for days when separated, unable to nurse or lick their babies, and young animals cannot frolic and play.

The late Chris Evans, who taught at Macquarie University in Sydney, Australia, spent years studying chicken behavior and cognition with his wife, Linda. “Chickens,” he noted, “exist in stable social groups. They can recognize each other by their facial features. They have 24 distinct cries that communicate a wealth of information to one other, including separate alarm calls . . . They are good at solving problems. As a trick at conferences I sometimes list these attributes, without mentioning chickens, and people think I’m talking about monkeys.”

Naturalist Sy Montgomery has also spent a lot of time getting to know chickens, and she is continuously amazed at their intelligence and personality. In addition to those mentioned by Evans, chickens have a number of other skills that may be surprising to those who haven’t known any chickens personally. For example, they have the capacity for “object permanence,” understanding that an object, when taken away or hidden, still exists. Chickens also, Montgomery learned, may use special “names” for the special humans in their life, according to a conversation Montgomery had with Melissa Caughey, author of A Kid’s Guide to Keeping Chickens. Observing her flock of 10 at her chicken compound, Caughey discovered that her chickens had invented a special name for her, which sounds like “ba-Ba-BA-BAA.”

“I was out there one morning, throwing scratch into the run,” she told me, when she noticed her eldest, 6-year-old Oyster Cracker, “was talking to me in a different voice, one I’d never heard before.” Oyster Cracker wasn’t just uttering the greeting, “Brup? Brup?,” a chicken hello. She certainly wasn’t saying “bwah, bwah, bwah.” (That’s chicken for “I’m about to lay an egg.” But Oyster Cracker had long since entered what Caughey calls “henopause”). Oyster Cracker was clearly saying, with increasing emphasis and tempo until the final, higher note, like trumpet fanfare, “ba-Ba-BA-BAA!”

“It was quite regal-sounding,” Caughey said, “almost like announcing the arrival of the Queen!” And then Caughey noticed other hens would say it, too — only when they first caught sight of her. Hence her conclusion: “When they see me, they call my name.”

Despite their possession of smarts and personality, chickens are routinely treated as though they have no brains and no feelings. Consider a few of the welfare problems faced by these remarkable birds. About 90 percent of commercially sold eggs come from hens housed in battery cages. In this system of “husbandry,” each bird is confined to a wire cage so small they often cannot even fully extend their wings. Imagine having to live in a space so small that you could not straighten your legs. Your muscles would atrophy and you would be in constant pain. This is what happens to the hens. They have very little mobility or exercise, and they cannot forage, preen, or dust bathe, all behaviors that they are highly motivated to perform. Chicken feet are not designed for wire mesh; they evolved to perch on branches. In wire cages, their feet lose bone volume and strength, and they develop abnormal thickening of their toe pads, leading to a near-constant state of pain, a clear violation of the second and third of the Five Freedoms.

The fourth freedom is also routinely disregarded. Species-typical social behavior is totally ignored and disrupted; there are high levels of aggression, which is why de-beaking is “necessary;” subordinate hens cannot escape to a perch, as they might in a free-range setting. Forced molting (to encourage egg production) is induced by stressing the hens, either by depriving them of sleep, manipulating light/dark cycles, or by restricting food. About once a year, the entire population of laying hens is slaughtered and replaced. The so-called broilers, male chickens who will be slaughtered for their flesh, are physical mutants. They are genetically bred to grow huge muscles, especially in the breast, which their skeletal structure cannot support. They become crippled, and often completely immobile. Research has found lameness in 90 percent of broilers. Regrettably, humane slaughter laws don’t apply to chickens or other poultry, even though they represent more than 98 percent of slaughtered land animals in the United States. Slaughter methods are often obscenely cruel.

Chickens, like other animals, have behavioral needs. They have internally motivated behaviors they will experience regardless of where they are kept. This is one of the most empirically solid assumptions of animal welfare science, straight from the evolutionary-biology textbooks. It is also one of the keys to understanding why intensive-farming practices are so problematic for animals. Chickens, for example, will be motivated to nest, dust bathe, preen, and establish social hierarchies, no matter what environment they are placed in. They will have these behavioral needs even when they are housed in cages, even when the natural stimuli (e.g., a natural substrate to scratch out a nest or dust to bathe their feathers) are absent. They have an urge to scratch the ground in search of food, and will have the urge to forage even if they have a trough full of food.

When chickens are kept in environments that inhibit or impair their natural behaviors, which they almost universally are on factory farms, they suffer physically and especially psychologically. This is why the Five Freedoms can be misleading: they suggest that if you provide animals with food, water, shelter, and some simulacrum of species-typical behavior, you have taken care of their needs. But an animal provided with food, water, and shelter can still suffer distress, a violation of the fifth freedom. Indeed, stereotypic behaviors, which are abnormal repetitive behaviors and a sign of psychological distress, are endemic among farm animals, a clear sign that all is not well.

Adapted from The Animals’ Agenda: Freedom, Compassion, and Coexistence in the Human Age by Marc Bekoff and Jessica Pierce, Beacon Press, 2017. Reprinted with Permission from Beacon Press.