Grain by Grain, Truck by Truck: How Myanmar Is Losing its Beaches

Around every corner waits a new truck. Workers dig their shovels into the powdery white sand of Myanmar’s Ngapali beach, the country’s top seaside destination, and lift it onto the truck beds. Vast craters dot the coastline. Many are bigger than the swimming pools of the nearby luxury hotels. 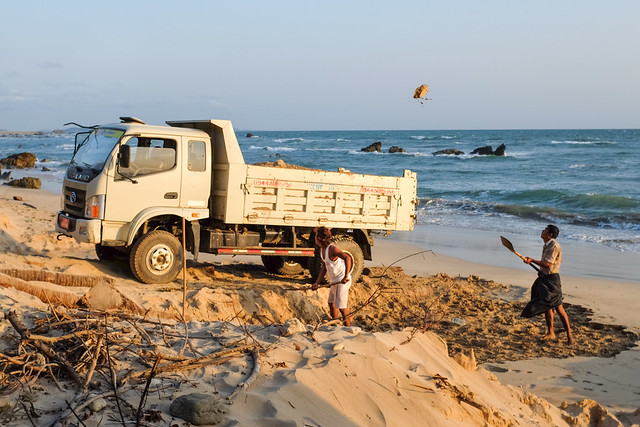 As a main ingredient of cement, sand is a vital component in almost any construction, whether that of a skyscraper or a middle-class home, a countryside road or a vast bridge. But the resource is finite, and as construction booms in Myanmar and across Asia, the industry has fuelled the illegal mining of sand — with harsh implications for Myanmar’s environment and burgeoning tourism industry.

Myanmar was ruled by a brutal military junta for decades. Few tourists ventured to Southeast Asia’s most impoverished nation, and even fewer made it to Ngapali, nestled in the remote Rakhine state in western Myanmar. Up until 2011, fewer than 1 million international visitors (including business travelers and tourists) arrived in Myanmar each year. Then, the junta opened up the country and began to make way for a civilian government. International arrivals are now estimated around 5 million annually.

Ngapali is still the secluded, pristine paradise for which Western tourists yearn. The beaches are white, the seafood fresh, and the coconuts meaty. Clamoring beach vendors are as hard to come by as a cell phone signal. But with the arrival of international tourism, hotel numbers have more than doubled since 2012. Construction is booming, and sand, mostly taken straight from the local beaches, is urgently needed. The sand on Ngapali’s beach has become a free-for-all.

Few have thought about the implications of mining beach sand. But Oliver E. Soe Thet, a rotund German who’s adopted a Burmese name and who used to serve as an environmental advisor to the junta government, is fully aware of the environmental toll. He now documents the depletion of the beach in Ngapali.

The waterline has already started to recede due to the disappearing sand, says Thet. In the evenings, the high tide comes in closer than before, causing erosion and decreasing protection from the storm surges common to this area. Moreover, as the high tide mark rises and more seawater seeps into the water table, subsistence farmland could become too salty to cultivate.

“Sometimes you see 10 trucks here at a time, and they are just shoveling sand onto them until they are full,” Thet says.

Several walls built to protect Ngapali from storms and floods that have lasted for years have now foundered — a sign that the sand they were built on is disappearing.

Though most of the sand is believed to feed local construction, some say Ngapali’s sand is also taken to the next largest town, where it is sold to middlemen — but mostly, workers shrugged their shoulders when asked about the sand. Nobody I interviewed seemed to know exactly where the truckloads of sand end up.

By nature, the trade is opaque because regulations are lacking, says Pascal Peduzzi, the head of the UN Environmental Program’s Global Change and Vulnerability Unit and one of world’s few sand trade experts.

“This is a fairly recent and emerging issue. Policymakers are not yet aware of this,” Peduzzi says, speaking of the sand trade. “Especially in developing countries, this has led to indiscriminate mining.”

After several complaints from hotel owners, Myanmar reiterated a ban on the “digging of sand at the beach” in 2014, but the ban was never enforced.

In a letter to Myanmar’s vice president in April, the Myanmar Centre for Responsible Business (MCRB) said that the practice still hadn’t stopped. The opposite: According to observations, sand mining “dramatically increased” in 2015, the letter reads.

Demand for sand isn’t just growing in Ngapali, but across the globe. According to the UN, sand and gravel are the most heavily mined solid material worldwide — at least 40 billion tons are needed each year for construction.

But according to Peduzzi, the issue of illegal sand mining is particularly pressing in Asia. “Asia is booming and absorbs most of the raw material worldwide,” he says.

The island state of Singapore, for example, has grown in area by 22 percent since 1965. Some of Singapore’s epochal landmarks, like the Marina Bay Sands casino hotel, are built on sand. In a white paper, Singapore estimates that it will need to expand by another 22 square miles in the next 15 years to keep up with a growing population.

Sand used in Singapore is already coming from Myanmar. In 2010, the year the military junta started to loosen its grip on the country and opened its borders to international trade, Myanmar reported that it exported 2.2 billion pounds of sand, worth US$5.26 million — all destined for Singapore. The figure tripled to US$15.11 million in 2014. Myanmar doesn’t report where the exported sand is being mined.

The true figures could be much higher, as illegally mined and shipped sand isn’t reported.

“It is very difficult to quantify the illegal trade, which by definition is not reported,” Peduzzi says.

What’s certain, says Bowmann, is that sand will be a more and more important commodity in the future, simply due to its finiteness.

“The problem is, the government is not thinking about sand in terms of its commercial value yet. There is no legal framework in Myanmar, although it has some of the largest sand resources in Southeast Asia,” she says, adding that sand is not just mined in Ngapali, but farther south too, as well as in rivers.

The junta hasn’t done much to regulate the trade. Recently though, local authorities in Ngapali sided with environmentalists, and ordered police to help enforce the ban, according to Thet. The move came just days before the curtain fell for the junta, and the National League for Democracy, headed by Aung San Suu Kyi, resumed leadership on February 1.

The NLD is inheriting a host of issues. Police and security are still controlled by the generals. A quarter of the country’s population lives below the poverty line. Corruption is ripe. There’s hardly any modern infrastructure. Ethnic violence between Buddhists and Muslims, which has led to violent attacks and killings, continues to pose challenges.

He figures the best he can do is raise awareness among locals. And for that, the strongest message he can send is not one surrounding the environmental concern, but one emphasizing long-term economic impacts of sand mining: If the beach loses its beautiful sand, tourism will falter.

“No sand, no tourists,” reads the simple message on local posters.

And yet it’s an uphill battle. Next to the poster, tire tracks lead to a small path down the beach. There, workers are hoisting sand.

If nothing is done to stop them, the sand will be gone in two years’ time, Thet says. But the recent support by the local government has made him more hopeful, and is at least a sign that the his campaign has drawn attention.

“If we want a sand beach in the future, we will need everyone to be on board,” he says.