“Come out to Rockaway Beach and walk into Jetty Creek and you’ll feel that sense of outrage,” says Kate Taylor who lives in this small northern Oregon coastal town where she and her boyfriend run a fishing and travel guide business. Shortly after they’d settled into their new home there, the couple received a notice saying their water didn’t meet US Environmental Protection Agency water quality standards. Why? Because its source, the Jetty Creek watershed – water that runs off the steep forest slopes above the town – has been 80 percent clearcut and repeatedly sprayed with herbicides. The water requires extensive treatment and that has resulted in toxic levels of decontamination byproducts. 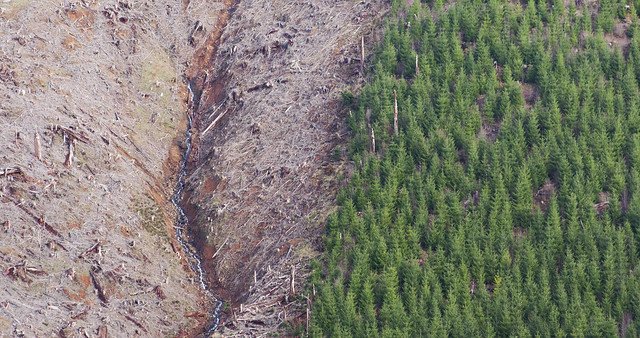 Photo by Shane Anderson The Jetty Creek watershed has been 80 percent clearcut.

Taylor spoke at a screening of Behind the Emerald Curtain, a new documentary film by the Oregon-based conservation group Pacific Rivers . The film – filled with footage of clearcuts and aerial spraying – takes aim at the Oregon Forest Practices Act, the state law that regulates logging on private lands. “For a lot of people that’s kind of an obscure policy,” explained Pacific Rivers executive director John Kober at a screening of the film in Portland, Oregon last week. But, he says, the policy has allowed clear-cutting and herbicide spraying in Jetty Creek’s forests and on private forest lands up as well as down the Oregon coast and around the state.

“The whole message here is that our forests need to protect water resources in a more functional way,” said Kober. “We will let you judge [from the film] whether they do or not. We would argue that they do not.”

Since the 1990s, when the Northwest Forest Plan – that governs timber harvest on federal land in Oregon – went into effect, private forestland has become increasingly important to timber companies operating in Oregon. While commercial logging on Oregon’s extensive federal forestlands has dropped by about 90 percent in the past two decades, the level of timber harvest on private lands has remained remarkably steady. It now accounts for more than 75 percent of all logging activity in Oregon.

Behind the Emerald Curtain focuses on Oregon’s coastal forests — like those above Rockaway Beach — where trees typically grow year round, thanks to heavy moisture from rain and fog and lack of hard frost. Here the logging has been intensive, with massive clearcuts that expose sensitive streams to heat and sediment, immediately impacting the region’s iconic indicators of ecosystem health: salmon and steelhead trout. Most of the species of these fish are now listed under the Endangered Species Act. 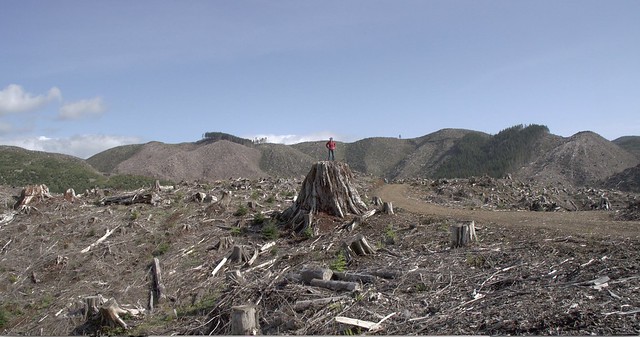 On private lands there are no required buffers or setbacks for logging near streams that don’t have fish populations. But conservationists say such streams are essential for healthy watersheds. This logging also leaves steep slopes vulnerable to landslides. These practices, the film notes, are “putting at risk the health and wealth of communities that depend on this salmon-based ecosystem.”

“We’re not saying we shouldn’t have industrial logging. We don’t want to shut down the industry,” Kober told Earth Island Journal. But, he says, Oregon’s regulations “should be at least as protective as those in Washington and California. Both are better than Oregon on buffers around rivers and streams, on use of herbicides and cutting on steep slopes.”

Current industrial private forestry practices include spraying herbicides to destroy plants that might compete with new fir saplings that are planted the replace logged trees. “The legal use of herbicides protects young forests and promotes healthy forest growth,” Paul Barnum executive director of Oregon Forest Resources Institute, the state-funded organization that speaks for the timber industry, told Earth Island Journal via email. “Herbicide and pesticide use by the agriculture and forestry sectors is strictly regulated, as it should be, and lawbreakers need to be held accountable,” wrote Barnum explaining that data from 2013 “shows 96.5 landowner compliance with rule regard roads, harvest and riparian areas.”

Conservationists, however, say that it isn’t really necessary to kill off competing plants.

Ordinarily, trees will grow without destroying this understory vegetation but it will take longer and timber companies are cutting trees earlier in their growth cycle than they used to, explains Beyond Toxics executive director Lisa Arkin.

Oregon’s private forest lands regulations do not require a buffer zone for aerial application of pesticides around schools or other specific “structures” such as homes or healthcare facilities. The film features testimony from community members affected by this herbicide spraying. To be given advance notice of spraying, residents must pay a $25 fee. Otherwise, says Rockaway Beach resident Nancy Webster, “you just listen for the helicopters.”

The tree felling and herbicides have taken a heavy toll on water quality – not only for fish and other forest species – but also for the communities, particularly those up and down the coast that, like Rockway Beach, depend on these forest watersheds for drinking water. The herbicide spraying has also sickened forestry workers. These issues have been extensively reported on by regional news media but Behind the Emerald Curtain zooms in on the state law that makes these practices legal – with the aim of galvanizing public opinion and action.

The film’s footage is stark and dramatic, taking viewers, “behind locked gates” and “beyond the beauty strip” – the curtain of tall trees left along roadsides to mask the clearcuts that lie beyond. Shot after shot shows acres of denuded hillsides dotted with stumps. We hear from coastal community residents about extensive logging in sensitive wetlands and see helicopters unleashing spray as they zoom over hillsides.

As one coastal resident says in the film: “Timber companies are not breaking the law. This is what the law in Oregon says they can do.”

In the film, economist Ernie Niemi makes the argument that not only are these practices bad for the environment, they are also bad for the economy. The vast majority of trees cut are now exported – eliminating local jobs and income from processing those logs. According to Niemi, back in the 1980s Oregon forest jobs commanded a significant wage premium, about, 30 to 40 percent over the state average. Now those jobs number but a small fraction of what they once were (due more to changes in the industry than to timber harvest levels) and what they pay are at or below state average wages. Niemi also argues that Oregon’s forests are more valuable left standing because of what they provide in ecosystem services – water quality protection, species diversity, and retaining atmospheric carbon.

Behind the Emerald Curtain also features private forest owner Peter Hayes, whose family timber company Hyla Woods, cuts its trees in ways that maintain as much forest diversity as possible in order to preserve ecosystem health. The process is slower and more painstaking than methods used by corporate timber companies, which as the film points out, aim to maximize quarterly profits. The point is to show that timber harvest can be done in ways that maintain forest and human community health.

“My intention in making the film was not to be anti-timber industry,” producer Shane Anderson said at the screening. “I think we can do better. I think we can have wood and live in a world with healthy rivers.”

Not surprisingly, the Oregon Forest Resources Institute takes issue with the film’s premise. “Everyone already knows that clearcuts look bad after harvest, but they should also know that replanting is Oregon law. The film takes issue with the Oregon Forest Practices Act. Our laws are both strong and fair, protecting natural resources and forest management,” OFRI executive director Paul Barnum said via email.

Pacific Rivers has also launched a complementary grassroots campaign aimed at making the Oregon Forest Practices Act more protective of forest health and water quality. The Oregon Board of Forestry will consider proposals for new stream buffers on November 5,, but activists expect it will take additional efforts to reform the law to the extent they think necessary.

Oregon, said Anderson, “is perceived as being this very green, progressive state but some of our laws are actually quite regressive.”