High up in the Himalayas, Villagers Live Under the Shadow of An Unpredictable Lake

As glacial lakes around the world grow bigger and deeper, high altitude communities are increasingly at risk from catastrophic flooding
Daniel Grossman

Chorabjor stared at me with gimlet eyes. Why had I come?, he asked through a translator. To learn about Lake Shako Cho, I replied. He signaled me to move closer. I sat down at his side on a low bench covered by a yak hair carpet. A woman brought over a tub of biscuits and placed them in front of us. Chorabjor (who, by local custom, goes by only one name) was until recently the headman, or Pipon, the most powerful man, of Lachen, a village of about 1,000 people, in the northeastern Indian state of Sikkim, near the Tibetan border. He’s “above the law,” my guide had told me. “The police can’t arrest anyone without his permission.” Such a man, I thought, would surely know about threats to the safety of this region. 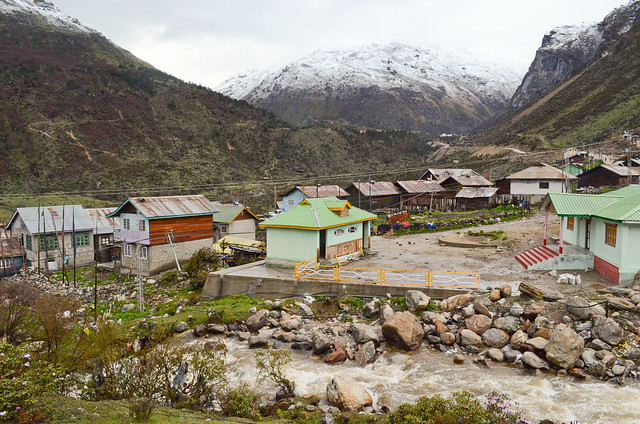 All photos by Dan GrossmanThangu, a small village of about 100 homes in the northeastern Indian state of Sikkim, is perched precariously below Lake Shako Cho, a glacial lake which is at high risk of breaching.

Lake Shako Cho, upstream from Lachen, is growing, said Chorabjor. The natural gravel embankment holding the contents inside could burst at any time, releasing a tidal wave of water. Thangu, a village of about 100 homes immediately below the lake, would be obliterated. The ensuing flood could also demolish houses here, 11 miles farther downstream, especially those near to the unstable bluffs of the lake-fed river that runs just east of town.

I’d heard of Shako Cho from Christian Huggel, a Swiss geographer who has studied the recession of glaciers in the Himalayas, the Andes and elsewhere. Huggel had published a study showing that this particular lake was at high risk of causing a “GLOF,” or glacial lake outburst flood – a type of flood that occurs when a natural dam holding in a glacial lake fails. Climate change has drastically increased the likelihood of GLOFs, which pose a major risk to mountain communities living near or downhill from glacial lakes.

We are already well aware that global warming is decimating mountain glaciers almost everywhere on Earth. In Peru, glaciers of the Cordillera Blanca have shrunk by 20-30 percent since 1970. Today they’re wasting away by 3 percent per year. In Switzerland, the Alps melted by 12 percent between 1999 and 2008. They lost 3 percent of their ice in 2003. In India, Himalayan glaciers have lost about 10 percent of their volume in the past four decades. The rate of retreat has doubled since the 1970s. But the threat posed by the growing number of glacial lakes around the world isn’t as well known. 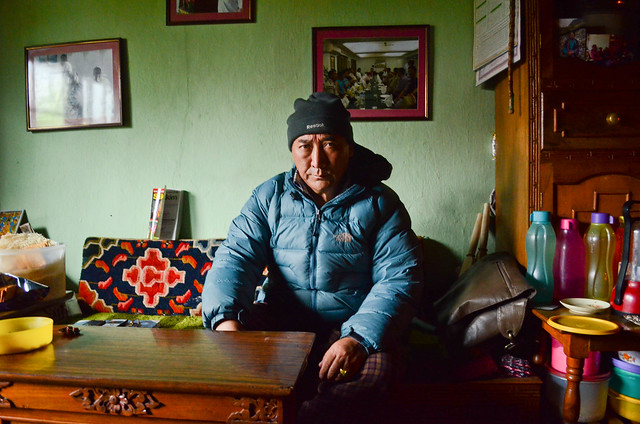 Chorbajor, the former headman of Lachen village, which lies further downstream from Thangu, says he has repeatedly warned people of Thangu to move away from the river, but they don’t listen.

Just 150 years ago, before global warming ended a 400-year-long cold spell called the Little Ice Age, many glaciers were growing. Tongues of ice advanced down from mountaintops, where glaciers are born, into lowland valleys, like hot fudge on a sundae. An advancing glacier bulldozes boulders and gravel into a linear mound – often tens of feet high and miles long – wrapped around the tongue’s tip. When warm temperatures drive this process in reverse, as is happening around the globe today, the ice tongue retreats. The mound remains stranded behind, like a sinuous stonewall abandoned by a dead civilization. Often the wall dams up a valley that becomes a glacier lake, filled with water from melting ice.

In 2012 Huggel and his colleagues Raphael Worni and Markus Stoffel published a census of India’s glacial lakes. With the retreat of mountain ice, glacial lakes around the world are growing bigger and deeper. New lakes are appearing as well. But few people ever visit these inaccessible, high-altitude water bodies. Some communities aren’t even aware that a lake is perched precariously in the mountains above them.

Huggel’s team catalogued 251 such lakes in India by painstakingly scanning satellite photos. They estimated the likelihood that each lake’s natural dam could burst, and traced the path of the flood that would ensue. They identified a dozen lakes with embankments at high risk of bursting and communities in the path of floodwaters. Among the most worrisome lakes they found was Shako Cho (also known as Shoka Chho).

I’d tried to see Shako Cho myself two days before I’d met Chorabjor. It was pouring and freezing cold when I’d arrived in Thangu, the town nearest the lake. I’d stopped in at a teahouse, hoping to wait out the storm. The shopkeeper lit a kerosene stove and put milk on to boil. She put a small plastic container under a trickle of water leaking through the roof next to my seat. Vaibhav Kaul, a geographer who’d joined me, asked her when the weather might improve. A cold rain had been falling hard for two days, a weird wet spell at this time of year, before the arrival of the monsoon. “Nobody can predict,” she said with a shrug. Did Lake Shako Cho worry her? A stream fed by water seeping through the lake’s natural dam leapt over boulders just few steps from her door. It’s a good lake that won’t burst, she said. “I hope it won’t burst,” she added a moment later.

Despite the storm, we tried ascending to Shako Cho, which is seven miles from, and 4,500 feet above, Thangu. The skies cleared briefly, then the downpour resumed. After two hours of climbing we retreated to a stone hut hard by the trail. Two brothers there, yak shepherds, brewed us milk tea served in tin mugs. We warmed our stiff fingers over a fire of twigs. But our sopping pants and jackets refused to dry. Reluctantly, we retreated to Thangu and, from there, by car to Lachen. 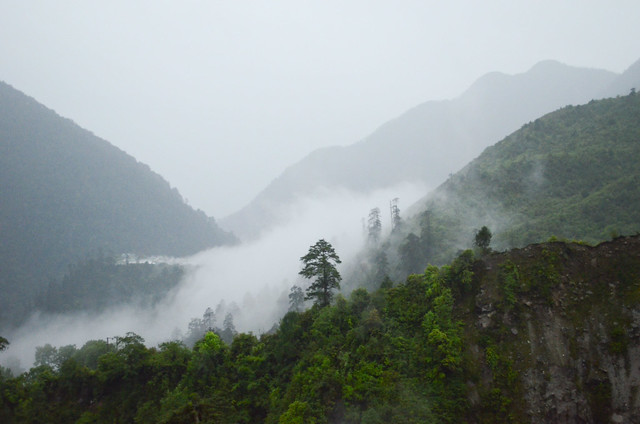 Mount Kangchengyao, a massive ice-covered pyramid of dark grey stone looms directly above Lake Shako Cho. An avalanche on the mountain’s steep south face could crash into the lake, whipping up a multistory-high wave that could punch a hole in the natural dam holding the water back. This scenario seems farfetched, unless you’ve heard of Lake Palcacocha in the Cordillera Blanca range of Peru. Early in the morning of December 13, 1941, a great block of ice broke off a glacier and tumbled into Lake Palcacocha. The impact created a mammoth wave that obliterated the natural embankment that had bottled up the lake. About 3 billion gallons of water and glacial ice poured out almost instantaneously and raced into a tight valley. The outburst gathered up huge volumes of dirt and rock and everything else in its path as it tore downhill. About 15 minutes later, thick as wet concrete, the river of debris crushed the city of Hauraz, smothering thousands of people.

To prevent disasters like this, existing and emerging glacial lakes need to be monitored regularly. The riskiest lakes could be drained. Alarm systems could be constructed for ordering emergency evacuations. The United Nation Environmental Programme is taking steps to build a system to monitor GLOF hazards and to reduce the risk of outburst.

Huggel, who has also studied Lake Palcacocha, says that if Lake Shako Cho’s dam bursts, a torrent as large as that of Niagara Falls would strike Thangu and wash away many of its buildings. About 10 minutes later the flood would hit the town of Yathang. He didn’t extend his study farther downstream, though the flood would arrive in Lachen about 30 minutes later and continue farther downstream. Huggels says that although his study hypothesized an avalanche, other events could set off an outburst. An earthquake, like the one that rocked Sikkim in August 2014, could trigger a destabilizing landslide. If the lake continues to fill up, the dam might collapse under the weight of the extra water.

Chorabjor told me that when he was Pipon he warned Thangu’s residents to move away from the river. But they didn’t listen. They prefer homes and shops near the road – and the river – where tourists shop for food and handicrafts, and sometimes spend a night. The people here – who practice a mixture of Buddhism and nature worship, and hold mountains, forests and lakes such as Shako Cho, sacred – hope that their guardian deities will protect them.

The skies darkened as Chorabjor talked. The power had failed. A family member, or perhaps a servant, lit candles. Clouds dropped more water. Thunder rumbled. After days of relentless showers I’d ceased to notice. Then an unusually sharp clap rang out. Somebody yelled something in Sikkimese. “A landslide!,” said my translator, leaping to her feet. I followed her onto an adjoining balcony overlooking the river. A half a mile across the valley a boiling brown torrent had cleared a swath of forest. Mud and water rolling boulders and ripping down trees raised a furious din.

Chorabjor said that during thunderstorms like this, Thangu’s people avoid the river, but they always returned. “There’s only so much we can do,” he said. “It’s up to the people to listen”

In the past year, the state of Sikkim has started to take action. It began monitoring Lake Shako Cho with an electronic gauge. Officials will be alerted if the water level rises, further stressing the dam. No efforts have been made to drain the lake, as Peru, Bhutan, and other countries have done with dangerous glacier lakes.

Reporting for this article was made possible by grants from the Society for Environmental Journalists and the Grant Programme for Journalists of the Himalayan Climate Change Adaptation Programme (HICAP). HICAP is implemented jointly by ICIMOD, CICERO and GRID-Arendal in collaboration with local partners, and is funded by the Ministry of Foreign Affairs, Norway and Swedish International Development Agency.