Head in the Clouds

I grew up among the redwoods. My parents’ house is nestled in a unique Bay Area neighborhood built among these giant trees. Redwood roots burst through the concrete roads and sidewalks, and branches shade the narrow streets that have been paved around their trunks. 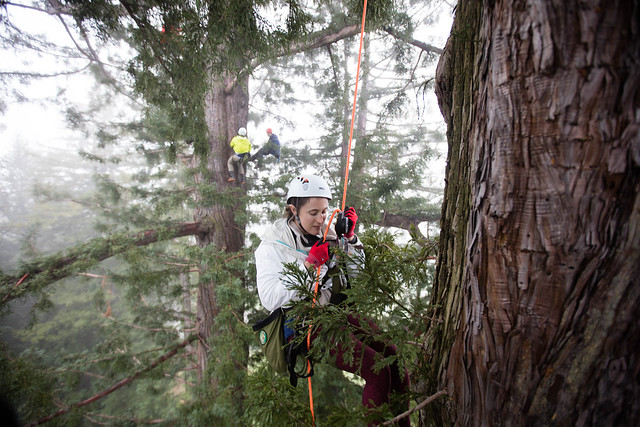 Photo by Steve LillegrenUp in the redwood canopy.

Yet for all the time I’ve spent among these bold, towering trees, the idea of scaling up to the top of one never crossed my mind. That changed a few weeks ago when I found myself climbing a 200-plus foot redwood in the Santa Cruz mountains, and now I can’t help but wonder when I’ll have a chance to climb another one.

I made my ascent with Tree Climbing Planet, an Oregon-based company that offers tree-climbing courses to beginners and experienced climbers alike. Tim Kovar, founder and master climbing instructor, had his own dramatic introduction to recreational tree climbing, though it didn’t involve redwoods.

Working as an arborist back in the ‘90s, Kovar was invited to a tree climb hosted by Tree Climbers International, the world’s first school and organization for recreational tree climbers. Prior to the climb, he “wasn’t aware of people out there climbing trees for fun.” When he arrived, he found people of all different ages and backgrounds eager to get into the trees. In particular, he was struck by two older women joining the climb. “I’m in awe,” he says, referring to that day. “They are tapping into their inner child… They hadn’t climbed a tree in 60 years, and had assumed they wouldn’t climb a tree again in their life.”

He was also touched by the quick connections people made with one another, as they shared their stories about climbing trees as children. “I’m on the ground,” he explains, “and internally I’m in tears, because I’ve never seen this type of camaraderie.” From then on, Kovar was hooked. 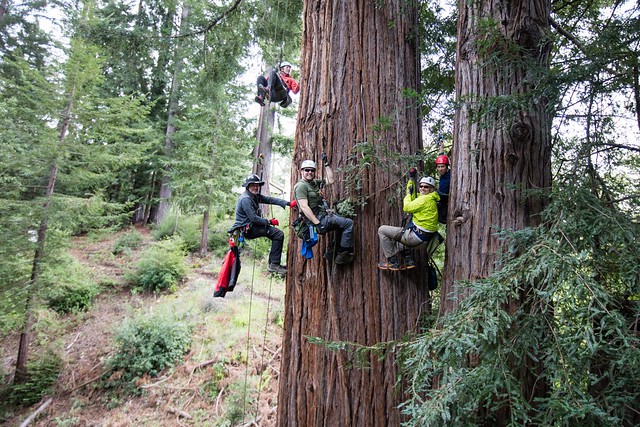 Photo by Steve LillegrenKovar leads a group of climbers as they begin their ascent in an adjacent tree.

Kovar’s passion for tree climbing came across as we prepared for the climb in the yard of a private residence in the hills. And his calm demeanor undoubtedly helped the rest of us keep our cool as we donned our climbing “uniform,” which included a sturdy and surprisingly comfortable harness, countless carabineers, and, of course, a helmet. (Kovar says the public isn’t allowed to climb trees on public lands like national parks.)

Geared up — and following a practice run hanging from the back porch — our small group, which included Kovar, Cameron Williams — a redwood biologist — photographer Steve Lillegren, and four other much less experienced climbers like myself, walked into the nearby stand of redwoods. I couldn’t help but look up, excited and still uncertain about what was to come.

The climb itself was no walk in the park. Essentially, it involved repeatedly standing up in our “stirrups” from a seated to standing position, gradually propelling ourselves up the rope — or as I like to think of it, doing hundreds of “reverse” squats. Luckily, it was impossible to be distracted by the burn. With each upward slide, I was a few feet higher in the tree. It was exhilarating.

It was also a bit nerve racking. Generally, I do quite well with heights, and hadn’t expected to sweat the climb. I had a short-lived love affair with rock-climbing back in college, I’ve hiked the thrilling Angels Landing Trail in Zion National Park, and I’ve spent my fair share of time on New York City fire escapes. But as I went farther and farther up the redwood, the dizzying heights became very real.

At several points, I became distinctly aware of just how dependent I was on the rope I was hanging from, realizing that I wasn’t all too certain how it had been secured in the tree. (It turns out, my instructors used a bow and arrow to loop the ropes high up in the branches.) I’ll admit that I even had a vision or two of the rope suddenly going slack. I tried to push these images from my mind, put my trust in the guides, and resist the urge to look down.

Intimidating as the climb was, my nerves were overshadowed by the incredible feeling of being in the trees. As we reached roughly 165 feet, we stopped to sit among the branches and revel in our luck. And I did feel lucky, not to mention thankful, for the experience.

More than the assent itself, our pause in the crown was what it was all about — the calm in the treetops. We were enveloped in a light fog, which added a surreal sense of seclusion and mystery to the experience as a light rain misted through the branches. 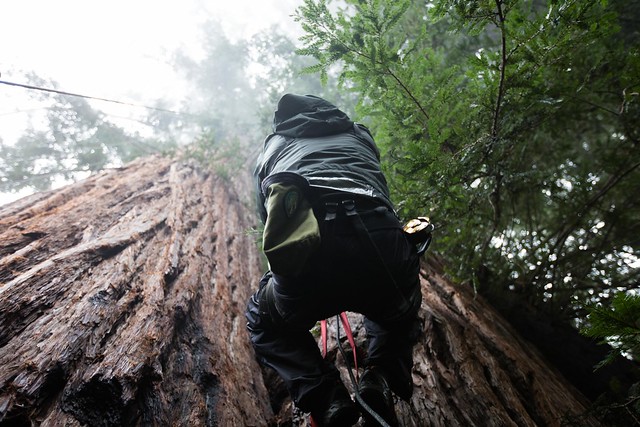 Photo by Steve LillegrenKovar promotes climbing techniques that are safe for both people and the trees.

The treetop rest also offered a chance to reflect on the tree, and the climb itself. I found myself wondering about the age of the tree I was in. Though it is difficult to determine the exact age of live redwoods, Lillegren, who was my guide through the climb, said that the tree we were in was at least 400 years old, and likely much older. The one across from us, where the rest of the group made their ascent, was likely 900 years old, perhaps approaching 1,000.

With Lillegren’s help, I was also able to spot some lichen, as well as younger redwood trunks sprouting from the branches of the tree we were climbing. I learned, too, that the ecology of the redwood shifts along with height. As Williams, the redwood biologist, says, you can “think about height in a forest canopy as a gradient from sheltered to exposed conditions.” Increased height comes with increased light intensity, wind speed, temperature swings, and frequency of wetting and drying, as well as decreased humidity. That means that what’s growing at the bottom of the redwood — like ferns and mosses — is less likely to be growing among the lichen that dominate in the upper branches.

I contemplated the impact of the climb on the trees as well. This, it turns out, is something that Kovar has spent quite a bit of time thinking about, and he assured me that he promotes “the safest techniques that are out there, not only for us, but for the trees as well.” This means not using spikes, which can damage the trees, and keeping the climb “on the rope, rather than on the branches.”

He concedes that tree climbing, like just about everything else, is bound to leave a footprint. “I don’t want to say we are ‘leave no trace,’ because that’s impossible,” he says. “When we are up there we scratch the bark, so we leave a trace… but we do that walking on the forest floor as well.”

He adds, however, that there are broader benefits to getting people into the trees. “As adults… we forget about the natural environment a lot of the time. But getting into a tree, safely, helps reconnect people to nature and gives them a new perspective on life, one they may have forgotten about.”

I don’t know if or when I’ll be able to climb a redwood, or any other large tree, again. But I do know that I agree with Kovar — climbing trees has a special way of connecting us to the natural world, as well as to our childhood, tree-climbing selves. It’s an experience I won’t soon forget, and one that I hope to share with others down the line.