For activists throughout the Gulf Coast 2015 is a year of anniversaries. It is the fifth anniversary of the BP oil spill; the 10-year anniversary of hurricanes Katrina and Rita as well as a BP refinery explosion in Texas City that killed 15 people; and 40 years since a massive influx of Vietnamese immigrants, who are now at the heart of the region’s fishing industry, began settling the region. And perhaps most notably the fiftieth anniversary of the march on Selma and the Voting Rights Act. 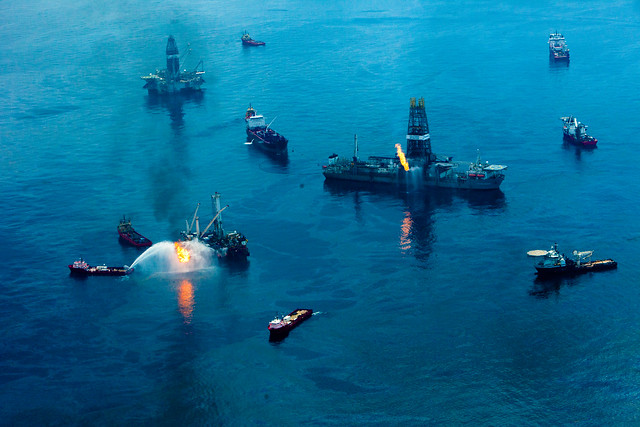 Photo by kris krügEverything from the Gulf Coast’s history and environment to its politics and culture is shaped by the energy economy.

To commemorate these historic events, communities across the region are organizing a series of actions under the banner, “Gulf South Rising.” According to the group’s website their aim is “to inform and engage Gulf South communities around the climate crisis and its impact on the region.” (The tagline for the group goes: “the seas are rising and so are we.”)

Tackling climate change is not easy anywhere but perhaps especially so in this part of the country. The Gulf Coast is in many ways the oil and gas industry’s stomping grounds. It was here after all that democratic senator Mary Landrieu made her last stand fighting for the Keystone XL Pipeline. It also happens to be one of the regions most vulnerable to the impacts of climate change, where sea levels are rising and coastal lands are vanishing. According to NOAA, every year an area off the Gulf Coast larger than Manhattan disappears due to subsidence and sea level rise.

Colette Pichon Battle, an attorney with the Gulf Coast Center for Law and Policy who grew up in south Louisiana, says that addressing climate change effectively means drawing connections between environmental impacts and people’s lives. At a conference called Bayou Rising in December 2014 — which in some ways was a precursor to this year’s region-wide campaign — Pichon Battle said her goal was to get people to say the words “climate change.”

Many of the people who live in these frontline communities depend on the oil and gas industry for their livelihood. Often the choice is one between a poorly paid service sector job or $30/hour on a rig. Everything from the region’s history and environment to its politics and culture is shaped by the energy economy. The region has a long legacy of negative impacts from the industry, including a “Cancer Alley” — the area between Baton Rouge and New Orleans defined by its heavy industrial development and high rates of cancer; the erosion of land caused in part by oil and gas canals and levees along the Mississippi River; and more recently extreme weather events like Hurricane Katrina. At the same time, the industry’s ties to the region’s political elites and power structure is formidable. New Orleans’ famous Jazz Fest, for instance is sponsored by Shell Oil.

Given these deep ties, you can’t just walk into these communities and say you want to stop drilling or ban fracking, Pichon Battle says. Rather you have to make connections between the relatively abstract idea of climate change on the one hand and the material transformations taking place every day on the other.

Still, one of the targets of the Gulf South Rising campaign is the extractive industry. Pichon Battle defines the term broadly to include the prison industry, education policy, and energy sector. She points out that Louisiana has the highest incarceration rate in the country, extracting people from their communities. Its charter school movement has been cited as a model for the rest of the nation but has left behind a generation of black and brown kids. And the Gulf Coast is in many ways the end of the line for the new energy economy based on unconventional oil and gas development — the Keystone XL pipeline carrying crude from the tar sands mines of Alberta, Canada would terminate in East Houston.

“What we hope to see are folks really identifying not just with environmental impacts, although that is a necessary part of this conversation, but with the intersectional reality here,” she says. That reality was perhaps most visible in post-Katrina New Orleans where race, poverty, and environmental devastation were intertwined. Pichon Battle says the storm spared no one. “We were dealing with straight up destruction across the board.” But the most interesting and also terrifying thing to observe, she says, was who got to recover.

Highlighting the challenges of confronting oil and gas development in the Gulf was one of the objectives of the Extreme Energy Extraction Collaborative’s recently-concluded summit in Biloxi, Mississippi. The fourth national gathering of its kind (previous summits were held in New York, Minnesota, and New Mexico), the summit’s aim was to bring together activists in frontline communities across the country to share their experiences confronting everything from fracking and uranium mining to mountaintop removal and tar sands extraction.

“It was a moving testament to the goodwill of frontline communities across the nation for meeting in the heart of Dixie and talking to people along the Gulf Coast who are this year commemorating or recognizing a lot of infamous anniversaries,” says Ramsey Sprague, a member of the Mobile Environmental Justice Action Coalition.

Earlier summits have focused on the anti-fracking campaign in New York, the issue of frack sands mining and oil and gas infrastructure in Minnesota, and the legacy of uranium mining in New Mexico.

“It made a lot of sense to shine a light on the Gulf Coast in terms of the energy paradigm in this country,” says Wes Gillingham Program Director of Catskill Mountainkeeper, one of the organizations behind the summit. He said the summit is not a formal coalition or membership-driven body but rather a way for activists and grassroots organizations to learn from each other as they address the impacts of the energy boom in their communities. “The whole collaboration is about people coming together and sharing their expertise with each other on how to address the impacts or to draw a line in the sand with industry, and really to start a national dialogue about shifting away from fossil fuels as fast as we can,” Gillingham says.

The Gulf Coast is not only the endpoint for much of the nation’s oil and gas, but also the site of an enormous investment in energy exploration and infrastructure development. Nearly half of the nation’s refining capacity is in the Gulf Coast. Not surprisingly there are plans to expand oil-by-rail terminals and networks. There are also several proposed oil pipelines that would carry shale oil from the Eagle Ford formation to nearby refineries. There’s a major push for a tar sands transport, storage, and export hub on Mobile Bay in Alabama. There are efforts to drill for shale gas in St. Tammany Parish, where Pichon Battle lives and works. And, of course, there are ongoing efforts to combat pollution and environmental degradation from decades of oil and gas development, the petrochemical industry, and recent storms.

But it wasn’t all doom and gloom. In fact, Gillingham says that it was the first time at the conference that there was a real sense that things might be beginning to shift. “What I witnessed was a synergy between the folks from across the region and the people that are dealing with similar impacts in different ways all across the country,” he says. “We weren’t just talking about how bad things were but what we can do about it.”

Pichon Battle says her greatest fear is that frontline communities will be left behind. Without the people who live and work in these communities anti-fracking initiatives or other environmental campaigns in the Gulf will have little hope of succeeding.

“Down here there’s enough generational terror for you to opt out of participating,” she says. “We’re pushing against that reality.”