Refugees from the lowlands are settling on areas reserved for livestock pastures, wetlands, and even river banks
Andrew Mambondiyani

Ernest Munyama, a small-holder livestock and crop farmer in eastern Zimbabwe’s Mpudzi Resettlement area, looks weary and apprehensive. His herd of cattle dwindling fast as grazing land is becoming scarce in this part of the country. Munyama blames the dwindling pastures on the ballooning number of people migrating from the region’s lower dry areas to the Eastern Highlands in search of good soils, water, and pastures. 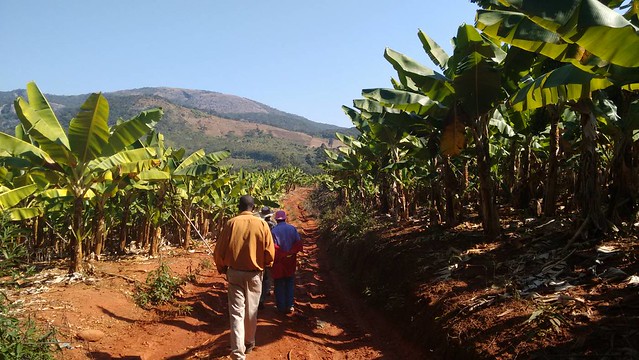 photo courtesy of Andrew Mambondiyani/Thomson Reuters Foundation A banana field in Zimbabwe’s Buma Valley in the Eastern Highlands. Increasingly unpredictable rainfall in the lowlands has led to an influx of climate refugees in the region.

Mpudzi Resettlement area is part of the country’s Eastern Highlands in Manicaland province which stretch from Nyanga district in the north down to Chipinge district in the south, along Zimbabwe’s eastern border with Mozambique.

In the past several decades, rainfall has become increasingly unpredictable in Zimbabwe and it has suffered through about 10 droughts since the 1980s. The last one was in 2015-16, was induced by an El Nino effect, which is caused by warming of ocean currents off the South American coast that leads to below normal rain patterns and above normal temperatures in specific regions of the world. In fact, according to the country’s meteorological department, Zimbabwe is now facing another climate change-induced drought in coming months.

Zimbabwe has certainly been feeling the impacts of climate change for while now. The country’s average daily temperature in the country has risen by about 2°C over the past century, according to meteorological reports and the country has. The rains have become so erratic in some parts of the country that the United Nations Development Program predicts that agricultural production could decrease by up to 30 percent. About 80 percent of rural Zimbabweans (nearly three-quarters of the country’s population) depend on rain-fed agriculture for a living, making them highly vulnerable to more extreme weather associated with climate change

The country’s Eastern Highlands, however, still have cooler weather conditions, good rainfall, rich vegetation and good soils — all of which is favorable to fruit and vegetable production. On account of these, the Eastern Highlands are turning into a melting pot with thousands of people migrating from the country’s drier areas.

The new farmers are illegally resettling on areas reserved for livestock pastures, on wetlands, and even on river banks, leading to rising tension between the newcomers and people legally settled by the government in the area decades ago. Fears abound that these growing tensions might escalate into bloody civil strife.

“These people (illegal settlers) have been causing a lot of problems for us. They are now occupying our grazing land and some are even settling on river banks,” Munyama said.

Munyama and other legal settlers were given land in the region by the government in 1981 as part of the first phase of Zimbabwe’s land reform program. The land reform program was spearheaded by the then president, Robert Mugabe, when Zimbabwe attained independence from Britain in 1980. The land was previously owned by the white commercial farmers.

With the swelling number of illegal settlers in the Eastern Highlands, which the government estimates at more than 20,000, some farmers are being forced to sell their livestock as they are running out of grazing land.

“We are now reducing our herds but the grazing area is still no longer enough,” Munyama said. He once had a herd of more than 20 cattle but is now left with less than 10. Many small scale farmers in this area depend on cattle as draught animals to till their fields and there are fears that they might be unable to feed them adequately.

“We use our cattle to plough our fields and with no cattle it will be a disaster for us all,” said

Leonard Madanhire, another local farmer. “We are appealing to the government to address this problem of illegal settlers before it escalate into serious conflict.”

Last December, the country’s Minister of Lands, Agriculture and Rural Resettlement, Perrance Shiri, had ordered illegally settled farmers across the country to vacate the land immediately, but that doesn’t seem to have had much effect. One of the new settlers in the Eastern Highlands, Matthias Taengana, has vowed to stay despite calls to leave. “I am not going anywhere, this area is my only hope of survival,” he said.

It remains to be seen whether the government will take action to remove the illegal settlers.
A new report by the World Bank revealed that by 2050 the worsening impacts of climate change in three densely populated regions of the world could see more than 140 million people move within their countries’ borders. The report which focused on sub-Saharan Africa, South Asia, and Latin America warned that unless urgent climate and development action was taken, these three regions could be dealing with a combined total of over 140 million internal climate migrants by 2050. “These people will be pushed out by droughts, failing crops, rising sea levels, and storm surges,” the report noted.
But there is still hope. The report says that with concerted action, including global efforts to cut greenhouse gas emissions and robust development planning at the country level, this worst-case scenario could be dramatically reduced, by as much as 80 percent or 100 million people.

Climate researcher Makwanya says that the people living in the drier areas would benefit from learning how good water management practices, such as rainwater harvesting.

Additionally, “what these people from dry lands need to be taught is to engage in other sustainable agricultural activities such as animal fattening, poultry, rabbit or piggery production and many others that do not require the services of large amounts of water, including honey production,” he said.

Makwanya also stressed that people in the Eastern Highlands need to be educated on ways to avoid small-scale conflicts because, these are likely to happen, when the land become scarce.

Andrew Mambondiyani is an independent journalist based in Zimbabwe with a special interest in climate change, agriculture, sustainable development, human rights and the environment in general.