Grooming the Next Generation of Farmers

Many urban centers in Upstate and Western New York have a stronger reputation for blight and struggling post-industrial economies than for innovation and vibrant food production. However, two organizations — VINES and the Massachusetts Avenue Project — are looking to change that, capitalizing on vacant urban spaces to build sustainable community food systems and train tomorrow’s young farmers and environmentalists. 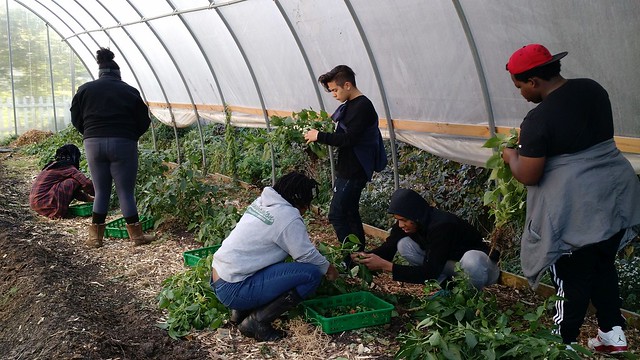 Urban farming has been increasingly gaining attention for its trendy aesthetic and as a means of improving access to healthy food in cities across the US. But the debate continues regarding whether this niche farming model can be implemented on larger scales as an economically viable practice while reducing food deserts and improving public health. With an aging population of farmers, increasing demand for local organic food, and growing urban population, a new generation of farmers and innovators is needed. And the youth faction driving the urban farming movement provides some hope.

Situated on the confluence of the Susquehanna and Chenango Rivers, Binghamton is home to VINES, which stands for Volunteers Improving Neighborhood Environments. Having just celebrated its tenth anniversary, VINES is well known throughout the Binghamton community for its impressive community garden initiative, which by 2020 will add eight more gardens to the area, for a total of twenty. Truly embodying the “V” in VINES, the 11th and 12th gardens were completed with massive volunteer support, according to Kaitlyn Sirna, VINES’ community garden and youth program manager. The 12th garden marks the first outside Binghamton, and is located in neighboring Johnson City. Once the notorious Binghamton winter passes, the nonprofit will be breaking ground on several more.

VINES’ youth program is equally noteworthy, employing roughly 20 high-school students each summer for a six-week immersive educational and professional experience. The student demand to partake in VINES’ summer youth program far exceeds capacity, but a handful of participants are selected to return each year in leadership positions. And one 2013 summer crew member even returned as an AmeriCorps volunteer.

The youth program is oriented around VINES’ downtown urban farm, but the scope of the training extends well beyond fieldwork. In addition to a comprehensive understanding of composting and crop rotations, youth participants develop skills in resume writing, financial literacy, and interviewing for jobs. Sirna stressed the importance of these real-world skills, noting that “our youth program students are building confidence and a commitment to environmental justice in their very first job”. Although youth participants are training as young farmers, the majority will not have careers in agriculture. Still, they will carry their ecological knowledge and community service experience with them to inform their future pursuits.

But youth aren’t the only ones involved. Anyone who has gotten their hands dirty during a Thursday volunteer harvest knows the extent of community buy-in, with seniors, neighbors, and SUNY Binghamton students all pitching in. And VINES will take all the help it can get, as the organization works to expand its half-acre flagship farm to over 2-acres.

Heading west to the shores of Lake Erie, the Massachusetts Avenue Project (MAP) boasts an impressive patchwork of gardens throughout Buffalo’s Westside. MAP’s youth enterprise program employs a crew of approximately 30 high school students each summer, and 20 part-time student workers during the academic year. A significant portion of the youth participants reflect the Westside’s diverse population of immigrants and refugees, who bring their own cultural food practices to MAP and Buffalo’s urban farm community. The summer program sees these 30 students employed in a 6-week program using organic and permaculture practices on the 1.5-acre urban farm. Students also develop their own social enterprise related to their work on the farm, and connect with local business and retailers, such as Wegmans, to sell value-added products. One such product, MAP’s raspberry apple salad dressing, saw the students do everything from testing recipes to packaging, distribution, and marketing.

Diane Picard, MAP’s Executive Director, emphasizes a teach- and learn-by-doing approach. “The students are involved every step of the way – from seed to plant, and plant to market,” she says.

It’s no surprise that many of MAP’s youth participants remain involved with the pioneering organization when the summer ends. And, the achievement of a handful of current youth participants in particular stands out. Rebekah Williams, MAP’s Youth Education Director, brought six Buffalo high school students to the annual “It Takes a Region” conference this November, put on by the Northeast Sustainable Agriculture Working Group (NESAWG) in Baltimore Maryland. MAP’s very own youth participants led a workshop focused on climate justice, engaging participants in how the food system affects climate change and how youth can get involved in addressing their community’s needs.

Like VINES, MAP has ambitious plans for expansion that match the flood of community support. The construction of a commercial kitchen and community food center, which will provide space for nutrition workshops and on-site food processing, is under way on the Westside.

There are still plenty of barriers to entry for aspiring organic farmers, especially for inner city youth. Both VINES and MAP are providing important skills and training for future farmers and community leaders, but what makes their work special is that it’s helping put marginalized communities in charge of their food futures. Through their extensive and accessible garden networks, subsidized produce, and mobile markets, VINES and MAP bring gardening and fresh, healthy food to the communities they serve.