Green Sprouts in the Canadian Arctic

Ben Canning, a student at Toronto’s Ryerson University, comes from a farming family in southern Ontario. “As a kid growing up, I thought everybody had access to fresh food,” he says. But this is not the case, he found out, even in Canada. Back in 2013, he heard for the first time how people in the northernmost territory of Nunavut are almost 70 percent food insecure, that is, they don’t always have physical and economic access to sufficient, safe, and nutritious food, especially vegetables, to meet their dietary needs.

Photo by Derrick MidwinterPeople in the remote Canadian Arctic territory of Nunavut, where the land isn’t aerable, suffer from severe food insecurity.

The costs of transporting food to this remote region in the Canadian Arctic, especially fruit and vegetable produce, is high — about two or three times more expensive than in Toronto to the south, and the dropping Canadian dollar only drives costs higher, to C$10 for a head of iceberg lettuce or C$13 for four apples. Food flown or shipped to the far north can also lose nutritive value by the time it gets there. For Canning, the answer to this problem is to grow vegetables in an igloo greenhouse in Najuaat, a community of about 1,000 people in Nunavut.

Canning calls the project, which he launched four years ago along with fellow-student Stefany Nieto,“Growing North.” The greenhouse has been built on land provided by a community member, fuelled by thousands of dollars in donations and fostered by entrepreneurial knowhow from Enactus, a group that aims to raise living standards through entrepreneurial action. In the first two years of Growing North, Canning assembled a group of like-minded students to set up the community infrastructure and to construct the geodesic dome, shipped from Colorado but delayed in sea ice for a month. 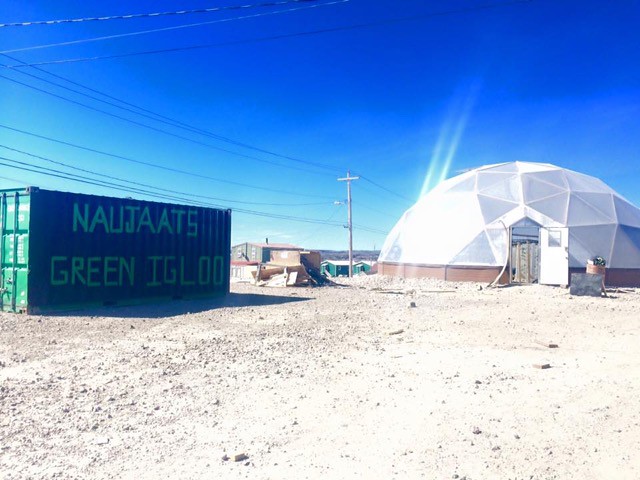 Photo courtesy of Growing NorthThe 42-foot growing dome, built in modular sections, can handle seven feet of snow and winds up to 110 miles per hour.

The 42-foot growing dome, built in modular sections, can handle seven feet of snow and winds up to 110 miles per hour. In fact, a foot-and-a-half of snow fell during the later-than-planned construction in October 2015. The community donated tools and manpower, a boon when a $65 drill in Toronto costs $450 in Nunavut. Besides weather, the group faced the skepticism toward a white man “fixing” Natives’ problems, a complete lack of knowledge among the local people about how to grow plants, and a construction site inspection by three Arctic wolves.

The following spring, Canning and his team installed hydroponic growing towers inside. Growing vertically increases crop yield by four times. The reflectors on the dome cover captures heat from the sun, which is stored in a big black-lined tub of water that warms the greenhouse up to 30 degrees higher than the temperature outside. In this land of ice and snow, where even in summer temperatures can be as low as 0 degrees Celsius, a garden cannot exist outside. But here the sun shines up to 24 hours a day in the summer. The dome only needs four hours of sunshine a day to heat it, so the system currently works for seven months of the year. The greenhouse, nicknamed the Green Igloo by locals, has the capacity to grow 2,000 plants and could potentially provide thousands of pounds of fresh produce at half the cost of importing them. 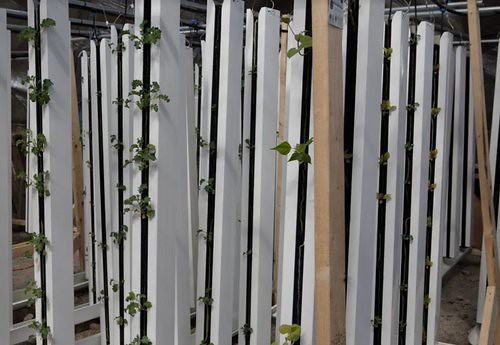 In June 2016, the first crop ready was kale, toasted and presented as a replacement for regular chips, “a huge hit.” It was the first time anyone in Najuaat had ever eaten a vegetable grown locally because farms and gardens cannot exist in the far north. Sniffing at a seedling in its hydroponic tower, six-year-old Louisa announced that it “smells like sunshine.”

“We were able to climb the learning curve with our greenhouse managers and they were able to have a few successful harvests all by themselves” this past summer, Canning says. There was one paid position and a volunteer group of 10 to 15 people who planted seedlings, managed the water balance on the hydroponic system, and gathered the harvest. Lettuce, kale, tomatoes, radishes, peas, beans, broccoli, and herbs were distributed for free to 30 households “as a show of good faith” during the first learning and testing year of the Green Igloo.

The greenhouse was shut down for the winter on November 1, but this year the plan is to run it all through the cold months using a CHP (Combined Heat and Power) system, which will generate heat and electricity. This will increase the amount of food grown, and enable the Green Igloo to be part of the curriculum (co-written by Growing North) at the local Tusarvik School during the winter. The goal for next summer is to make enough fresh vegetables available at an affordable rate to cover the operational costs of the greenhouse.

Canning and his business partners are now planning a second growing dome in the Nunavut community of Arviat on the western shore of the Hudson Bay — home of Inuk singer Susan Aglukark. Depending on funding, the project could be built within the year. It’s a critical time for food security in the north because in one generation, as they tried to assimilate with mainstream Canada, many Inuit communities have lost their ability to live off the land solely from hunting and fishing, and have gone from “igloos to microwaves.” The shape of the Green Igloo builds on ancient knowledge of withstanding weather in a harsh climate, but brings new technology to help the community grow its own food, increase health and wellness, education and employment in the far north.