In Timor Leste law, a small country in Southeast Asia that achieved its independence from Indonesia in 2002, shark hunting is illegal, but that didn’t prevent a China- based company from sending vessels out to the country’s waters recently to illegally catch thousands of sharks. 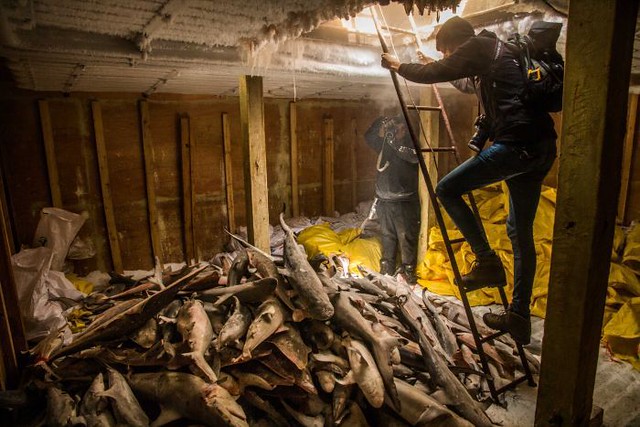 In September, the ocean conservation group Sea Shepherd, working with local police in Timor Leste, caught 15 vessels filled with thousands of sharks using gill nets to scoop up the bottom feeding sharks, some of which are internationally protected as endangered species. Banned from hunting for sharks in Indonesia’s waters, these shark-hunting vessels prey on Timor Leste, an impoverished country with no resources to patrol or regulate their waters.

The company that owns the vessels, Pingtan Marine Enterprise, is listed on the United States NASDAQ, and has been banned in the past from fishing in Indonesian waters. The company did have fishing licenses from the Timor Leste government, but not for shark hunting. These large hauls threaten the country’s fishing supply and marine ecosystem.

The same fleet of illegal shark fishing vessels were caught in August 2017 in a restricted marine sanctuary near the Galapagos Islands that has one of the greatest abundance of sharks in the world. That, and the limited resources of Ecuador and the Galapagos National Park to patrol the waters, have made it a target for illegal shark hunting.

Though the crew was arrested, the private company still thrives on breaking international laws to feed the demand of the shark fin industry.

“Developing countries such as Timor Leste are prime targets for exploitation by developed nations’ fishing fleets. This is largely down to the limited or lack of marine enforcement assets and training/knowledge into illegal, unreported, and unregulated (IUU) fishing,” says Gary Stokes, Asia director of Sea Shepherd.

Illegal, unreported, and unregulated fishing accounts for up to US $23.5 billion worth of fish caught worldwide every year. In other words, 1 in every 5 fish that you can buy at the store was probably illegally caught. This kind of fishing robs, often poor, coastal communities of vital sources of food and income and damage marine environments. International cooperation and alerts are key to fighting these and some such efforts have been bearing fruit.

“Interpol launched Project Scale to combat IUU fishing and has a program where Interpol will send a team to train local authorities in data collection, investigation etc,” Stokes says. “Countries have come forward to sponsor assets but this often comes with strings attached. The root of the problem comes down to having a political will to protect their environment and resources and having a government in place which has a hard line and a firm handle on corruption. Internationally, I feel it will come down to NGO’s working with governments as the NGO’s have no state interests.”

Stokes was also skeptical about reports showing that there’s been a dip in shark fin trade. “Many NGO’s have recently been quoting statistics and claims that the trade for fins is down, however personally as someone who has been working closely monitoring and exposing the shark fin industry I would disagree,” he says.

Demand for shark fins (and other shark products including meat and liver oil) has driven numerous shark populations toward extinction. According to the International Union for the Conservation of Nature’s Red List of Threatened Species, nearly 30 percent of the world’s shark species are threatened, or near-threatened, with extinction. Some species, such as the white tip shark and the scalloped hammerhead shark, have lost 98 percent of their numbers to industrial fishing during the past 60 years.

The main driver for shark fishing, however, is the huge demand for shark fin soup, which is a traditional Chinese delicacy. A bowl of shark fin soup can cost up to $100; a pound of shark fin can sell for more than $300. Up to 73 million sharks are killed annually to support the global shark fin trade, reports the Pew Environment Group, which is fostering efforts to establish shark sanctuaries. Shark-finning is a wasteful and cruel practice during which a shark’s fins are sliced off and the remainder of the animal is thrown back into the sea. Without fins, sharks bleed to death, drown, or are eaten by other species.

The fear surrounding sharks as predators has contributed to treating shark species across the board as expendable. The loss of this key marine predator has already been having an impact on ocean ecosystems.

Explosions in jellyfish populations, that sharks tend to eat as dietary staple, are becoming common in seas across the globe. Bottom feeding rays that sharks eat have wiping out other bottom feeders like oysters and scallops in areas where sharks have been depleted. Wiping out predators has a cascade effect to the rest of the food chain in the ocean, and its overall health. These species have thrived in ocean systems for 400 million years, but human poaching and the shark fin industry are driving them to extinction.

Stokes says that despite prolonged, widely-publicized campaigns by environmentalists, trade in shark fins is as big as ever and sharks are still under serious threat.

“We must remember that it is not just the fin industry that everyone likes to focus on, it is also the other industries that are growing that utilize sharks,” says, pointing to the shark meat industry, as well as the growing popularity of cartilage pills and liver oil capsules.

“When it comes to China’s stance, the government knows that this is a big issue and it does not give China a good image internationally,” he says. The Chinese government is against IUU fishing and upholds its international responsibilities over vessels that are flying the Chinese flag that break international or national laws. As I keep saying, these fishing vessels are owned by a private company, in this case listed on the US NASDAQ. They shame China by breaking the laws for the benefit of profits for their shareholders only. We are hoping that China will exercise all of its power to bring them to justice.”