Give a Hoot, Don’t Pollute

California Parks are urging campers to clean up after themselves, in a novel effort to protect the endangered marbled murrelet
Sena Christian

When campers register at the headquarters of Big Basin Redwoods State Park in the Santa Cruz Mountains of California, they receive the usual trail map and, for the past couple years, instructions on how to be “crumb clean” and why this matters to the fate of the endangered marbled murrelet, a seabird about the size of a robin.

California State Parks launched its “keep it crumb clean” campaign to educate visitors about the importance of never feeding wildlife and picking up after themselves. The campaign has been propelled forward by a 2014 lawsuit settlement agreement with the nonprofit Center for Biological Diversity, which had claimed the government was failing to protect the bird under its new general plan for Big Basin. The planned expansion of public uses and infrastructure in the bird’s habitat exacerbated the species’ risk for extinction, according to the lawsuit. 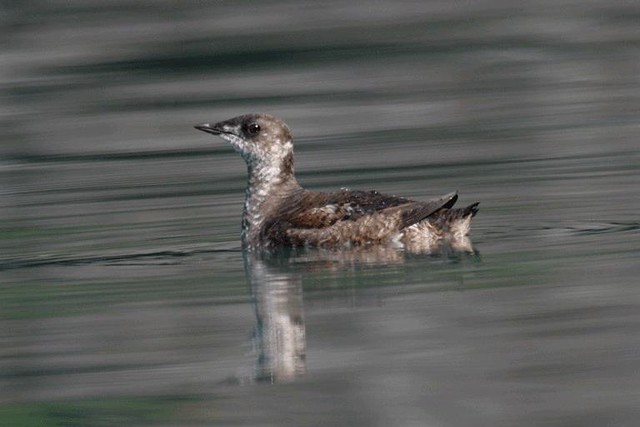 Photo by USFWS The planned expansion of public uses and infrastructure in the marbeled murrelet’s habitat exacerbated this small seabird’s risk for extinction.

“Education is such a big part of the solution,” says Shaye Wolf, a wildlife biologist and the climate science director at the Center for Biological Diversity. “Most park visitors would be heartbroken to learn their trash is contributing to the decline of this beautiful, endangered seabird … What we’re trying to do with the settlement is educate and increase public participation in the solution.”

The marbled murrelet’s low reproductive rate makes it especially vulnerable. A mature female lays only one egg high in the mossy branches of ancient coast redwoods (or other conifer such as firs) that stretch up the Pacific coastline from central California into Oregon, Washington, and as far north as Alaska. The parents take turns incubating the egg and flying miles away to the ocean to eat herring, smelt and anchovies and then returning to feed the nestling. A mere month or so after hatching, a chick will make its first flight to the ocean. That is, if it survives till then.

Murrelets face a mighty foe in corvid predators — mainly Steller’s jays and ravens that are intelligent enough to know food follows humans. When these birds finish foraging around people, they notice murrelet nests high in the trees and attack the eggs and chicks. Jays are a natural part of the forest ecosystem, and murrelets evolved under their predatory pressure. But the corvid’s population has exploded throughout the park, along with the once-rare raven that is now a common sight.

“Whenever there are people, there is food, and whenever there is food, there will be animals taking advantage of that,” says Portia Halbert, the environmental scientist with State Parks who oversees the “crumb clean” campaign in the Santa Cruz Mountains. Some 1.5 million people visit Big Basin State Park each year. An estimated 400 to 600 murrelets exist in the entire Santa Cruz mountain range.

‘Enigma of the Pacific’

Designated as a park in 1902, Big Basin is California’s oldest state park and covers more than 18,000 acres ranging from sea level to 2,000-foot-high mountains. Old-growth coastal redwoods found here are among the tallest and oldest trees on Earth, dating back 1,000 to 2,500 years. Of the ancient forest that once dominated the area, less than 5 percent remains.

Murrelets — once called “the Enigma of the Pacific” — were among the last birds in North America to have their nest found by people, with the first case documented in 1974 in a Douglas fir in Big Basin. Murrelets are unusual among seabirds in that they nest in inland forests. In 1992, the bird was listed as endangered under the California Endangered Species Act; the same year it was listed as threatened under federal laws. 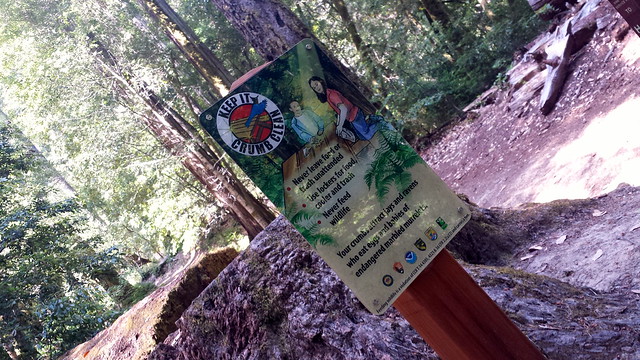 Photo by Sena ChristianMurrelets are unusual among seabirds in that they nest in inland forests where they face a
mighty foe in corvid predators — mainly Steller’s jays and ravens that are intelligent enough
to know food follows humans.

Commercial logging of old-growth forests, wildfires and windstorms are all menaces to murrelets. Climate change has emerged as another threat as more-frequent El Niño events have changed ocean conditions, negatively affecting the availability and quality of the murrelet’s food. Additionally, a 2010 University of California, Berkeley study found that coastal fog has declined by one-third from a century ago, which means fewer seedlings mature into towering trees because coastal redwoods receive much of their water and nutrients from fog.

As if these threats weren’t worrisome enough, the murrelet has campers’ leftovers to worry about. Big Basin has around 200 campsites, which are often booked solid on summer weekends. “The camping is concentrated in the best, last, high-quality nesting habitat for murrelets,” Wolf says.

Every camper gets the same spiel when registering at the campground headquarters and an instruction sheet that spells out the following: “Never leave food, coolers or trash unattended, including pet food, paper plates, bags and wrappers or candles. Store all food and smelly items in your car or in the metal food lockers even if you are away for only a short time. Properly dispose of all trash, even crumbs, bacon grease and other food scraps. The fire ring or the bushes are not proper places to dispose of trash.”

“We take this very seriously,” a park aid tells me during a visit in July. He points to the penalty amount highlighted on the sheet: up to $875. As I sign the trash-pickup commitment form, he casually issues a warning sure to invoke fear in the many visitors who love coming to Big Basin. “If we don’t reduce the numbers of jays and ravens, State Parks might have to close down parts of the campground,” he says.

Standing there, I can’t help but think of “Niwot’s Curse,” attributed to Southern Arapaho Chief Niwot, who is rumored to have warned: “People seeing the beauty of this valley will want to stay, and their staying will be the undoing of the beauty.”

Because of the unusual nesting habits of the marbled murrelet, biologists have struggled to implement management actions that will have a direct, measureable effect on the bird’s recovery. But State Parks had some low-hanging fruit to pick.

When Halbert started working on murrelet conservation in 2000, the campgrounds used round, metal trash cans without lids — easy access for hungry critters. State Parks has since upgraded to animal-proof cans and dumpsters and installed animal-proof food storage containers at campsites. It used to be that campers routinely left out coolers, raccoons opened them, squirrels spread the food all around, and then birds came swooping in. “It’s like they were working in concert,” Halbert says. Garbage pickup has also increased from once a week to twice a week during the busy season.

Meanwhile, the government employed Carolyn Ward, a sociologist who authored a study on reducing theft of petrified wood at Petrified Forest National Park in Arizona, to analyze its marbled murrelet conservation program. Ward found that personal conversations between park staff and campers were most powerful, but too expensive.

So it came down to the crumb, Halbert says, noting that while the National Park Service has been educating visitors about not feeding wildlife for a long time, “We found that a lot of it was unintentional feeding.” She launched the “crumb clean” campaign in 2012 with funding from money the state received from settlements related to oil spills along the coast during the past two decades. Since 2012, the local jay population has fallen from nine times more in the campground area compared to outside the area, to around 1.5 times. “I’m not sure we can get much lower than that because these birds are opportunists,” Halbert says.

Another approach involves painting small chicken eggs to resemble a murrelet egg, and injecting them with the chemical Carbocal; jays eat the eggs, get sick and vomit. Halbert’s team does one egg deployment in early spring and again three weeks later. They’ve found that far fewer eggs are eaten during the second deployment. “Much like going to a restaurant that makes you sick, you never want to go back,” she says.

While Halbert says many of these efforts were always part of the master plan for the murrelet, now staff is working with concrete deadlines due to the lawsuit settlement. The agreement includes three key, binding measures: environmental education and outreach; a comprehensive trash management plan; and regular monitoring and oversight of the bird population.

“By and large, State Parks has done a good job implementing most of the protective measures in the settlement agreement,” Wolf says, while noting that the agency has fallen behind on installing dishwasher basins in the bathrooms. Currently, campers wash their dishes at outside spigots and crumbs fall onto the ground, where corvids congregate. The basins are scheduled for installation this fall.

State Park Ranger Alex Takone says he has heard mainly positive reactions to the new rules among campers, partly because a cleaner campground has resulted. Last year, at least 34 citations for violations of the food storage ordinance were issued, along with numerous warnings. “I had one family flag me down this year and tell me that I had cited them last year for leaving food out,” Takone says. “They said they were being much better this year and being extra careful, which is the point of enforcing these rules: enact a change in human behavior in order to better protect the marbled murrelet.”

Halbert says there’s hope that the species can turn the tide as groups such as State Parks and Save the Redwoods League purchase tracts of second-growth redwood forests, which in the next hundred years or so can provide additional habitat for murrelets. But, in the meantime, it’s up to people to be more conscientious while in the park, Wolf says: “I’m hoping if people take more ownership and responsibility, this is an opportunity for their actions to be part of the solution.”

Note: Steller’s jay was mispelled in an earlier version of this article.