Too often, reporting on food and agriculture treats science as a singular source of truth
Maywa Montenegro de Wit and Alastair Iles

It’s been a rotten spring for glyphosate. On March 20, the World Health Organization announced that it was officially classifying the herbicide — the most widely used farm chemical in the United States — as a “probable” cause of cancer. Days later, the American Society of Microbiology linked glyphosate and two other herbicides to antibiotic resistance, the low-boiling public health disaster. And then a well-known skeptic scientist tried to downplay these findings, deepening the crisis: Appearing on the French cable channel Canal+, Dr. Patrick Moore told interviewers “you can drink a whole quart” of the herbicide “and it won’t hurt you” — but then refused to take a swig. “I’m not an idiot,” he said. 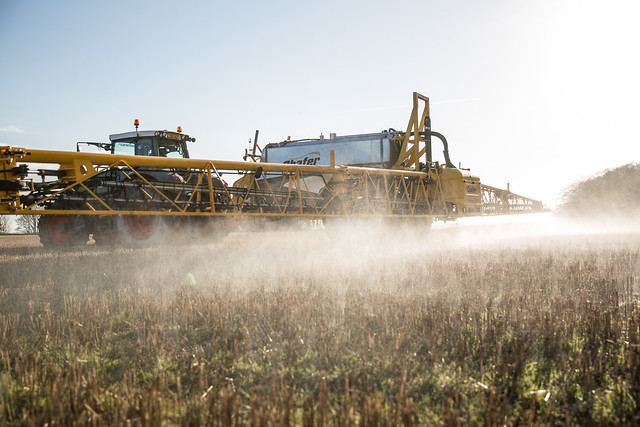 Photo by Chafer Machinery A crop-sprayer applies glyphosate to a field in North Yorkshire, England .

For many casual observers of these events — and certainly for folks in the ever-growing food movement — glyphosate had finally tipped the scales from ‘bad idea’ to unconscionable. If the collapsing of monarch populations, the evolution of spray-tolerant weeds, and the pollution of soil, water, and farmworker bodies was not enough to dethrone the king of agrochemicals, then maybe the specter of cancer and antibiotic resistance would.

It was all the more remarkable, then, to see just the opposite reaction spelled out in one of our country’s most reputable publications. In an April 10 New Yorker piece, well-known science writer Michael Specter went to bat for the chemical industry, declaring that the WHO report should change nothing about popular use of glyphosate. Why? Because while it could be dangerous, it is not proven to be. “Scores of studies,” he noted, have found “no connection” between glyphosate and cancer. What’s more, the handwringers would have us believe that all GMOs and their companion chemicals are to blame for troubles spanning cancer to autism. These critics just don’t understand science, he implied.

Not to pick on Specter per se, but his latest piece provides a valuable entrée into thinking more critically about scientized reporting, where and how the data gets drawn, and the human-made imperfections inherent to science.

Scientized reporting often fails to appreciate the nature of the regulatory science process. It’s not about proving with absolute certainty that there is, or isn’t harm. Rather, because there are gaps in scientific knowledge, assessors look at whether there’s a preponderance of evidence that tips the scale in one direction. There are always judgment calls, and these don’t make the process biased. In the recent glyphosate case, the International Agency for Research on Cancer, an arm of the WHO, released what amounted to a complete assessment of all the evidence available in the scientific literature and in publicly accessible government databases. To achieve this, the agency set up a 17-person committee comprised of top scientists representing 11 countries; these scientists worked for a year to review the evidence. In other words, the assessment isn’t comparable to just another study, and IARC isn’t just another body of experts — it represents some of the most credible and respected technical expertise in the field.

Scientized reporting may also misapprehend how to read (and report) risk. If anything, IARC was conservative in its appraisal. Their write-up states: “There was limited evidence of carcinogenicity in humans for non-Hodgkin lymphoma. The evidence in humans is from studies of exposures, mostly agricultural, in the USA, Canada, and Sweden published since 2001. In addition, there is convincing evidence that glyphosate also can cause cancer in laboratory animals.” That is, there are suggestive — but few to date — studies showing a higher rate of blood cell tumors in farmers and workers. Yet numerous studies have looked at what happens when mice, rats, and marine organisms including starfish are exposed to glyphosate: cancer. It occurs often enough, anyway, for the IARC to change its classification from ‘possible’ to ‘probable.’

This upward shift may seem semantic, but it is significant. Aaron Blair, an IARC scientist interviewed by Specter, even explains to him what probable means: “‘Probable’ means that there was enough evidence to say that it is more than possible, but not enough evidence to say it is a carcinogen.” But these details are buried under Specter’s own italics and a heavy dose of framing as he writes, “[The panel] concluded that glyphosate could be dangerous…. But how concerned should we be, exactly?” Could, possible, probable — these words are all the same in the conflated language of reporting risk.

More concerning still is the quality of evidence used to rebut the IARC. The “scores of studies” that Specter points to finding “no correlation” between glyphosate and cancer? Curious readers who clicked through the original story’s hyperlink would have found themselves looking at a 2015 review article whose second (and corresponding) author works for Monsanto, the company that manufactures Roundup. Industry-funded appraisal should be taken with a grain of salt, and should be disclosed honestly and upfront.

Finally, there is what we call “undone science,” science that has not been conducted for one reason or another. In the case of pesticide research, most toxicologists and environmental health experts have had few incentives to investigate risks in humans due to Monsanto’s dominance in the biotechnology arena and the US EPA’s now-flawed regulatory science finding in 1991 that glyphosate is “safe.” The assumption has therefore been that it’s unnecessary to probe further. Moreover, human subjects are difficult test subjects; proposals to test pesticides on willing people have been rejected on ethical grounds. The challenge is to follow human populations or groups (e.g., farmers in a village, or laborers on a farm) for long enough to discern whether there is in fact an increased risk of developing cancer (or another illness) due to extended chemical exposure. When such research has been done, it’s often shown that glyphosate exposure correlates with a higher likelihood of some types of cancer.

On a larger level, like other reporters who eagerly invoke ‘science’ to support their accounts, Specter, we suspect, doesn’t comprehend the nature of science. Unfortunately, he speaks from a vaunted soapbox, yet has long reported on issues of food, technology, and environment in a way that fundamentally misapprehends (and misconstrues) what science is and does. In the case of genetic engineering, he frames the critique as unscientific, pitting activist anxiety against a rational, empirical, ‘true’ science.

Scientized writing treats science as a singular source of truth regarding nature, without acknowledging its human-made character. But science does not spring from the earth objective and value-free. Scientific knowledge — including scientific knowledge about uncertainty — is shot through with social relationships. It’s shaped by human agency and cognition, cultural habits, social norms, and political power. What type of research gets funded (and what doesn’t)? How are questions asked? Whose evaluations count? What seems to be ‘natural’ and ‘objective’ science often emerges as a set of path-dependent processes, in which history matters, and science is a political dance. These forces are all, unfortunately, glossed over in many mainstream media accounts of science in agriculture.

In Specter’s glyphosate article, we are left with an impoverished assessment of choices — glyphosate or substitution of more poisonous chemicals — rather than a fuller understanding of alternatives, such as biodiversity-based farming systems. Yes, it is true, as Specter says, that nothing can be proven categorically ‘safe.’ But amidst ample (scientific) evidence of evolving weed resistance, damage to pollinators and other wildlife, and toxicological impacts on humans both near and distant, we might also ask how many strikes glyphosate is allowed before it counts as ‘unsafe.’

Science writers can improve greatly on scientized writing by learning more about the nature of regulatory science and the complex reasoning that underlies appraisals of risks. They can pay careful attention to who is funding or shaping scientific studies, rather than making glib references to claims that turn out to endorse only industry views. What’s more, science writers can do a real service by identifying cases of undone science and tracing out how these limit our current understanding of risks.

We may not yet know whether glyphosate causes cancer, at what rate, or at what dose. What is increasingly substantiated, however, is that adoption of GE (‘Roundup Ready’) crops and their companion chemicals is part of an agricultural system that tends to erode agricultural biodiversity, create widespread water, air, and soil pollution, and undercut the core ecological processes that sustain food production. Bad for farmers, bad for eaters, not so great for the planet either. In other words, the IARC report, far from telling us that nothing should change only adds to the weight of evidence that is long past the threshold of precautionary.