A number of environmental organizations, Western Watersheds Project, The Buffalo Field Campaign, and Friends of Animals, have petitioned the US Fish and Wildlife Service to list the Yellowstone bison under the Endangered Species Act (ESA). Some may be baffled why any bison deserve listing under the ESA when there are at least 500,000 bison found in North America. 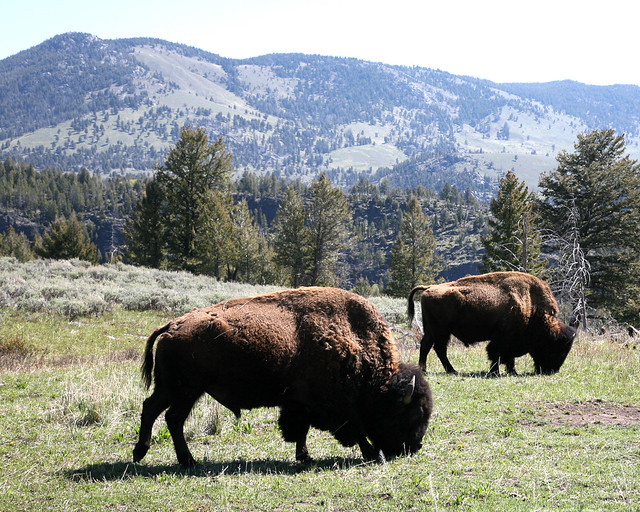 Photo by Jitze CouperusThe Yellowstone Park sub-population of bison has been subjected to severe slaughter and culling as part of an effort to prevent transmission of brucellosis, a bacterial infection, to cattle.

Here’s why. The Yellowstone Park sub-population of bison has been subjected to severe slaughter and culling as part of an effort to prevent transmission of brucellosis, a bacterial infection that can sometimes cause cattle to abort their first calf post-infection. There is a lead wall (made of bullets) that attempts to bottle bison up in Yellowstone Park when they migrate to lower elevations outside of the park in search of food during harsh winters.

In addition to the direct killing of animals by Montana Department of Livestock, park rangers, and hunters, bison have also been captured and slaughtered.

In recent years, more than a thousand bison have been killed near the park borders as the bison attempted to migrate out of the park. In 1996-1997, culling of Yellowstone bison removed 57 percent of the entire northern subpopulation and 20 percent of the central subpopulation.

The proposed listing would use a feature of the ESA called a Distinct Population Segment (DPS) designation. DPS permits the FWS to protect unique populations of a species that may have special conservation significance.

In the case of the Yellowstone park bison, its conservation value is both significant and unique. The bison in Yellowstone Park are free of cattle genes. Most other bison herds have some degree of hybridization with domestic livestock.

Furthermore, Yellowstone’s bison are the only known bison population that has been continuously wild (though for a few years they were fed hay in the Lamar Valley to build up their numbers). This is particularly important as Bozeman wildlife biologist Jim Bailey argues in his book American Plains Bison—Rewilding an Icon, Yellowstone’s bison are genetically unique.

There are only four sources of bison without cattle genes, the Henry Mountains of Utah (the bison here were originally transplanted from Yellowstone), a private herd in New Mexico and in Canada. However, the largest cattle-gene-free bison herd is in Yellowstone.

Despite this obvious rarity, the US Fish and Wildlife Service has denied two previous petitions to list the Yellowstone bison under the ESA. The new lawsuit asks the FWS to do a full review of the bison, especially in light of new genetic and other scientific evidence suggesting the Yellowstone bison population is both genetically unique and threatened by ongoing culling and slaughter.

Ironically this slaughter continues despite the fact that the bison was recently designated our “national animal.”

There are hundreds of thousands of bison being raised commercially in the United States. However, these herds are treated like livestock. That is, they are bred, artificially fed, inoculated, and slaughtered for their meat.

Apart from these, there are 44 “conservation” bison herds in the US, numbering about 17,000 animals. These conservation herds, though more wild than commercial herds, still have a significant degree of animal husbandry. Most reside behind fences, and typically experience some artificial population control through culling and hunting. And many herds are small and likely suffer from genetic inbreeding and genetic drift.

Even herds with as many as 2,000 to 3,000 animals will lose about 5 percent of their genetic diversity over a hundred-year time period according to Bailey. Only two of these herds exceed 2,000 animals, with Yellowstone possessing the largest number. And even the herds in Yellowstone have gone through a genetic bottleneck when in the late 1800s the park’s bison population went down to as few as 25 animals.

The lives of Yellowstone’s bison were, until recently, largely affected by natural selection. In other words, bison died from disease, predators or starvation without interference from humans. These natural evolutionary processes have produced the wild bison we have today in Yellowstone.

As most people know, for more than two decades now, bison migrating from Yellowstone National Park have been killed to prevent the spread of brucellosis. Ironically, the disease was originally introduced into North America via imported domestic livestock.

The Brucella bacteria can cause what is known as undulant fever in humans. Efforts by the federal government to control brucellosis in cattle was originally justified and funded as a public health issue. However, the most common way humans get infected is by eating or drinking unpasteurized or raw dairy products. (When sheep, goats, cows, or other livestock mammals are infected, their milk becomes contaminated with the bacteria.)

While breathing in the bacteria that causes brucellosis may also lead to infection, according to the Centers for Disease control, this poses a risk mainly for people in slaughterhouse and meat-packing facilities and in laboratories that work with the bacteria.

In other words, with the advent of widespread pasteurization, the human health threat has largely been dissipated.

As part of this control effort, all sources of brucellosis are considered a threat to the industry. Since a percentage of the wild bison in Yellowstone carry the disease, as do elk and other wildlife, the livestock industry and the Montana Department of Livestock (DOL) has effectively lobbied Congress to force the control of wild bison by hunting or capture and slaughter.

But the truth is, the likelihood of transmission of this disease from bison to cattle is exceedingly small. So small that not one example of bison transmission of brucellosis to livestock under natural field conditions has been documented. However, a number of examples of elk transmission have occurred.

In fact, neither bison bulls, yearlings, or calves can transmit the disease, though that hasn’t stopped the Montana Department of Livestock from killing thousands of such animals. Only bison cows are likely to transmit the disease. Despite the lack of evidence that bison pose any risk to livestock, more than 6,000 of Yellowstone’s bison have been slaughtered in one fashion or another since 2000.

For cattle to become infected with brucellosis a host of unusual circumstances need to exist.

Cattle have to come in contact with live brucellosis bacteria. The proposed means of transmission typically would involve the abortion of an infected fetus by a wild bison. However, this is rare in the wild because an infected cow bison usually reabsorbs an infected developing fetus before it can be aborted.

Most abortions of fetuses in wild bison occurs between February and May — at time when domestic livestock are not found on the public lands adjacent to Yellowstone Park.

Even if aborted, the bacteria must remain active. Since the brucellosis bacteria is sensitive to heat and dehydration, and/or the fetus is consumed by coyotes, ravens, and other scavengers, live bacterium don’t usually last long in the environment.

Next, assuming there is an aborted fetus and the bacteria is still alive, a domestic animal must come along and lick the dead fetus or birthing fluids.

For this to happen, there has to be physical geographical overlap between bison and cattle. Since bison typically migrate out to lower elevations in the winter, and move back into the higher elevations of the park for the summer, there are few cases of actual physical overlap.

The transmission of brucellosis from wild bison to cattle has never been documented, and as explained above, the chances for transmission, while not zero are effectively insignificant.

Furthermore, there are livestock management options that further reduce the threat. For one, most of the public lands grazing allotments outside of the park are no longer used by domestic livestock as a result of permit retirement and other means. So the opportunity for geographical overlap is small.

In addition, there are vaccines for brucellosis that can reduce significantly the chances of infection even if cattle are exposed to the bacteria. However, these are not required of all cattle herds.

In addition, as previously noted, neither bison bull, yearlings, or calves can transmit the disease, yet these individuals are regularly killed. And despite the fact that all known cases of brucellosis transmission from wildlife to livestock has been attributed to elk, there is no similar slaughter or curtailment of migratory elk.

The real reason the livestock industry fears wild bison is that bison and cattle have similar diets. The industry fears that the public might demand that wild bison should have priority when it comes to grazing public lands.

The last remaining wild bison herd large enough to be evolutionarily significant resides in Yellowstone Park, yet the state of Montana has repeatedly shown an unwillingness to accept wild bison moving outside Yellowstone. Instead they are using artificial means of population control that are artificially selecting against the wild genes of the animals.

As with wolves, grizzly bears, spotted owls, sage grouse, and other species that impinge, or even appear to impinge upon, traditional economic interests, the state governments in the West are incapable of managing such controversial species due to the political pressure from local industry and politicians. This is why the Endangered Species Act was created, and why we need it now to save Yellowstone’s wild bison. The ongoing tragedy is too reminiscent of the earlier attempt to wipe out wild bison on the plains as a means of controlling Plains Indians.

Only the courts can force the federal government to do its legal obligation to protect Yellowstone’s wild bison and stop the shameful slaughter of an American icon.