The invasive species narrative is always the same: non-native species are bad, native species are good, native species must be protected from invasive ones or they’ll inevitably suffer and decline. But reality is often more complicated, and a recently-published study from the Galapagos Tortoise Movement Ecology Programme provides a surprising new take on the relationship between one famous endangered species and the invasive plants that have become established in its ecosystem. 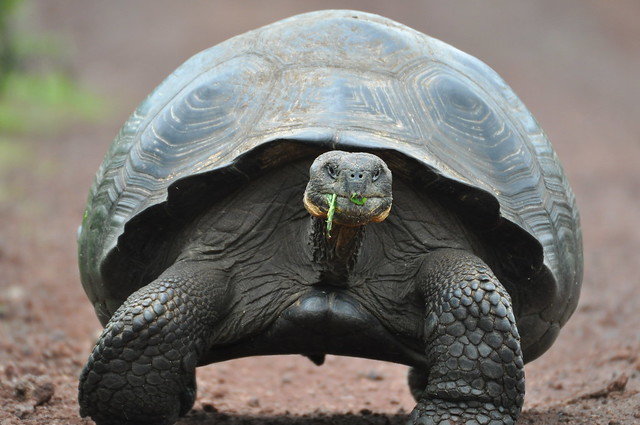 Photo by Amaury Laporte The new study found that the giant Galapagos tortoise may actually benefit from certain invasive plants.

Few animal species are more universally known and loved than the giant Galapagos tortoise. Though threatened by a long history of exploitation by humans for food and by habitat loss to agriculture, today the iconic tortoises are doing better than at any time in the last 200 years thanks to conservation efforts by Galapagos National Park and the Charles Darwin Foundation. Among the management challenges faced by conservationists in the region has been the more than 750 non-native plant species that have become established on the islands. But this new study shows that for the tortoises, many introduced plants, including some that are considered invasive, aren’t a problem at all — in fact, they might even help.

Dr. Stephen Blake, lead author of the study, and other researchers from the Galapagos Tortoise Movement Ecology Programme knew from casual observations and conversations with locals that non-native plants were likely an important part of the tortoises’ diet on Santa Cruz Island. During a previous study conducted in 2009-2010, Blake and his colleagues found that every year, tortoises on the island migrate between arid lowland areas and lusher upland areas. The upland regions are dominated by introduced plants, and the researchers realized the tortoises would only make this annual trek if they were finding plenty to eat there. To test their ideas, the scientists followed tortoises through the bush and recorded every bite they took during ten-minute bouts, noting what species they were eating.

“It’s more challenging than it might sound,” says Dr. Blake of working in the Galapagos. “Standing and watching giant tortoises, it’s not like tracking down polar bears on foot, I suppose, but because we want to collect data through all seasons in all locations, the field work can be pretty arduous…. The Galapagos is actually a quite inhospitable environment in which to work, lots of old lava flows, lots of loose boulders, lots of prickly stuff, and lots of hot, sweaty days.”

But the long, hot days in the field paid off when they were able to confirm that tortoises were not only eating invasive plants, they were thriving on them. Over half of all recorded bites the tortoises took were of non-native species. The animal’s weight and the results of blood tests used to assess health suggest that tortoises are not being harmed by this diet and may even be benefitting from it.

Blake explains the tortoises’ preference for introduced plants over natives with an analogy. “You and I eat Honeycrisp apples and we don’t eat crabapples,” he says. “There’s a good reason for that — Honeycrisps are big and they’re sweet and they’re juicy and they give us good nutritional value, and a crabapple tastes horrible and bitter and isn’t very nutritious. It’s really just the same with these giant tortoises with many introduced food plants that they eat.” Why would tortoises choose to eat the island’s native guava plant when the domesticated guava that’s been introduced to the area has bigger and sweeter fruit?

Of course, there are more than 750 non-native plant species established in the Galapagos, and not all of them are beneficial to tortoises and other native wildlife. Elephant grass, introduced as cattle fodder, forms dense, extensive stands in the highlands that grow six to 10 feet tall, displacing food plants and blocking tortoise movement; blackberry goes “on the rampage” in wetter, more humid areas, according to Blake, forming impenetrable thickets and transforming habitats.

Still, the results of this study are good news overall for land managers in the Galapagos. “The highlands of some islands have been transformed, and they’re almost certainly never going to be un-transformed,” explains Blake. Attempting to eradicate established invasive species can quickly become an enormously expensive and labor-intensive undertaking, and if many of the Galapagos Islands’ non-native plants are harmless for the archipelago’s most iconic species, it’s one less headache for conservationists in the region to contend with.

According to Blake, future priorities for tortoise conservation include keeping their migratory corridors open and ensuring their continued access to the highland areas where edible non-native plants are most concentrated. However, Blake also notes that just because tortoises have adjusted to the presence of non-native plants doesn’t mean all Galapagos wildlife can. “Tortoises are mobile generalist feeders that can adapt; specialist species and those that are outcompeted by introduced species are in dire straits, so what may be okay for tortoises remains extremely detrimental for the islands ecosystems overall.”

Interactions between native and invasive species can provide other unique management issues. For example, in recent decades, the barred owl, originally native to the eastern half of North America, has been moving westward. This range expansion, which is probably related to habitat changes caused by humans, means that barred owls are entering the range of the endangered northern spotted owls and competing with them for nesting sites and prey. Managers have struggled with how to approach the situation, and controversially, the US Fish and Wildlife Service began shooting barred owls in known spotted owl nesting territories in 2013. (Read more about the efforts to save the spotted owl here.) And in the Chesapeake Bay, NOAA considered deliberately introducing Asian oysters, a non-native species that filters pollutants more effectively than the native variety, and which managers believed could benefit the local ecosystem. NOAA and other agencies involved eventually decided that the risks outweighed the potential benefits.

As humans continue to alter habitats around the world, more scenarios will likely emerge that challenge the “native is good, introduced is bad” paradigm. But thanks to Galapagos tortoises with a preference for juicy guava fruits, we know that at least once in a while, these stories may not be all bad.