From India: An Urban Gardening Model That Could Help Keep Cities Cool

My grandmother has two passions — reading and gardening. At one point, we had over six different varieties of tress in our house and our corridor stood lined up with plants. Not that we had a big house. It was less than 3,000 square feet, but thanks to my grandmother, our house was green and beautiful. I was a very inquisitive child. I remember asking my grandmother for the names of every plant we had and the flowers that bloomed from them. One of the trees with tiny white flowers was my favorite. At the onset of dawn, dozens of sparrows congregated at this tree in our courtyard and would wake us up. In the afternoons, I would come back from my school and play with clay in our backyard. My grandmother and I would often nap outdoors in the winter sun. Life in my childhood was slow, but it was close to nature and enriching. 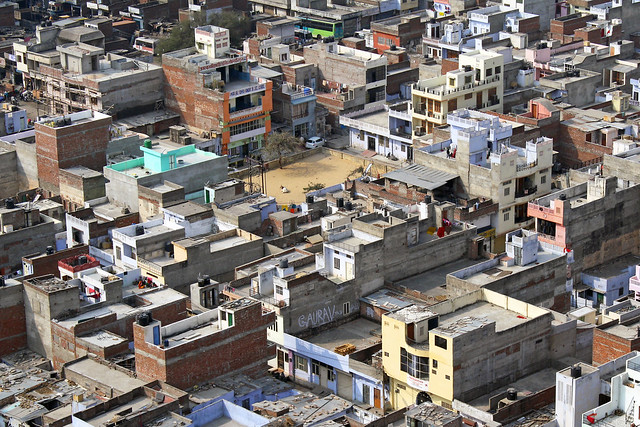 Twenty years later, our life barely resembles the one of my past. Four out of the six trees we had are gone and the corridor full of plants has halved. As the family grew, we needed to optimize our space and our old house with its beautiful courtyard has turned into an apartment building. Other houses around us have suffered the same fate. The sunlight no longer reaches our home because of all the tall buildings that have sprung up around us. The sparrows are gone. There are no fruits growing in the backyard and there is no winter sun to sleep under. My grandmother is certainly not very happy about this and I am very worried.

The rampant urbanization of India, increasingly visible in the form of changes in our monsoon patterns, gives me pause. There seems to be little that we can do to preserve our environment in the face of “progress.” What’s even more disturbing is how dangerously flawed our food system has become. Industrialization of farming has made it expensive for small-scale farmers. Untested and costly farming technologies are being forced on our farmers and they are increasingly living under debt. In hopes of getting rid of the debt, farmers exceed all permissible limits of using chemical fertilizers and pesticides on their crops. Some of them even inject chemical fertilizers into the vegetables to make them look attractive so that they can be sold at a higher price. Others, desperate for water for irrigation, resort to using filthy gutter water or water contaminated by toxic industrial effluents to grow vegetables. (Nearly 85 percent of India depends on groundwater for its drinking needs and water tables across the country are falling at an alarming rate of 13 feet a year). It’s beyond doubt that all this is having a direct impact on our health.

I feel a great sense of urgency and responsibility to talk about these issues and warn people about the food they are eating as well as seek out alternatives. Which is why I was intrigued when I heard about Prateek Tiwari and his organization, The Living Greens, that is promoting the idea of low water-use, rooftop, organic farms. This idea fits so well with our urban lifestyles. After all, while few people have space for a garden, every house does have a roof. The idea could potentially be transformational. So I set out for the northwestern city of Jaipur to meet Tiwari and make a short film about their venture for Project Survival Media (an Earth Island Institute Project.)

The morning I reached Jaipur, I rushed over to see Tiwari’s farm. The Living Greens’ office is in the basement of an apartment complex in the heart of the city. The farm, obviously, is on the rooftop. I was amazed to see the variety of vegetables growing up there. Eggplants, corn, chillies, peas, mint, parsley, bitter gourd, pumpkins and even melons — Tiwari was growing it all in the 3,2000 sq foot space. Compared to other barren rooftops around, this roof was green and full of life. Just the kind of rooftop I would like to have. A rooftop garden that size can produce about 120 kg (265 pounds) of vegetables a year, Tiwari said.

Tiwari spoke to me about how he came up with the idea of rooftop organic farms. “Most of the cities are suffering from direct impact of climate change. We felt that if we could develop a natural green cover on the rooftop, we could save the exposed rooftops from the sun,” he said. “And while we were working on that problem we realized that a solution for climate change or a solution for saving the rooftops could also save the health of the people who are living in that building.”

The Living Green co-founder Kailash Sharma, an agricultural engineer by training, briefed me about technical aspects of their farming model. I was skeptical about whether the roof could hold the weight of the big planter units, but Sharma assured me that the portable organic farming kits the company had developed uses a new kind of soil-less medium, lightweight and leak proof containers with a sub-surface drainage system, and a drip irrigation system which waters 100 plants with just one bucket of water. The weight of these kits isn’t a big burden for the roofs to bear.

The next day, I met with the some of the other Living Green staffers at their basement office to gauge how they felt about the work they were doing. It was interesting to see how the team has defied space to grow plants. Living walls covered most of the wall space.

Lory Jain, the company’s marketing officer, told me about how, when she first interned with The Living Greens, the institute she was pursuing her business degree at told her they couldn’t give her credits for her work because they didn’t see it as a viable business internship. Jain fought with the college authorities to get her work acknowledged, and won. After she finished her course, she came back to The Living Greens to pursue her passion. I was in awe of the determination this young girl had to do something unconventional.

Indeed, unconventionality and determination seem to be the driving force of The Living Greens. Take Tiwari and Sharma, for instance. Both are agricultural engineers from one the finest universities in India. Tiwari spent 10 years working for big corporations, including Wal-Mart. He had a promising career in the corporate world. But, through his work he learned about the problems in our food supply chain and it started to disturb him deeply. Wanting to do something meaningful to address these flaws, he quit his job at Wal-Mart, roped in his friend, Sharma, and started to develop their rooftop organic farming model.

Later in the day, I met with Tarun Bansal, a hotelier who has set up a food garden on this hotel rooftop. At the hotel, I was welcomed by a beautiful bonsai garden and parrots. It was amazing to see parrots in Jaipur in the burning hot and dry month of June. Groundwater, which accounts for over 90 percent of Jaipur’s drinking water is declining at the rate of nearly 20 feet per year. By some estimates, the city risks running out of water by 2016 if there are no proper monsoons or planned interventions to recharge the water tables.

“What attracted me [to The Living Green model] was that it uses a soil-less medium and uses minimal water,” Bansal told me. “I think it’s a very practical decision now to protect our resources and more than that, to protect our livelihoods and protect our businesses and to see them reach the next generation or generation beyond.”

Bansal is an optimist. His ability to appreciate simple solutions is inspiring. Rooftop organic farming indeed seems very simple and easy. So why aren’t more people adopting this solution? I asked Bansal about this. He said while he absolutely loved the idea, the set up (soil-less medium, drip irrigation system etc) was still too expensive for most people. The project would have to receive some government subsidies in order to be scaled up. As of now, only 25 percent of Jaipur homes are expected to adopt the model in the next four years.

I wondered why would any government not support it. So I called Rebecca Mathai, head of the International Centre For Environment Audit and Sustainable Development, a new federal government-run institute that seeks to improve accountability and governance of environmental conservation and sustainable development efforts in India. Mathai said that the Indian government is increasingly realizing the importance of initiatives like The Living Greens, but she also said that currently there is no mechanism to support such initiatives.

While this is frustrating, it sets the premise for civil society to play a bigger role in demanding that the Indian government support the development and adoption of these technologies and make them affordable by all.

Shooting this short film introduced me to an innovative idea, which was practical and highly scalable. It helped me understand various aspects of the project and how people and government, in general, felt about it. And above all, it showed me how simple ideas can bring big change.